10 Amazing Gardens You Absolutely Must See Before You Die

As the poet Rudyard Kipling said, “Gardens are not made by singing ‘Oh, how beautiful,’ and sitting in the shade.” Years of thought and strategy are lovingly – and sometimes agonizingly – devoted to planning and care.

I was the garden editor for The New York Times Home section and still write about landscape design for Cultured magazine and elsewhere. I have been exposed to some of the most spectacular gardens in the world. When Flower Power with Jill asked me to report on the 10 best examples – the bucket list for those who delight in the aesthetics and design of gardens – I had almost too many choices. After much thought, here are my Top 10. – Linda Lee

There is Yves Klein Blue, and then there is Majorelle Blue, a sun-saturated color, instantly recognizable, especially in contrast with the often seen yellow in the garden. Majorelle was the home and studio of the artist Jacques Majorelle until his death in 1962 and reflects 40 years creating this oasis in the heart of Marrakesh. Yves St. Laurent and Pierre Berge discovered the garden on their first trip there, in 1966, and campaigned to rescue it from developers. 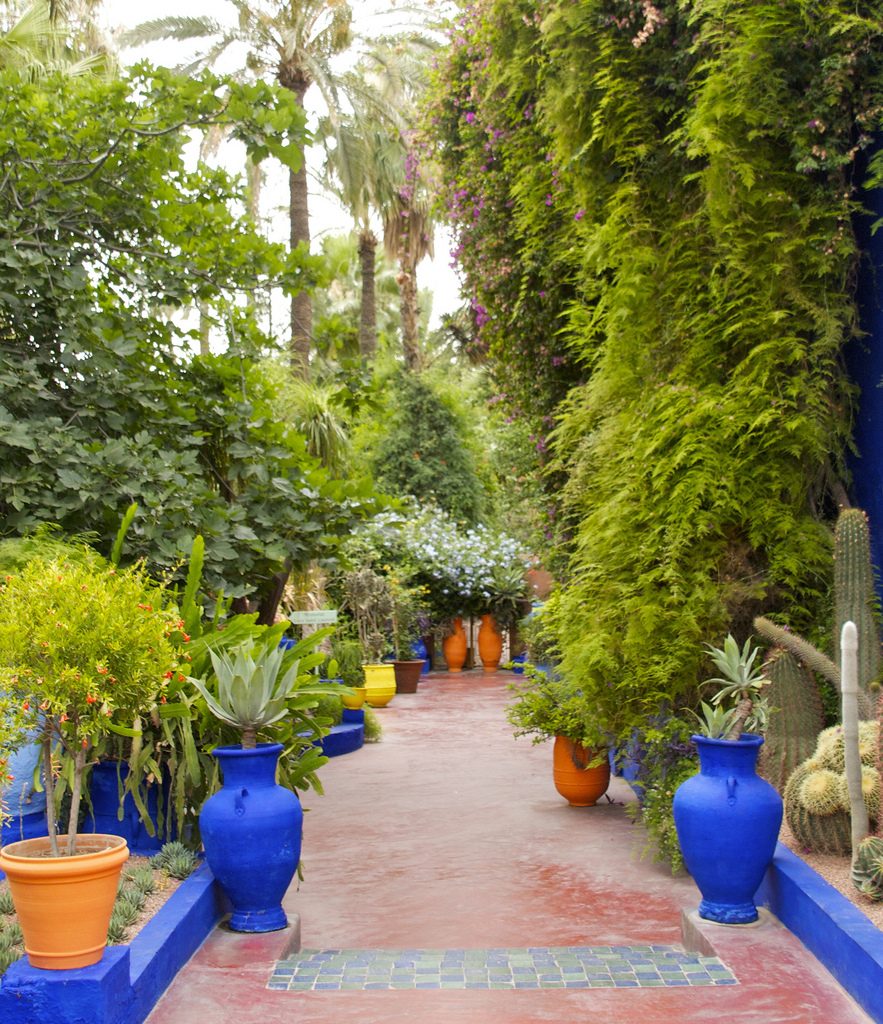 In 1980 they bought the garden, made a house next door their home and turned Majorelle’s studio into a museum of Berber design. They expanded the garden, more than doubling the number of plant species. What you see today is part Jacques Majorelle and very much St. Laurent and Berge. Some 700,000 people visit the two-and-a-half-acre garden every year. So should you. It’s not Kew. It’s intimate and personal. The garden is not in the walled city, where cars are rare and donkeys are the main mode of transportation. It remains apart from the busy, buzzing modern city.

Ippolito II d’Este wanted to be Pope. Failing that (five times!) he built a pleasure palace on a terraced hill overlooking the ruins of emperor Hadrian’s villa, and began stripping the travertine marble Hadrian’s workers installed 1300 years earlier. D’Este diverted a river, had workers make his hillside higher, and hired experts to run pipes and create systems (he used water like electricity to create a bird-song organ) that astound experts even today. 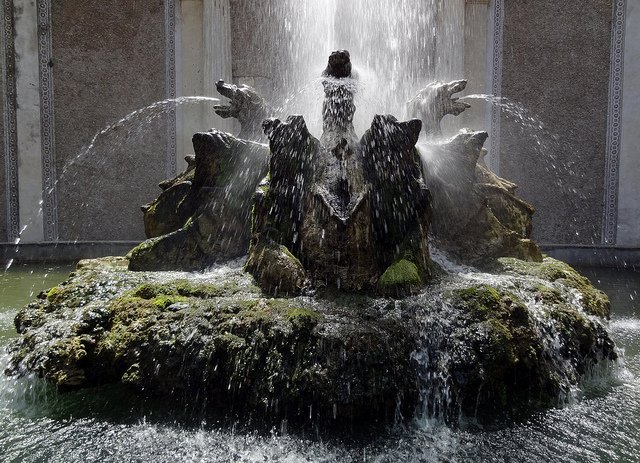 One walkway has 100 fountains, offering Villa d’Este, planned in 1550, that era’s version of air conditioning. The elaborate fountains, grottoes, ponds, statuary, staircases and frescoes were never all completed, even after many generations, but what remains has inspired just about every formal garden or fountain to be built since, and hundreds of Romantic artists as well. I was there with my husband before we were married and have never forgotten it.

Let other people look at rows of fountains and acres of statuary. If you want to see flowers, come here. On these 55 acres are some of the most beautiful gardens on earth. The gardening began in the early 1900s, when Jennie Butchart decided to start tilling the ground in the exhausted quarry in her back yard across from her husband’s cement plant. Top soil arrived by wheel barrows, and flowers began to grow. 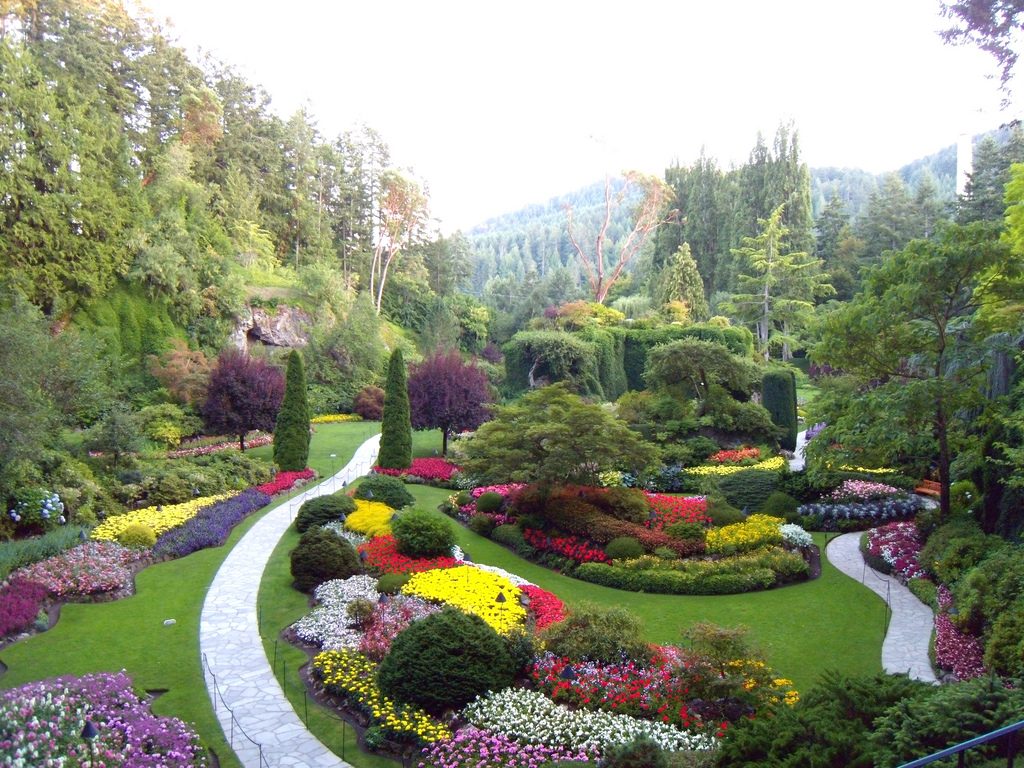 First a Japanese garden, then she talked her husband into letting her turn their tennis court into an Italian garden. Then came the rose garden, trees, paths through meadows. In 1939 they gave the property to their grandson, Ian Ross, and serious development began. Today there are a million bedding plants, in 900 varieties, flourishing in Vancouver’s surprisingly mild climate. Regarded by horticulturists as a masterpiece, this is a garden to put at the top of your bucket list. Even at night the garden comes alive with a spectacular light show. It owes a bit to Disney, but the Japanese tourists are agog. Better than Ginza!

First there is the setting: against the eastern slope of Table Mountain. Be prepared to hike. Here at Kirstenbosch National Botanical Garden you will find proteas, ericas and restios, agapanthus species and hooded pelargonium (a cousin of the geranium). 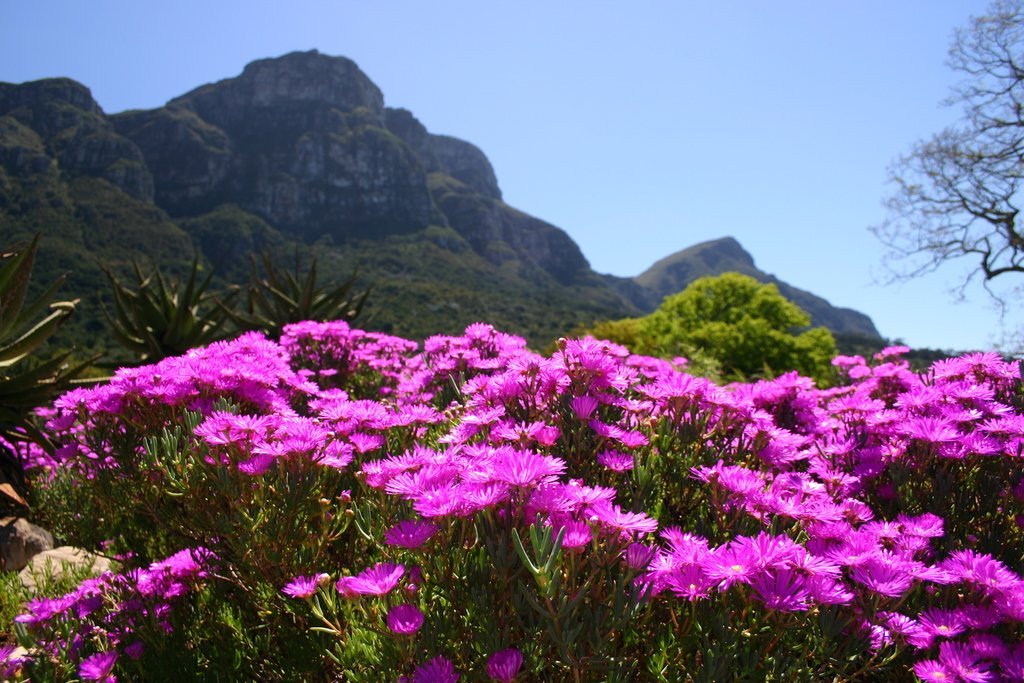 The lists of sweetly scented flowers you have never seen before will astound you: Golden pagoda, the yellow star saffron bush (which releases its scent at night), wild freesia, belladonna lily, spicy cone bush, small num num. The list goes on. January is the height of summer blooms. You will need a book with good pictures because many of the species will be new to you. Even better, hire a good guide. 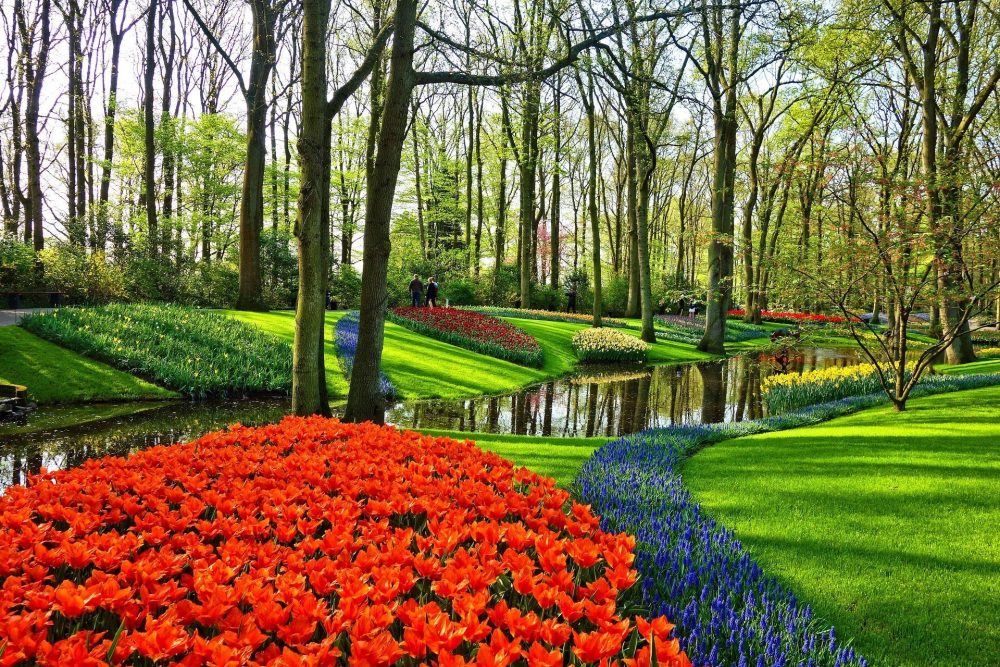 Keukenhof Lisse In The Netherlands

It is said that everyone needs to see once in a lifetime, so get on it. Seven million tulip bulbs are planted, in artful combinations with squill, hyacinth, jonquil, among trees, woven around waterways, separated by clipped lawns. The bulbs bloom from mid-April to mid-May in what may be the largest pleasure garden in the world. It feels like a dream, a candy-colored world, and it can be hard to go back to city life. Do this. 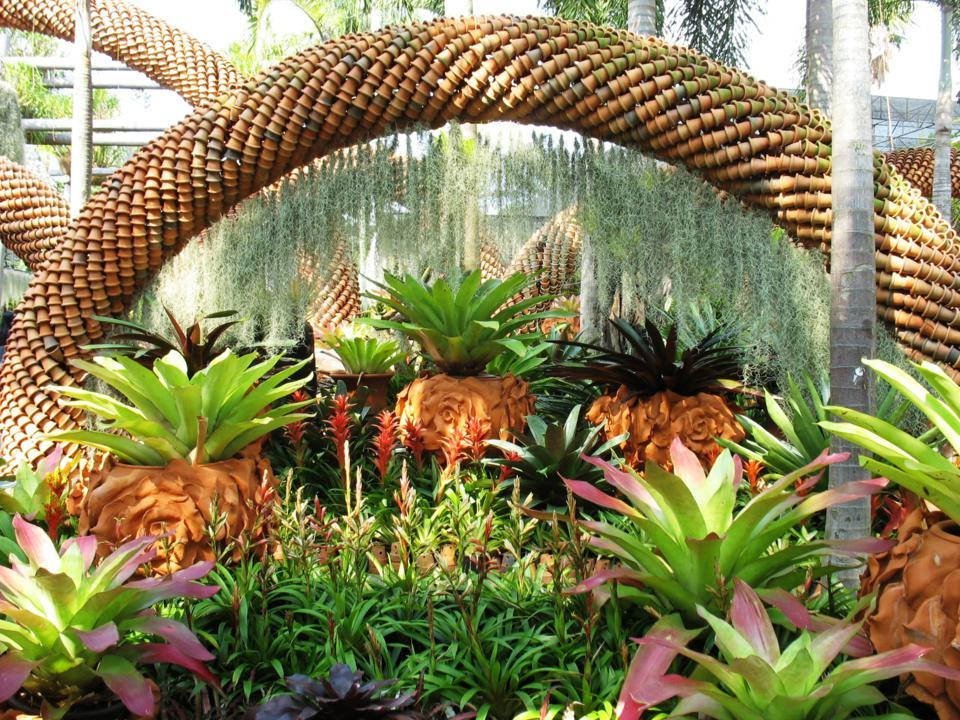 For serious garden lovers, it is imperative to get away from the kitsch and the elephant sculptures that make Nong Nooch more Disneyworld than serious garden. Remember that it is 500 acres, and once you move away from the entrance, there is plenty that is noncommercial. Hint: rent a battery-powered cart. And bring bottled water. Here are one of the largest collection of orchids found anywhere in Thailand, 200 bonsai trees, sections of bromeliads, cactus, and enough palm trees (1,000 species are claimed) to make one fancier, Len Geiger, nearly pass out in appreciation. There is a sky bridge to get up close and personal to the tops of some of these. They deserve to be seen from all angles. There are gardens in the style of different cultures. Topiaries. Children will find plenty to keep themselves entertained. They won’t even know they are in a botanical garden.

This large manor house was built in the Loire Valley in 1536. The location is steeped in history, but the gardens date back only to 1906 when a Spanish doctor, Joachim Carvallo, bought the place, thanks to money his American wife, Anne Coleman, inherited from her grandfather, Pennsylvania’s first millionaire. (And be grateful Anne Coleman got away: her two aunts committed suicide after being thwarted in love by that same grandfather, one of them, believe it or not, over James Buchanan, later the only bachelor President of the United States.) 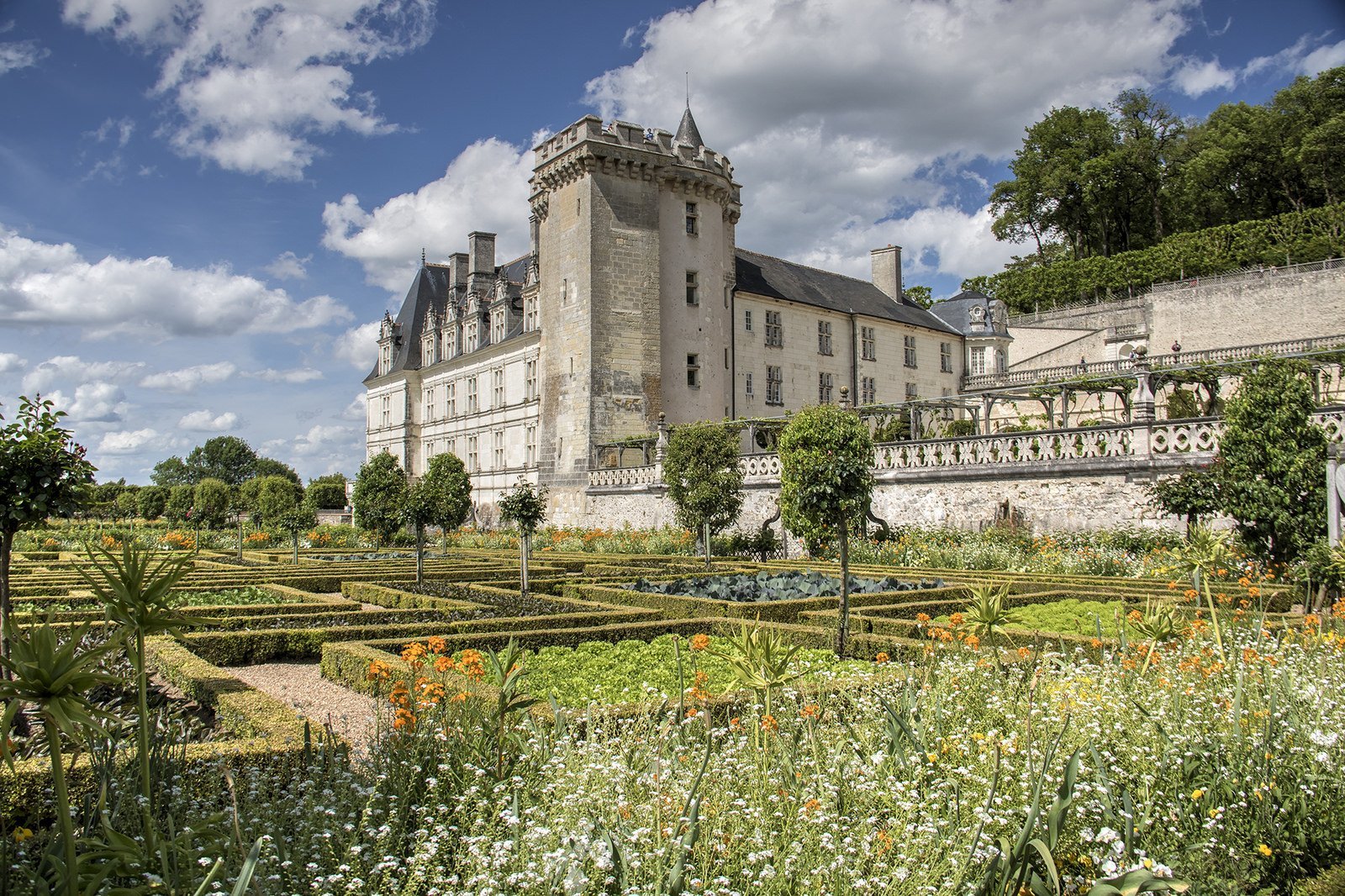 The gardens, laid out to reproduce what would have been formal French Renaissance patterns separated by boxwood hedges, include a water garden, many flower gardens and vegetable and herb gardens. Besides the gardens, the happy couple (they met when she was a medical intern in France) acquired an extensive art collection from the Spanish Renaissance to the 18th Century. The Carvallo family still owns the Chateau and keeps it and its world-renown garden open to the public.

Pierre S. du Pont laid out his first flower bed, a 600-foot garden that still exists, in 1906 on the 202 acres he owned. He then ordered up a glass-house Conservatory, which was finished in 1921. By 1927, he had built an Italian water garden with 600 jets capable of creating six different programs. 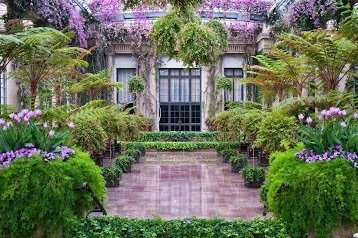 The Astounding Versailles In France

There were already gardens there – the spot was originally a hunting lodge – when Louis XIV hired the landscape designer Andre Le Notre to create the biggest and best. That meant canals, groves of trees, fountains, statues, basins, geometric flower beds as well as two grottoes in the Italian style and an orangery for the king’s fruit trees. The rigorous symmetry was obvious to the King as he stood on the terrace and looked out upon the endless rows of trees, brought in by cart, outlining formal beds, with their meticulously clipped patterns. 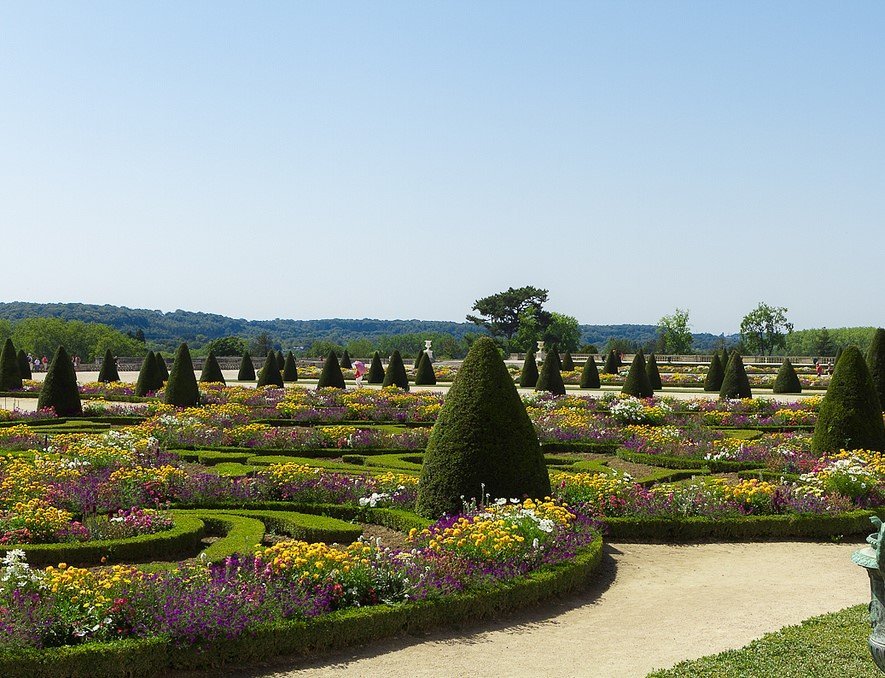 It took 40 years to complete all of the gardens, canals where the navy conducted exercises, fountains and statues. Le Notre died before then. Louis, known as the Sun King, reigned for 72 years (he started at age 5), long enough to see his gardens and orange trees, which grew in silver tubs and were hauled outside in summer, grow and flourish. He died in 1715. In 1789, when a later King Louis and his Queen, Marie Antoinette, lost their heads in the Revolution, Versailles was stripped of much of its finery. The gardens were mostly untouched, except for, one can imagine, the sansculottes (the militants described themselves as the people “without knee breeches”) enjoying fruit from the orangery.

We all know how seriously the English take their gardening. This is their monument to flowers. Kew Gardens is 326 acres of loveliness. In rainy weather, of which England is known to have some, the Princess of Wales Conservatory has 10 climate zones in which you can explore plants. It is hard to think of a type of plant that would not be represented in Kew Gardens: water lilies, cactus, orchids, bonsai. It’s just a matter of looking for them. 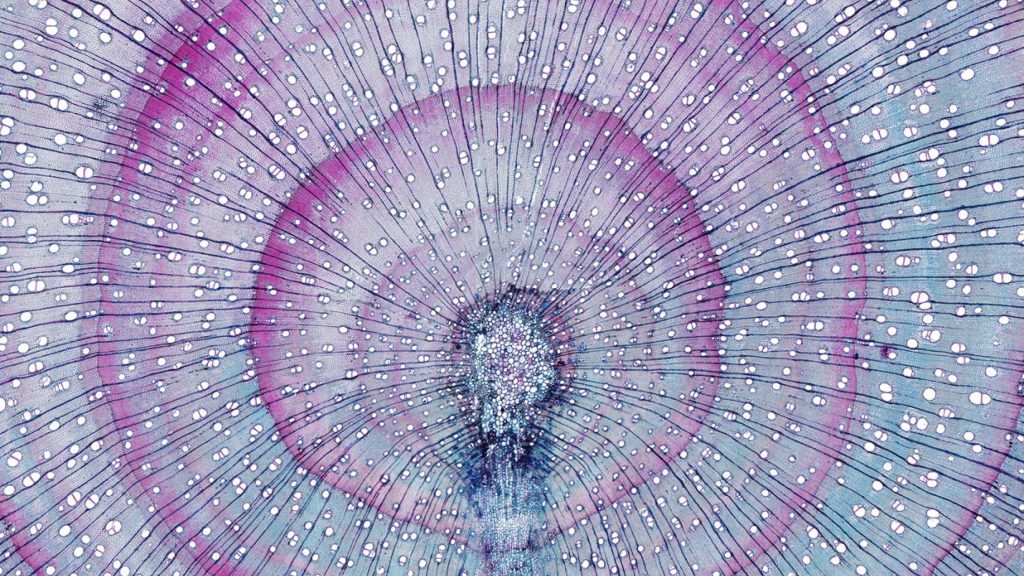 In addition to the plants on view Kew is a repository for seeds, has the world’s largest fungarium (collection of fungi) and has a mission to educate the public and provide research material for the experts. Do not consider this a day trip. Plan to spend a week, if you are passionate about plants, or architecture. There are 40 historically interesting buildings here. For a preview, you might watch the BBC documentary series “A Year at Kew.” Kew uses this background on its web page: a cross section of the stem and bark of a mimosa, magnified 5X and stained.

Explore our endless array of blogs, guides and useful tips on the beauty of gardens, using flowers in decor and much more!