We appreciate that the ring wasn’t square or predictable.

After all, her first hit was “I Kissed a Girl” before a string of other hits including “Roar,” “Firework” and “Unconditionally.”

Instead of opting for a traditional square engagement ring, actor Orlando Bloom proposed to the award-winning singer with a beautiful ruby and diamond flower ring.

Well, it’s what you would expect from a guy whose last name is Bloom. In fact, he seems to have made a practice of offering engagement rings in the shape of flowers. When he proposed to Victoria’s Secret model Miranda Kerr, he gave her a clear center diamond surrounded by eight clear diamonds of two different sizes. They divorced in 2013 and have an 8-year-old son. She has just had a second son with her second husband, Evan Siegel, the CEO of Twitter.

Perry was once married to Russell Brand. They married in 2010 and divorced in 2012.

So now love has rebloomed for both of them.

Orlando Bloom’s ring for Perry is different of course than for Kerr.  The eye of her flower is a ruby, surrounded by eight petals of white diamonds. It’s absolutely stunning, isn’t it? 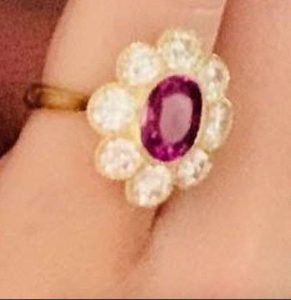 The couple’s friends tell “People” that they are looking forward to getting married and having children soon.

We now have another celebrity wedding to look forward to in  2019 and we will provide all the deets.