How to Plant, Grow and Care for Tulips

The tulip is one of the world’s most beloved flowers. Any art lover visiting the world’s museums can see how tulips have influenced and inspired artists for centuries. Their shape is easily recognizable and the bounty of colors offer opportunities for any canvas or home decor.

Tulips are fairly easy to grow and abundant in many cultures, although most famous in the Netherlands, where history buffs will remember how one bulb in 1634 was more valuable than a house. The highly-prized bulbs created a bidding frenzy until the market crashed in 1637.

Thankfully, tulips are much more reasonably priced today and are prevalent in most avid flower lover’s gardens — but how do you best plant, grow and care for these floral gems?

The following guide provides everything you need to know about tulips, their history, their individual meanings, how to cultivate them within your own garden and even how to cut them and style them within a bouquet.

Read on, enjoy, and then get gardening! 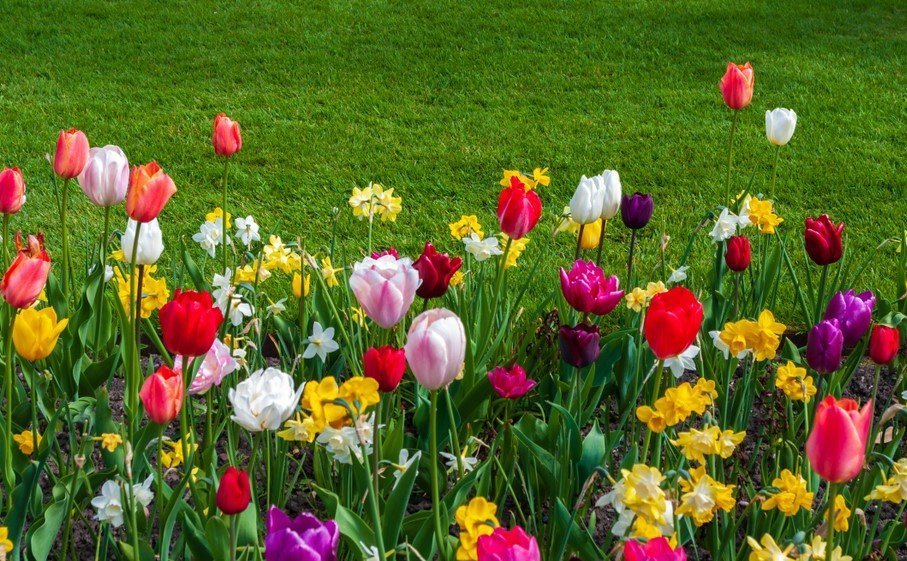 The Meaning Of Tulip And Their Various Colors

The word tulip comes from the Turkish and Persian word for turban. Tulips symbolize perfect love as well as a declaration of love. In the language of flowers, different colors convey different messages.

Pink Tulips – Caring attachment and wishing someone good wishes. Often used as an expression of friendship and appreciation to a friend or family member.

White Tulips – As with most white flowers, this also represents purity, innocence, forgiveness and respect. It is also sometimes used to express an apology.

Purple Tulips – The color of royalty, purple conveys feeling that you are like a Queen or King. Often to update a wedding bouquet, brides will use a light purple for that special sentiment.

Yellow Tulips – While it used to mean besotted hopeless love, it has evolved to a more positive meaning. With its bright color reminiscent of the sun,  it also indicates a welcome embrace of spring and cheerfulness.

Variegated Tulips – If you thought someone had beautiful eyes, you would go with these hybrids. Different and unique was this sentiment that dates would want to give to someone they are interested in.

When they bloom: May – June

When to plant them: Typically in the fall but can be planted in late summer.

Where to plant them:  Tulips need to be in the ground for 8 to 15 weeks when temperatures are between 32 and 50 degrees. Tulips should be planted 4 to 6 inches apart from each other. The recommended hole depth is 4 to 6 inches deep and measured from the top of the bulb to the surface. Larger bulbs would require deeper holes. In spring, tulips prefer at least four hours of sun a day, but do best when not exposed to sun during the hottest part of the day. 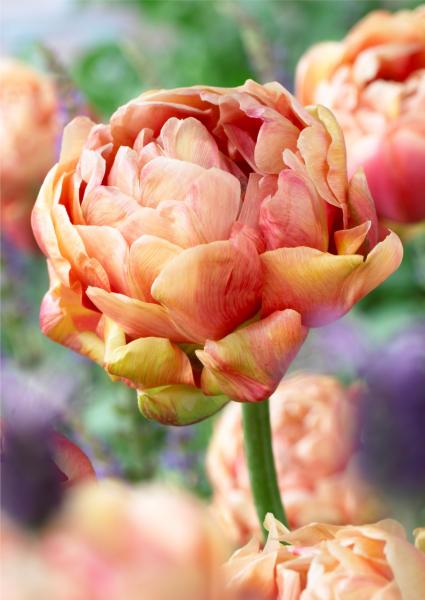 Copper Image, a peony-flowered tulip from BlomsBulbs in England,
which competed in flower shows throughout Great Britain.

How to Plant And Grow Tulips

According to BlomsBulbs in Melchbourne, Bedfordshire, England, Tulips will thrive in almost any type of soil where there is reasonable drainage. During the growing season, they like plenty of moisture but the roots must not stand in water. Be careful not to feed tulips during the growing season as this will produce ‘leggy’ plants. Plant from October until December, 4 inches deep and approximately 5 to 6 inches apart. 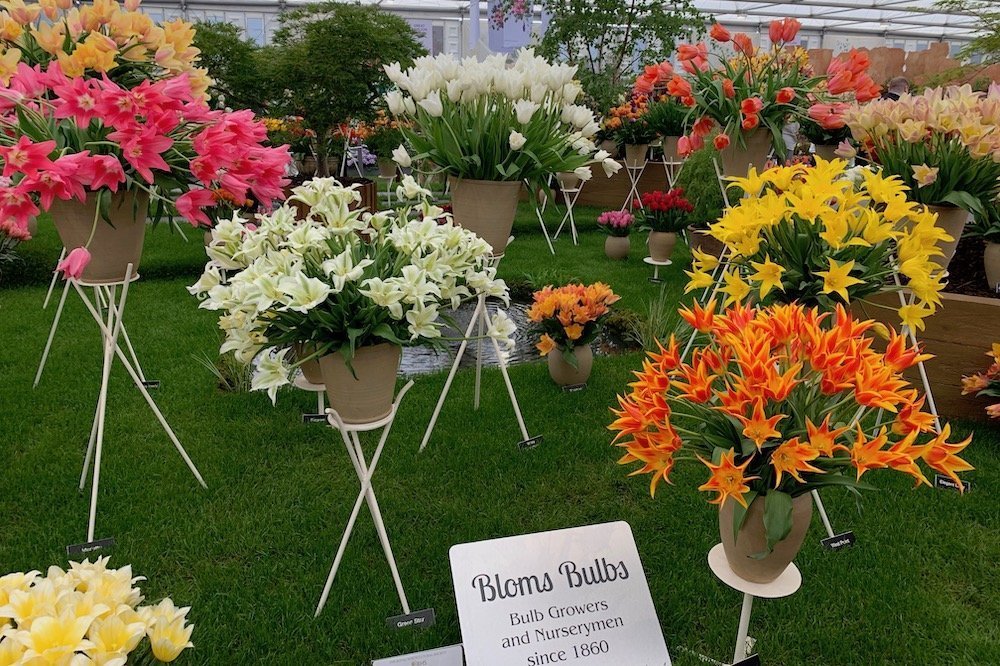 Tulip failures are mostly due to damage by slugs and snails. Apply a slug repellent immediately after planting and repeat at monthly intervals until the plants grow well above the ground.

Note: If you are using one of the many available bulb planters be sure that the soil in the whole planting area is well worked to prevent any standing water at the bottom of the hole made by the planter.

After the Tulips Have Bloomed

Remove the flower heads (deadheading) and let the plant die back before digging the bulb up. This allows the food supply in the plant to swell and feed the main bulblet that will produce next year’s flower.

It is important with tulips that all the dead foliage and petals are removed and not composted. Tulip plants can spread a disease, ‘tulip fire’ (Botrytis blight), as they die off in late spring. 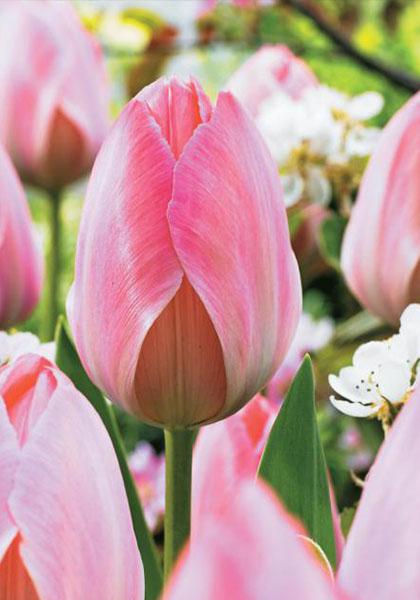 The small flowering species tulips and Darwin hybrids naturalize easily and can be left undisturbed from one year to another, some seeding themselves freely. With some of the other types of tulip you may find that the second and subsequent years are not as good as the first, depending on where the tulips are planted in your garden. This can be influenced by shade, drainage, planting depth so it is best to experiment. If this is the case, we would recommend that you lift the tulips after the foliage has died back and store them until replanting the following autumn.

Growing Tulips in Containers and Pots

Tulips are well suited for growing in containers and provide a superb display provided you follow a few basic principles. Protect from severe frost particularly when combined with penetrating winds. During these periods, store the containers in the garage, or wrap them with sacking or straw and cover with horticultural fleece. It is essential during dry periods in the growing season that tulips are sufficiently watered. If not, the results will be stunted and shriveled flower heads. 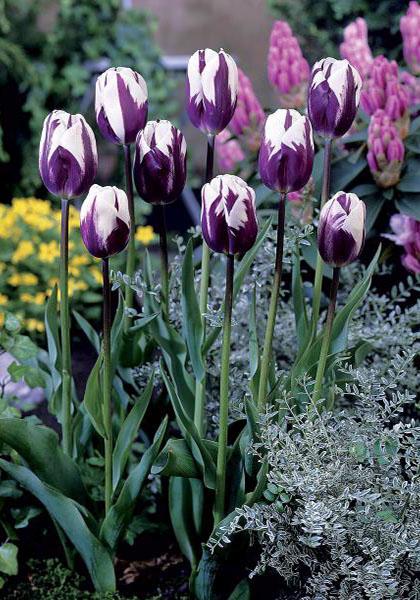 A tulip called Rem’s Favorite, from BlomBulbs in England,
a nursery that sells prize flower bulbs.

Blomsbulbs at the Chelsea Flower Show

In the same way you buy new accessories to update your wardrobe, do the same with flowers. At the Chelsea Flower Show in London, the largest flower show in the world, Blomsbulbs debuted  Louvre Orange, an intoxicating mix of orange and raspberry. 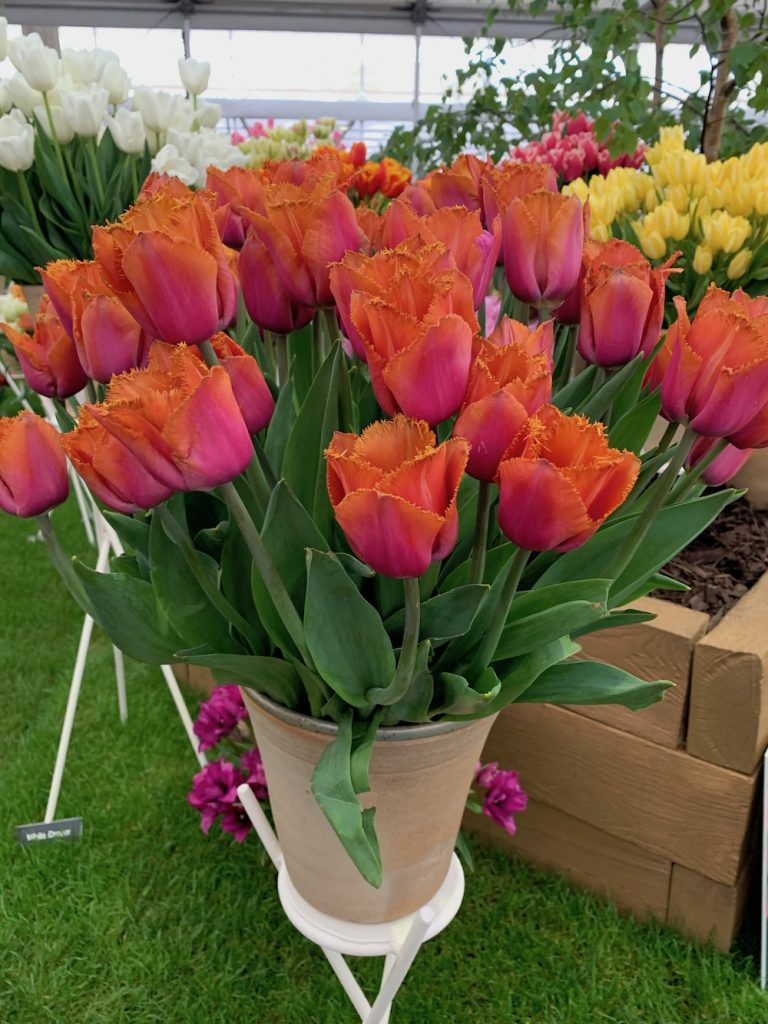 As far as names, it’s hard to resist “Pretty Woman,” a popular breed from 2018 as well as “Night Club” which is out in the open and spreads its magenta petals with abandon showing a dark interior and white stamen. 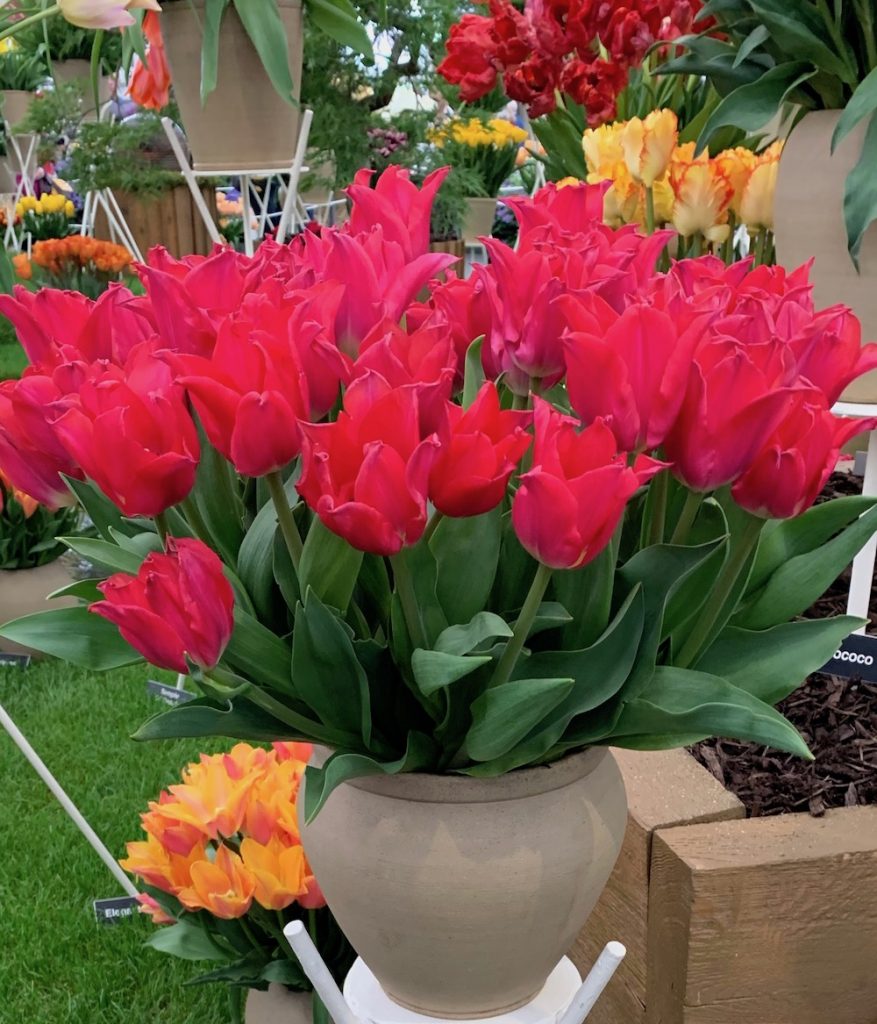 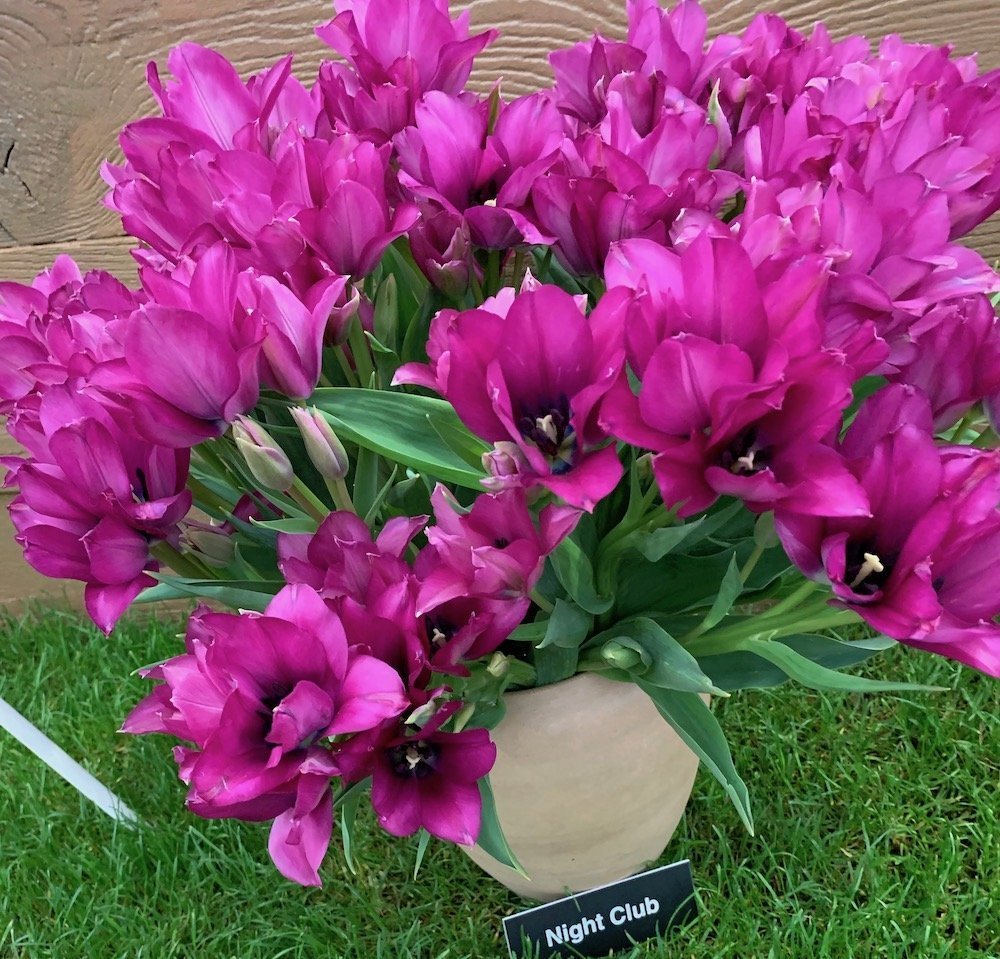 Our staff also loved these classic variegated beauties in purple and pink, that have edges like curled tutus and dance in the wind. 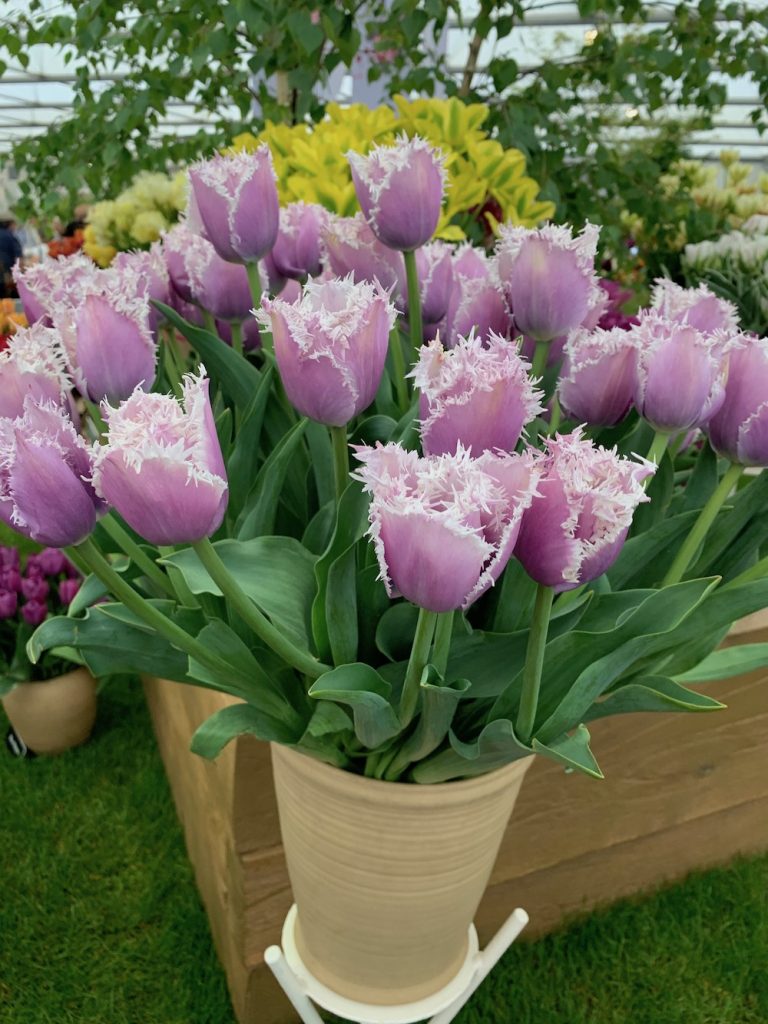 Useful Tips About Cutting Tulips for a Bouquet

Do not mix tulips and daffodils in a bouquet. Or if you want to mix them, put daffodils in a separate container of water for 12 hours first. Daffodils excrete latex from their stems, which will shorten the life of tulips. If you don’t cut the daffodil stems again, they will safely mix with tulips after 12 hours.

Tulips look best in a tall vase, which should be scrupulously clean. Bleach, pennies, lemon-lime soda – none of those home remedies work to prolong the life of cut flowers. What works is commercial additives from flower shops. Tests by universities have proven that, scientifically.

Tulips, you should know, continue to grow when placed in water, as much as an inch. That is one reason they tend to bend. They are also phototropic and will bend toward the light. So keep cut tulips away from direct sunlight.

Tulips also take up a good amount of water. Continue to add water the second and third day.

On the fourth day replace all the water in the vase, to keep the water fresh and help prevent the growth of bacteria.

As previously mentioned, tulips first became all the rave in Holland during tulip mania, a speculative bubble during which tulip prices soared 20-fold.

During that time, the Semper Augustus was the most expensive tulip during tulip mania. “The color is white, with Carmine on a blue base, and with an unbroken flame right to the top” – wrote Nicolas van Wassenaer in 1624 after seeing the tulip in the garden of one Dr Adriaen Pauw, a director of the new East India Company. With limited specimens in existence at the time and most owned by Pauw, his refusal to sell any flowers, despite wildly escalating offers, is believed by some to have sparked the mania.

Thankfully, tulips are no longer an expensive item. Anyone can enjoy their varieties and beauty.

The Netherlands still produce the most tulips in the world and export over 3 billion bulbs annually. In fact, many people refer to tulips as “Dutch tulips” as a form of connoisseurship. However, California is now also a popular producer of tulips and has its own tulip festival.

Historically, cultivation started in the Ottoman Empire where numerous types of tulips were bred. In the 1500s, tulips were extensively cultivated in Turkey, and because of their resemblance to the “tulbend” — a turban worn by Turkish men — were called tulipan.

Early gardeners delighted in the discovery that tulips are subject to mutations that produced spontaneous changes in form and color. Among the Persian people, according to reports, the tulip is an offering a young man makes to his beloved. By offering her a tulip, he says, “As the redness of this flower, I am on fire with love.”

in Turkish culture, the tulip became a symbol of paradise on earth and had almost a divine status. In the Netherlands, as imports and popularity grew, it represented the briefness of life and a message to enjoy the moment for all its beauty.

Europeans eventually shorted the name “tulipan” to just tulip, as it remains today.

The Long-Awaited All Black Tulip

Known as the Queen of the Night, this dark-dark purple tulip elicits a sense of mystery. “The Black Tulip” was a historical romance by Alexandre Dumas.  The story is about a reward being offered to the first grower of a truly black tulip. 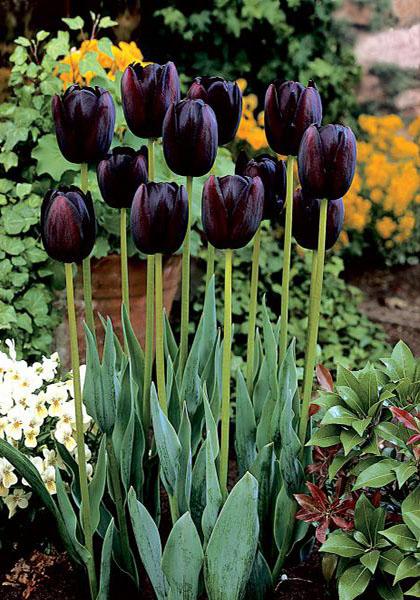 While tulips can be bred to display a wide variety of colors, black tulips have historically been difficult to achieve. The Queen of the Night tulip is as close to black as a flower gets, though it is, in fact, a dark and glossy maroonish purple – nonetheless, an effect prized by the Dutch and everywhere else in the world. Incidentally, Queen of the Night prefers to live her blooming life out of strong sunlight. Plant her along the edge of the yard, where trees can offer some shade.

The news wires excitedly announced in 1986 that the first truly black tulip was bred by a Dutch flower grower in Bovenkarspel, the Netherlands. The specimen was created by cross-breeding two deep purple tulips, the Queen of the Night and Wienerwald tulips. The breeder, Gert Hageman, said at the time that it would take 15 to 20 years of cultivating and experimenting before there would be “plenty of black tulips” on the market.

That long-promised bounty of truly black tulips is well-past due.