Since London has the Chelsea Flower Show, why shouldn’t New York have a similar floral extravaganza and floral love fest?  That was the thinking of Moira Breslin, the owner of Articulate Productions, a communications company based in both London and New York.

Because when you have the savvy, organizational skills and contacts of Breslin, you know who to call. 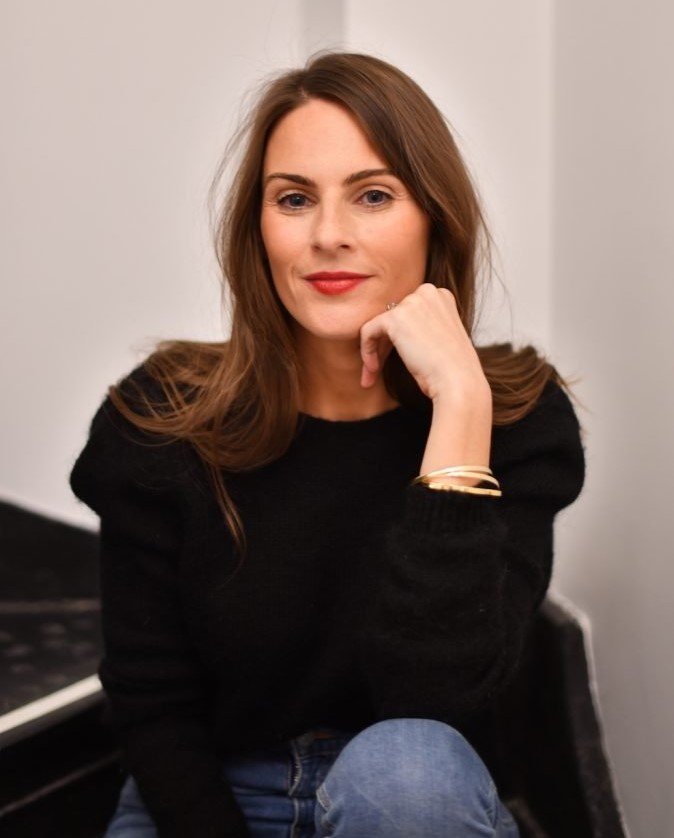 A few months ago, Breslin contacted Lewis Miller, whose widely popular Flower Flash pop-up installations have started a trend throughout the United States, and the two discussed creating a city-wide festival of flowers. After all, New York is home to some of the greatest florists on the planet and is also a place that appreciates style and daring.

Pumped with adrenaline, she also made a call to Calvert Crary, the beloved Yoda-like teacher who is the executive director of FlowerSchool NY.

He listened to her passionate pitch for the L.E.A.F. event, which is what she named the week-long floral event, and he also signed on.

Talk about a slam dunk.

What appealed to these admired leaders of the industry is that many talented florists produce works of art for their corporate and personal clients that the public doesn’t see. But L.E.A.F. is for all New Yorkers, as well as for the thousands of tourists who visit the Big Apple in June.

Miller, whose press clips are piling up as high as a New York skyscraper, started Flower Flash to give back to the city that had launched his prolific career. With stealth-like precision, he and his team take floral discards from his posh events and plant them in unsuspecting places, like a New York trash can bursting with roses, to the delight of passersby.

That’s the beautiful reality of flowers. Every person on the planet responds to them with a smile.

Furthermore, these installations are an opportunity to showcase up-and-coming talent who are drawn to a career linking nature and art.

“The designers we work with are the best of the best, and we’re thrilled that L.E.A.F is bringing exposure to these hard-working designers and creating a curated platform to make their work more accessible to the public,” says Crary. “FlowerSchool partnered with L.E.A.F to support New York Flower Week, and its mission to share the very best of floral design all over the city. New York City is the center of the design world, with the highest standards and fiercest competition.” 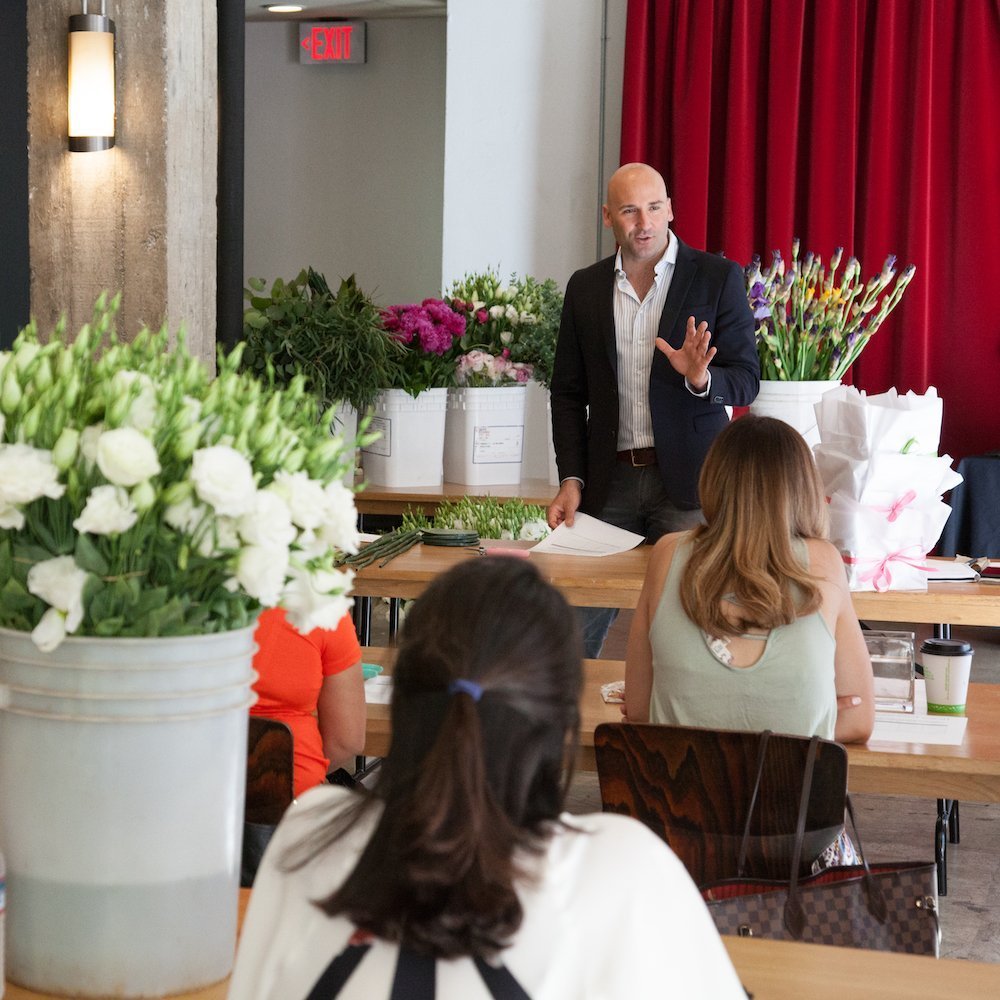 Soon other professionals signed on, including the creative agency East Olivia as well as B Floral and Cape Lily.

This year is considered a soft launch. The official launch is 2020. Breslin wanted to start small and then expand where she will welcome many other floral professionals.

Except of course asking any florist to think small is like asking Donald Trump not to tweet.  By any standard, New York is going to be floral fun this week.

“Today, the world of Floriculture is in full bloom,” says Breslin. “I am so pleased to present L.E.A.F., our city-wide festival of Flowers. It’s an opportunity for all New Yorkers to come together and enjoy the beauty of nature.”

Lewis Miller and his team’s Flower Flash installations can be seen in several iconic places.  The locations include Lee Lawrie’s 45-foot Atlas statue at 45 Rockefeller Plaza, Bernard Rosenthal’s ‘The Alamo” at Astor Place and Fernando Botero’s ‘The Crosby Cat” in front of Crosby Street Hotel at 79 Crosby Street. 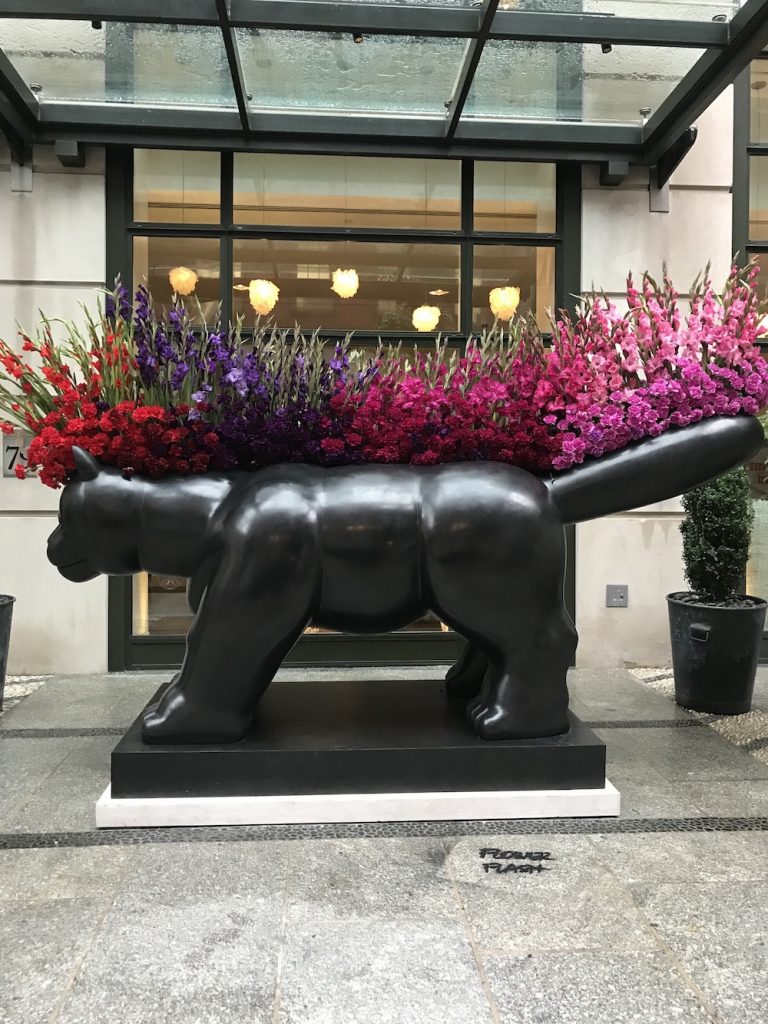 “I’ve been hiring him to do our flowers since I first started,” Kemp told me when I interviewed her on her floral interior designs.

Kemp was happy to be on board with this project thanks to Miller.

FlowerSchool NY,  which is located at 213 West 14th Street, is stretching their considerable talents and created a stunning outdoor installation as part of their participation. It will also be accompanied by an al-fresco Flower Shop selling bouquets for just $10 instead of $25.  These displays can be seen from 10 a.m. to 7 p.m. on June 11 and 12.

Joe’s Jeans, on 83 Mercer Street, will have an outdoor installation designed by B Floral which should be both whimsical and vibrant.

Aesop, on 232 Elizabeth Street, will be adorning their store with bouquets of luscious blooms as will Cape Lily at The Source at 651 West 175th Street.

Last but not least, one may remember that Lewis Miller did oversee the bouquet-arranging tutorial for Meghan Markle’s baby shower here in New York.  La Ligne on 996 Madison Avenue will be giving away Lewis Miller’s hand-tied baby bouquets with a purchase and also offering a limited edition of a floral painted pochette.

Pretty wonderful, isn’t it? Plus, a portion of the proceeds will be donated to the Central Park Conservancy.

All these installations and efforts share the most important ingredient. Coming together through a love of flowers and wanting to make many people very very happy. I’m hoping to see some white carnations in some of these creatively inspired installations.

In Charlotte de Latou’s seminal book in 1819 describing the language of flowers, the white carnation is the flower for good luck.