Lewis Miller calls himself a “storyteller through the art of floral design.”

So when Meghan Markle‘s friends wanted to create a memorable story from her baby shower in New York City, Miller was hired to teach her friends –  including Amal Clooney, Serena Williams, Gayle King, Abigail Spencer, and  Jessica Mulroney – a flower arranging class.

Following the shower, Markle was happy to learn that the flowers were being donated to Repeat Roses, an organization that recycles florals from events and distributes them to hospitals and care centers to bring patients some cheerful company.

Jennifer Grove, the CEO of Repeat Roses, revealed that they were gifted to pediatric cancer patients at Ronald McDonald House Charities of New York. 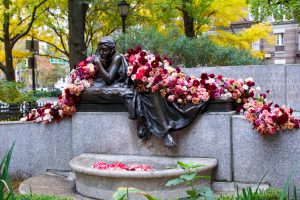 As guest Gayle King later revealed on her CBS morning show, “I’ve never seen anything like this at a baby shower,” she said.  Let’s hope this baby shower trend continues.

It is not a surprise that Jennifer Zabinski, of JZ Events, who planned Serena Williams’ 2017 wedding, chose Miller.

He is not only talented but discreet and beloved.

Recommended: As Symbol of Hope, Vogue Puts a Single Rose on Its June Cover

To give back to the city that launched his successful business, he and his team imagined ways to give New Yorkers access to the kind of floral design that otherwise would be accessible only to his high-net-worth clients.

Because art should be shared, they came up with a plan that involved subterfuge, generosity, mischief, and fun. On a brisk October evening in 2016, Miller and his floral elves gathered buckets of dahlias and carnations and loaded them into a van at their East Village store. Then they drove to Central Park. Making sure no one was watching, they put a ring of yellow, orange and pink flowers around the mandala dedicated to Beatles singer John Lennon in what they called “floral street art,” and later terms “Floral Flash Art.”

Imagine that. It took less than 20 minutes. They left, and the next day visitors arrived to find a visual sensation. 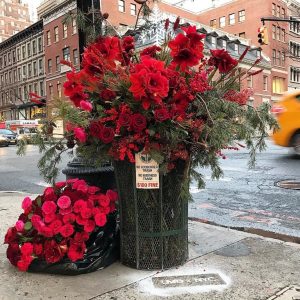 “For New Yorkers, it was like seeing a Bengal tiger on the street,” says Irini Arakas Greenbaum, Lewis Miller’s special projects director. “It started as a simple act to put smiles on people’s faces but now has evolved to include donating flowers to after-school programs and for under-privileged students.”

Sometimes it puts more than smiles on people’s faces. Upon witnessing a Floral Flash installment near a NYC subway, a stranger went over to the team and asked Arakas if he could have some flowers for his homebound elderly mother. Arakas gave him a bunch of roses.  Upon receiving them, the man started singing and serenading the team. “Lean on me, when you’re not strong and I’ll be your friend, I’ll help you car- ree-eey on…” The team cheered him and completed their mission. 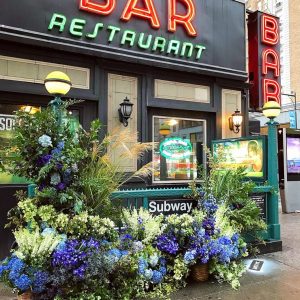 In the past two years, the team has done 50 installations; their plans are top secret, but sometimes honor significant dates, like International Women’s Day, which earned flower tributes for Fearless Girl and four other statues of women in New York City, compliments of Old Navy.

The installations have ranged from placing a robe of ruby red roses on a naked Central Park statue to stuffing forsythia branches and golden sunflowers in an empty city trash can. Another time, Robert Indiana’s iconic LOVE sculpture got the Miller munificence with delicate white flowers streaming from its large, red block letters. Feeling more love, the Lewis Miller team also created a six-foot-tall wreath of anemones, sweet peas and roses in a heart shape to greet subway riders on a dreary day.

Recommended: Inhale! The 10 Most Fragrant Flowers for a Blissfully Scented Garden

All the flowers are recycled, which represents another lesson flowers can quietly teach. Not only to focus on the moment, but also how beauty can be re-purposed.

Lewis Miller routinely designs fantasy flower installations for gala events at the New York Public Library and the Maidstone Country Club; flowers are then taken back to the studio and reused in inventive, charitable ways. 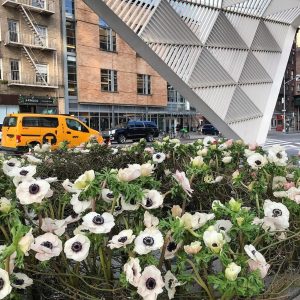 White anemones and pale pink peonies from Flash Art formed a mound at the base of the AIDS Memorial Park in Greenwich Village in 2018 to mark World AIDS Day.

In fact, because of the popularity of Flower Flash, people are donating flowers to their team. For a Tory Burch fashion show, the designer used 17,000 pink carnations and later donated them to the Lewis Miller team allowing him to be like the environmental artist Christo but with carnations for Valentine’s Day.

The choice of dahlias to start their floral street art has symbolic roots that resonate even now.  The dahlia is the symbol of commitment and a bond that lasts forever. The Lewis Miller team’s Flower Flash has created a bond with New Yorkers; anyone who has happened on one of these installations knows the image lives in memory forever.