Meghan Markle and Queen Victoria have something in common. They both are trendsetters in shaping how the public incorporates their creative wedding ideas. Naturally, flowers play an essential role in the royal weddings of these strong, independent women.

After all, it was during Victoria’s reign from 1837 to 1901 that people expressed sentiments through the language of flowers and during which arranging flowers was elevated to an art form. Saddled with strict protocols on flirtation and expectations of proper etiquette, people used flowers to convey secret messages. It was a game of intrigue and fun. 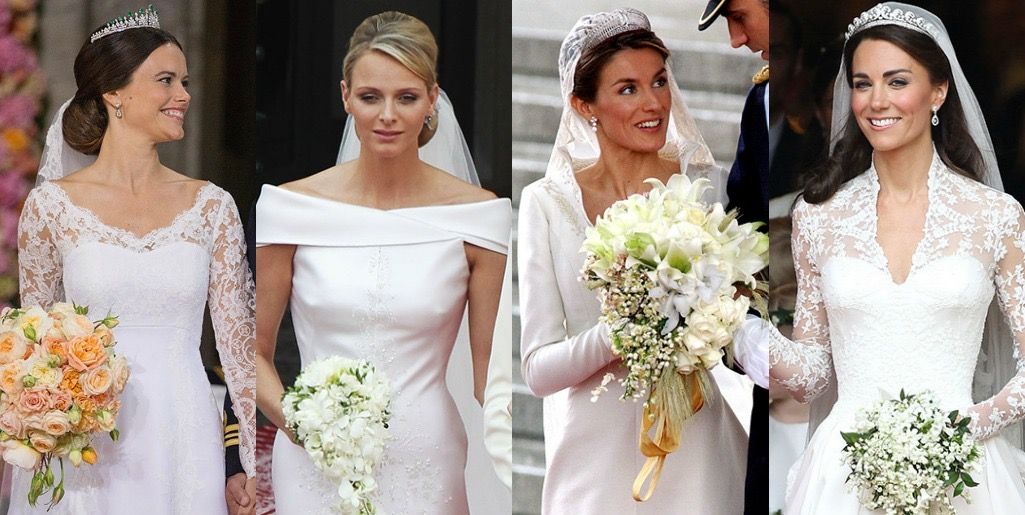 Although the use of flowers to express love, friendship, gratitude and remorse became a popular English practice, its roots hailed from Persia. But the language of flowers flourished in England, home to Shakespeare and Wordsworth.

Royal Bouquets And A Sprig Of Myrtle

It was noted when Meghan Markle married Prince Harry last May that a sprig of myrtle was in her bridal bouquet as it was when Kate Middleton married Prince William. This tradition dates to 1840 when Queen Victoria married her beloved husband, Albert. A small myrtle shrub was presented to Victoria by Prince Albert’s grandmother in Germany. The couple brought it back from Germany and planted it at Osborne House, their holiday home on the Isle of Wight, where it blossomed.

Queen Victoria then tore off a sentimental sprig from the tree to give to her daughter Princess Victoria when she married in 1858, spearheading this tradition that has endured. Now all British royal brides carry a sprig of myrtle.

In the language of flowers, myrtle represents loyalty, faithfulness and good luck, sentiments you hope for with a young marriage. And the passion between Queen Victoria and Prince Albert was a love for the ages, currently immortalized in a PBS series starring Jenny Coleman and Tom Hughes. 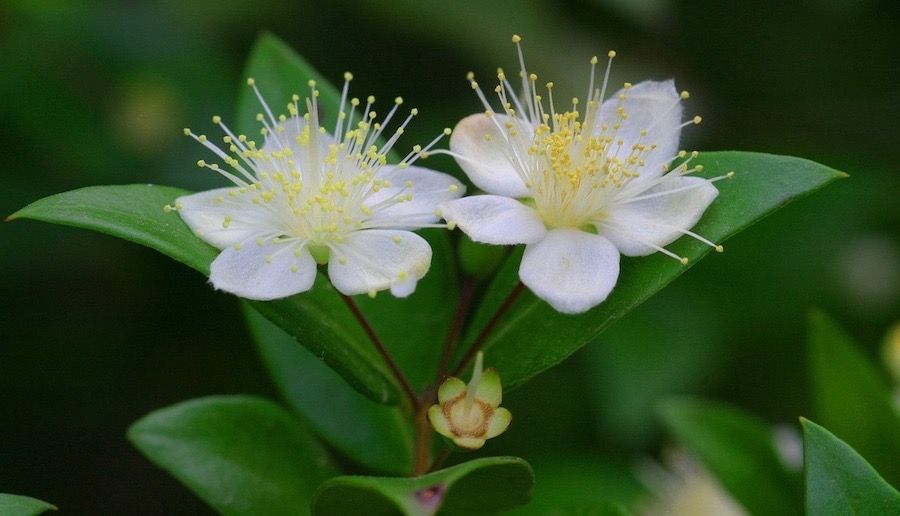 In addition to the spring of myrtle, Meghan Markle personalized her all-white wedding bouquet with Forget-Me-Nots since they were Princess Diana’s favorite flowers. Blooms in the bouquet, which were crafted by London florist Philippa Craddock (with a little help from Harry, who picked some flowers in the Royal garden) included sweet peas, lily of the valley, astilbe, jasmine and astrantia.

Missing from Meghan Markle’s bouquet was one of Queen Victoria’s favorite flowers – the orange blossom – which also symbolizes chastity. Queen Victoria broke protocol in not wearing a crown and in choosing a simple wreath of orange blossoms on her wedding day. (Meghan Markle, now the Duchess of Sussex, chose an art deco tiara loaned by the Queen.)

As historian Elizabeth Jane Timms writes, “This was in turn copied by some of Victoria’s daughters and daughters-in-law on their marriages, when the orange blossoms were incorporated around the hems of their bridal gowns, together with the sprigs of myrtle.”

Historians have credited Queen Victoria for popularizing the tradition of wearing a white gown for a wedding; previously brides wore various colors, especially blue, which was thought to symbolize purity. Similarly, the orange blossoms that were embroidered on her gown were more easily duplicated than wearing actual orange blossoms. 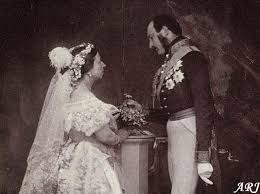 “Victoria had chosen to wear white mostly because it was the perfect color to highlight the delicate lace [of her gown],” wrote biographer Julia Baird. The 20-year-old bride understood she was to be the star of the wedding and asked “that no one else wear white to the wedding,” aside from her 12 bridesmaids. Thus another tradition was born.

If Prince Albert was going to get a gift for his wife, it didn’t take a genius to realize she loved orange blossoms. And Albert was a genius, a polymath, a musician, linguist and cultivated man. On their sixth anniversary, he gave Queen Victoria a beautiful porcelain wreath of four blossoms – representing their four children. (They eventually had nine). Prince Albert added other gifts including orange blossom earrings, two broaches and a headdress – all items cherished by Queen Victoria, especially after he died at the age of 42.

In fact, the orange blossom is also associated with betrothal. After she proposed to him, she was the queen, after all, he sent her an orange blossom broach, with a note, for her to think of him.

Queen Victoria’s love of the white orange blossom also sparked a demand for floral jewelry. According to historian Elizabeth Timms, as a personal memory of her wedding day, the Queen wore orange blossom as a fragrance in her widowhood to link her to her beloved husband. When she died, she chose to be buried with her white lace wedding veil instead of posh royal regalia. 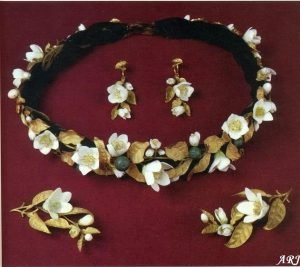 Speaking of veils, Meghan’s silk tulle veil also conveyed sentimental symbolism. The 16-foot veil was designed by Clare Waight Keller, an Englishwoman who is the artistic director of Givenchy. Circling the luminous, billowy veil were delicately embroidered flowers representing each of the 53 countries in the Commonwealth. Some of the flowers include the tropical orchid from Kenya, the white waterlily from Bangladesh, the bunchberry from Canada and the chaconia flower from Trinidad and Tobago.

According to official palace reports, it took 500 hours for Givenchy’s workers to complete the embroidery. Meghan had personal requests for two additional flowers. Because she was from the United States, a California poppy was added, as was wintersweet, which grows in front of Nottingham Cottage, the two-bedroom home on the grounds of Kensington Palace where the couple were living. 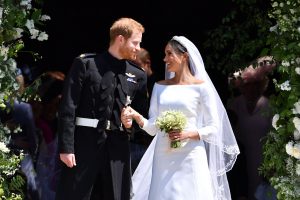 Last but not least, Markle – now the Duchess of Sussex – broke protocol with her choice of a wedding cake.  Instead of the traditional fruitcake, guests enjoyed a lemon buttercream elderflower cake as well as an elderflower cocktail. Because of Markle, elderflower has been anointed the culinary trend for 2019.

The public will be able to see Markle’s veil along with their couple’s wedding outfits at a traveling exhibition at the Palace of Holyroodhouse in Edinburgh from June 14 to October 6, 2019 called Royal Wedding: The Duke and Duchess of Sussex. If not in Scotland, one can go to the Victoria and Albert Museum in London to feast on Queen Victoria’s influence, which continues to this day.

How To Arrange A Royal Wedding Bouquet

Jill Brooke provides a brief guide to creating your very own Royal wedding bouquet. Follow our YouTube channel for more do-it-yourself videos or explore coverage of international flower shows, destinations and much more!