For eons man and woman concerned themselves with merely covering themselves. First, they used animal skins. Then they learned to weave fabrics. We know people always loved flowers because wild flowers were cultivated, worn as wreathes, carried, presented as gifts. We can see this in murals by the Greeks, Romans and especially the Egyptians who revered the lotus, and arranged bouquets of roses, jasmine, poppies and lilies, long before flower prints leaped onto cloth. 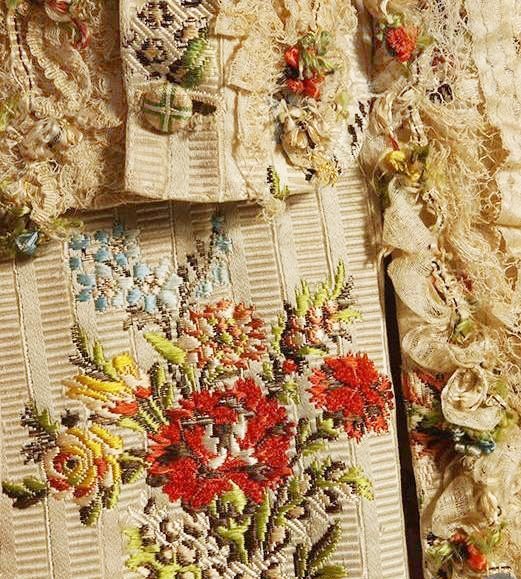 But two thousand years ago, the Chinese used silk thread to embroider artistic depictions of flowers, vines, birds and nature scenes, as well as dragons, onto pieces of silk.  Accordingly, early embroidery was commissioned by the wealthy. 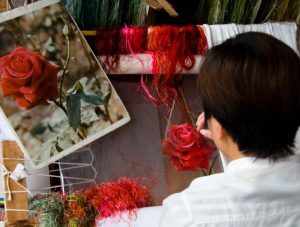 In the earliest days in China that was the warlords, whose silk robes required more dragons than flowers. But in 1982 a tomb in Jingzhou was excavated, the No. 1 Chu Tomb, which was 2000 years old. Inside was a gown and a bed quilt, both embroidered with dragons, phoenixes and flowers, considered imperial symbols of that empire in what was called the Warring States Period.

Jingzhou is the neighbor to Suzhou, considered the home to the finest embroidery in China, and a research center and museum where hand embroidery is still done.  It is here where visitors can see the remarkable two-sided embroidery, where two different scenes are completed on a sheer piece of silk, and there is no front or back. Needless to say the word “silk road” give some clue as to the course of influence for embroidery.

Because it required silk (which was expensive) and fine needlework (which required training) and a cadre of needle workers (who had to be supported), the first ones to afford embroidery were church people, who used monks and nuns to do the work, and royalty.

Embroidery appeared in Japan around 500 the common era, at first on religious items, and by the millennium on gowns for ladies of the court. Interestingly, embroidered silk cloths were used in Japan as an elegant way to present gifts at the highest levels of society. It was understood that the precious embroidered cloth was the be returned.

By the 12th century silk embroidered with flowers, birds and scenic waterfalls were being used for robes. It was these items that made their way, eventually, to the rulers of India and Persia, then to Italy and France, as seen at left. People talk about pepper being a precious commodity along the silk route, but pepper could not be duplicated. Once a ruler’s master of the household has seen a piece of embroidered cloth, he could show it to the seamstresses who made the king’s waistcoat and put them to work.

However, they still needed the silk, which came from China. It was silk thread that made the embroidery beautiful. And silk fabrics were the background. Wool and linen would not do. By the 12th century, and the second crusade, European knights brought back something more valuable that relics of saints: people from the Byzantine Empire who knew how to make silk, to cultivate silk worms, and to embroider.

Embroidery Make Its Way To What Is Now Modern Day Italy

The knowledge seemed to make it only as far as a few kingdoms in what is now Italy, and settled in Venice, Sicily and Florence, at first. The waistcoat below was made Venice in 1620.

Those Italian centers soon became famous for not just silk production but for other luxury fabrics: velvet, damask, satin. Of course, the Catholic church – which is to say, the church – benefitted enormously from the beauty of these materials, as in this heavily embroidered chasuble, the outer garment worn by the clergy to celebrate the eucharist. The one above ignores the typical religious imagery and opts instead for pure beauty. Such embroidery is also found on Torah covers and objects used for meditation, celebration or mourning, as in this embroidered casket from 1671, in the collection of the Victoria & Albert Museum in London.

But let’s leave silk and embroidery aside, just as it is reaching its peak in Italy, where it spreads to France and then England and to Germany and Bavaria, to Norway where it turns up on colorful wedding costumes and to needlework in American Colonial homes.

There were other ways to depict flowers in fashion and they are as beautiful as embroidery, although monochrome. That is lace. Lacework is almost as old as knitting. In fact, there is a kind of lace called “knitting lace” that involves leaving strategic spaces, and results in quite beautiful patterns such as this. But the kind of foppish lace we think of as decorating Sir Walter Raleigh’s sleeves arrived in the 16th century. 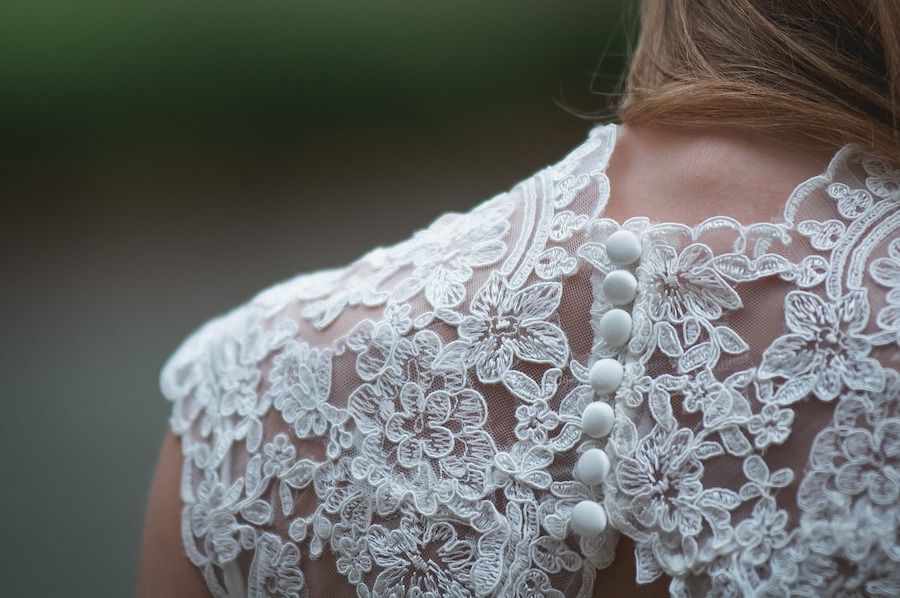 Again, it was expensive. The first thread used to create lace was linen, followed by cotton, which came from the East. Lace first appeared as a narrow trim around collars. Soon, the size of the court grew and as a rising class of burghers were able to afford the finer things in life, and as more people learned to make lace, lace became wider, and more elaborate.

Different kinds of lace became associated with different countries, even different towns within countries.  Carrickmacross Lace, made in Ireland, was a direct descended of a lace made in Italy. The Carrickmacross lace-making school was started in 1820 and it carried County Monaghan through the Irish potato famine. The lace ended up recently on Kate Middleton’s wedding veil. The images of this lace and the refined Pont de Gaze lace come from Marla Mallet’s extensive web site and sales catalog of laces. There you can educate yourself on the differences between bobbin lace, tape lace and every variety of lace.

For our purposes, let’s just note that flowers, vines, trees, baskets, vases, posies, nature scenes were repeated in variations on lace, from simple daisy chains to elaborate scenes of nature. If someone could imagine it, the lace maker could create it and there is a name for every kind of stitch.

As looms got bigger, their canvases grew until lace bridal trains could encompass the 53 embroidered flowers of the Commonwealth on Meghan Markle’s veil.

Printed Floral Fabrics Of The World

Now we are going to tackle printed fabrics, the what we think of today as florals. (Are you asking yourself why some enterprising designers didn’t just paint designs onto dresses? There is no doubt there was some trompe l’oeil attempted, but since it’s only effective at a distance, any close approach would spoil the effect and, of course, touching the fabric would be repellent.)

Printing fabric requires the making of cotton, and knowing how to print on cotton, making dyes that would not bleed when washed, called establishing a “mordant,” and building looms large enough to make fabric on. All of that came together in the Middle East, in particular, in India.

Design in India was influenced by the floral designs of Persian carpets and miniatures, which had been, in turn, influenced by Chinese embroidery. Each had added their own symbolism. The Chinese revered the chrysanthemum and the crane, the phoenix and the dragon. The Persians added, often angular and abstracted, the lily, peony, iris, the hyacinth, rose, tulip, the camel, the tree of life and bird of paradise.

In India, especially in Goa (which later gave the world denim), Indian craftsmen began making a glazed cotton fabric of repeated tiny flowers, originally just painted on, in madder red and violet blue, based on local plants. And they knew how to fix the images of tiny flowers, which they called “chint,” or spots. The plural was “chintz.” By this point it was the Portuguese who were the main traders with India and the former Ottoman Empire. So the Portuguese brought this chintz to Europe, where it made its way to Samuel Pepys’s wife in the 1600s, where, her husband said, she used the Indian calico chintz “to line her new study which is very pretty.”

Chintz, which was later printed with wood blocks, was first on a light background, but later on a dark background, It almost always showed small-scale flowers and leaves, imitating the borders of Persian carpets.

Among French aristocracy, these chintz fabrics became enormously popular as bedding and curtains. It was only when pieces of chintz ended up in the hands of servants, who fashioned them into clothing, that anyone thought of wearing them, perhaps the first clue that chintzy would someday come to mean cheap. But chintz caught on. It was cheerful. Cool in summer. And it was new.

Laws were passed forbidding the import of chintz, thus making it more interesting. (It was a matter of trade – and a question of when French and English mills would learn the tricks of making, printing and dying cotton fabrics.) They eventually did, and the first fabrics they printed were imitations of the popular prints, of flowers and vines: chintz. 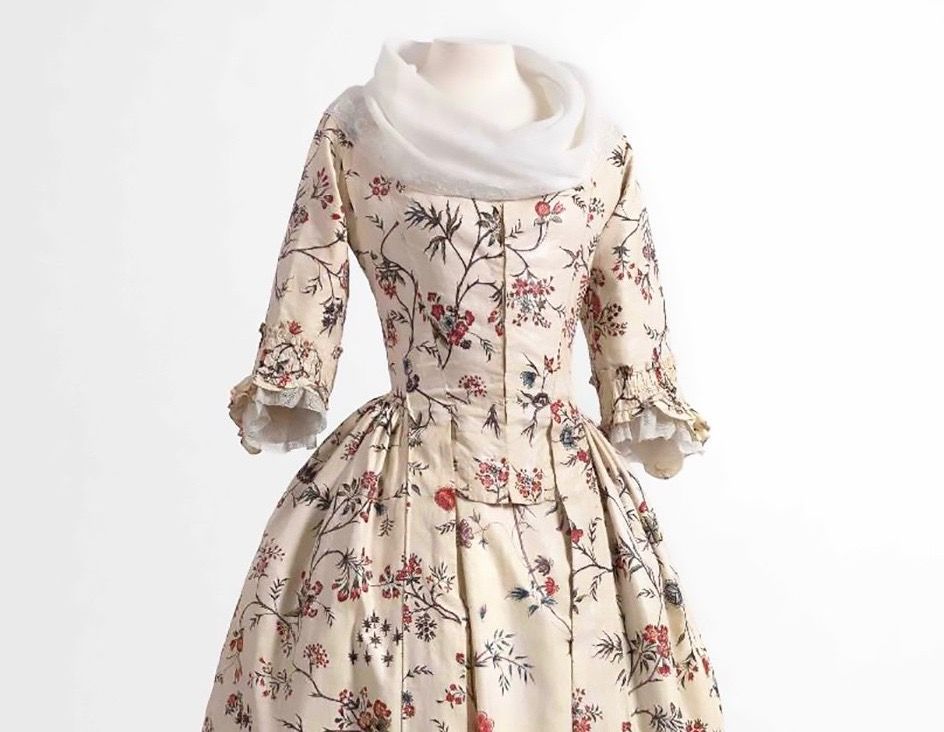 By this time Europeans had multiple ways of portraying flowers on their clothing: print fabrics, embroidery and lace. Of course, they also loaded on perfumes, and in Victorian times carried tussy mussies, bouquets with “secret” messages.

And still we can’t do enough to show our love of flowers.

The eternally feminine, the symbol of sweetness, of innocence, of nature itself… why wouldn’t we want to portray flowers on our clothes?  — Linda Lee