How to Grow and Care for Peonies 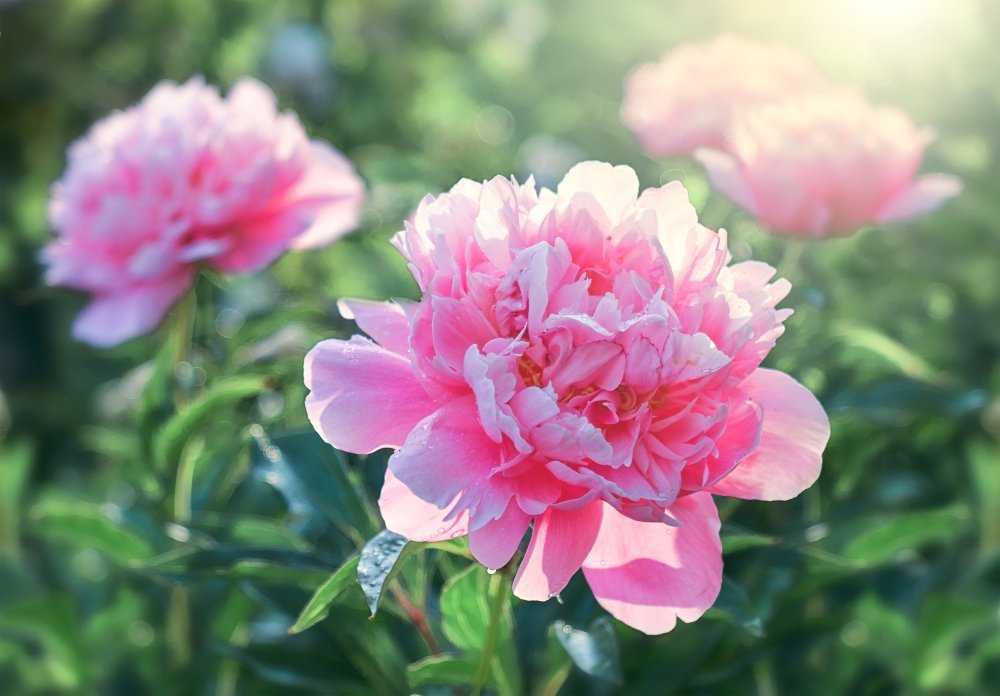 When to plant: fall

What peony means: The peony is an imperial symbol in Eastern cultures. In Greek mythology, one version has it that peonies get their name from Paeon, the physician to the gods. Another myth links the name to a beautiful nymph named Paeonia. Both Greek and Eastern cultures have used herbaceous peonies as medicine and revered them for their beauty.

When they bloom: May-June

Where to plant: full sun

Disambiguation: There are three types of peonies. This entry deals only with herbaceous peonies. There are also tree peonies (Paeonia suffruticosa), native to China, which grow up to six feet tall and have enormous, papery flowers in April and May, and ITOH peonies, hybrids between herbaceous and tree peonies. 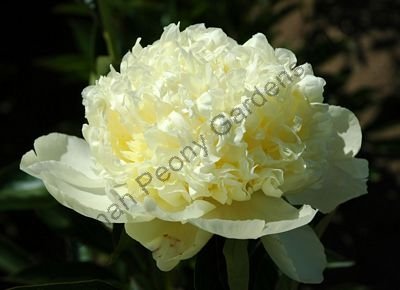 How to Grow and Care for Peonies According to Peony Paradise

Peony Paradise is otherwise known as Adelman Peony Gardens, in Salem, Oregon. Jim and Carol Adelman grow 500 varieties of peonies in their 25 acres of fields, and welcome visitors during their blooming season, from April 27 to June 16, every day. Carol Adelman is the author of “Peony: The Best Variety for Your Garden.” 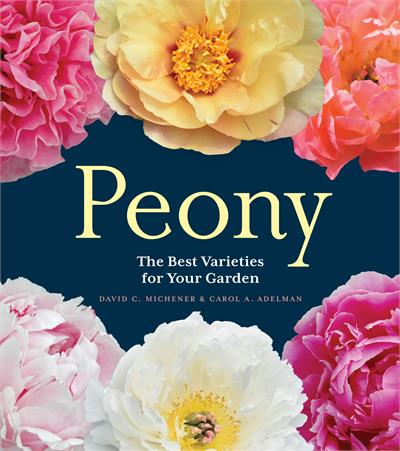 The peonies shown here are from their catalog,
and they ship roots between September 15 and October 15.

Flower Power With Jill has no financial relationship with Peony Paradise other than admiration for the Adelman’s passion for and knowledge about peonies.

According to Adelman Peony Gardens:

Choose a sunny spot (at least 6 hours daily) with good ventilation and well-drained soil. Spacing should be about 36″ to provide air movement around the plant. Loosen the soil sufficiently deep and wide to accommodate the peony root (1 foot deep and 2 feet around). If your soil is heavy to clay, mix in some potting soil or well broken-down compost. Mix a handful of tulip/daffodil fertilizer into the bottom of the hole, then put in some soil to prevent the roots from coming in direct contact with the fertilizer. Note: Bone meal and potash may be used in place of commercial fertilizer. (In the Willamette Valley and other areas with acid soils, add 1 cup of dolomite lime.) Do not use Miracle-Gro as it is instant release instead of slow release.

Do not plant peonies where Casoron herbicide has been used. 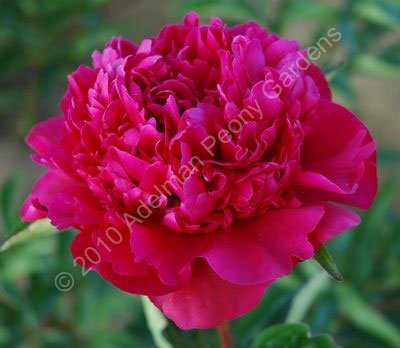 Big Ben, above, from Peony Paradise, does well in hot climates, carries a big deep red flower on a stiff stem and has a strong fragrance.

Plant your peonies as soon as possible after receiving them in autumn. The roots will keep for a while in the original packing materials if you are unable to plant them immediately, just keep them in a cool location out of the sun. Lay the root piece in the prepared location with the eyes pointing upward and cover it with soil. Some eyes may be pointing in the wrong direction but will reorient themselves to point to the sun, so if some are pointing down don’t be concerned. The peony ‘eyes’ are the growing points, which become the stems and flowers in the spring. The ‘eyes’ are white, red or pink in color and look like the tip of your little finger. There should be only 2″ of soil over the ‘eyes’ even in cold climates.

If you are in a wet climate, you may want to plant shallow and hill the soil up on top of the plant to make sure the water will drain away from the plant. Water it enough to settle the soil and remove air pockets. If it’s a dry autumn you may need to water to keep sufficient moisture for the peony to thrive.

Note: None of the plant will be visible above ground until it begins to grow in early spring, so you may want to mark the spot where it is planted. You should only expect 1 or 2 stems the first spring. The number of stems should double the next year and the plant should be quite full by the third season. You may also want to view our video,  ‘Planting and Care,’ on our web site: www.peonyparadise.com

Coral Sunset, below, an early peony, fades from coral to ivory; it won the American Peony Society Gold Medal in 2003. 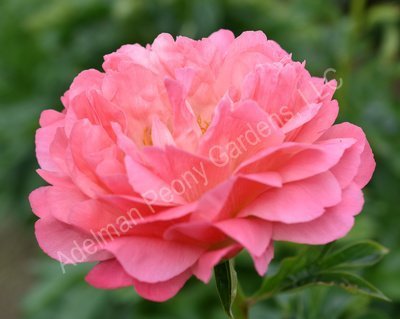 During the summer we recommend a deep watering. Too much water can cause the root to rot, so don’t overwater.

In late October cut the peony stems at ground level and put the stems and foliage in the garbage or composter. Apply a handful of peony or bulb fertilizer twice a year: in the spring when growth begins and again in the autumn when you cut the foliage down.

If botrytis (gray mold) is a problem in your area, contact your local garden center for control measures. Symptoms include sudden wilting of leaves, stems that rot off at ground level and buds that turn black.

Garden sprays used to control black spot in roses can be applied at 7- to 10-day intervals from first emergence until bloom. Preen may be used for weed control in peony beds.

Do not use Casoron around peonies. Check with your local garden center for instructions on chemical use. 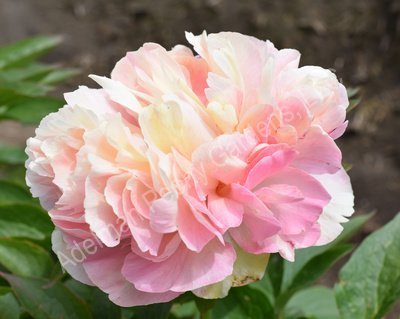 Most Peony Paradise prices for bare-roots are in the $20 to $30 range. This one is $120. Its colors range from yellow to light to dark pink. Not surprisingly it is called Lois’s Choice.

Prepare your vase by washing it with dish detergent and bleach. Fill the vase about 1/3 with water. Add a packet of flower food or plan to change the water every couple of days.

Remove all leaves that would be underwater in the vase, as they will rot, reducing the life of the flower. Immerse the flower stems in the water and cut off 1/2 inch of the stem underwater. This will allow water to adhere to the pores that uptake the water into the flower. You can then transfer the flowers to the vase.

Place the vase in a cool location out of direct sun. To open flowers faster, place them in warm water in a warm room.

To slow the progress, place them in dark, cool room. If desperate—add ice to the water.

Single, Japanese and Other Peonies

After going for the big fluff ball peonies, sophisticated gardeners and florists often seek something different. Here is one that Peony Paradise says is “not like any other peony.”

It is called the Walter Mains from back in 1957, what is called a Japanese peony, where the center parts, the stamens, are emphasized over the outer petals. In this case, Peony Paradise’s description says, “burgundy-red petals cup around a striking center of staminodes that are mixed red, gold and white.” Staminodes are stamens without their anthers, in other words sterile stamens. 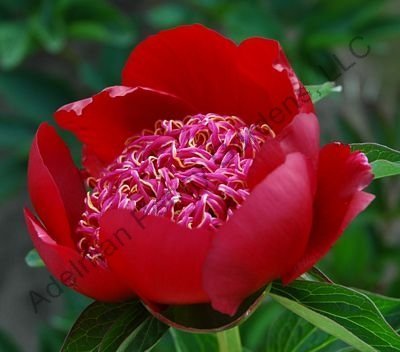 A similar Japanese peony is Rhapsody, a midseason with single petals on the outside and a more complex structure in the middle, this one even with a ruffle of mini-petals – and it’s very fragrant. 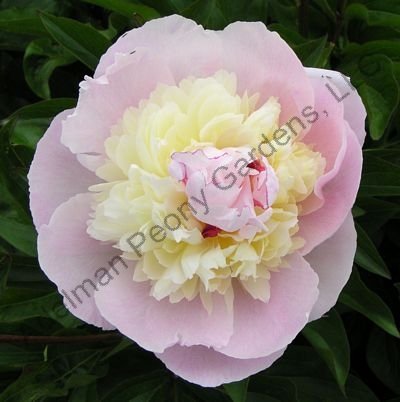 And then there are the single peonies, often the earliest peonies to bloom. They may stump friends visiting the garden, and they make striking cut flowers. Here are a few examples from Peony Paradise. The super early Chalice, with long, silky golden stamens, and the midseason Polly Sharp. 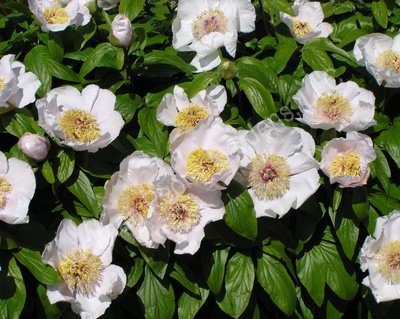 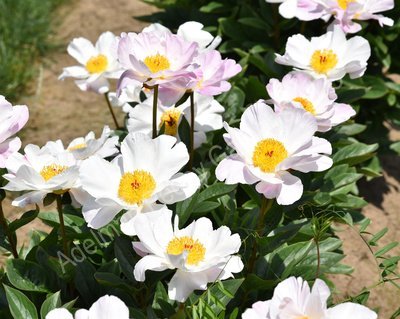 And lastly, another unique peony that grows as tall as a hedge: It’s called White Innocence, and can reach 4 feet all. It flowers in late mid-season and might baffle anyone driving by. It is hardly new, having been developed in 1947, but it certainly is not very well known. And it certainly was not seen back in the time the Impressionists were painting peonies in Paris in the 1870s and 1880s. 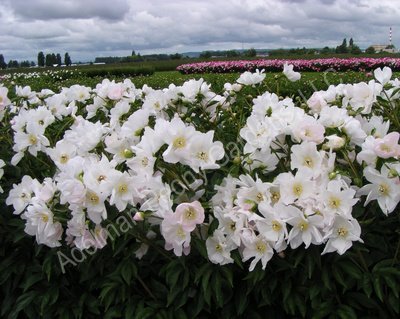 Pierre-Auguste Renoir featured Peonies in multiple paintings from the 1870s through the 1890s.  “[Peonies] had been introduced into the horticultural world of Paris in the 1860s, so there was still something of the exotic about them, and Renoir paints them rather solemnly and majestically.” 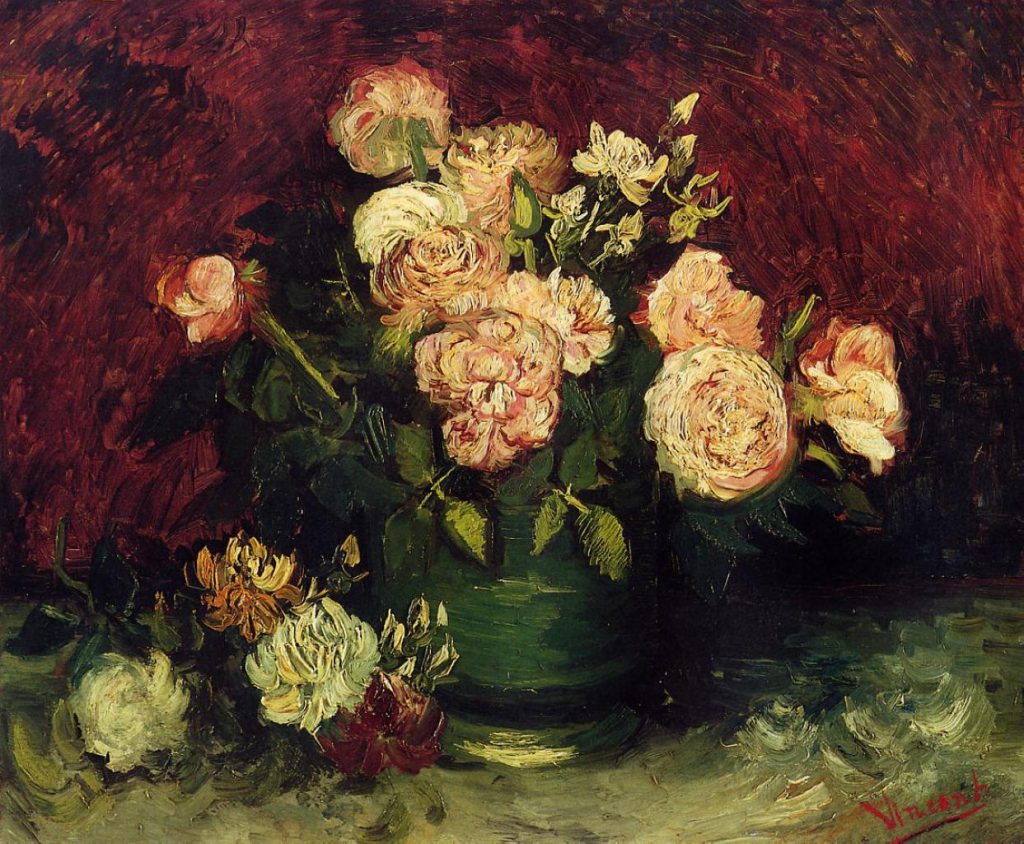 Bowl with Peonies and Roses 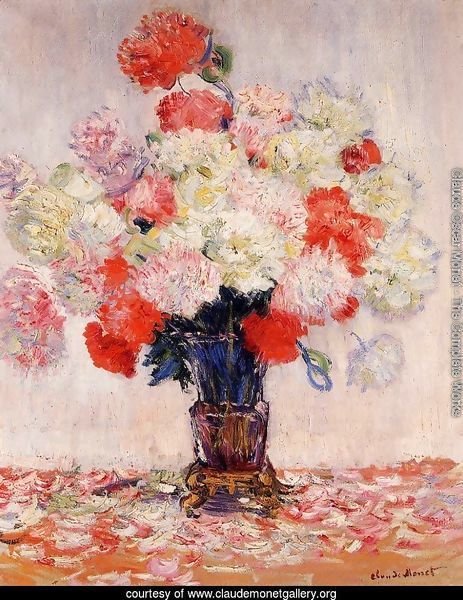 Edouard Manet cultivated peonies in his garden and painted them frequently.

The Impressionist artist Frédéric Bazille painted “Young Woman with Peonies” in 1870 as a tribute to his friend Manet, knowing his fondness for the flower.

And finally, if you have read this far: peonies do not require ants to open their buds. The ants like the sucrose in the flower buds, but the buds will open fine without help from the ants.