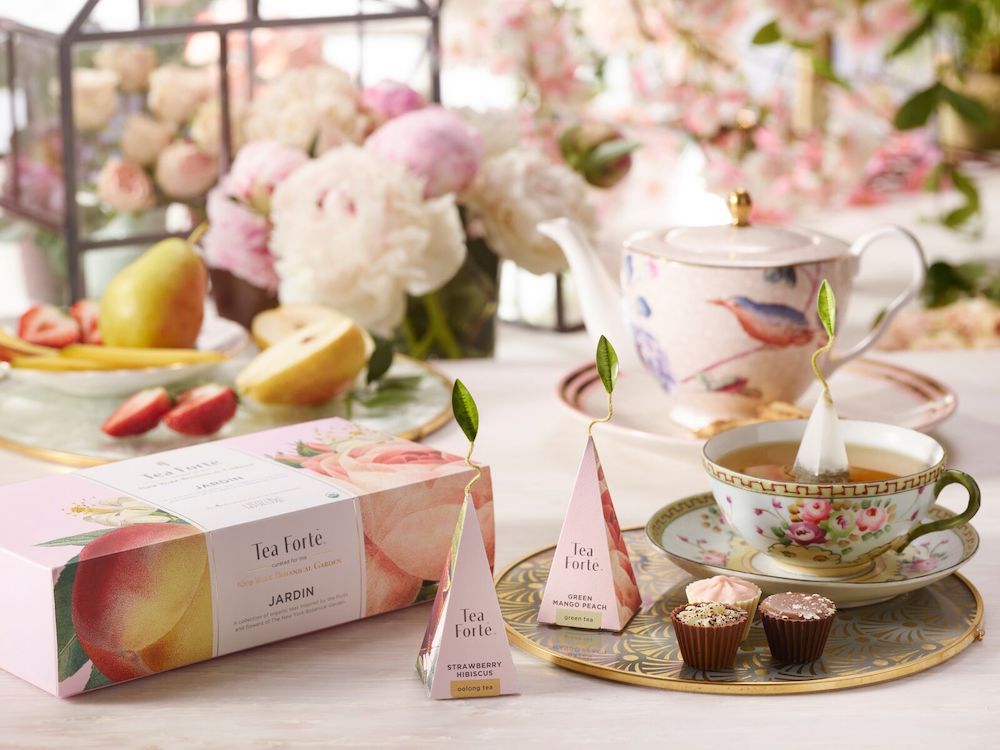 Some collaborations seem like a perfect fit, but first require expansive thinking.

Such is the pairing of the New York Botanical Garden and Tea Forté, which introduced a selection of floral teas called Jardin, inspired by the obvious – their world famous gardens.

The tea collection, which is sold at the New York Botanical Garden as well as many other shops, includes enticing flavors such as Strawberry Hibiscus, Chamomile Citron and Chocolate Rose. The latter, when mixed with a splash of milk, updates hot chocolate to a giddy high.

When the NYBG team approached Tea Forté, a Massachusetts-based tea company known for its innovative pyramid teabag and high-quality products, they offered more than just access to their renowned gardens and departments for plant research. This team came prepared.

Tea Forté was also given a chance to have access to The Rare Book and Folio Collections of the LuEsther T. Merz Library – the largest botanical library in the world. And housed in this glorious collection are some Pierre-Joseph Redouté prints.

Clearly, Tea Forté couldn’t resist that offer. After all, their founder, Peter Hewitt, an American product designer and graduate from the Rhode Island School of Design, is a connoisseur of design. With this opportunity, they would be able to use design prints from the person who is considered the Raphael of flowers, the greatest botanical illustrator of all time. 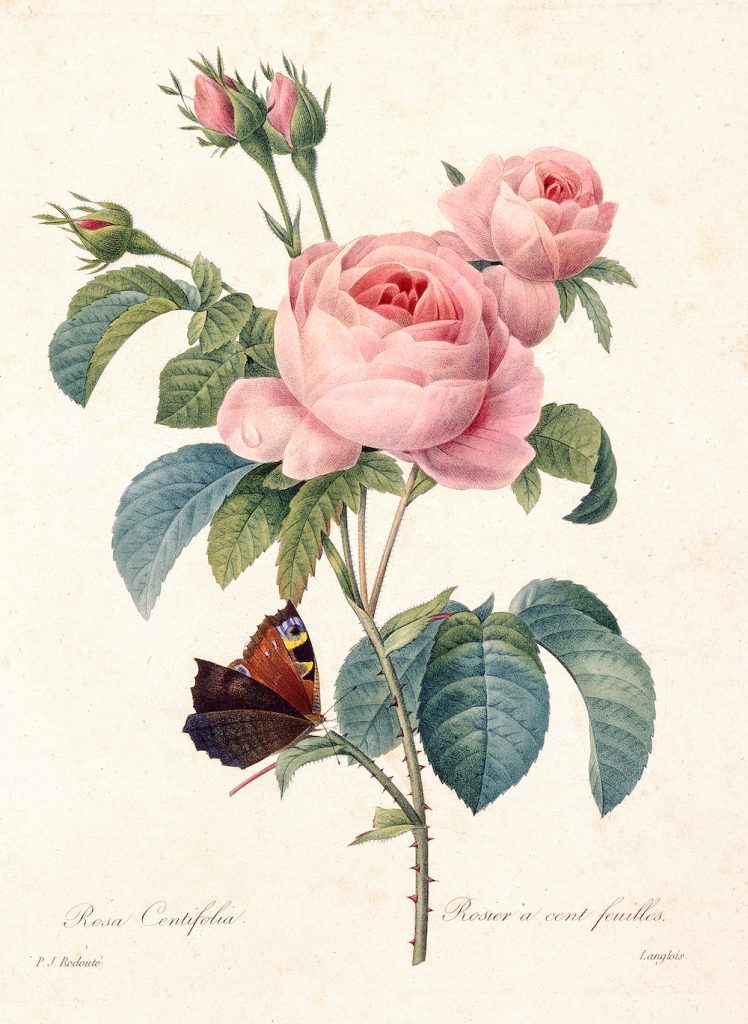 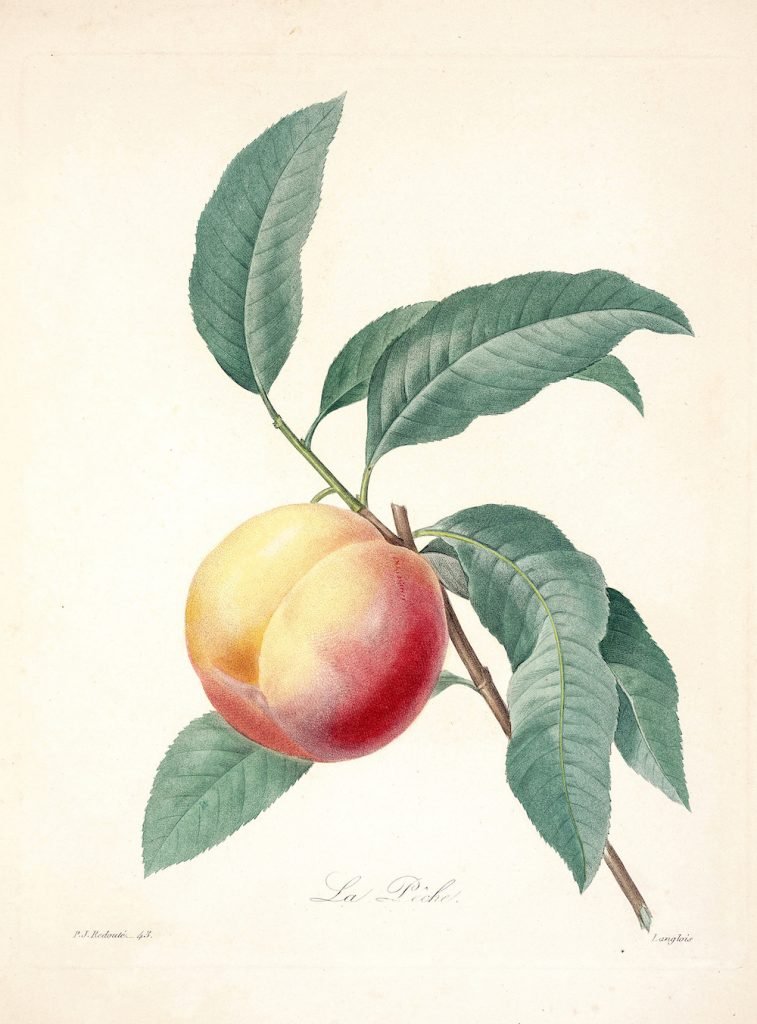 Born in Belgium in 1759, Pierre-Joseph Redouté gained international recognition for his precise renderings of plants. Serving at the courts of both Marie-Antoinette and Empress Josephine, he produced over 2,100 plates depicting more than 1,800 different species, many never rendered before. He chose to depict the familiar flowers of the French court as well as plants from places as distant as Japan, America, South Africa and Australia. His work subsequently inspired Flemish and Dutch flower painters including Brueghel, Ruysch, van Huysum and de Heem.

He was equally known for his sparkling personality, which definitely saved him several times from the guillotine.

At a high tea event this June to discuss the fusion of these two brands,  Stephen P. Sinon, Curator of Special Collections, shared how Redouté drew a white lily to cheer Marie-Antoinette at her bedside prior to her execution.  After Marie-Antoinette, his patrons included Maria Amalia of Naples and Sicily, and the wife of Louis Philippe I, the last king of France.

Naturally, Tea Forté’s team reveled in these drawings – and stories – bestowed upon them, eventually choosing to merge several drawings for their packaging. On one side is a lively peach with a lovely lily pushing forth and the other is a sensual pale melon rose with soft pillowing petals. 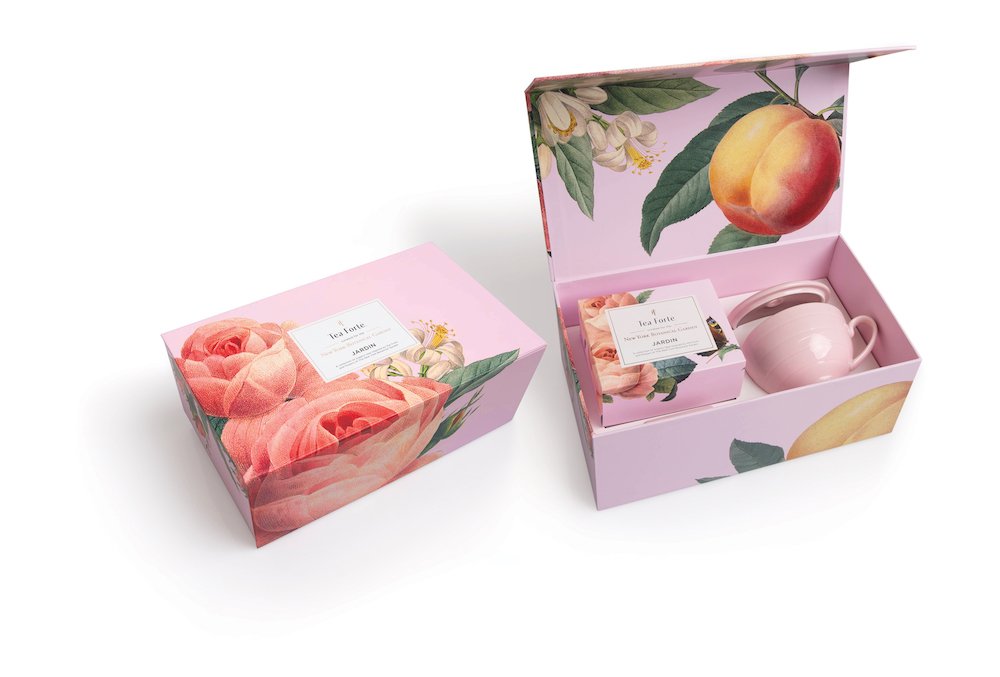 As part of their arrangement, a portion of tea sales will also benefit The New York Botanical Garden. Plus, NYBG is also selling not only the teas but specially made rose teacups with Redouté designs to accompany it at its museum store, which is a secret gem for New Yorkers.  Called Jardin Kati, it is a lidded ceramic cup that features an integrated stainless steel infuser. Double-walled design keeps each cup hot to the last sip.

“The reception for this new product has been phenomenal,” says Richard M. Pickett, Vice President of retail and business development. “Obviously, the combination of the artwork and the product is spectacular and very eye-catching. It’s been selling well.”

Plus the taste of the teas has been well received. Flower infused teas won them an award last year for their Hanami blend and now according to  Julia Khodabandeh, Tea Forté’s VP of Global Marketing, Strawberry Hibiscus has won an award for 2019.  Which isn’t that surprising. The flavor is bright and fruity, but the rose adds a calming stabilizing effect.

It also is a wonderful flavor for making iced tea during the summer months. Legend has it that a tea merchant was trying to sell hot tea during a sweltering day at the 1904 World’s Fair in St. Louis, Missouri. With sales slow, he asked a nearby ice cream vendor for some ice and the rest is history.

There is, of course, a long history of marrying flowers with hot water. We call those things herbal teas, using the word “tea” to mean something steeped in hot water. But hot drinks made without tea leaves go back thousands of years.

Chinese herbalists made blends that included many things, including flower petals, to make hot drinks aside from exporting tea leaves around the globe. Chamomile tea, made from a daisy-like flower, was popular early on, and is still popular, not just for its reassuring scent and flavor but for its reported effects of calming the nerves and improving a night’s sleep.

All of these hot drinks – including ones made with leaves and fruits – were dubbed in Paris “tisanes.” The word is now presumed to mean without tea. Ti “sans,” or “ti” “without” tea 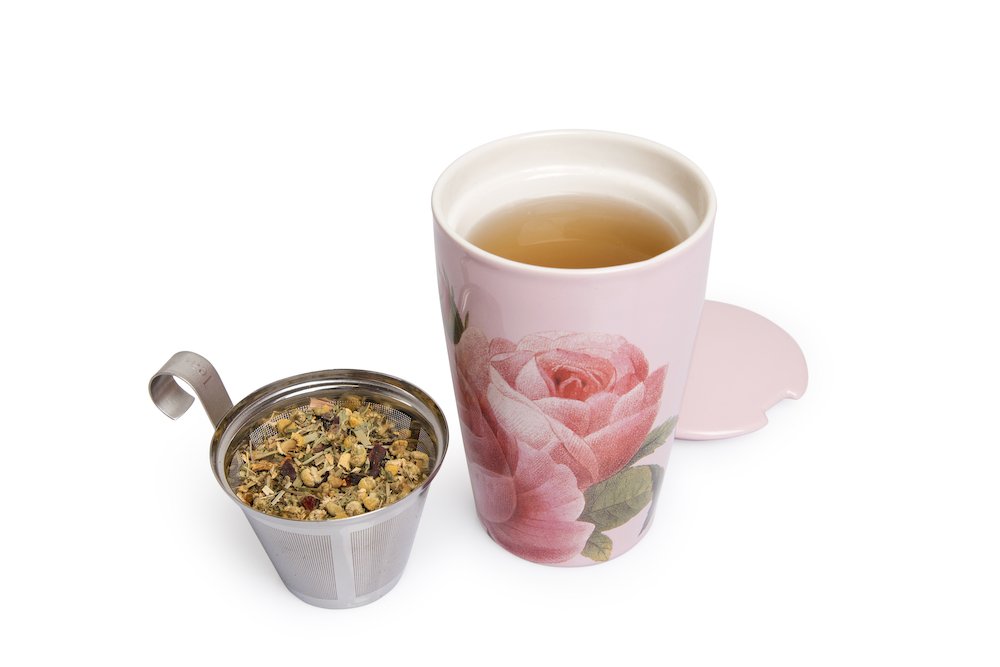 As NYBG’s Pickett said, this fusion not only of flavors inspired by flowers but of companies “is a perfect synergistic relationship.”

Other teas in the collection include Green Mango Peach and Vanilla Pear. Each signature collection has different artwork from Redouté beautifully incorporated on the side pyramid panel.