Chelsea In Bloom Turns London Into a Free Floral Festival

While the RHS Chelsea Flower Show requires coveted tickets to attend – and gets sold out quickly – anyone could enjoy the tangential Chelsea in Bloom, which celebrated its 10th year from 20 to 25 May 2019. 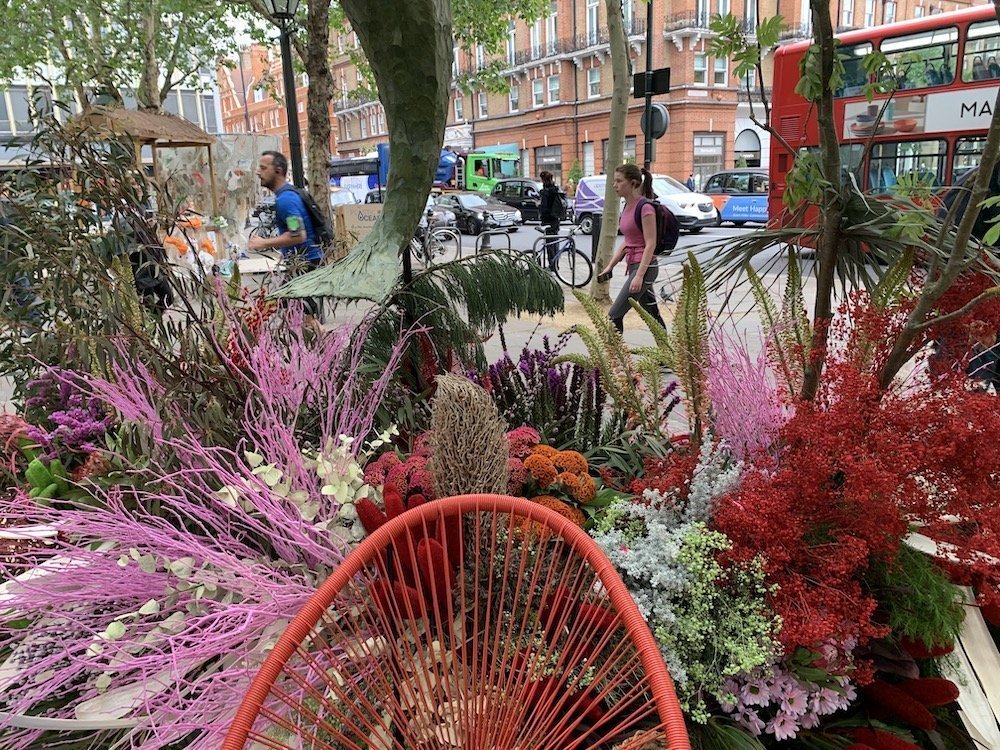 It is really a testament to the British love of horticulture that the participating places generously invested in this project, which this year supported Plastic Oceans UK. Each display had hundreds – and sometimes thousands – of blooms.

This year’s theme was “Under the Sea”  and each place competed for the coveted awards with creations that used oceanic creatures including octopus, whales, dolphins, crabs and an assortment of beautiful coral which lent itself to intricate floral designs.

Outside our hotel, 11 Cadogan Gardens, near Pavilion Road, we were greeted by Neptune’s Throne. Designed by Larry Walshe, this installation won a Gold for its lush use of flora. In fact, the talented Walshe also won another Gold for his rendition of a big green fish with kissable lips for Space NK Apothecary. 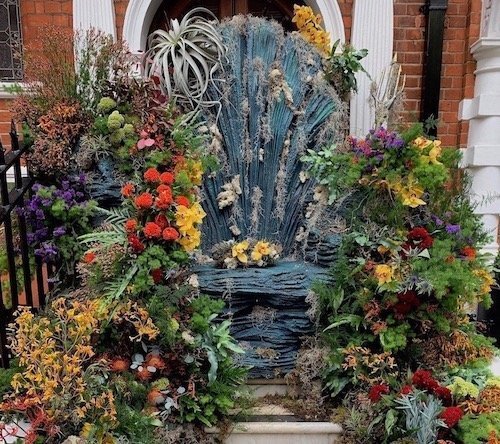 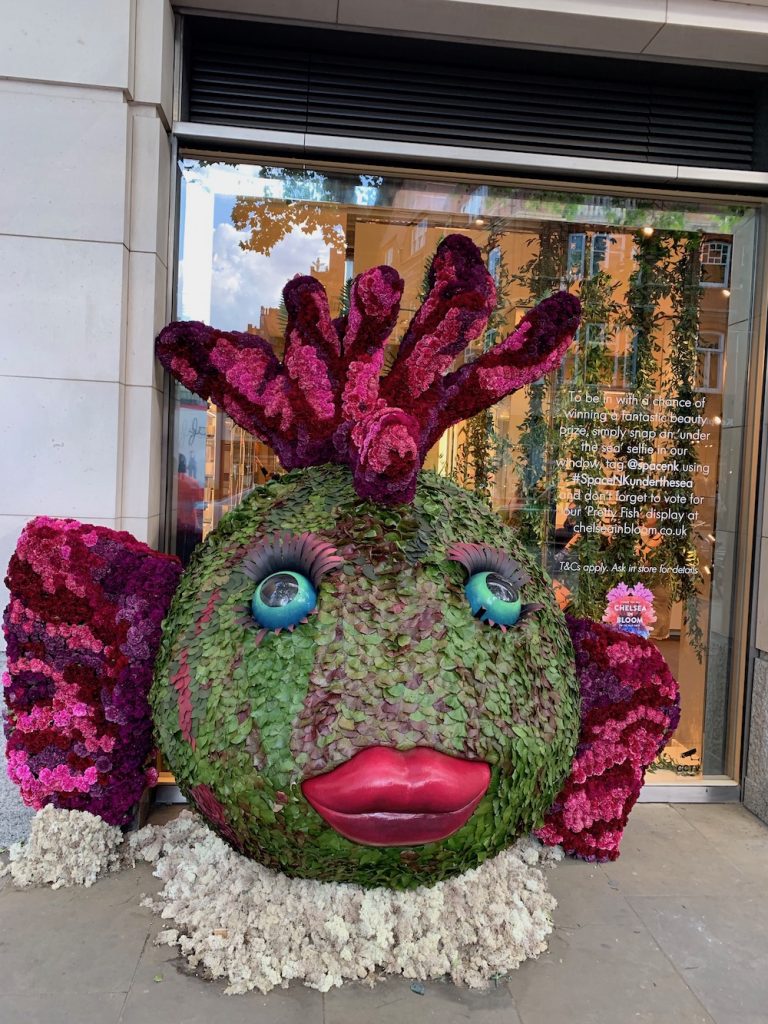 Walking a few steps away to Pavilion Road, one was greeted by a large-scale Orca whale shooting up into the sky with a base made of mixed blue shades of delphiniums, hydrangeas and gypsophila (baby’s breath).  Nearby the friendly octopus in front of Kiki McDonough’s jewelry shop won in the Highly Commended category. It was certainly a display that intrigued pedestrians as did the installation of a mermaid holding a mirror in front of Sarah Chapman’s Skinesis Clinic in Sloane Square, which won a Gold. 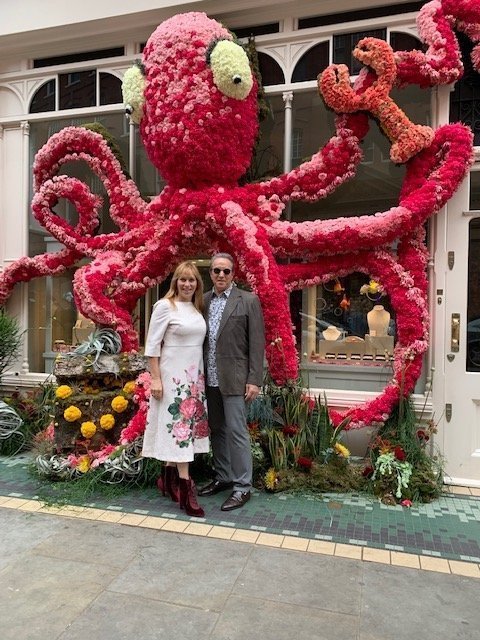 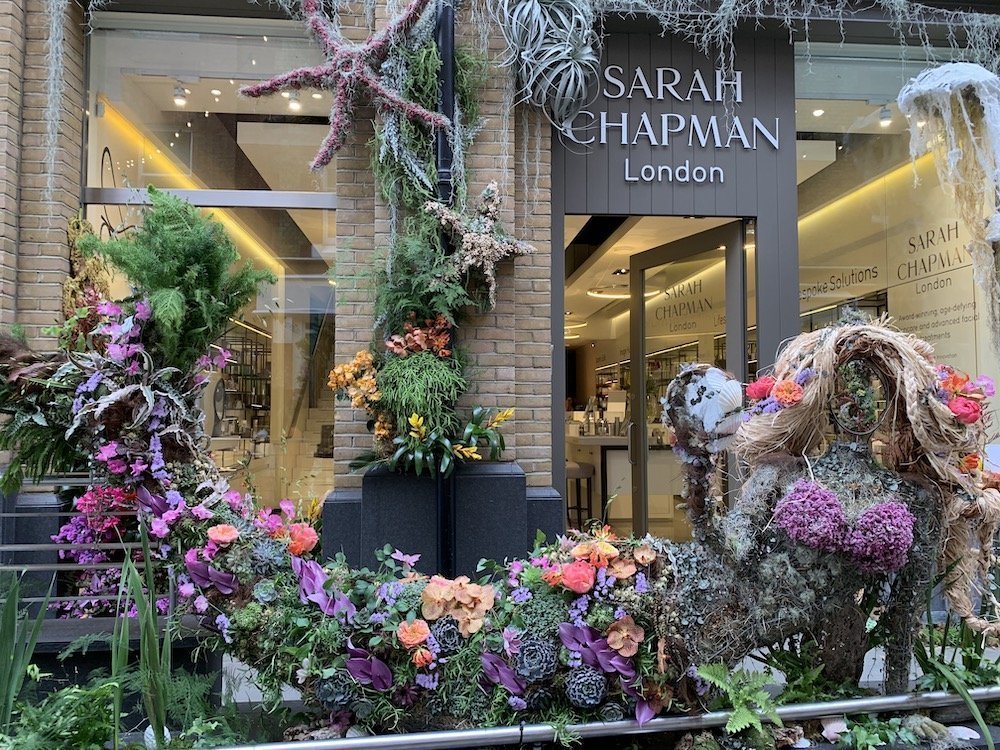 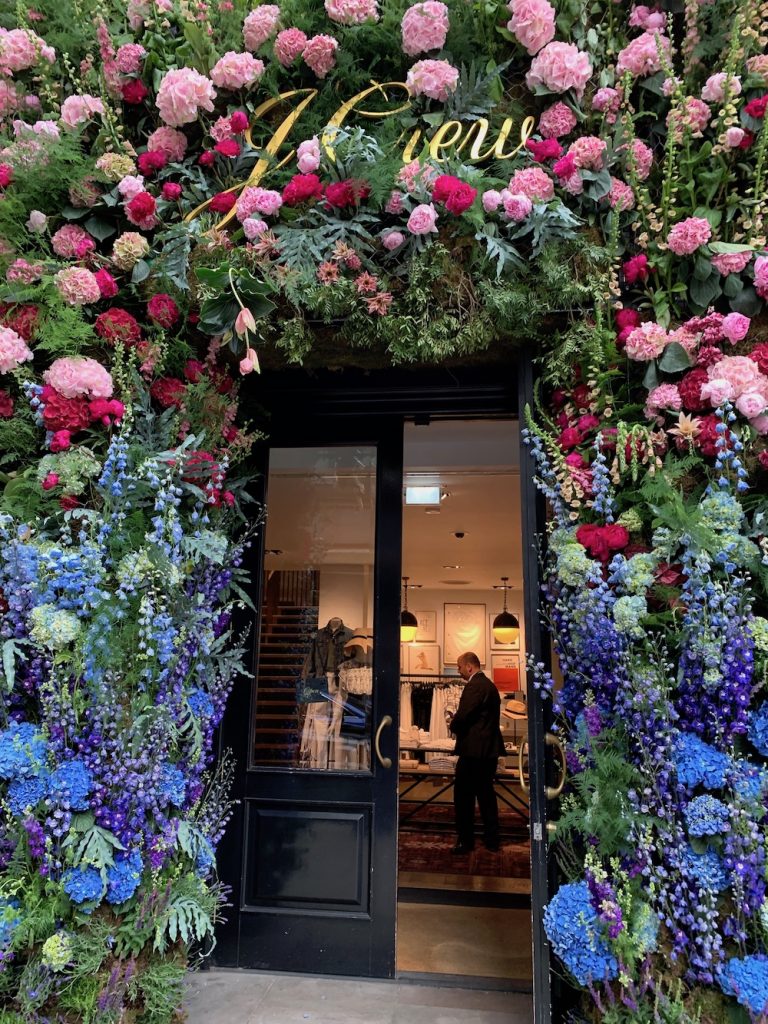 The Best Floral Display went to Hackett whose florist was WildAbout Flowers/Harlequin Design.  Though this was not my favorite. Judges liked its interpretation from Jules Verne’s “Twenty Thousand Leagues Under the Sea” and perhaps found the winding tentacles of the octopus amusing as well as the submerged divers wearing the store’s clothes. It was certainly colorful and fun. 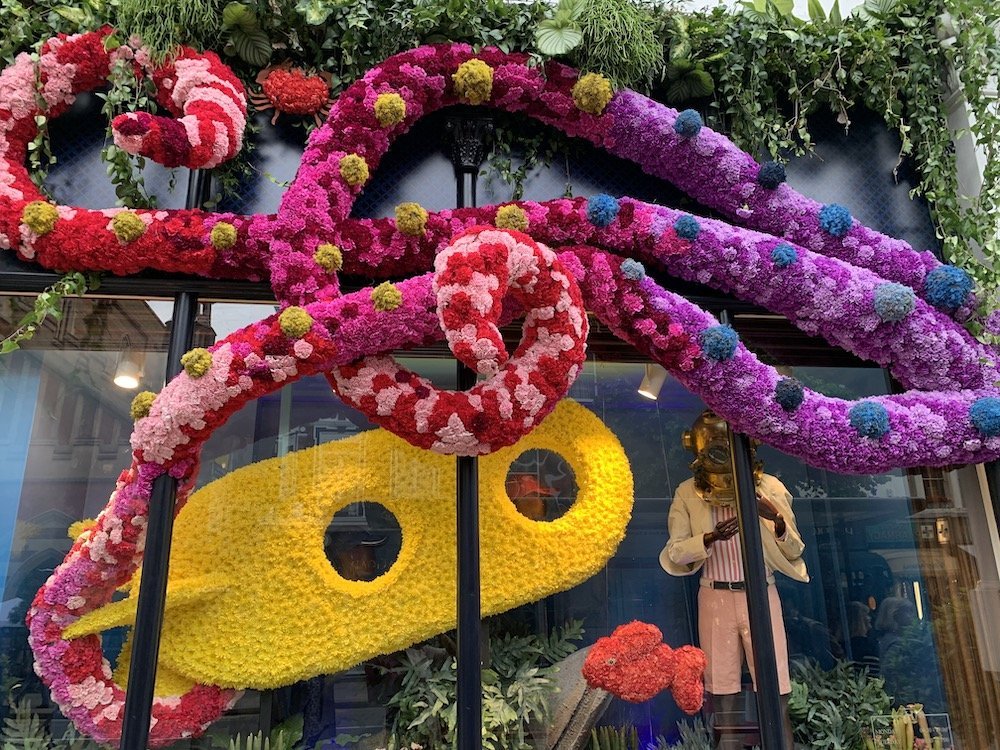 The most innovative award not surprisingly went to Marshall Wace, an alternative asset management firm, which had an elephant sitting on top of an aquarium filled with plastic waste. No other installation connected as effectively with the problems plaguing the sea. Making it more compelling was the fact that the debris was actually collected during a recent clean-up.  Created by Amanda Wilgrave of Flirty Flowers, it was made in collaboration with Surfers Against Sewage. Using hydrangea to act as a coral motif was also a smart choice as was the icon of an elephant, known for having a long memory. 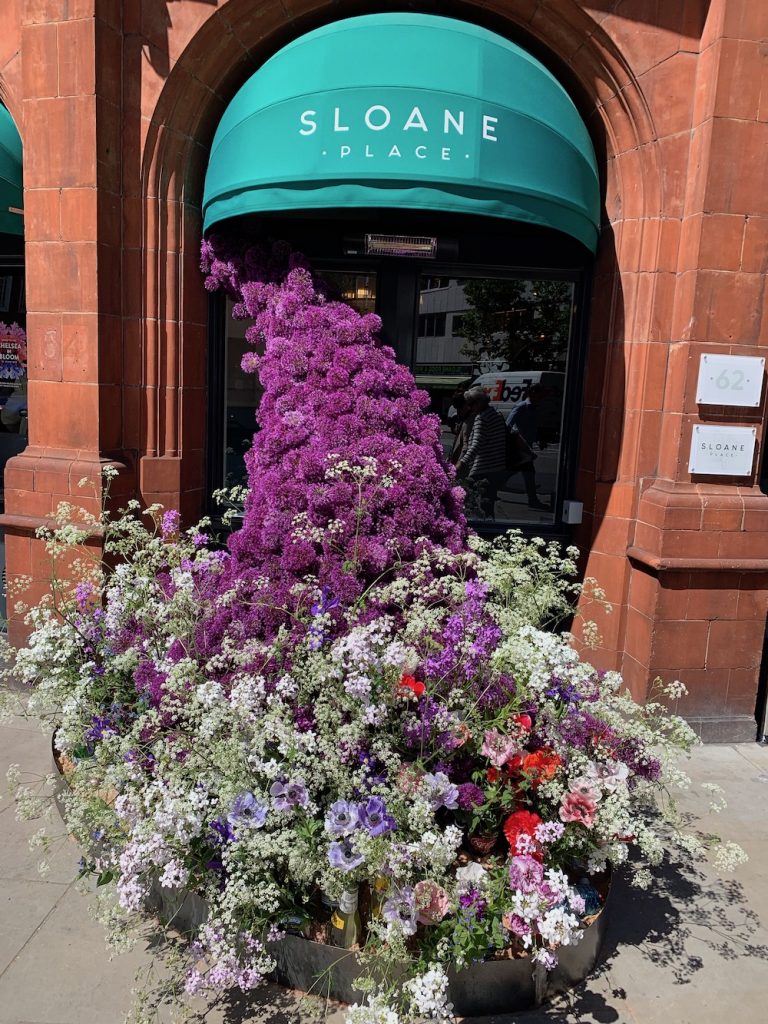 Other notable winners including displays by Smythson, Kiehl’s, Poetry, Oliver Peoples, Sloan Place and Poetry, whose display was designed by the popular Rob Van Helden. 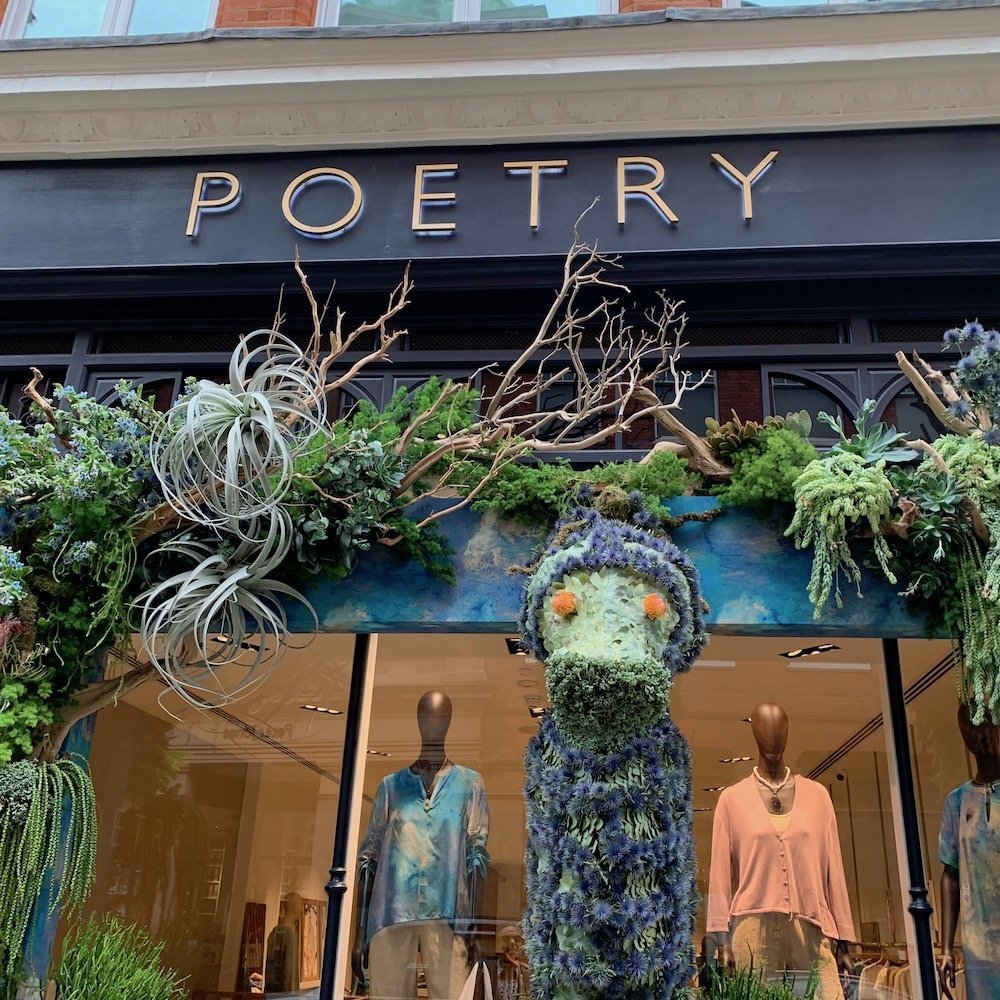 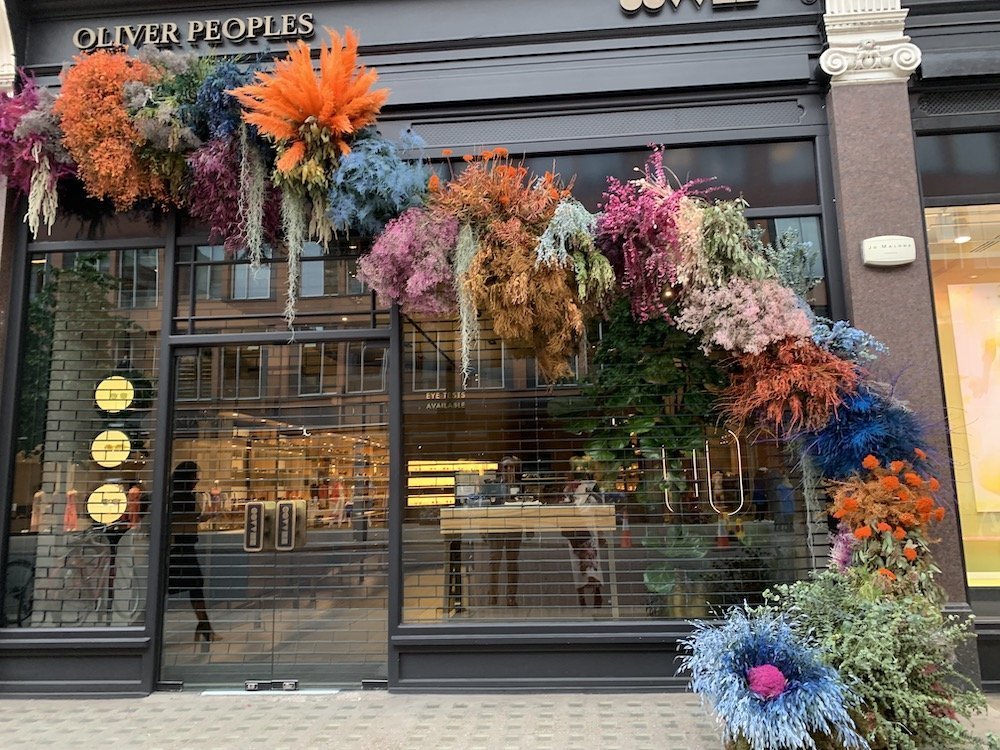 My favorite seahorse didn’t win any medals but I’m giving it an honorable mention. Loved how the florist used magenta and ocean blue flowers to create this installation. It really surprised me that this didn’t win and Red Valentino’s won one when this following design was so ho-hum. Nothing lush or particularly inventive. But aside from an esteemed panel of judges, there is also an opportunity for the public to vote which adds to the fun. 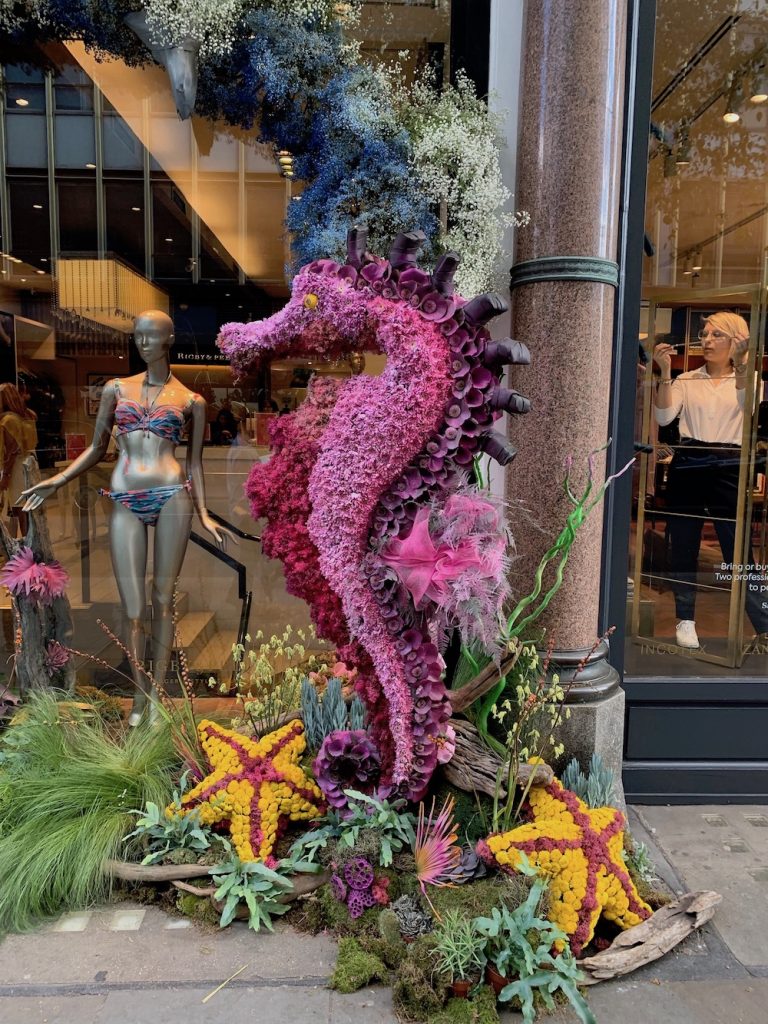 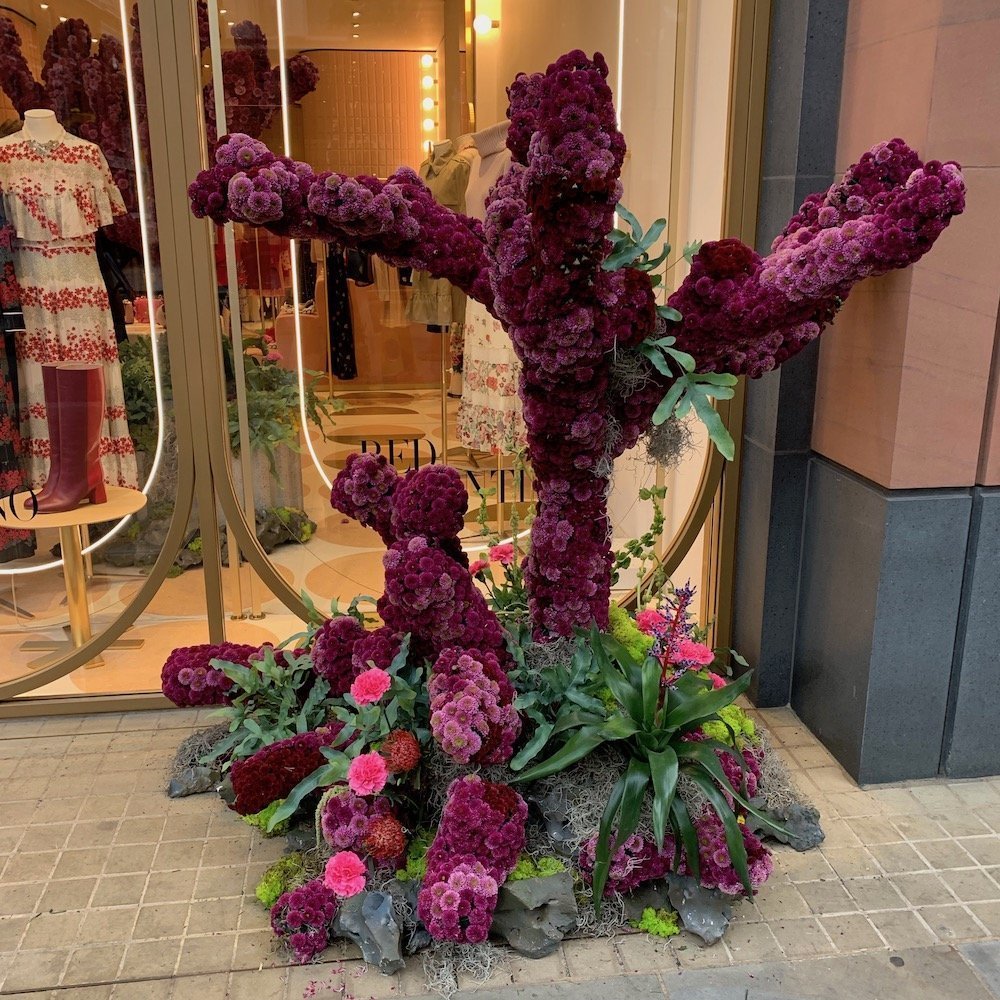 The truth is that everyone was a winner here if the measurement was in delighting the public. There wasn’t a display that didn’t impress. It was just a question of which one you may have liked more in comparison to all the spectacular creations. Not only did people stop to take pictures with the displays, but one guy used his dog as a model to showcase the flowers in front of Dubarry. Designed by Rose Hamson Flowers, in the Cotswolds, it won a Silver. Even the dog’s bandana matched the blue in the display and you can imagine this picture being framed on someone’s mantle. Onlookers were impressed the dog stayed still for so long so his owner could take many pictures. 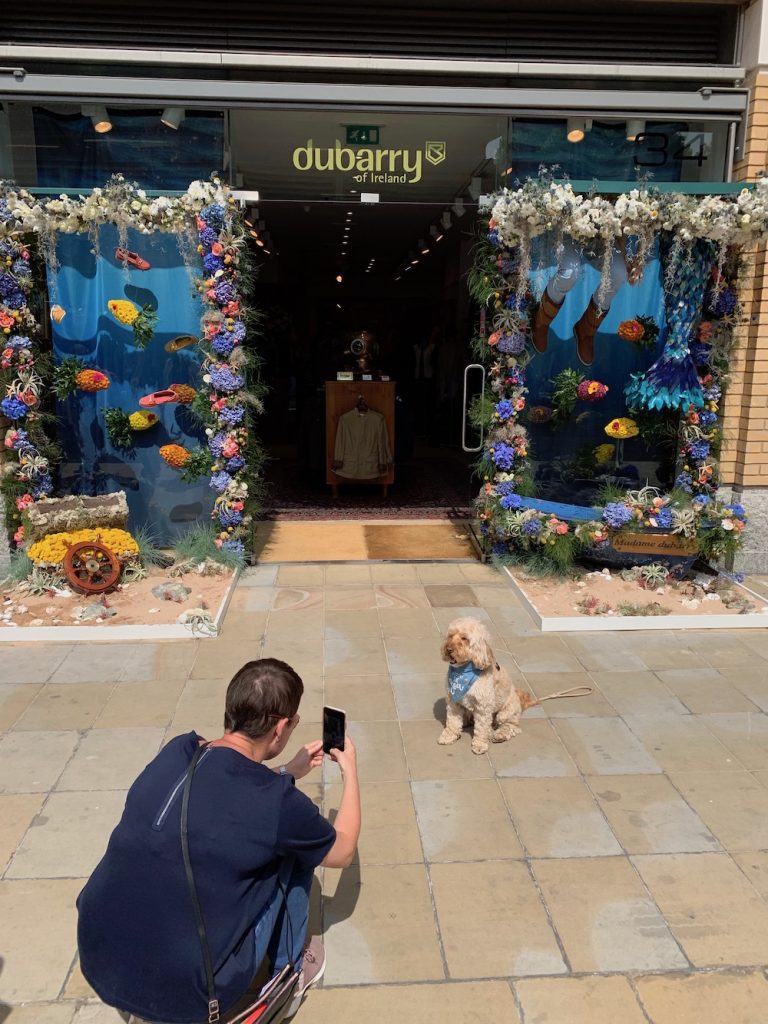 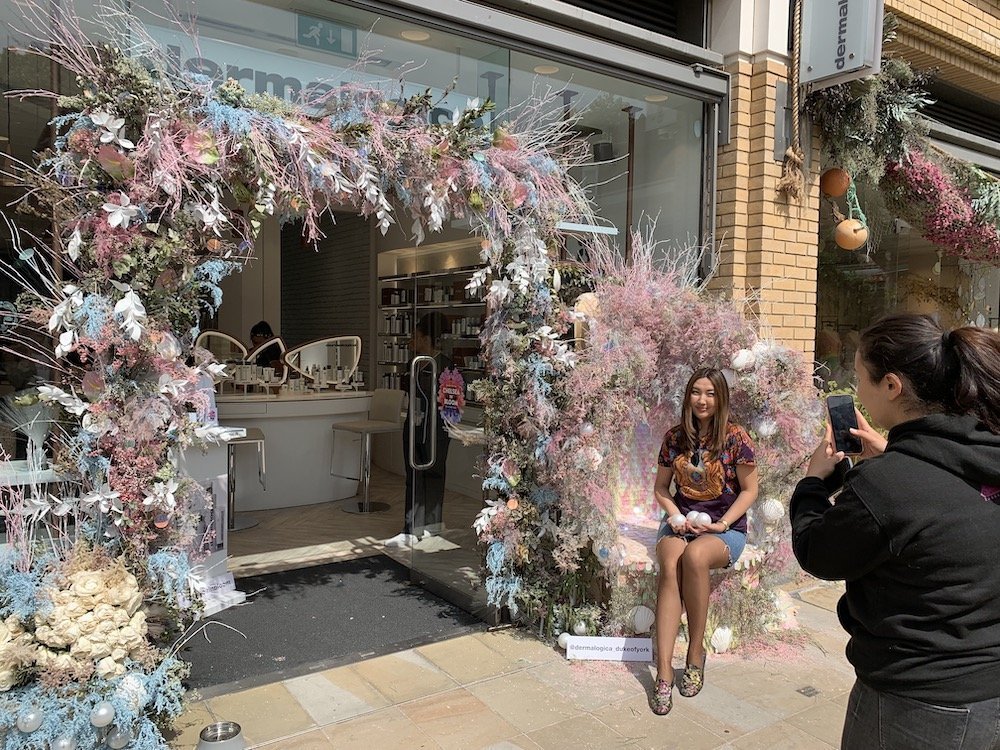 Many of the stores wisely created designs with seating opportunities for better photo opportunities. It was really one of those rare moments when flowers literally made people stop in their tracks and smell the roses as well as peonies, hyacinths and a variety of other flowers. Everywhere you walked throughout Chelsea, you were enveloped in smile-invoking flora that sparked conversations between strangers, all united by this wondrous display of creativity. These colorful, inventive designs also welcomed the spring and summer seasons and made us appreciate nature in all its glory. Chelsea in Bloom was a memory to be treasured.

All Photos by Jill Brooke