When you gather some of the world’s most celebrated florists to create floral sculptures inspired by New York’s iconic characters, you know it’s going to be eye-popping, jaw-dropping fabulous. And it was.

Adam Glassman, Creative Director of O, The Oprah Magazine, master florist Raul Avila and I were asked by Fleurs de Villes  – a Canadian event design team that developed this concept – to judge inventive creations that required these artists to work for two weeks in super drive.

The displays are showcased at Hudson Yards from October 25th to November 3rd. 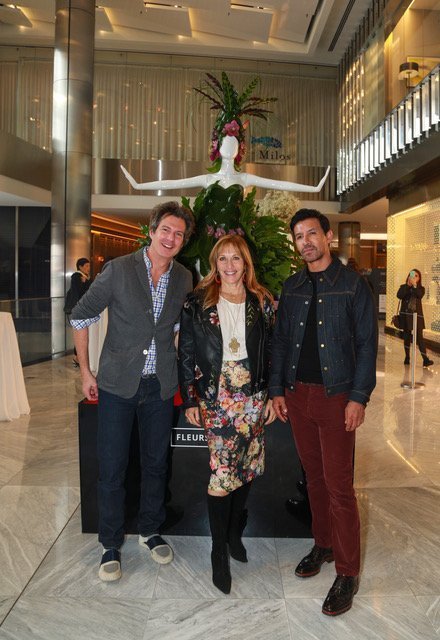 The Fleurs de Villes’ concept of mixing fashion and flowers is proving to be catnip for people to visit stores. The display by Botanique Flowers was a tribute to Carrie Bradshaw and “Sex and the City”;  of course, Sarah Jessica Parker’s character was carrying a Manolo Blahnik bag. Their design had a rose-clustered bodice with what looked like ivory astilbe for the miniskirt. But it was actually a fern called Nephrolepis.

What I particularly liked about this display was how the detail roses were at peak ripeness. I literally gasped at how the Botanique team peeled back some of the petals with an artistic flourish. It’s called reflexing the petals, so the bud could burst forward in all its beauty. This happens of course when you buy high-quality big head roses. 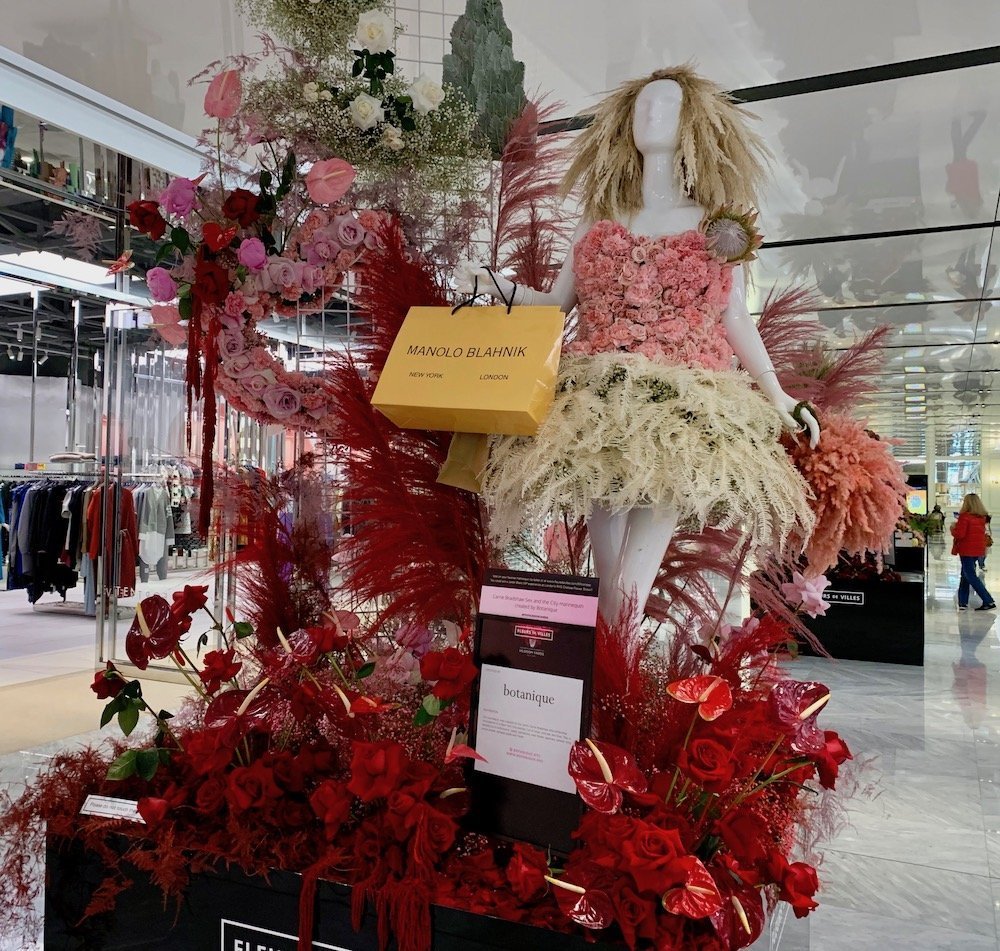 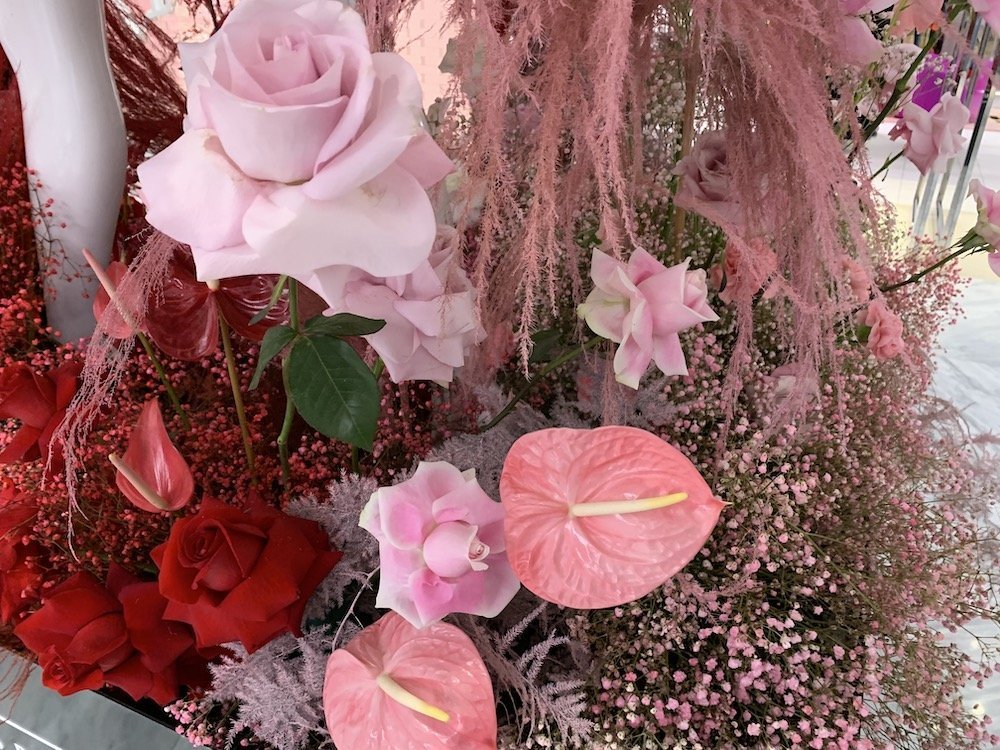 Notice that pink rose next to the anthurium.

Adding to the stress of creating a competitive display was the ongoing political strife in Ecuador that is impacting exports of coveted roses.  Botanique and other florists had to scramble to find alternatives. Originally, the team had wanted an Esperanza rose, but then luckily found this Secret Garden variety in the same color palette from a U.S. grower. 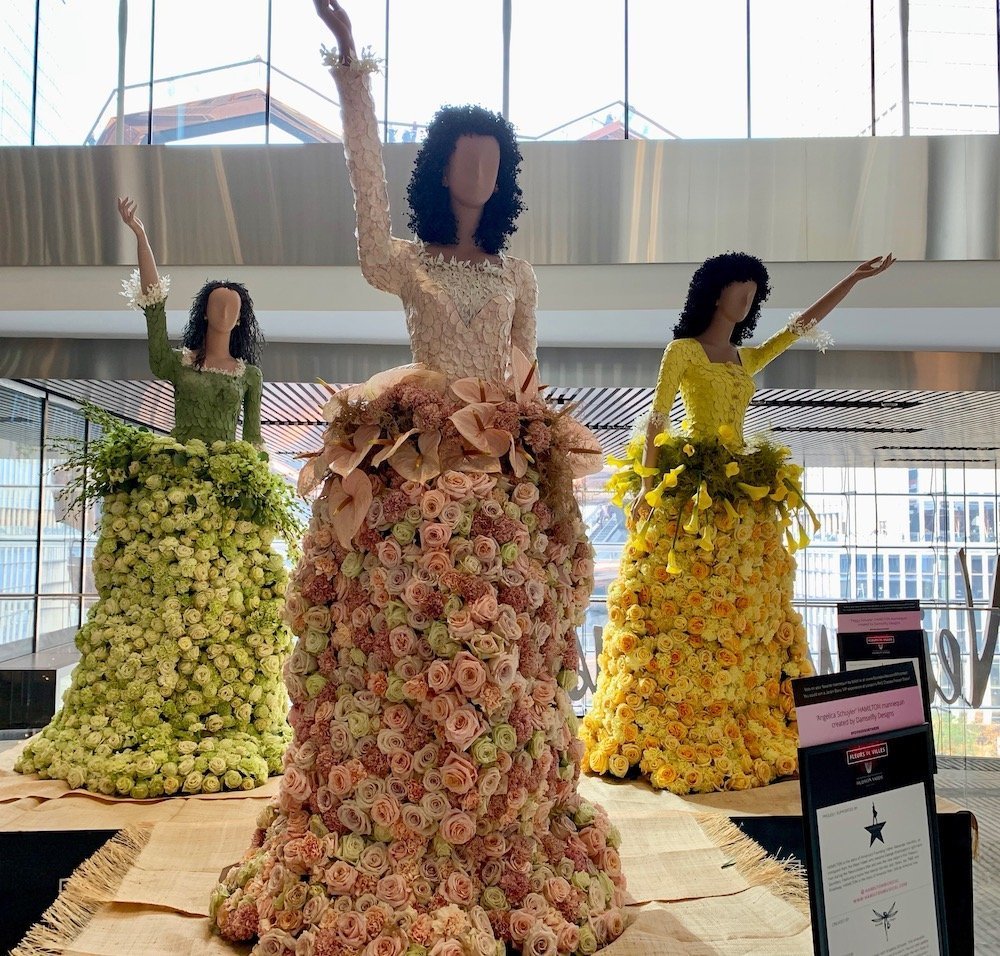 Of all the Broadway shows in recent years that intersected modernism and multiculturalism, the musical “Hamilton” became a New York and worldwide sensation. Damselfly Designs’ Brenda LaManna came up with the idea of creating designs for the Schuyler sisters – one of whom married Hamilton. Damselfly Designs actually worked with “Hamilton” costume designer Paul Tazewell’s sketches for their floral design.  Flower Power Daily was there to witness the first time he saw it.

“I’m really blown away,” he told me. “They’re beautiful and a great representation of my designs.” 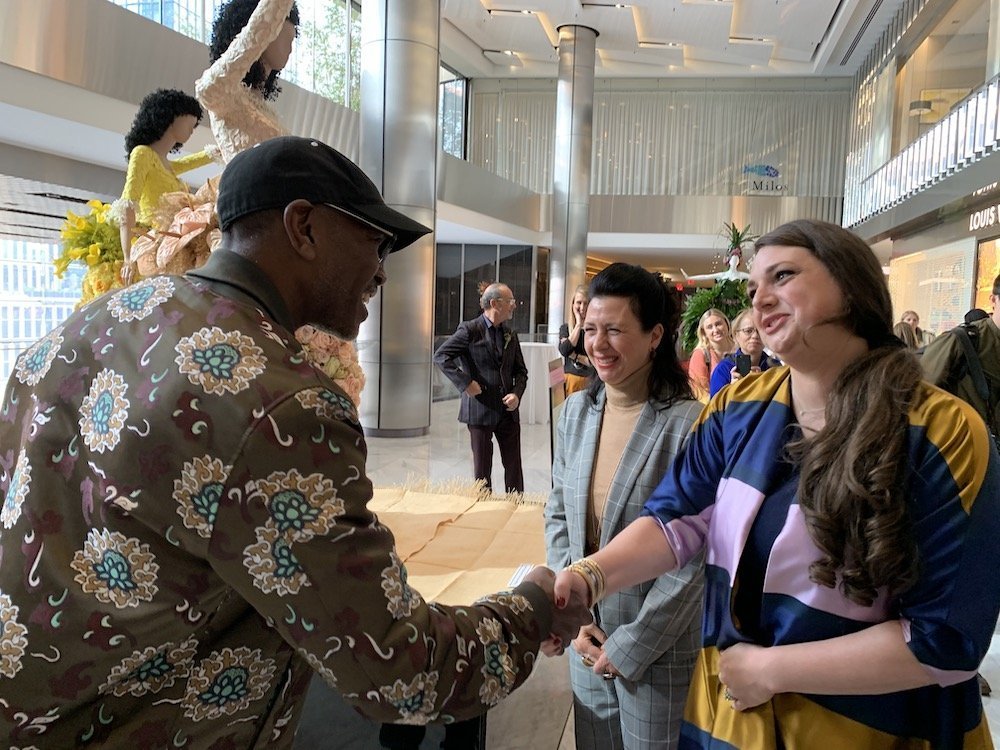 To create a flowing skirt, the Damselfly team mixed different colored roses – apple green, pink and yellow – with strategically placed carnations to create the illusion of movement. To separate the blouses from the skirt, they showed their creativity by opting for yellow calla lilies, blush pink anthurium – which are hard to find – and orchids that will bloom throughout the show.

To create the shimmering effect on the bodice, the team used a seed pod called Lumeria. They applied it over dyed eucalyptus leaves and the layering created that iridescent effect.

There were so many gorgeous displays that it was hard to pick the winners. The categories we were asked to judge were Most Realistic, Most Original and Best in Show.

I have to confess that the “Hamilton” display was my favorite for the category of “Most Realistic Dress.” But it was a democracy and my second choice was my esteemed colleagues’ first choice so the following won. This dress by the talented Fleurs NYC Floral & Event Design was sleek and sensual and the way they used baby’s breath was airy and elegant. Plus weddings evoke love, so it’s hard not to fall in love with this dress. And Most Realistic means a dress for current times. 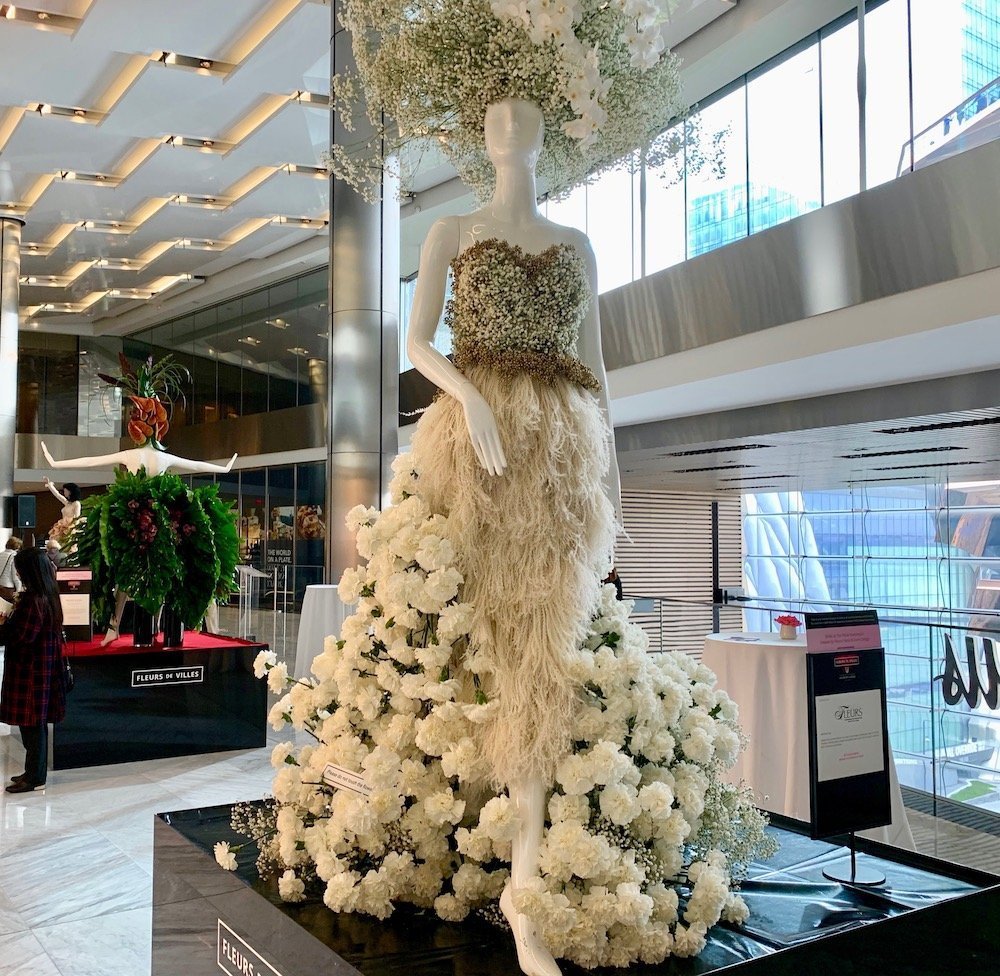 For the Most Original category, Pinstripes & Peonies won for the following display, which had a punk theme. After all, British fashion did inspire so much of American fashion. These girls pulled it off despite their plane being delayed and them having no sleep for almost 48 hours. The garnet-colored roses popped and the bodice did look like leather. The blue and white flowers at the edge gave me pause because I prefer things to match.  It really was the back of the dress that dazzled. 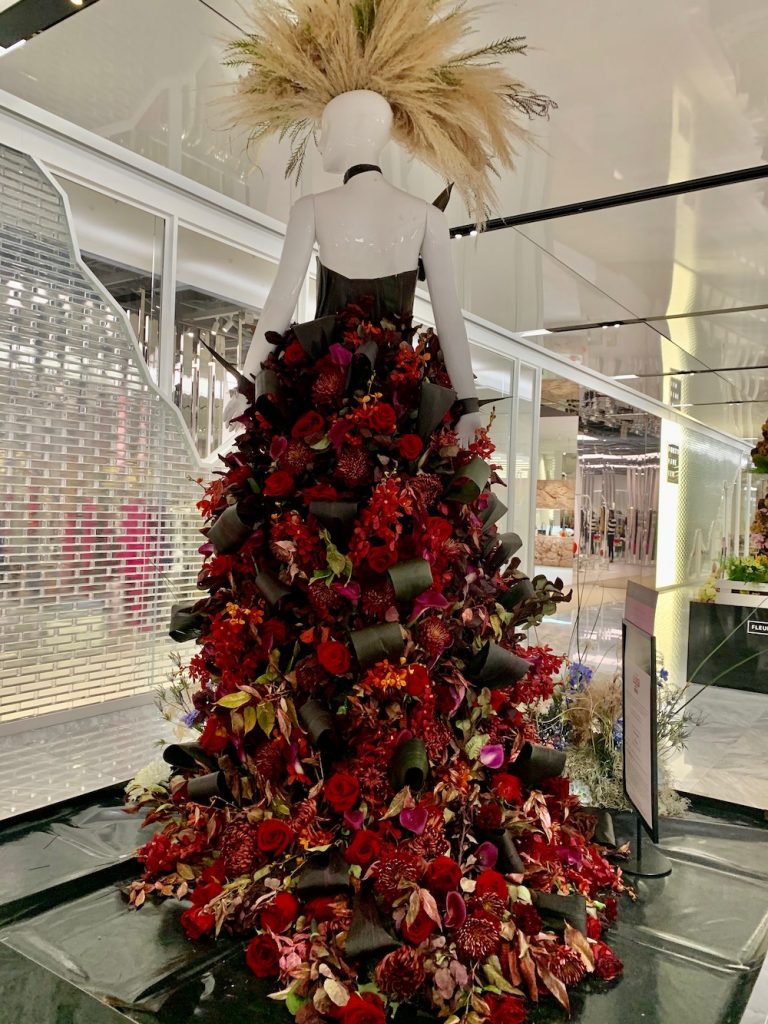 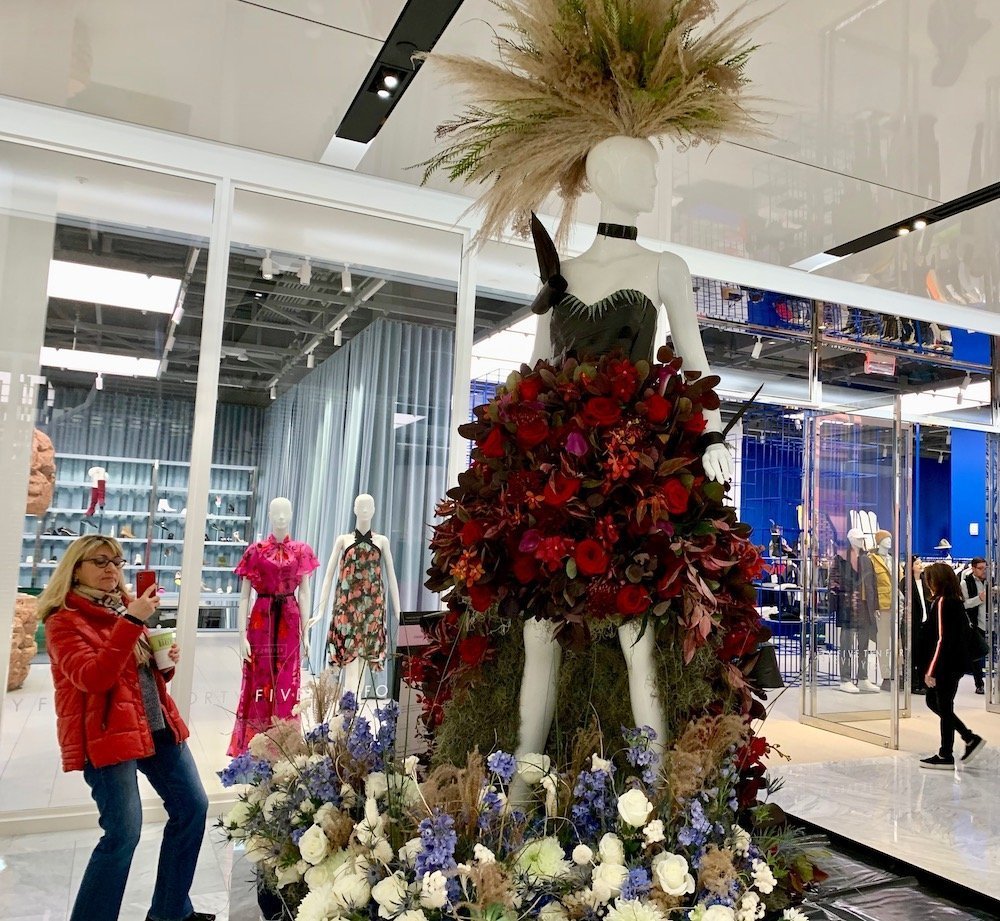 One of my favorites, which came in second in this category, was created by the Northeast Chapter of AIFD, the American Institute of Floral Designers. Another talented florist was scheduled but, sadly, had a heart attack – which immediately accelerated the stress level of the Fleurs de Villes organizers. Luckily, the Fleurs de Villes team are pros and reached out to AIFD’s Laurie Lemeck, Theresa Colucci and Darcie Garcia. These can-do girls came to the rescue and miraculously managed to create this gorgeous autumnal display inspired by the Jardin Blanc restaurant at the Chelsea Flower Show. Their mission was to incorporate a garden theme with food flourishes. Check out the cabbages and carrots.

“Others could work in their studios but we literally had to create this in a makeshift design room on-site in just 24 hours,” says Theresa Colucci, who owns Meadowscent Flowers in New Paltz, New York. Mission accomplished. It was earthy, warm and full of the colors of the season with roses, dried hydrangea and alstroemeria. 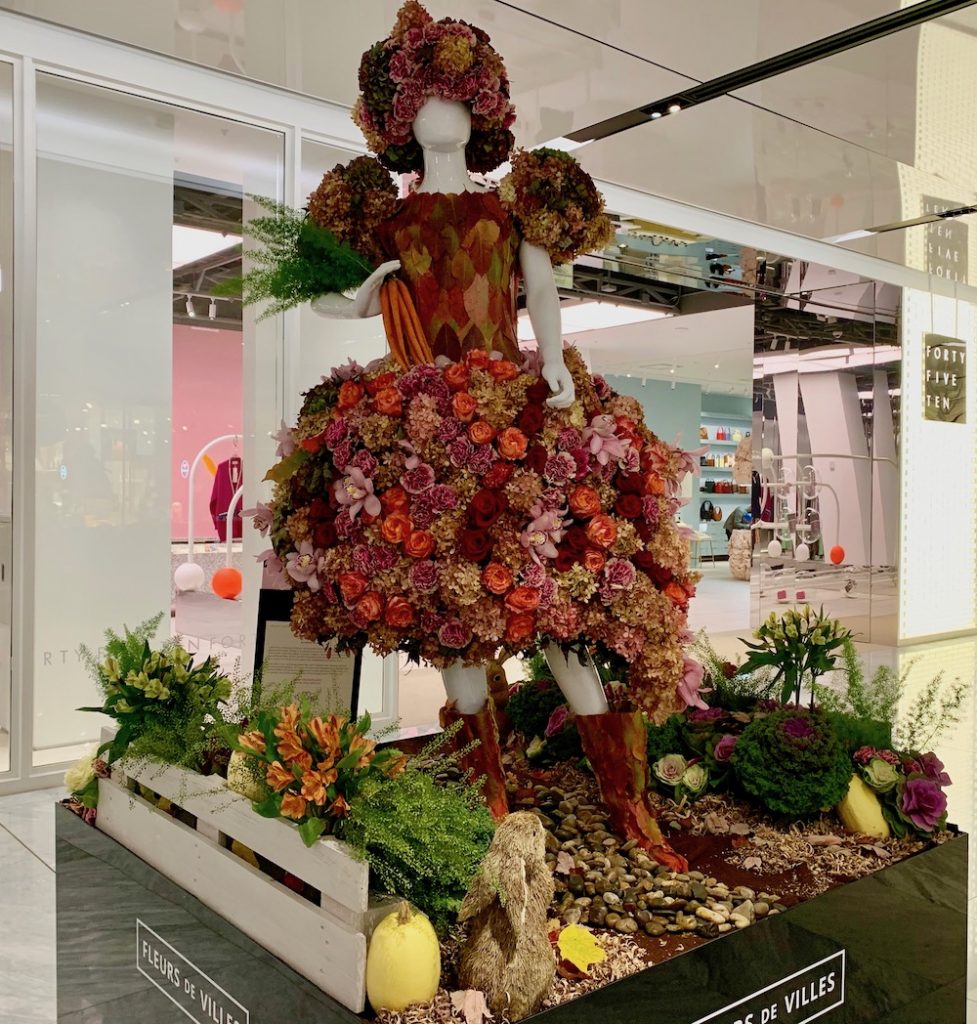 The Best in Show was unanimous. Cyndi Lauper interpreted by Villanueva Designs.  As owner Juan Villanueva explained, his inspiration came from the artists of the ’80s, when partying was at its peak.

All of us commented on the boom box that accompanied the colorful concoction.

The judges all went crazy over the fishnet stockings. “That took hours,” Villanueva admits. His team tirelessly cut thin strands of tea leaves to accomplish that feat. The boot was a work of art.

This display just made people smile. Passersby beamed in delight upon seeing it. The Star of India greenery was a great detail that made the skirt feel fertile and fun. Each flower had a distinctive flavor and texture, which also made it a winner. 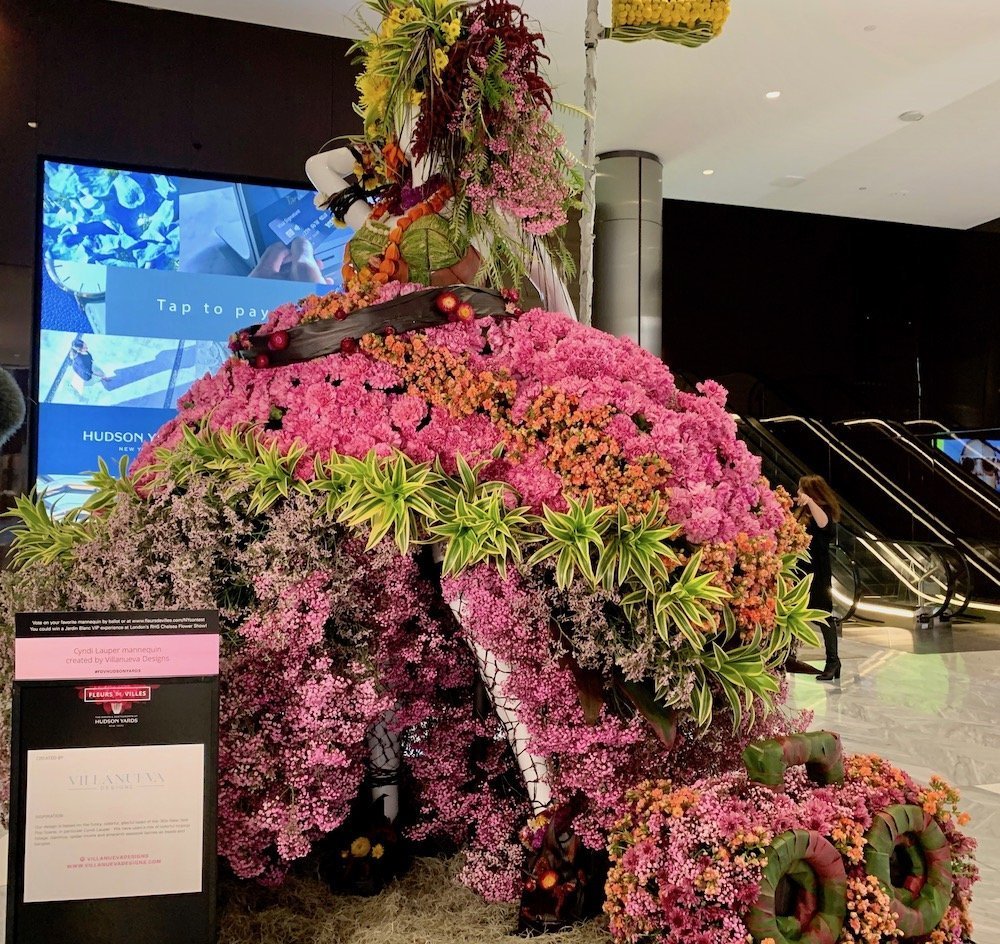 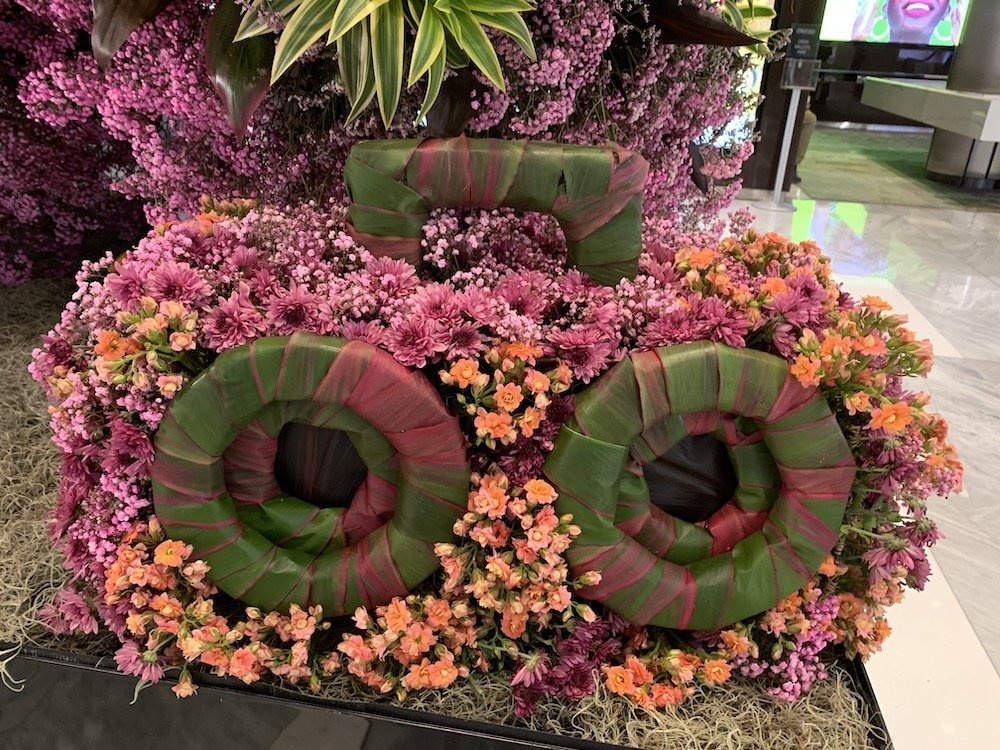 Seeing this display, people were reminded of Cyndi Lauper’s song, “True Colors.” The design was a rainbow of colors that collectively made a statement that fun and joy are nearby. Villanueva achieved everything in this display – Originality, Best in Class for design concept and also the realistic interpretation of its concept.

Because I gravitate to flowers like a heat-seeking missile, I couldn’t fully appreciate Oscar Mora‘s entry. This famous florist is known for his abundant, lush flowers. His entry was conceived as someone going to the Metropolitan Museum Ball.  But I asked, where are the flowers? 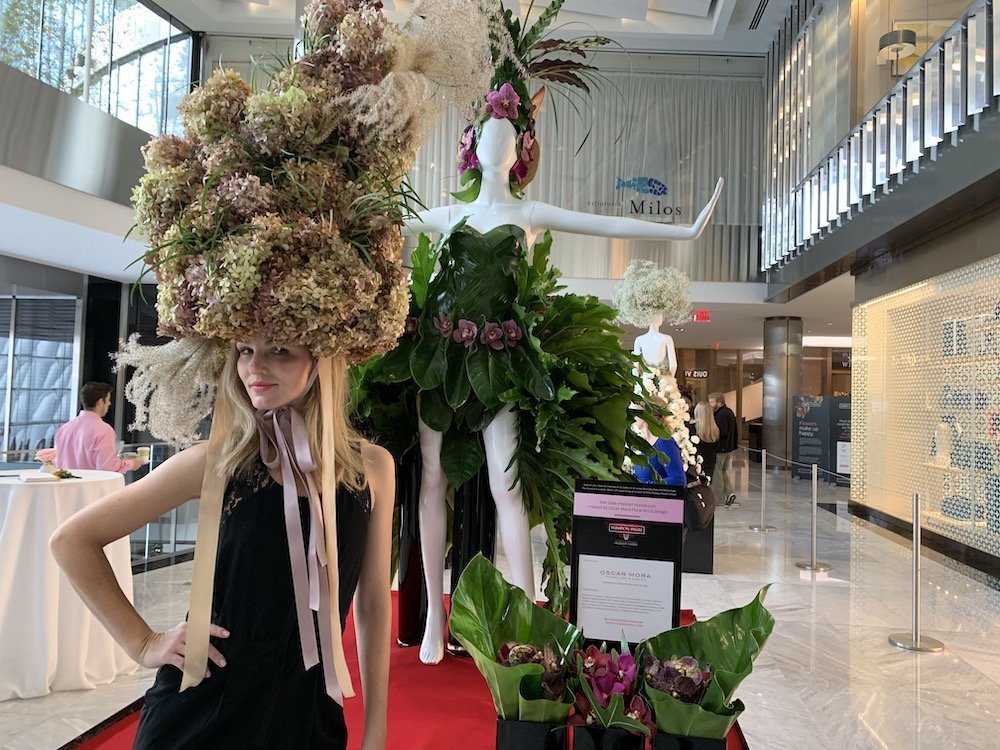 Upon reflection, I realized there was a genius to simplicity. His lush leaves were airy and perfectly assembled along with the orchids. But I hunger for more flowers, so in my book, this wasn’t a winner.

Worship Luxury florists used Lady Liberty as its inspiration. Call me old-fashioned, but I wanted to see red, white and blue represented in this design. Instead, they used purple orchids for their bodice, which in the language of flowers could be a celebration of multiculturalism. However, hyacinths or even the humble carnation dyed blue would have swayed me to vote for them. Plus, part of the back wasn’t fully draped in flowers. But the crowds loved everything and definitely stopped to admire this worthy design. 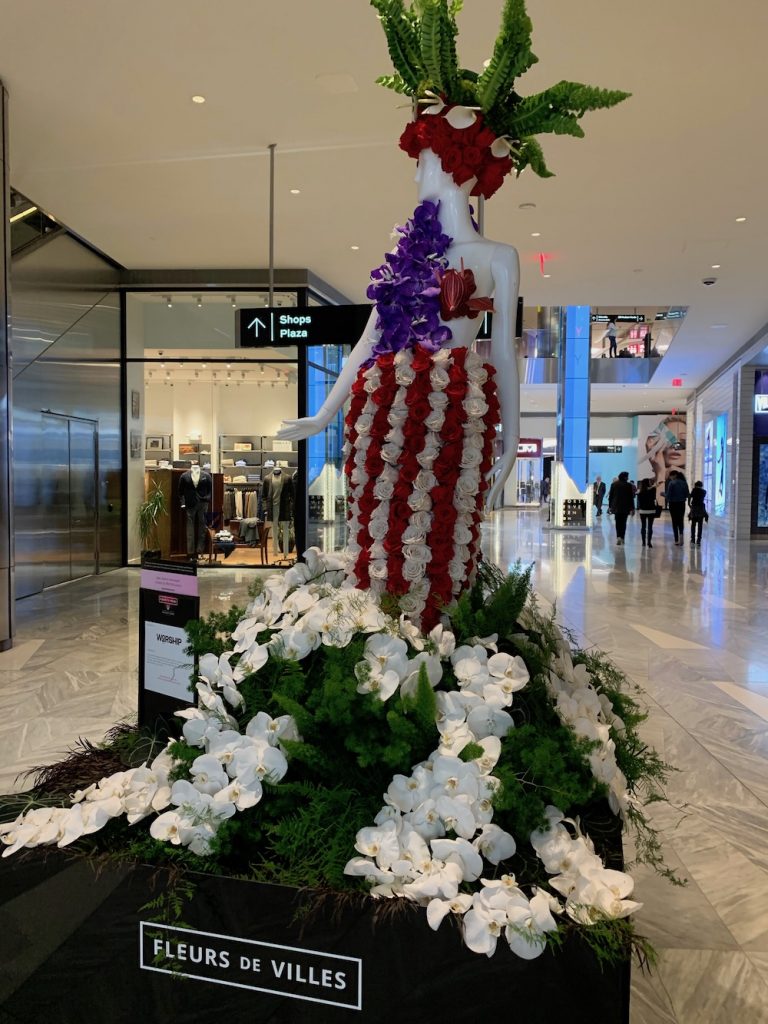 The judges also really appreciated this design by Polycarp Flowers for Fly Norwegian with exquisite detailing on the bodice. Especially the back. The mums, celosia, roses and orchids were all good choices. But the skirt could have been a bit sleeker for my tastes. However, the back detailing should win a prize on its own for being spectacular. 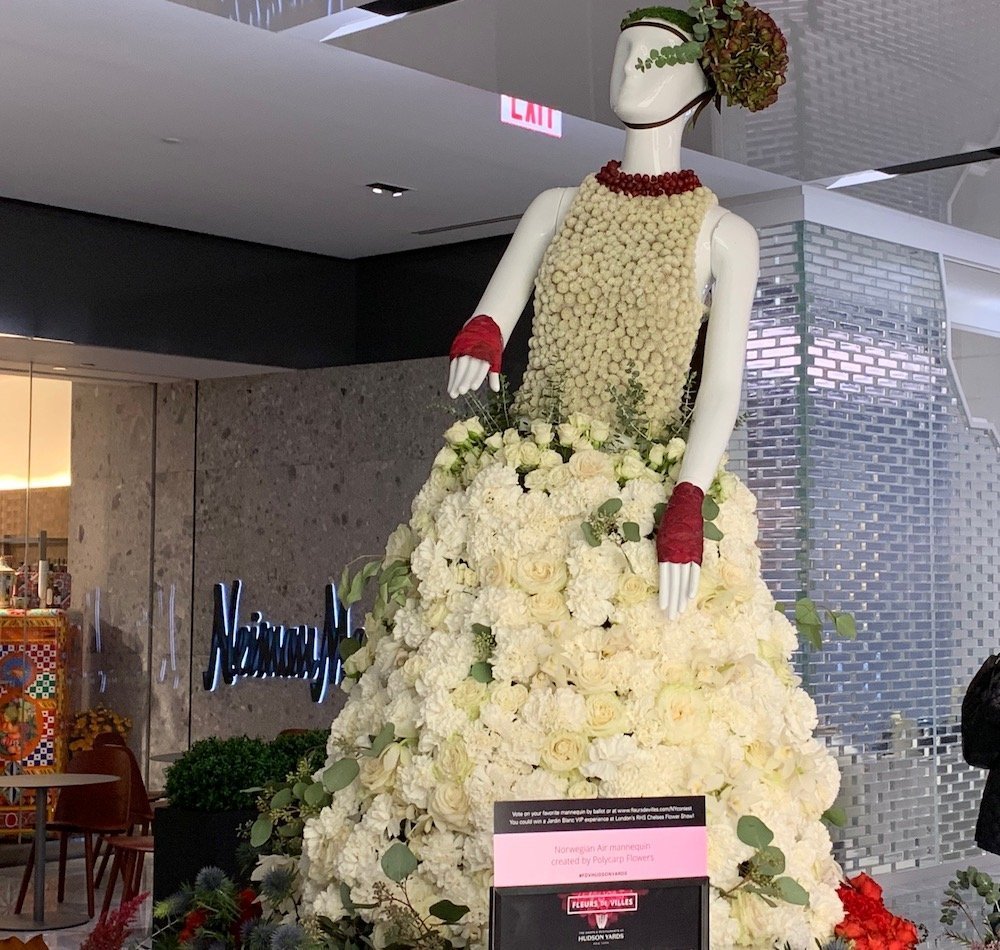 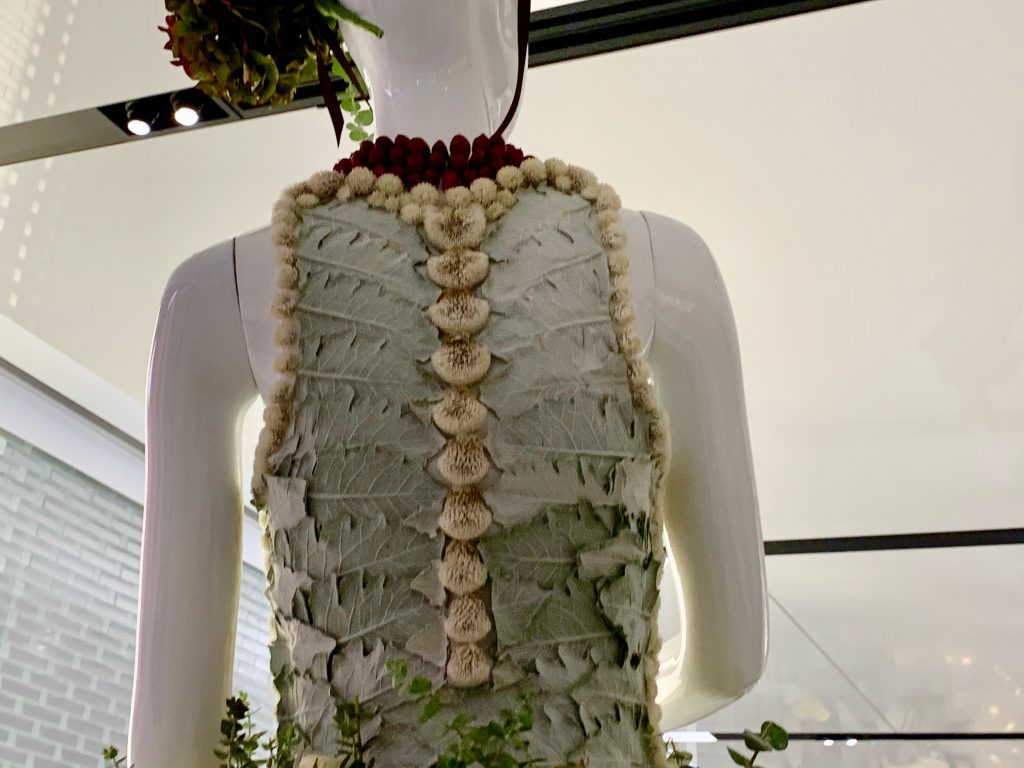 The florists’ favorite was this beautiful, autumnal, Central Park themed display. Created by the talented fleursBELLA, it hit all the right notes. “It’s inspired by a woman going to meet her lover in the park,” mused owner Bella Meyer. “She is bringing a basket with flowers and champagne.”  How could you not love this sentiment? But flowers elevate all experiences and inspire not only fantasy but joy.  Among the flowers used were a Baroness garden rose, cockscomb which was named for the red crest on a rooster’s head and a variety of orchids. 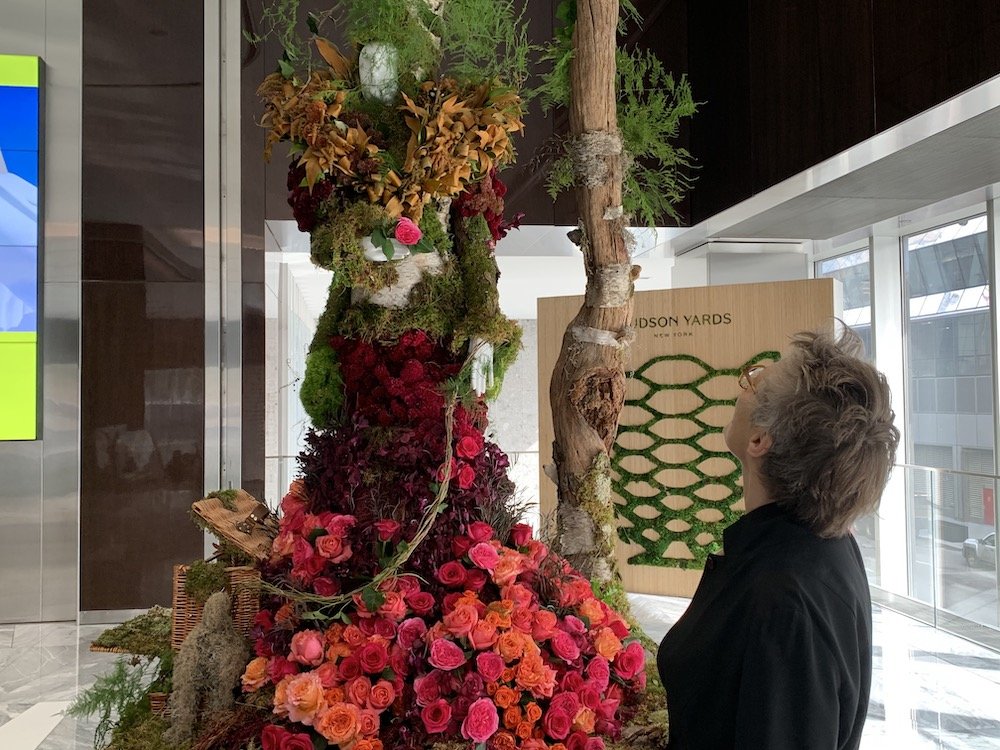 The Hudson Yards event has 14 of these displays scattered throughout the shopping area. The public is invited to judge on their own, and voting is available online as well. We will have those results this week.

Until then, enjoy this floral couture show and vote on your favorites. – Jill Brooke 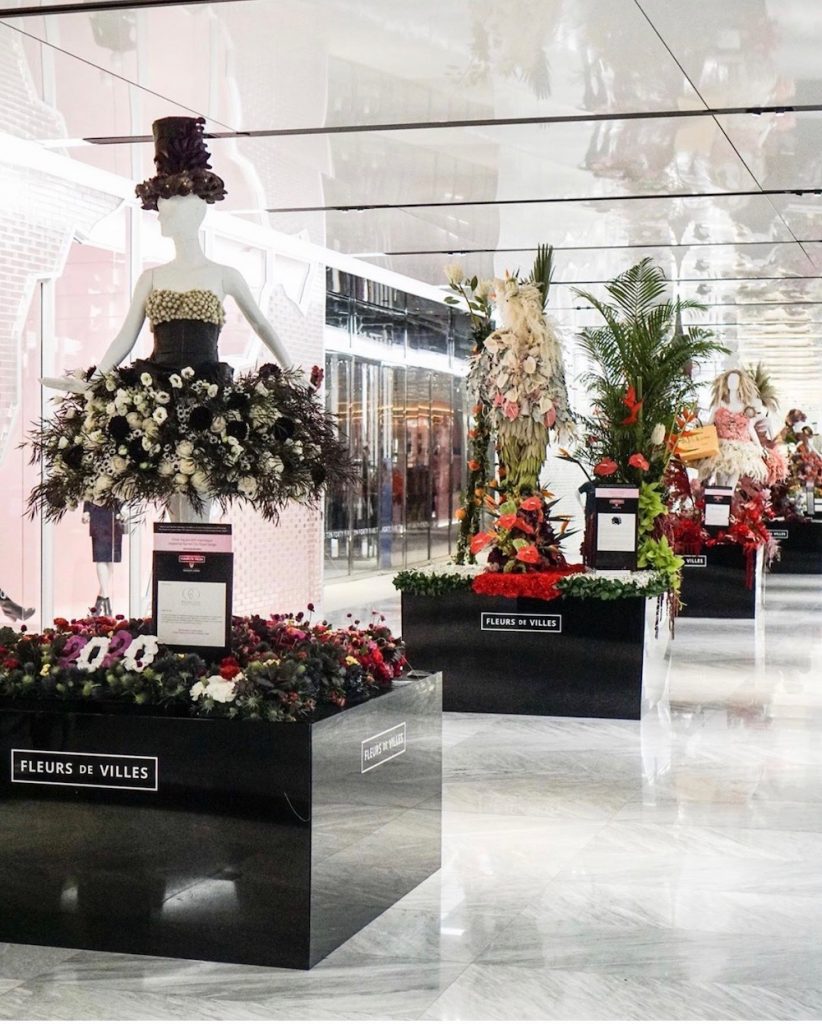