What Is The Scariest Garden in the World? 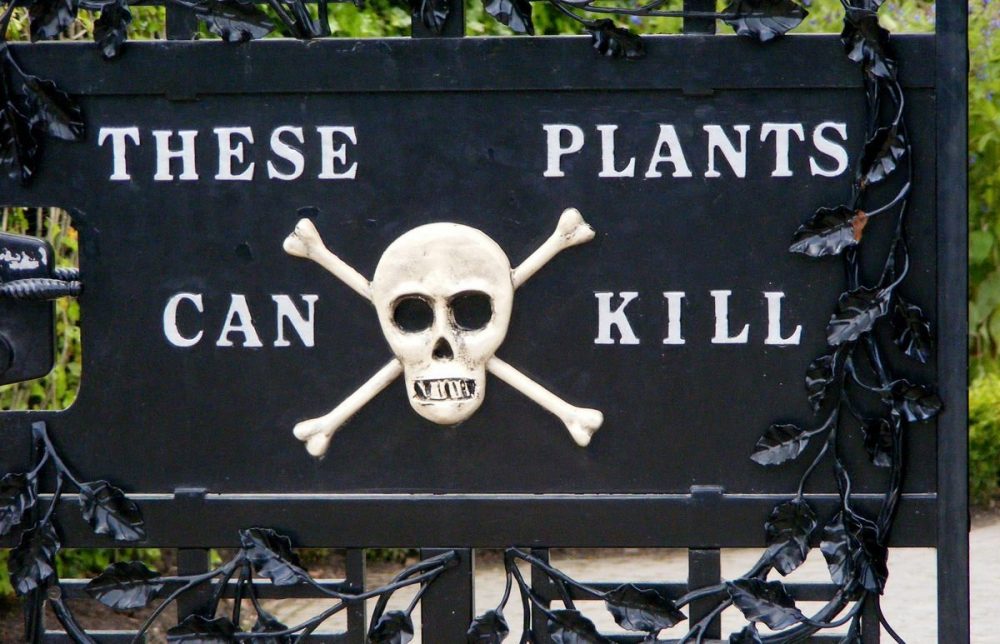 Perhaps the spookiest place to visit on Halloween is the Poison Garden in England, home to strychnine, hemlock, deadly nightshade, opium poppies and tobacco plants. Yes, tobacco can kill at high doses.

Jane Percy, the Duchess of Northumberland, started the Poison Garden at her family’s estate, Alnwick Castle, as a way to teach the lethal side of botany. And make money. (She modeled it on the Medici poison garden in Italy.) Apothecary gardens were a traditional part of English villages and castles for centuries, but they usually contained medicinal plants. The science of apothecaries being what it was, some of their concoctions were poisons too.

The Poison Garden is inside a gorgeous 14-acre formal garden, part of which was designed long ago by Capability Brown. The Poison Garden was, however, used during World War II as a Victory Garden dedicated to vegetables. The Duchess rehabilitation the entire garden and re-opened it in 2005, with this section walled off, locked and guarded at night.

Some plants are so poisonous, she had to apply for a special permit merely to bring them into the country. Those are locked inside cages. The ones that emit harmful vapors are inside glass. To the surprise of visitors one toxic plant is the common laurel. At the garden they learn not to prune laurel hedges and then load branches into the Subaru Outback to take to the recycling center. The gasses emitted from the laurel could make the driver go off the road.

Some people are so sensitive to laurel there was even a name for it up to the 1960s: hat-band dermatitis, for the laurel oil used in making men’s hats. 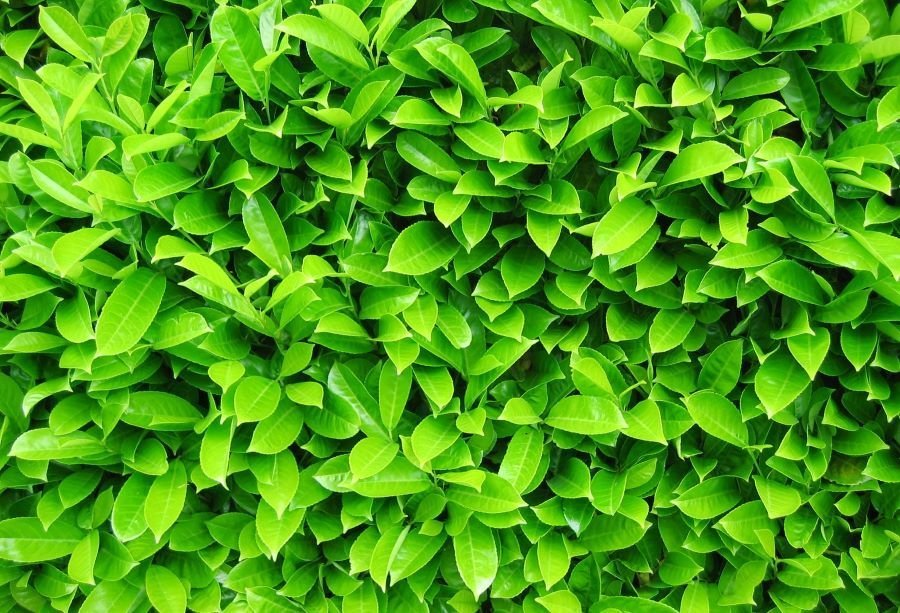 Exposure to laurel can lead to vomiting, heartburn, dermatitis, asthma and sleepiness. Several people, super-reactors, faint every year near the laurel in the garden. Perhaps it is by suggestion. Or not.

In any case, visitors are strictly warned not to touch or sniff the 100 plants on display.

Among the most poisonous plants are Atropa belladonna (deadly nightshade) and its South American cousin Brugmansia (Angle Trumpet). Since Conium maculatum (hemlock) grows in North America, it’s worth stopping for a moment to explain that it does indeed look like Queen Anne’s lace. 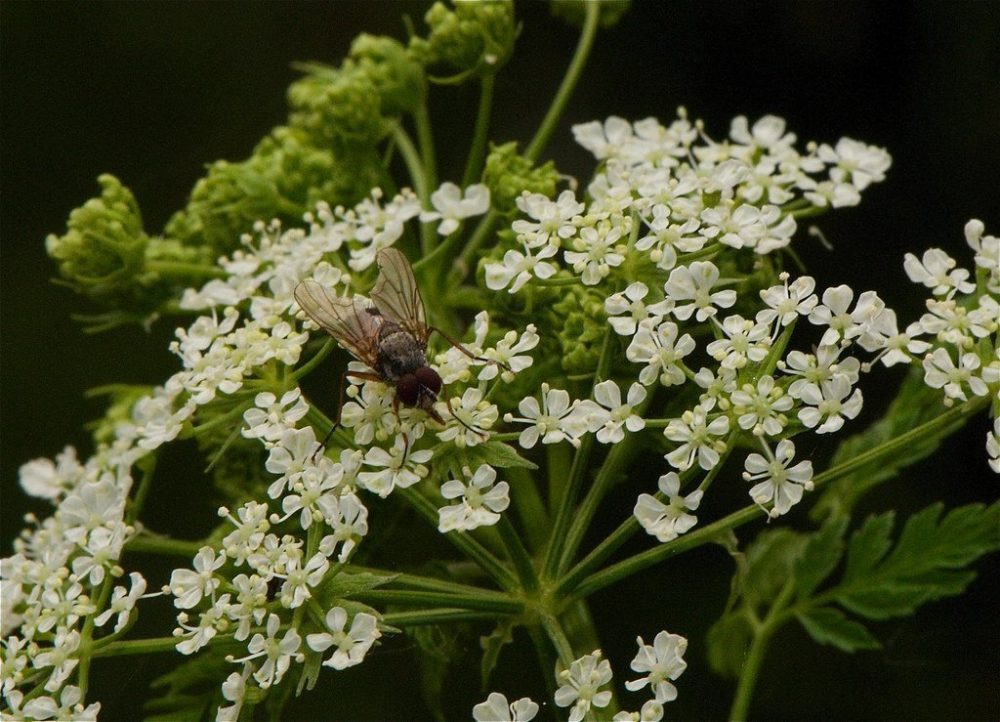 Still, if you have any doubts, steer clear. Poison hemlock (no relation to the hemlock tree) is one of the most poisonous plants on earth. Every part of it can kill. The cause of death is rapid heartbeat and respiratory collapse. There is no antidote.

Poisoning was popular in Victorian novels, the big three being strychnine, cyanide and arsenic, the first two coming from plants, while arsenic is a mineral. Note that the 1939 play “Arsenic and Old Lace” involved all three. A one-gallon batch of “homemade elderberry wine” contained a teaspoon of arsenic, a half teaspoon of strychnine and a pinch of cyanide.

Agatha Christie had a fondness for strychnine in her murder mysteries. Of all the poisons it gets points for being the most gruesome death, causing prolonged agony and convulsions. It is calculated that as few as seven bitter almonds would render enough strychnine to kill a person of average stature. Rest easy, we eat sweet almonds.

It is quite easy to get strychnine from the seeds inside the yellow-orange fruit of the strychnine tree, below, which originates in India. The seeds, which look like flat disks, have a typical bitter taste, as does strychnine. Strychnine is also being tested as a treatment for cancer. As with many poisons, what doesn’t kill you may help you. 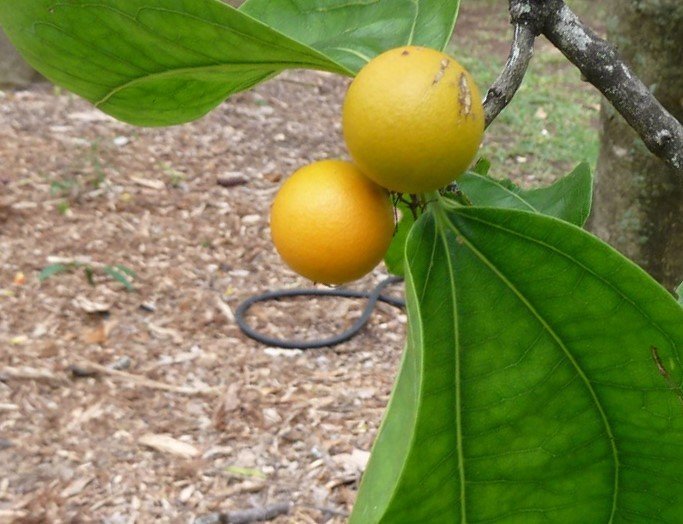 The poison garden also has plants most people would think of as benign, like magic mushrooms and tobacco. But 50 to 60 milligrams of nicotine could kill a 150-pound person. A teaspoon of liquid nicotine, the kind used in vaping, will kill a 26-pound toddler.

One doesn’t think of Halloween as being a British tradition, but Brits have gotten in on the fun. At the Alnwick Garden, Halloween celebrations include a Zombie Quest, pumpkin carving and Garden of Screams, every day through October 31. Tickets to the entire garden are around $15 with extra charges for additional events.