The Flowers Of “Downton Abbey”

You will notice that great country estates, the ones set on thousands of acres, do not have foundation plantings, the way suburban homes in America do. No beds of pansies, cheerful tulips, not even a hydrangea bush or a wall of box. Cottage gardens were for cottages, where land was scarce.

Parterres, flower beds, greenhouses and the manor house’s provision gardens, greenhouses, stables and farm animals were at increasing distance from the house. It can be assumed that Lord Crawley’s head gardener had a dedicated Rose Garden, with garden roses, including the red rose with white center known as the Tudor rose, French roses, the reliable producer known as the Eden climbing rose, enough roses to bloom from June through September. There was competition among the gentlemen classes to have new cultivars, new vegetables, new kinds of carriages, fashionable breeds of horses. By this period in England, any fashionable rose on the continent was there in an Englishman’s garden.

In the new movie “Downton Abbey,” Donal Woods, the production designer, laid on the silk roses, especially those in the salmon range of colors, notes Jill Brooke, making “Downton Abbey,” quite with it, since salmon/coral is The color of 2019. There are roses everywhere created by florist Helen Byrne.

Flowers at Downton are as much a part of life as footmen, ladies’ maids, and having someone to unzip your dress or polish your shoes. They are just there. In fact, sometimes they seem chosen by an art director to match the actress’s gloves, as in above. Those could be roses, or lisianthus, or carnations?  The leaves do not look particularly alive. But the silvery-mauve goes nicely with the deep blue that the costume designer, Anna Robbins, chose for the actress playing Lady Mary, Michelle Dockery.

Incidentally, because Lady Mary was married, she was allowed to wear a tiara to the royal dinner, and what is on her headcounts as a (very modern) tiara, loaded with diamonds.

Lady Mary seems to be ignoring the flowers beside her. But we can notice them, right from the start: When Lord Crawley announced at the breakfast table that the King and Queen were coming to visit, and Lady Mary says “What?” we get a glimpse at the table’s centerpiece, seen in close-up below: a lot of fern filler, some pale garden roses, and some curious small, flat round flowers that are deep pink and edged with white. Are they real? Or something the children made in the nursery?

At first, I thought painted daisy, but they don’t seem to have petals. Ditto strawflowers. Two-toned gerbera?

We are still looking through our flower identification books. Anyone? 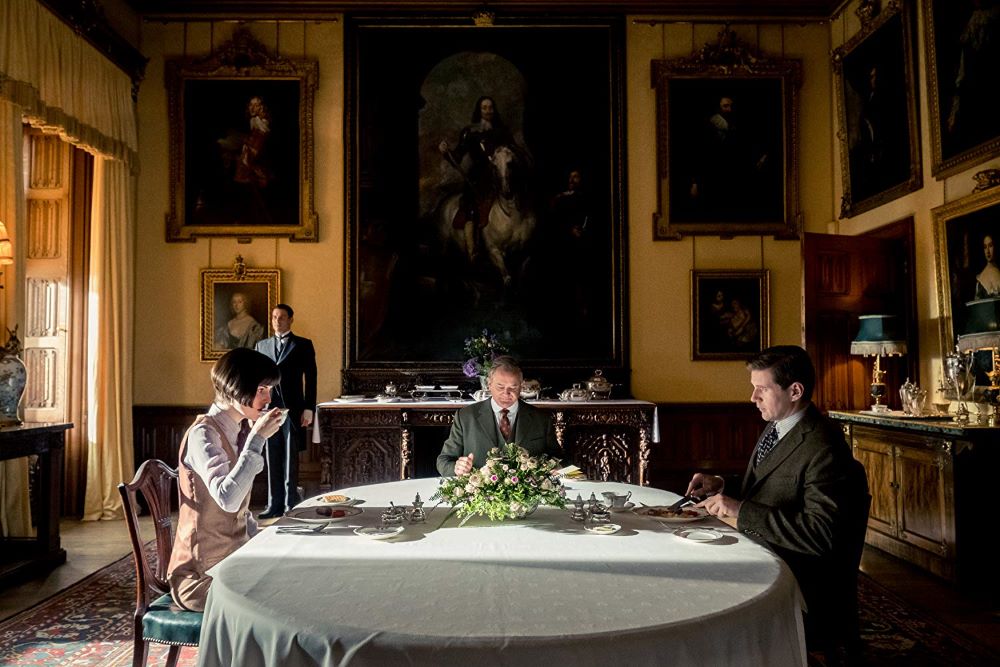 Behind Lord Crawley, on the breakfast sideboard, is a mop head hydrangea blossom and some nice delphiniums.

A new character is introduced, played by the celebrated Imelda Staunton, as a foil for the celebrated Maggie Smith. As if to indicate just how formidable an opponent she will be, the flowers in the corner of her room, right next to her maid and companion, Miss Smith, are a giant bouquet of red garden roses. We see nothing this size and color anywhere else in the film. 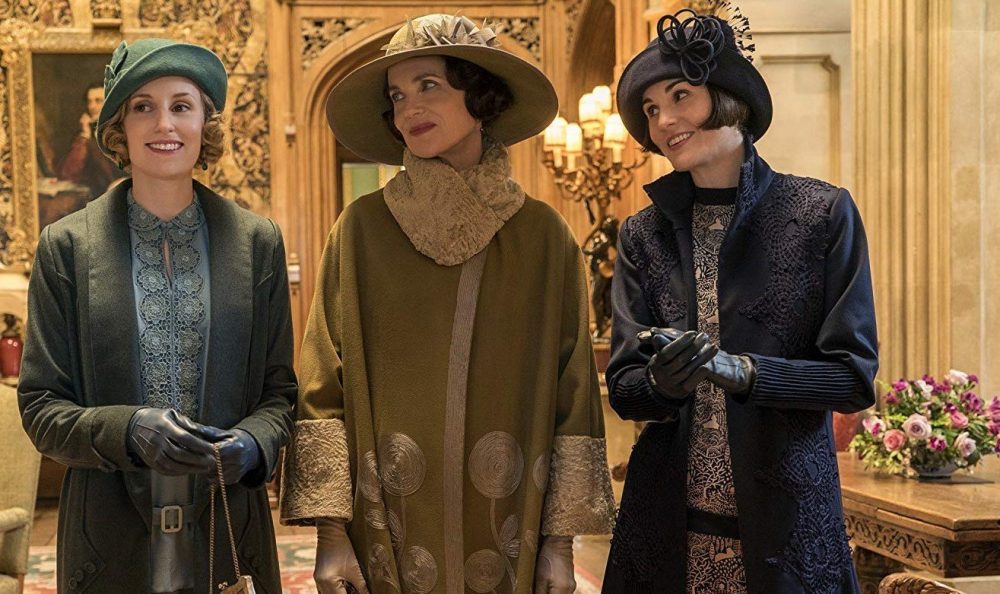 What we do see are many polite bowls filled with cream, pink, salmon and lavender or silver roses. They are found, a little droopy, on a side table when Cora and her daughters go to visit Princess Mary, who is putting up a brave front but is perhaps as downtrodden as her flowers. Pastel roses are found in the center of the table at the ball, on the last night of the film, where Maggie Smith and Imelda Staunton sit down to speak. 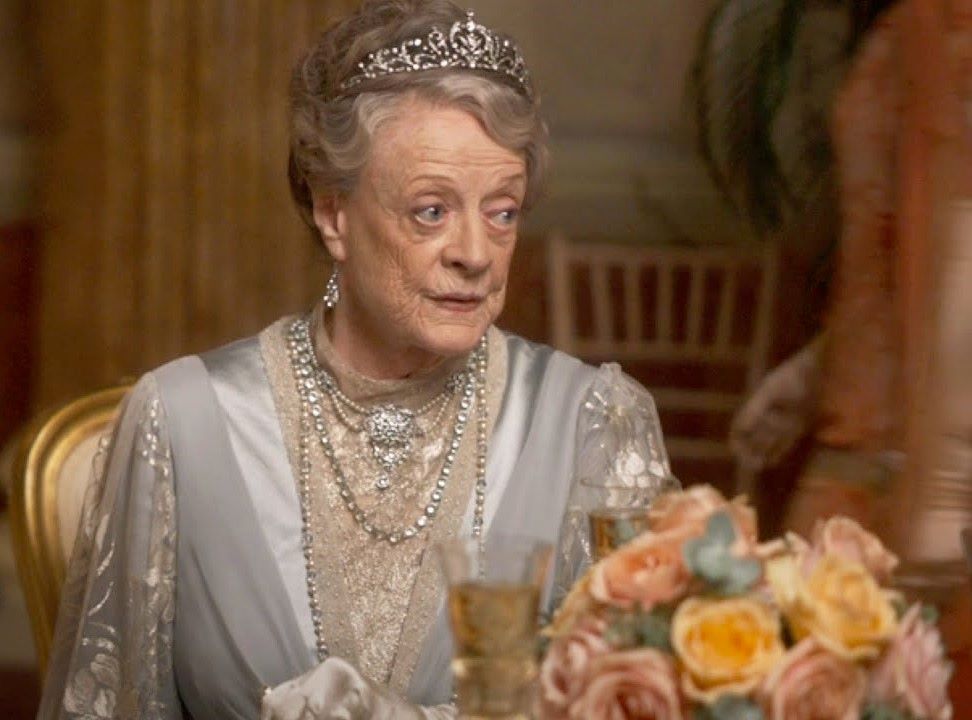 The side tables at the ball have those same polite bowls, but the major flower decorations at the ball are giant displays of bright pinkish-coral gladioli. Two vases filled with fans of glads are placed on the walls of the ballroom of Wentworth Woodhouse, a grand manor house twice the size of Buckingham Palace. It was chosen for the scene of the ball that closes the film because Highclere Castle, which plays Downton Abbey in both the television series and the movie, did not have a large enough space.

The Marble Saloon, as the vast room is called, was the place, incidentally, where Pavlova danced for King George V and Queen Mary in 1912 on their royal tour of Yorkshire, the event that inspired the plot Julian Fellowes used for the movie.

In the movie, the King and Queen also stay overnight at Downton, are there for a luncheon, a royal dinner and a parade. Much fuss is made in hauling lavender and white hydrangeas, the kinds of flowers villagers would have, to decorate the viewing stand the Queen will sit on with dignitaries for the parade, while the King, in splendid red officer’s uniform, rides at the head of the mounted soldiers.

Other flowers are seen in passing: a combination of white roses and lavender freesias, some wildflowers on bedside tables, lilies (especially lilies in bud, which look like giant pods) in a background arrangement.

The most obvious display of flowers was at the royal dinner for 18: two gigantic silver candelabra topped with five candles, interspersed with single silver candlesticks (all polished to a fare-thee-well under the supervision of Mr. Carson), with a path of red and a few white roses, red lilies and yellow orchids down the center of the table on a bed of green. 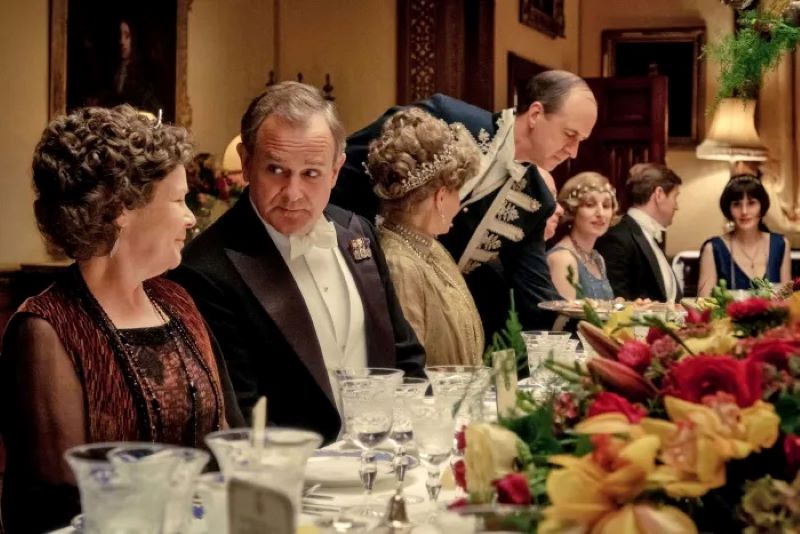 It is a startling color combination, perhaps the most startling in the film. It leads some to wonder. Was there a reason? Is there a message here? Julian Fellowes is steeped in history. What do red and yellow flowers signify?

A red lion rampant on a yellow field, or a yellow lion on a red field — those are common tropes in heraldry, from Royal Coats of Arms and banners for England, Wales, Scotland, Sweden and Holland.

And a red lion on a yellow and green field is, of course, the coat of arms for Narnia. Is Fellowes having us on, or is there a scandal right in front of the King and Queen in the form of a taunting floral centerpiece.

Linda Lee is a former editor at The New York Times. She was the deputy editor of House & Home, where she edited the garden column, and the former film editor at the Arts & Leisure section. She also wrote frequently for Sunday Styles.