The Flower Parades of the Netherlands Are a Must See 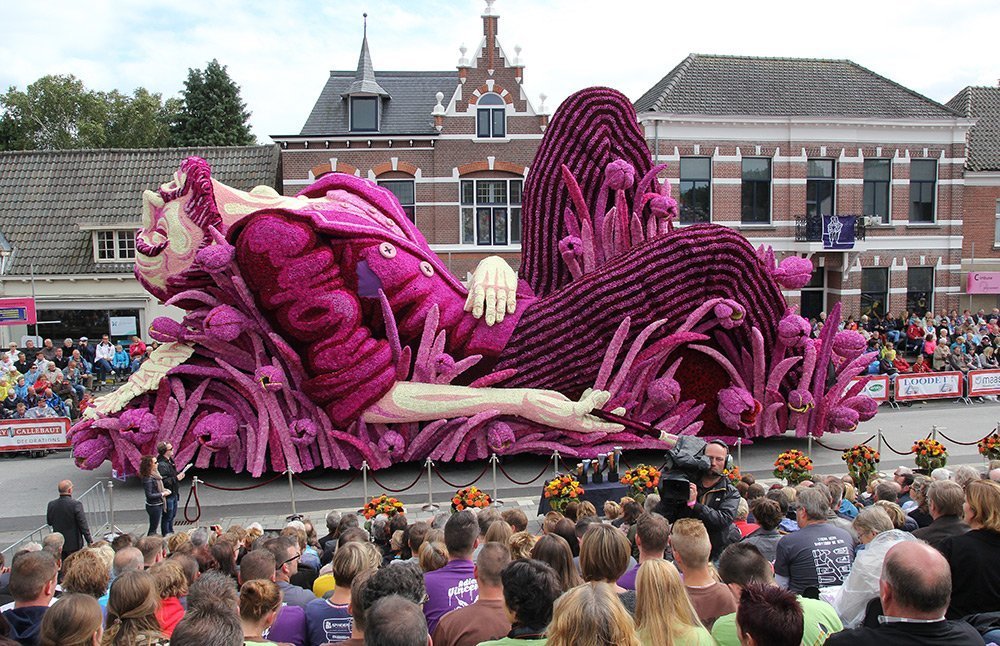 The Netherlands are to flowers as Paris is to perfume and fashion. And it is not just in springtime when the tulips are in bloom. There is a second flower season in the Netherlands, when the dahlia “bloemencorsos” (flower parades) begin, a tradition that began in the 1930s and began to draw crowds after World War II, when the country was recovering from the deprivations of the war and Nazi occupation. The season for the flower parades begins in August and culminates the first weekend in September, with the mega-parade in Zundert, then continues with more parades through September — all through dahlia’s long flowering season.

If you don’t recognize the fellow above, that’s Vincent van Gogh, favorite son of Zundert, the Netherlands. Van Gogh was born in Zundert, on the border of Belgium, close to Antwerp, the oldest son of a family of five children. His younger brother Theo, of course, was a constant fixture in his life, and his art dealer. His father was a minister in the Dutch Reform Church in Zundert. But the van Gogh family home was torn down over 100 years ago, and the van Goghs had moved out in 1871, when Vincent was 18 and already living and working as a junior clerk at an art dealer in the Hague.

There is a van Gogh huis in Zundert, but it’s not a museum. On the other hand, that does not stop Zundert from having van Gogh floats in their bloemencorsos. The one above, titled “Adieu, Vincent,” shows him lying on his back with a paintbrush in hand, surrounded by purple dahlias. It won first prize in 2015 for the municipality of Wernhout. That same year the village of Achtmaal entered a series of four floats, representing Impressionist paintings, the first of a flowering tree. One of van Gogh’s themes was almond blossoms against a blue sky. 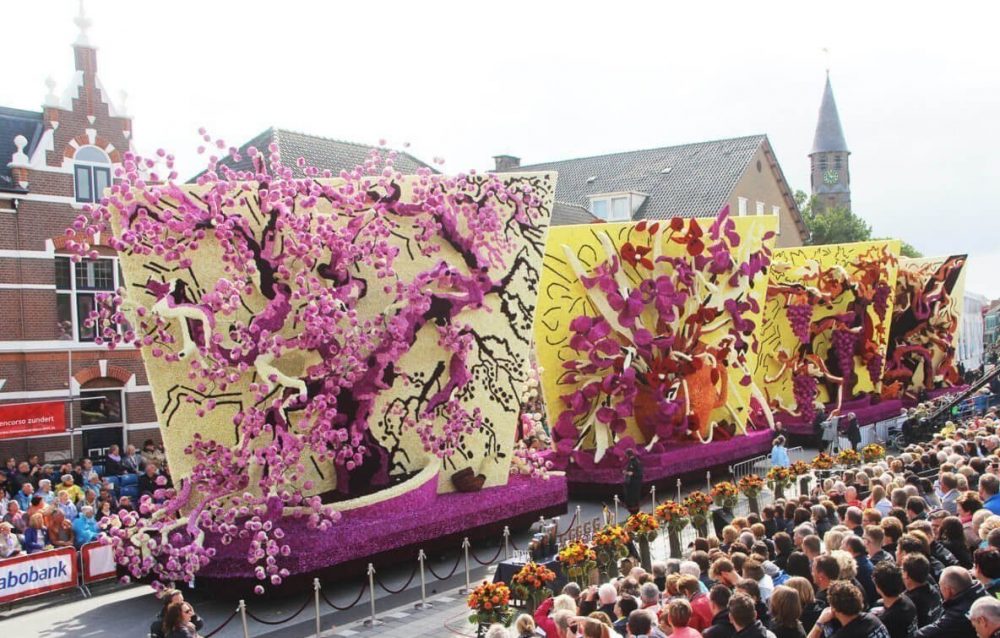 Each year 20 teams of volunteers from local municipalities in North Brabant spend months planning their floats and planting their dahlias. The colors of the plants, obviously, have to be carefully allotted. It can take thousands of flowers to make just one float, and the flowers have to be freshly picked on the Thursday night before the parade, which takes place the first Sunday in September. A note about North Brabant. It is nowhere near Amsterdam. Think Rotterdam. South Brabant is in Belgium.

Another portrait of Vincent, below, was entered in 2014 by Heikant, another village in North Brabant. One year, an enterprising town recreating van Gogh’s “Potato Eaters,” including the frame. 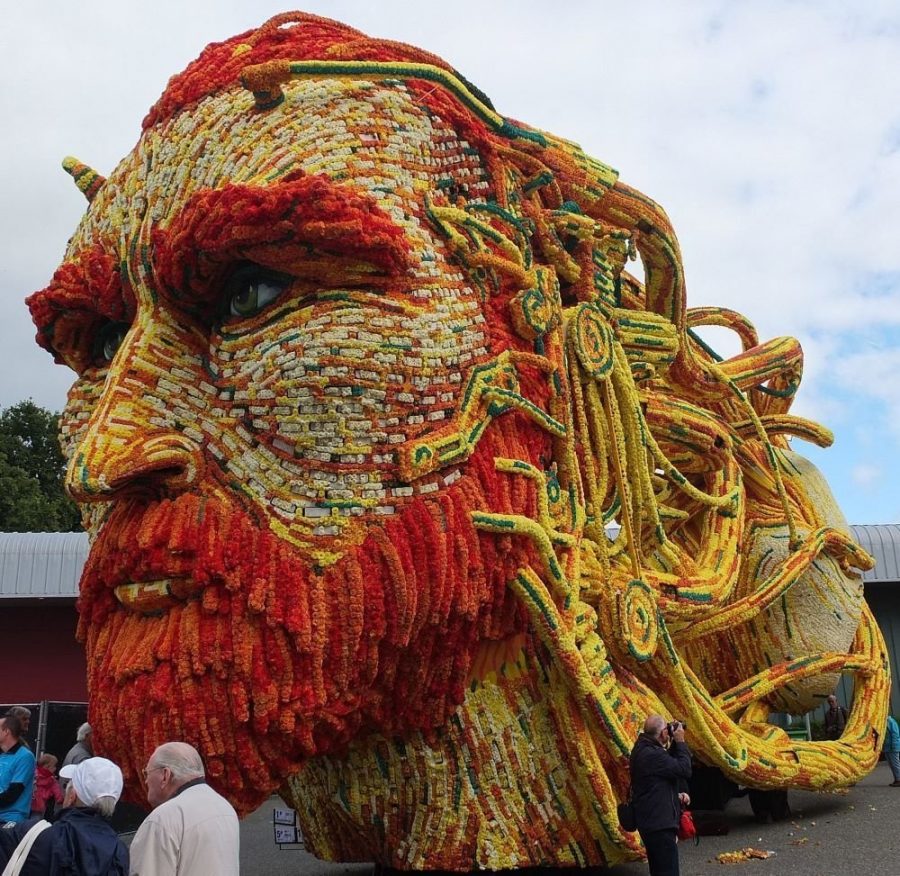 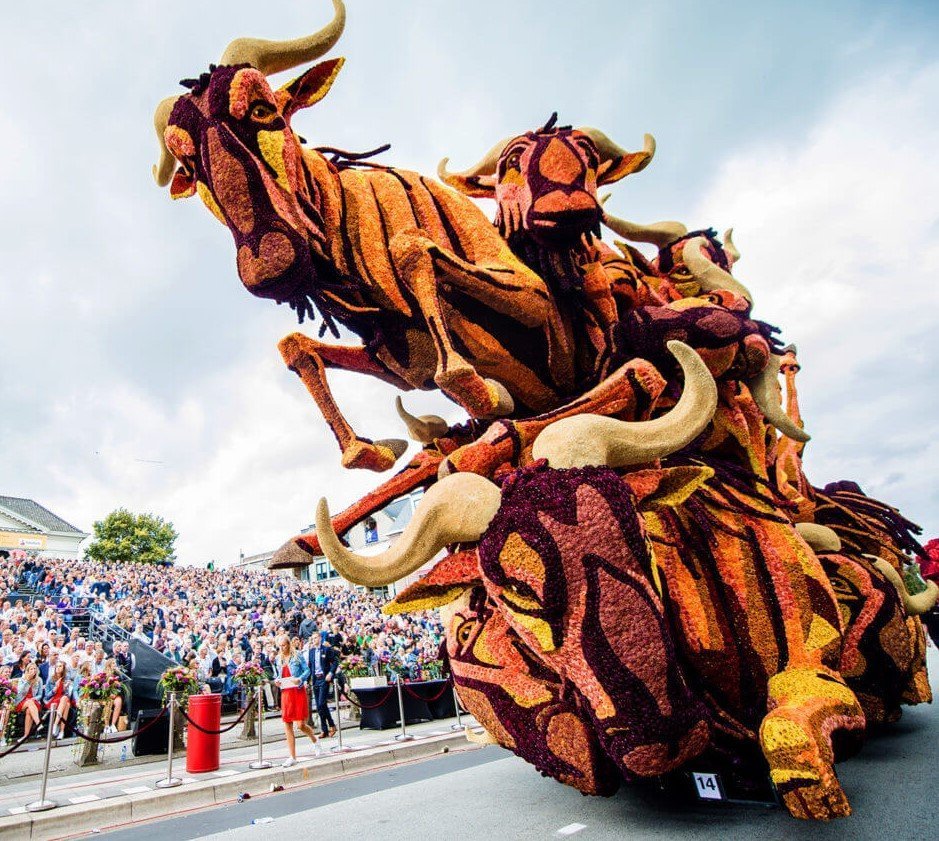 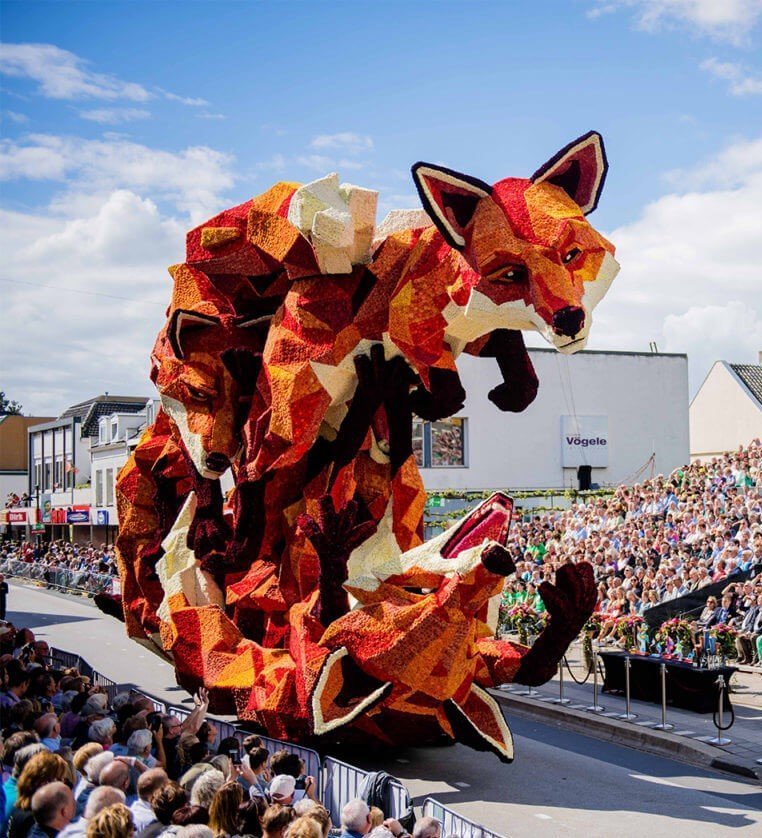 The winner in 2002 was a spectacular, huge creation: not just one tiger but a realistic-looking tiger and her three cubs. I would suspect that several competitors were ready to give up after that year. 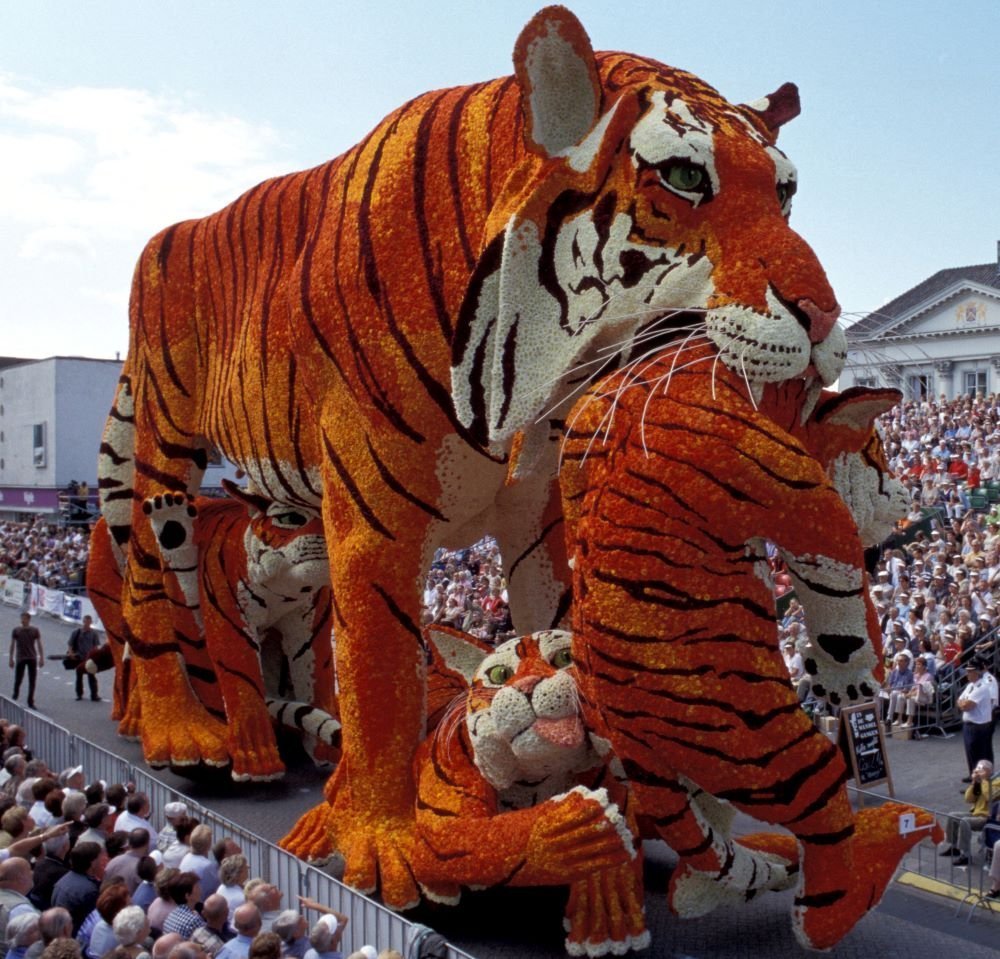 In fact, a similar-looking tiger, without the three cubs, turned up in a different corso, in Loenhout, Belgium, in 2015, stripped of some orange stripes and entered as TMS (Tiger Made of Scrap). That entry, from the town of Westhoek, Belgium, grabbed first place by one point. Loenhout’s corso takes place the weekend after Zundert’s, and if flower parades are your thing, it makes sense to hang around and see them both. The two parades are completely different and the towns sit on either side of the border. Time to explore Walloon history! By the way, the Dutch tourism office will not tell you about the Belgian flower parades, but we will, at the end of this story, as well as the one in Spain.

Thanks to an enterprising photojournalist in Loenhout, who covers the preparations for the parade, which involves not just planting the millions of dahlias but carving, modeling, welding, recruiting and organizing, I can tell you some of the “cars” or trolleys that will be in the Loenhout corso.

One will involve a number of men (real or made of flowers is not clear) pulling a giant cart with a huge, pink pig. Another float in the Loenhout parade will be the dahlia-covered version of this mock-up, including the butterflies. 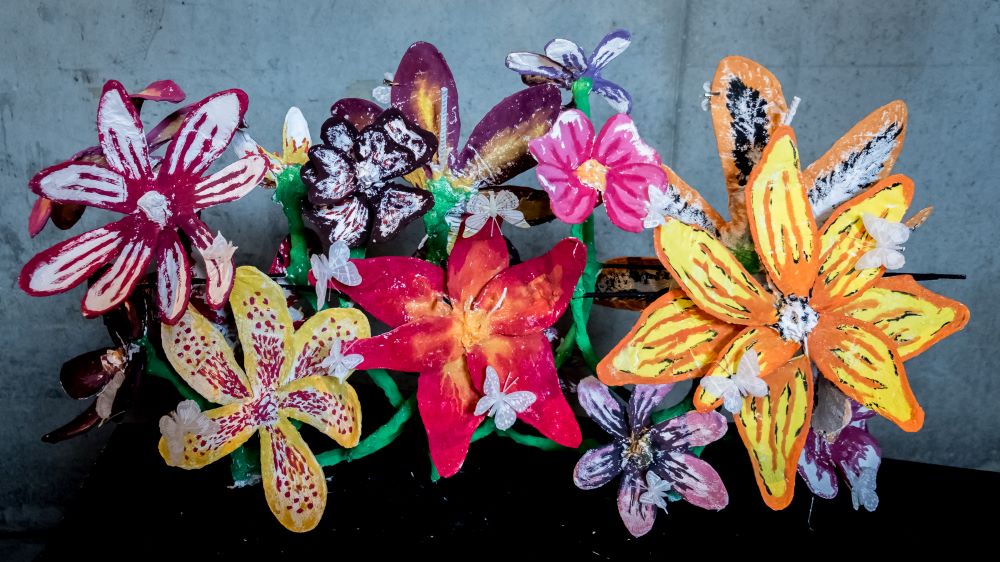 This being the Netherlands, some floats that have appeared in the Zundert flower parade, which is the largest in the Netherlands, could even be said to be X-rated. The one below seems a little steamy for Sunday-afternoon parade. Maybe parents tell young children it’s a swimming lesson. 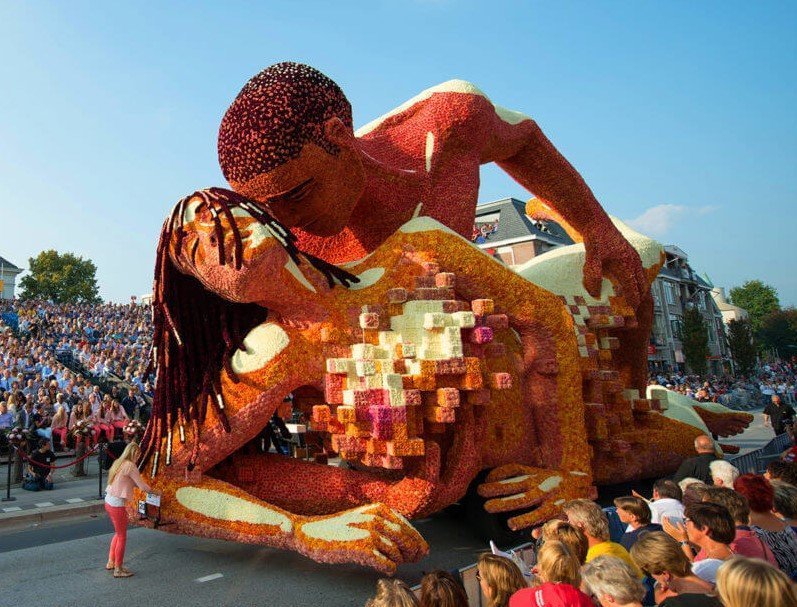 Some 50,000 people drive, fly or take a train to see the Zundert flower parade, which is echoed in the spring by what is called the “bulb parade” on April 25, 2020, an equally elaborate parade decorated with tulip petals and petals from other spring flowers. That ends at the Keukenhof Gardens, where the tulips, daffodils and hyacinths are already putting on their show.

And as indicated Zundert is just one of many August and September flower parades. Some are small-town affairs, like county fairs. Most of them have marching bands. I’ve seen one with a band that plays while riding bicycles. There are clowns, jugglers, balloons. And some approach Zundert levels of production. 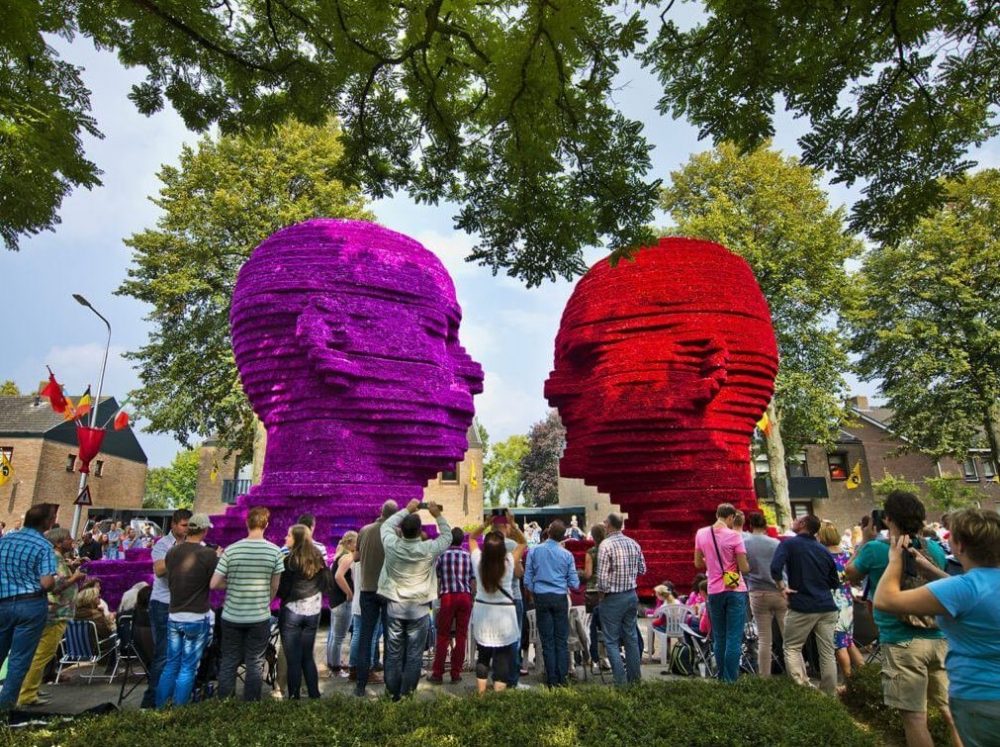 Rendering people with dahlias is obviously a tall order. This artistic rendering of two giant heads certainly beats anything seen in the Rose Bowl parade. Is it that the Dutch are more creative and artistic? That dahlias are easier to work with? That the whole focus is the parade, and not a football game afterward, or celebrities riding on boring floats? Whatever the reason, here are a dozen reasons to visit the Netherlands in late summer.

August 2 – 4 Varend Corso Westland – Varend is a casual parade of boats festooned with flowers that travels on canals through four cities, including Delft and the Hague

August 30 Laredo (ES) – Laredo is included in the list, but is in Spain; most events like this in the Mediterranean are referred to as “flower battles”

September 1  Zundert (NL) – Zundert was the first, and most would say the best. It is the biggest. Tickets should be bought in advance. Hotels in town are booked far ahead of the parade.

September 8 Loenhout (B) – Close to Zundert, a nice second helping of flower parade floats, if you are in the mood. In Belgium.

September 15 Kindercorso Zundert (NL) – Thousands of children participate in decorating wagons and carts with flowers. It is the junior version of Zundert.

September 20 – 21 Drogeham (NL) – Unlike all the other parades, the Drogeham parade takes place at night, with floats lighted from within.