When half of your audience is in the Hamptons or Provence, and another goodly number refuse to leave their air-conditioned homes and offices, perhaps it makes sense to sell minor oil paintings, works on paper and pieces of sculpture online. The names for Sotheby’s sale — which ended at noon on July 24 — are first-class and there is plenty of appetite for some works, especially a Renoir charcoal and oil paintings of flowers. [UPDATED after the end of the sale] 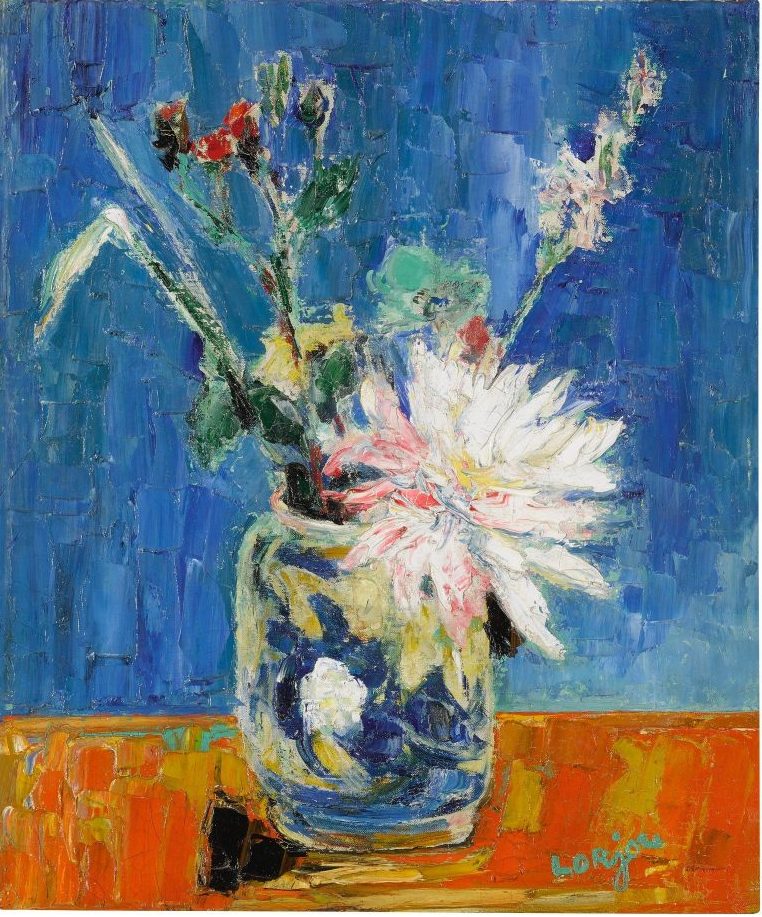 There were 23 bids the day before the auction on Bernard Lorjou’s “Fleur Blanche au Fond Bleu” (White Flower in Blue Vase), an oil painting with a conservative estimate of $1,500 to $2,500. Bidding had reached a not unreasonable $3,200 for a very pretty painting, circa 1956-57, by a French artist who called himself an anti-abstract painter. The winning bid was $4,750.

For a work on paper!

In an online auction, mind you. Since the price was so stunning I’m showing it to you. It’s simple. It’s nice. But at that price? 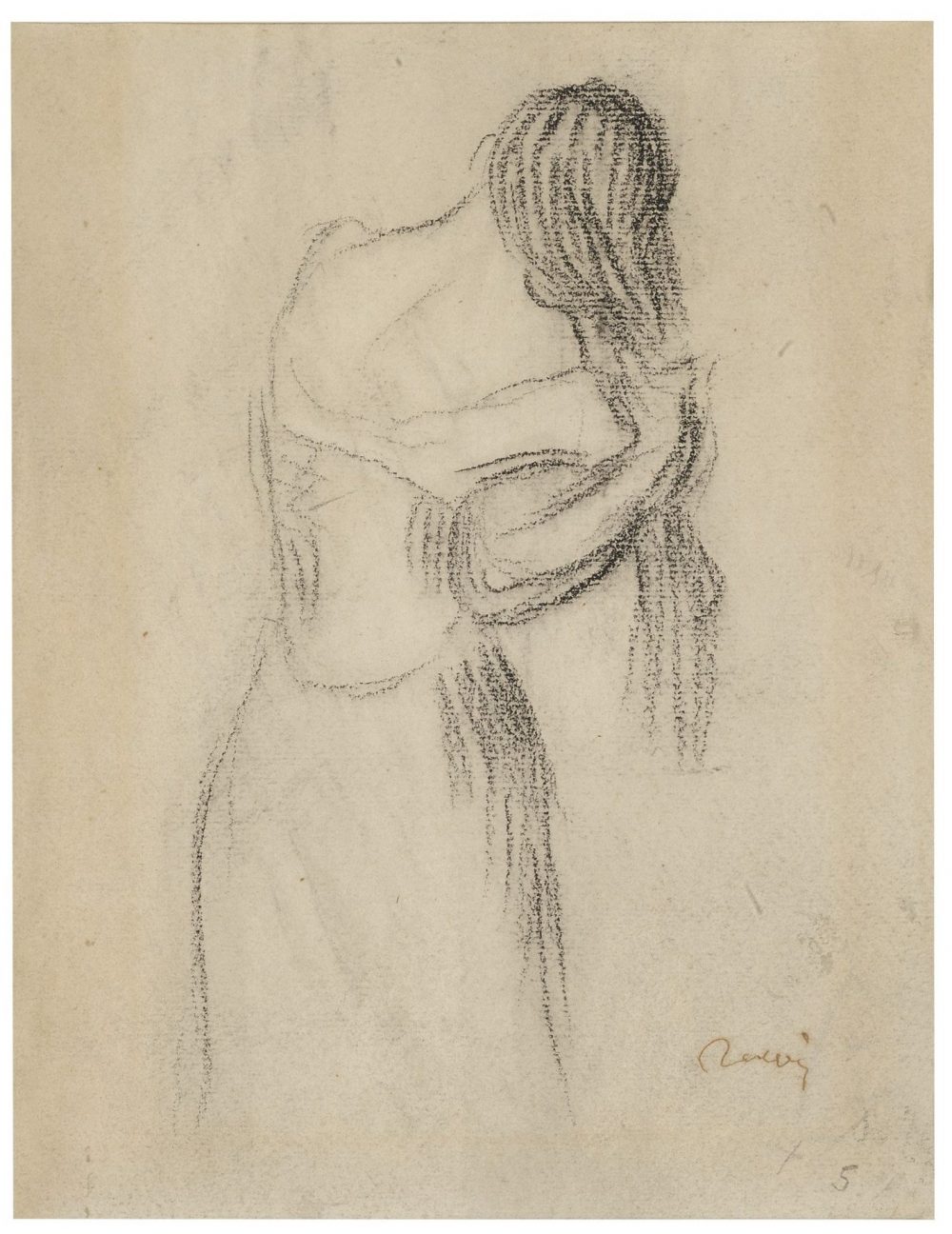 But back to flowers in vases: 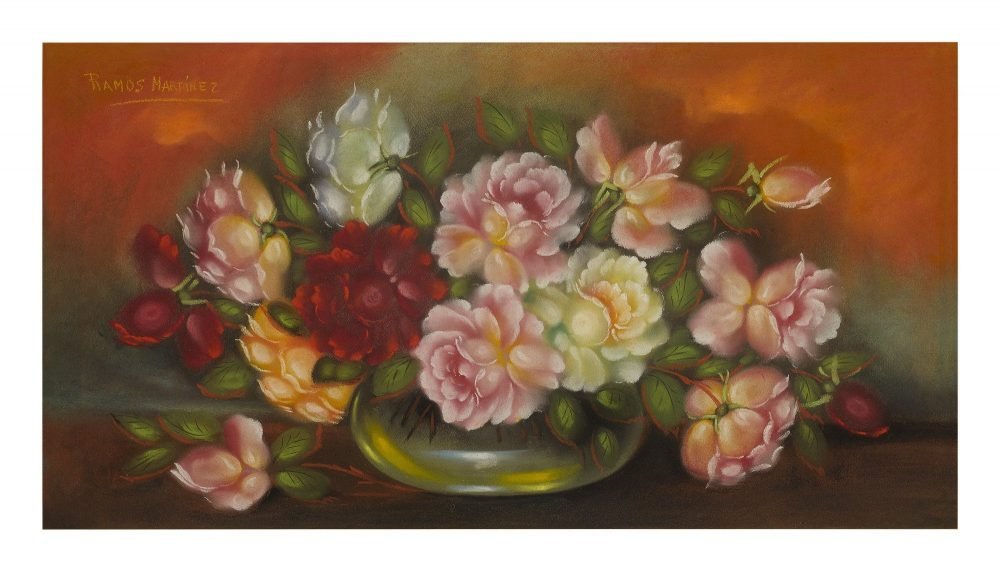 This stylized pastel on paper, called “Roses,” is by the Mexican artist Alfredo Ramos Martinez, from around 1922. To me the flowers are reminiscent of the roses on Chinese dinner plates and vases, lush, idealized, hyper-realistic, exaggerated. This pastel, which was bought from a private collection in Buenos Aires, is markedly different from Martinez’s depictions of peasants, workers, even local flowers. He lived for some time in Paris and also in California. As of a day before the end of the online auction it had elicited two bids, of up to $2,800 against an estimate of $4,000 to $6,000. The final price: $3,750. 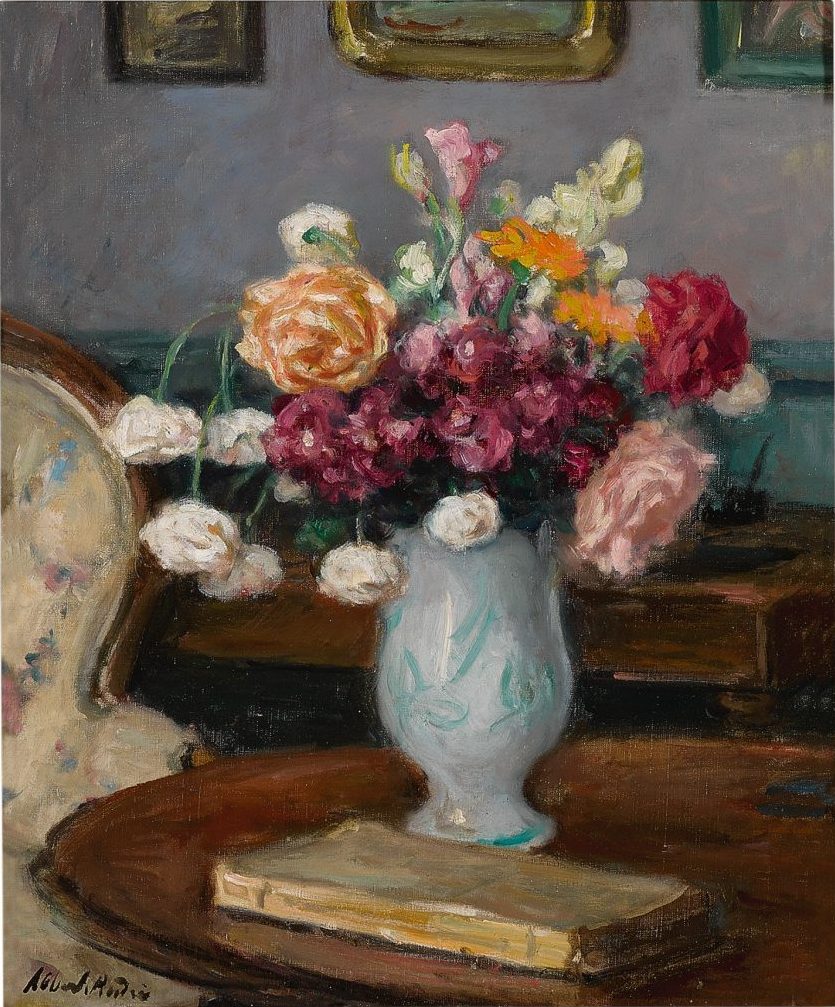 Albert André was a post-Impressionist with a friendship with Monet and August Renoir; a friendship with the latter ushered him into dealers and galleries and early recognition for his figurative work. One of Les Nabis along with Signac, who is also in this auction at Sotheby’s, André is widely recognized as a painter, especially of interiors, portraits and flowers.

There are 12 bids for the above vase of flowers, at $4,500 a day before the end of the sale; the final bid was $11.875. But admirers of André’s work might be advised to head to the Guarisco Gallery  in Washington where his “The Bouquet (View from the Artist’s Studio, Paris)” 1900 is for sale, below. I think it’s superior. 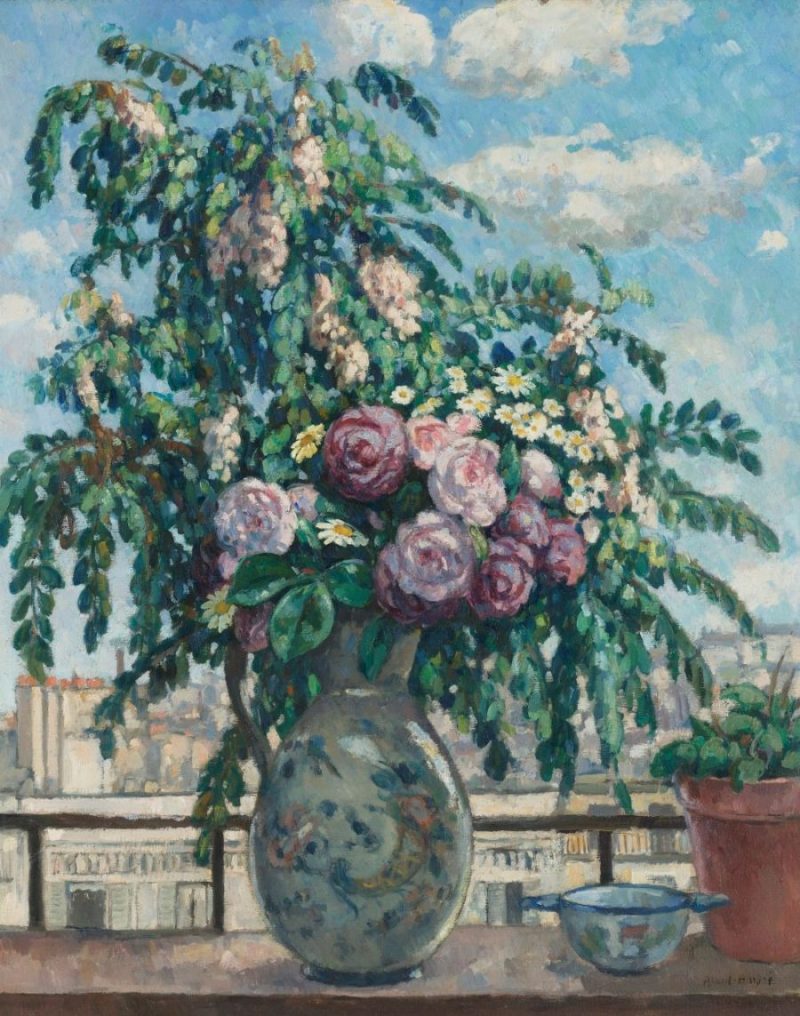 Back to two more items from the Sotheby’s sale: 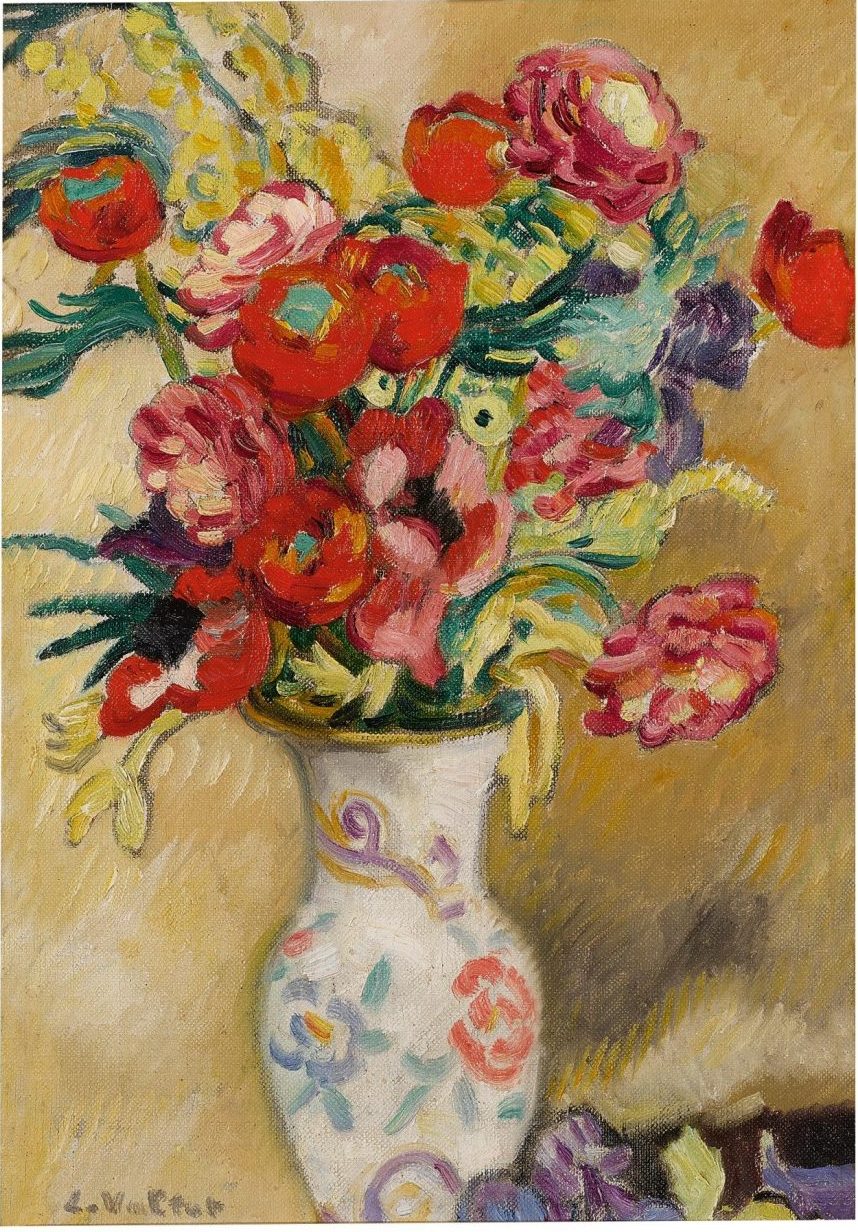 Lot 4, above, by Louis Valtat, is “BOUQUET AU VASE DE FAÏENCE.” Poor Lot 4. Estimates are $40,000 to $60,000 and there were no bids 12 hours before the end of the sale. Louis Valtat was considered a Fauvist, and Fauvism has never been a big hit. Let’s face it, after Matisse, maybe Braque (name one painting by Derain) things drop off rather sharply.

But apparently the Valtat fanciers were hiding in the weeds, waiting for bidding to start, and when it did prices went up quickly. The closing bid was $43,750, toward the bottom of the estimate. I think the problem with the bouquet above is that it just isn’t very pretty. The Ralph Gierhards Gallery in Dusseldorf has this gorgeous Valtat flower painting for sale. 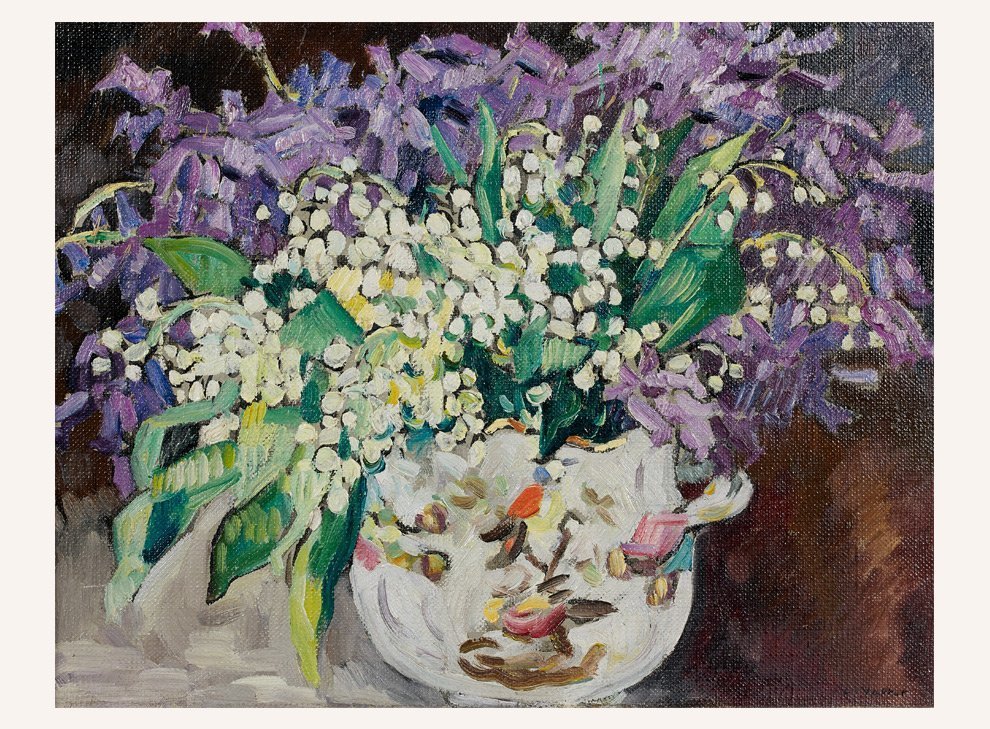 If you want a Valtat, fly to Dusseldorf – yes, they are having a heat wave, and no, as a rule, they don’t have air conditioning in Dusseldorf – and look at this one in person. It is lily of the valley and hyacinths from 1925. Even the vase it prettier. Better flowers, better vase. No Fauvism.

And finally, an inside hint for the Sotheby’s auction: Suzanne Eisendieck, the post-Impressionist painter’s “PETITE FILLE D’HONNEUR.” or “Little Girl of Honor.” If you put this painting at the end of a hallway, and never let guests get too close, they might think it was by a major Impressionist, probably Renoir. It is Renoir-ish, although it is also cartoon-ish. 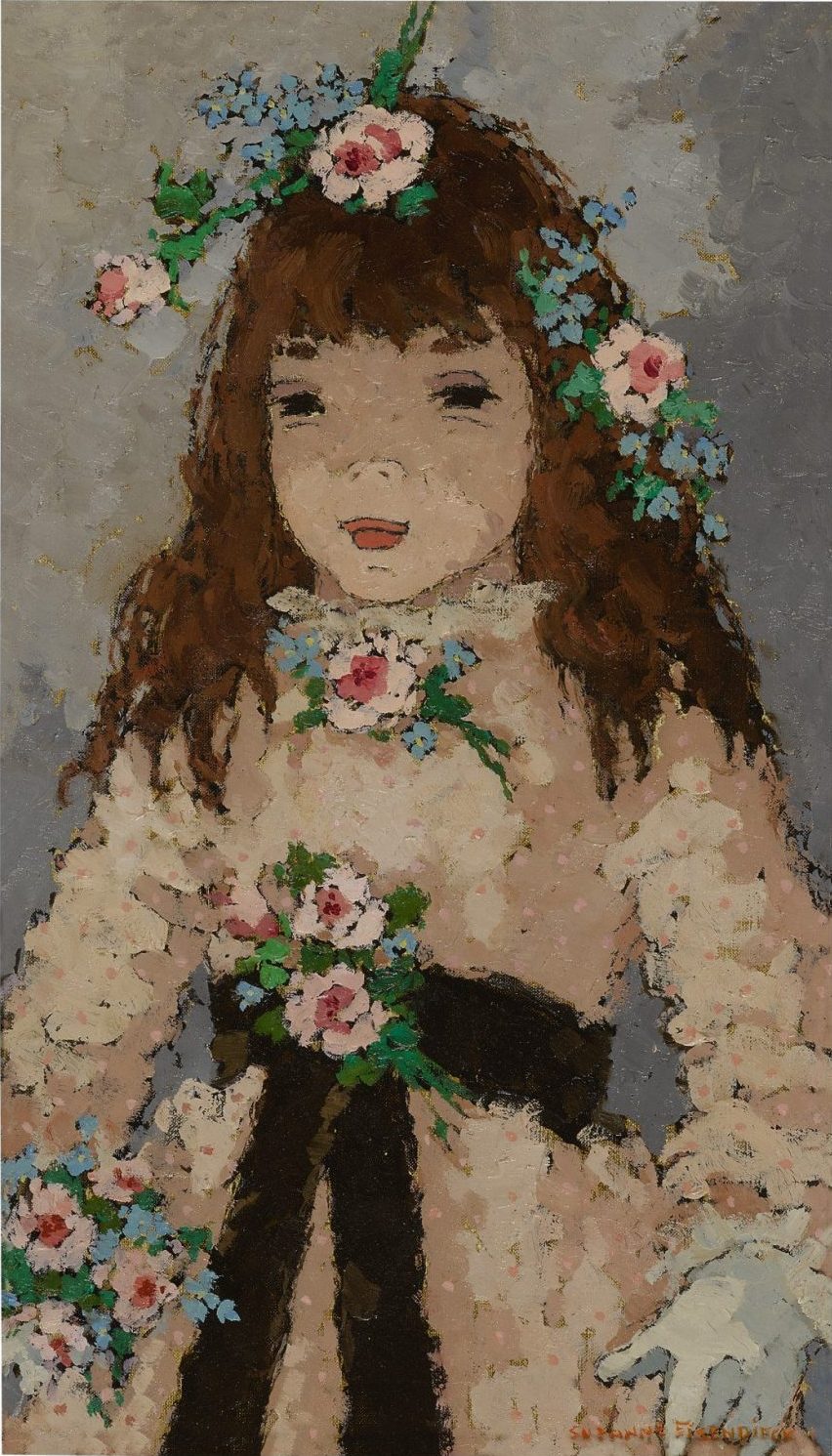 Eisendieck, born in 1908, was a German Post-Impressionist painter with a prodigious output. She was obviously under the influence of Renoir, Manet, Monet, Degas (check out the black bands around the throats of the young women she painted, the pert hats they wear, the striped shirt dresses, the scenes along the Seine, the Paris streets…)

So “French Impressionist” were her Post-Impressionist paintings that, once she arrived in Paris, her salad days were brief. She sold not just there but in the United States. She married Dietz Edzard, another Post-Impressionist, and it is said that their paintings were so similar some galleries couldn’t tell them apart. Below, first, a Suzanne Eisendieck called “Au Bois du Boulogne,” second, a Dietz Edzard, sold recently in Connecticut, called “Young Woman at the Racetrack.” 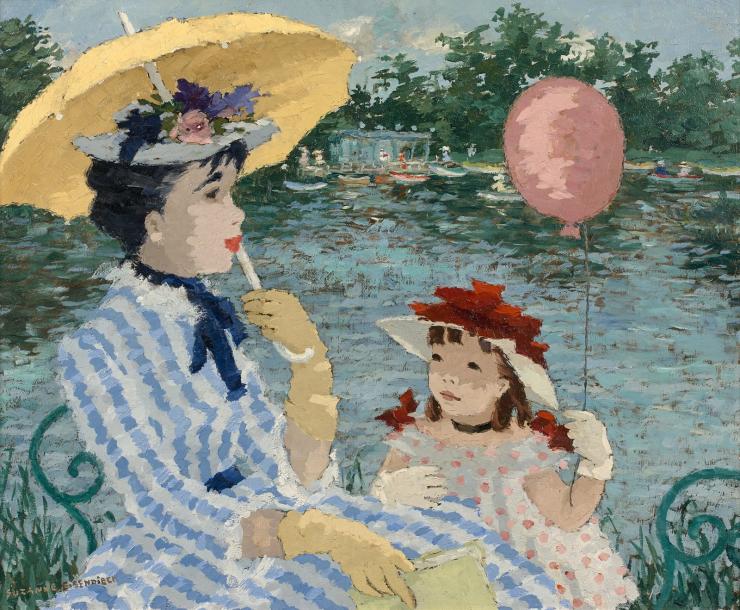 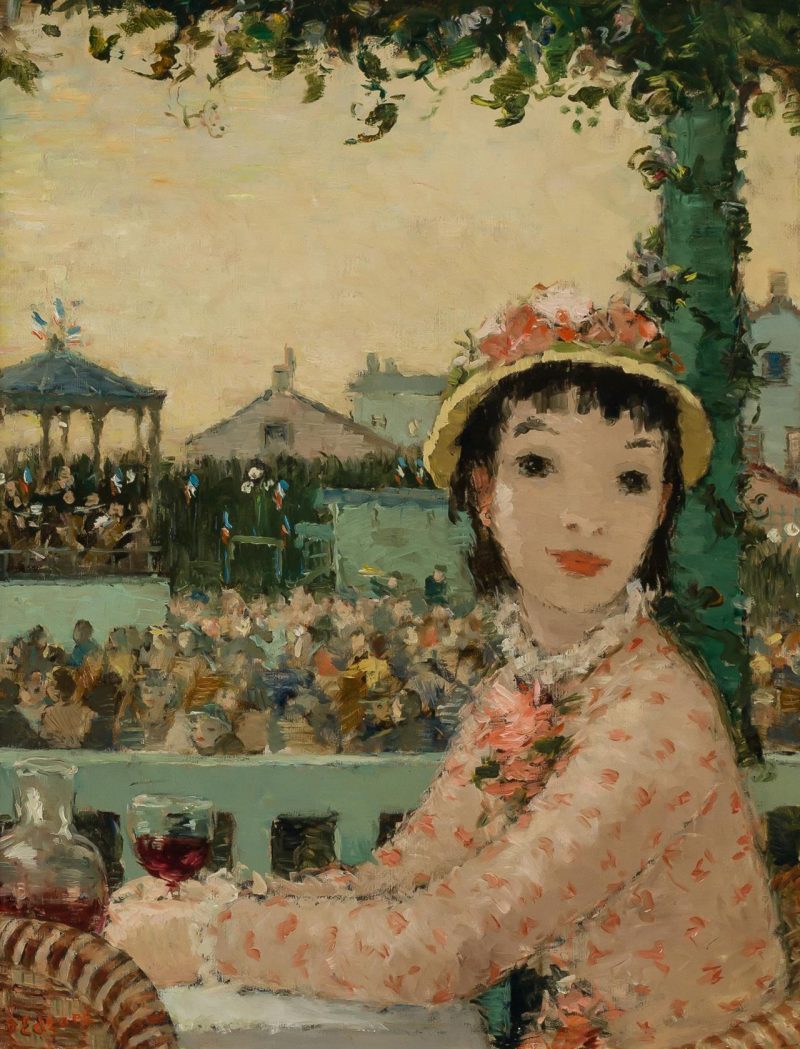 After the war they had two daughters. Owning an Eisendieck painting allows you to enjoy hearing about the lives of their amazing daughters. Christine Edzard became a film writer, art director, costume designer and short-film director who started a production studio near London with her husband, Richard B. Goodwin.

If her achievements, which include an Oscar nomination for adapting “Little Dorrit,” do not seem enough, the Edzard’s younger daughter, Angelika went on to a career in political science. She speaks five languages, married Georges Karolyi, the Hungarian Ambassador to France, and is the director of the Joseph Karolyi Institute in Budapest, Hungary. She and her husband have four children, which she managed to do between writing freelance articles on German and French national defense, political science and international affairs.

And if not this Eisendieck, take your pick. She did at least 600 and her husband did almost as many. They come up for sale all the time, and you can talk to your guests about their lives in Paris, their creative daughters, and what you see in these paintings of all the Impressionists you love.

When you buy something beautiful, it only increases in value. – Linda Lee