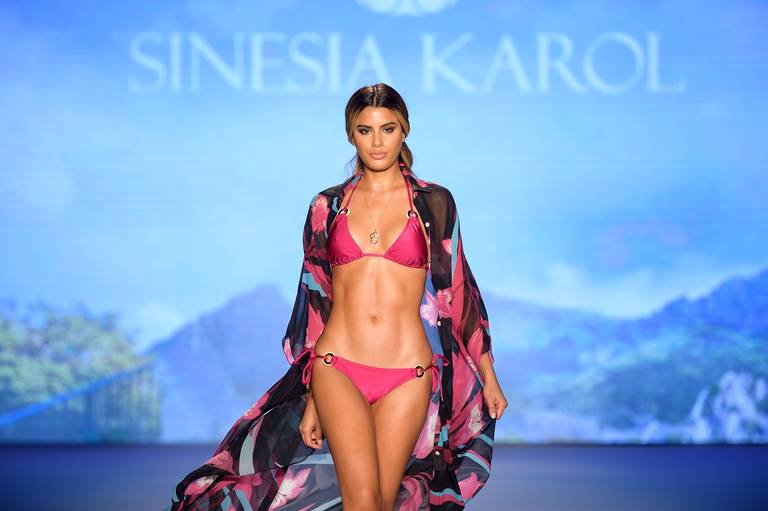 It was probably the veteran publicist Charlie Cinnamon who came up with the idea, one of those concepts that is lost to the annals of PR history. What could make people come to Miami in July?

Why a fashion show of swimsuits. What could be more obvious?

Miami already attracted people who lived inland, who swarmed to the beaches in hope of a sea breeze, but something less than a hurricane. Still, they were not the rich tourists that kept Miami Beach nightclubs humming. They did nothing to fill the fancy hotels. But Swim Week! With models and photographers. Perhaps even people from the fashion press!

Originally the joke was that local models required two different size swim suits. Say a size 6 on the bikini bottom, and a size 14 on top, since all of them had had breast enhancement surgery.

But Miami Swim Week has matured. Actual name models fly in for the shows. It is covered as a serious fashion week.

And these days Sports Illustrated took over the W hotel for open calls for women of all sizes, ages and ethnicities to walk the runway. (Note, MJ Day, Sports Illustrated’s swimsuit issue editor, and the mind behind this fashion show, decided that no one would wear high-heels, thus anyone could walk the runway.) There were meaty haunches. There was gray hair. There were women who didn’t walk like models. But out they came.

It was a joyous runway show, a celebration of women’s spirit, and sometimes what it takes to wear a bathing suit in public. 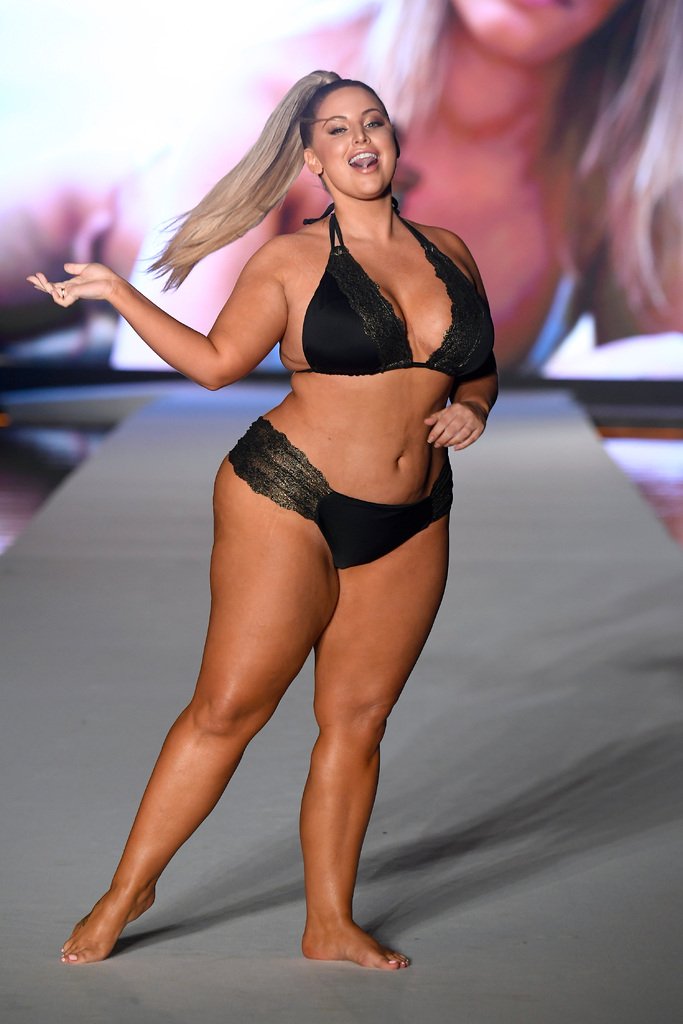 Coming to the casting call were beautiful women like Ashley Alexiss, above, who probably wears a size 14 or 16. That is an average size woman in America but she would not under normal standards be considered a swimsuit model. She not only enjoyed herself on the runway, she even stopped to give her ponytail a spin.

The models were in a frisky mood, not the least because they were barefoot and didn’t have to worry about turning an ankle.

Halima Aden, below, who starred in the 2019 SI swimsuit issue wearing a burka swimsuit (Muslim women not only swim, they compete in the Olympics), walked in Miami in a head-to-toe burka by Cynthia Rowley with a floral motif. Consider this – it’s the ultimate protection from skin cancer, as long as SPF 30 goes on the face. 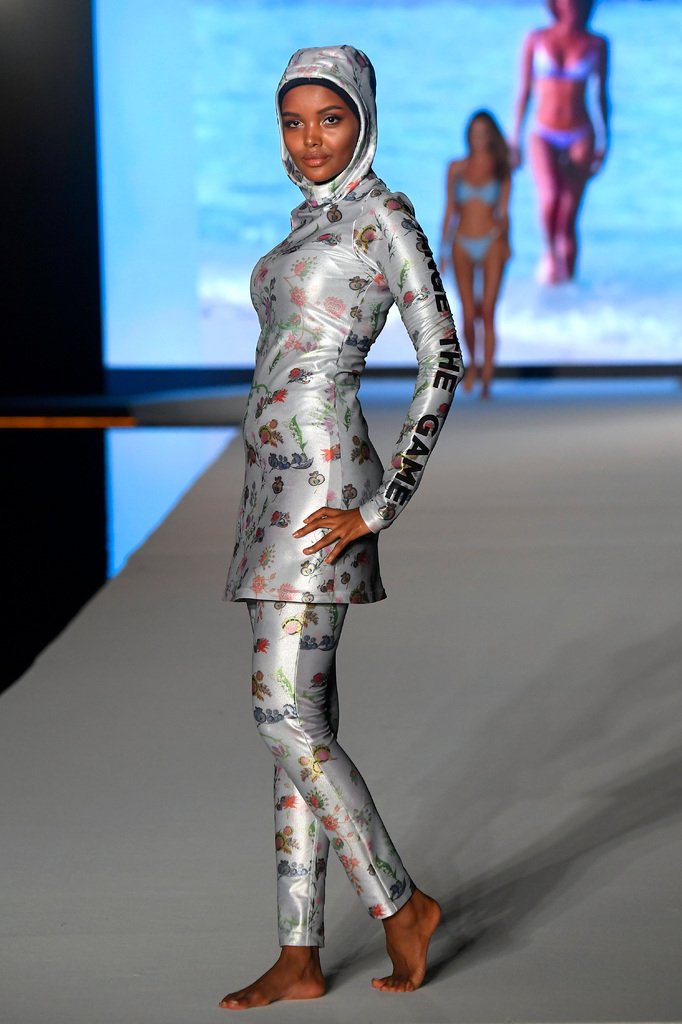 There were other surprises. One model, Djaniel Carter, who came to the open call walking with a cane, did the runway in a wheelchair, pushed by MJ Day, standing up only briefly to make a turn at the end. A number of the models were petite, clocking in at 5 foot 2 or 5 foot 4 – not the Amazons who usually stalk fashion shows. 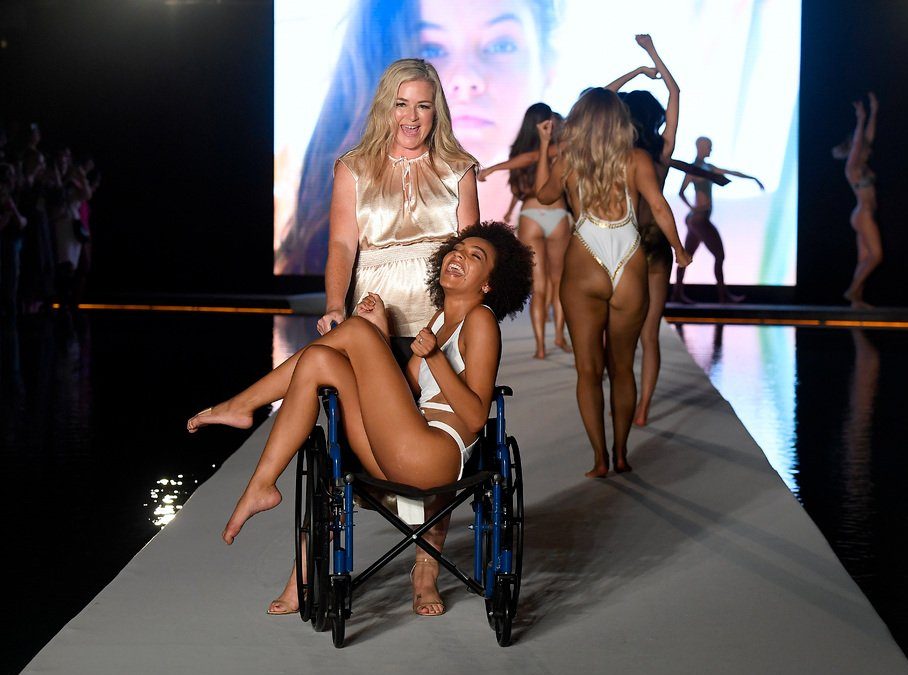 There were only a few floral suits. This one with ruffles and roses is worn by Courtney Smits, who was both a “walk-in” and something of a ringer. She’s a former Miss Virginia USA. 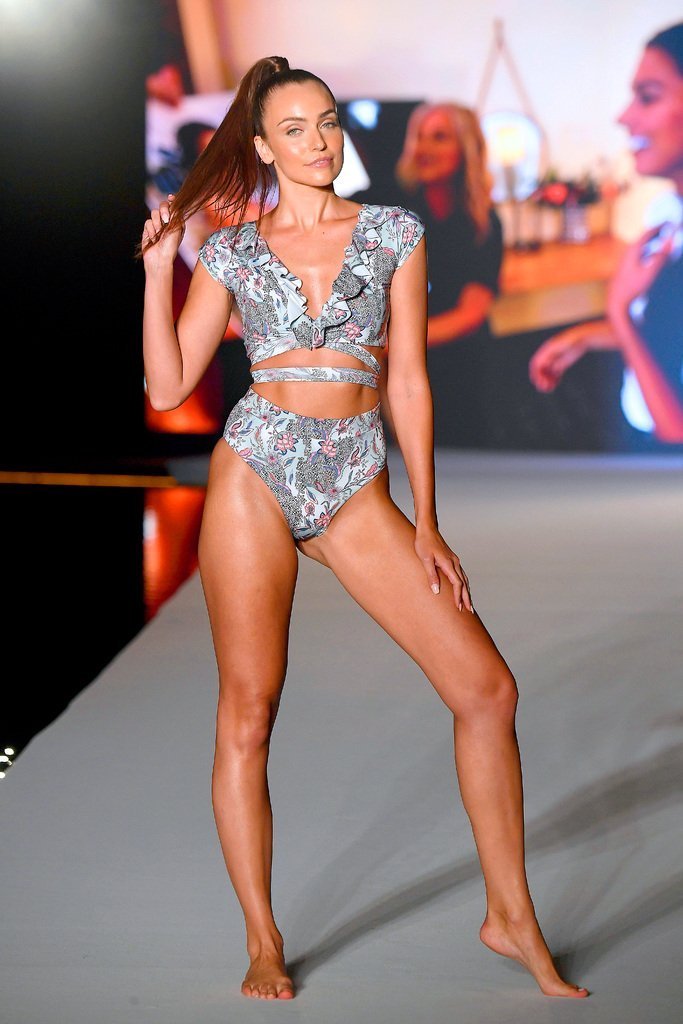 Among the professionals who successfully tried out for the show was Hyunjoo Hwang, a model from South Korea who wore a tiny bikini with, as far as we can tell, pastel hibiscus flowers. 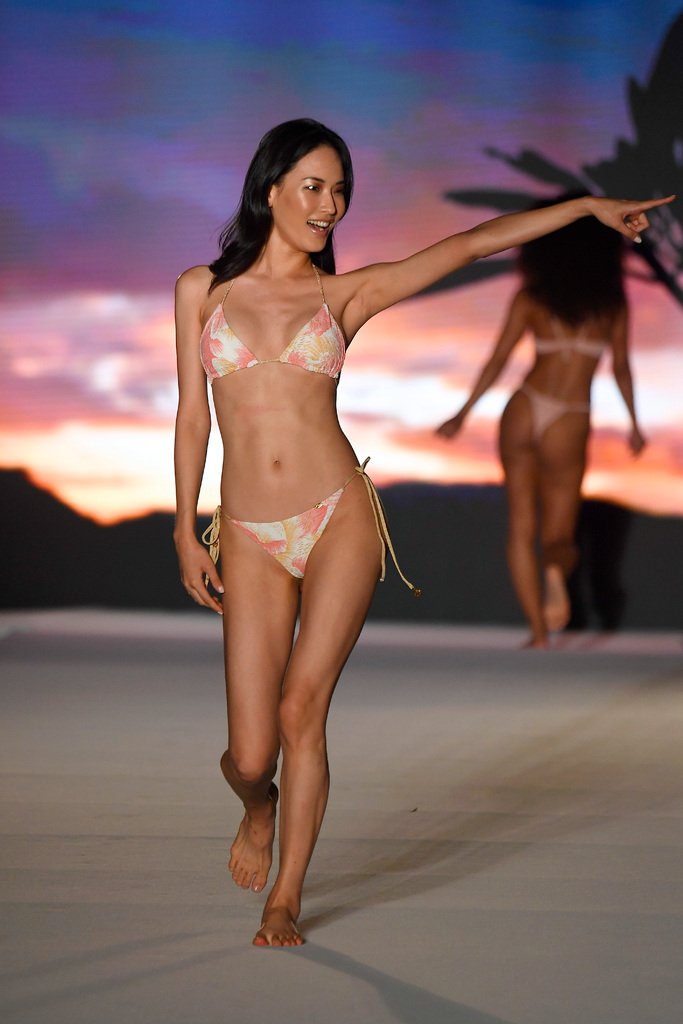 The 55-year-old model Kathy Marie Jacobs, from Calabasa, California, was another open-call winner. Kathy, 5 foot 4, proved she deserved to wear a bikini too.

One of the models Sports Illustrated brought to Miami, the Russian model who had her break-out with Victoria’s Secret in 2015, Vita Sidorkina, did wear one of the few floral or botanic print bathing suits.

The biggest surprise of the show, however, came when the 25-year-old Christie Valdiserri, another casting call winner, whipped off her blond wig to reveal that she was bald. Valdiserri is not a cancer survivor, but a dancer and fitness instructor who has alopecia, an autoimmune disease that can cause hair loss. In many cases this is temporary. In hers it has been ongoing for several years. 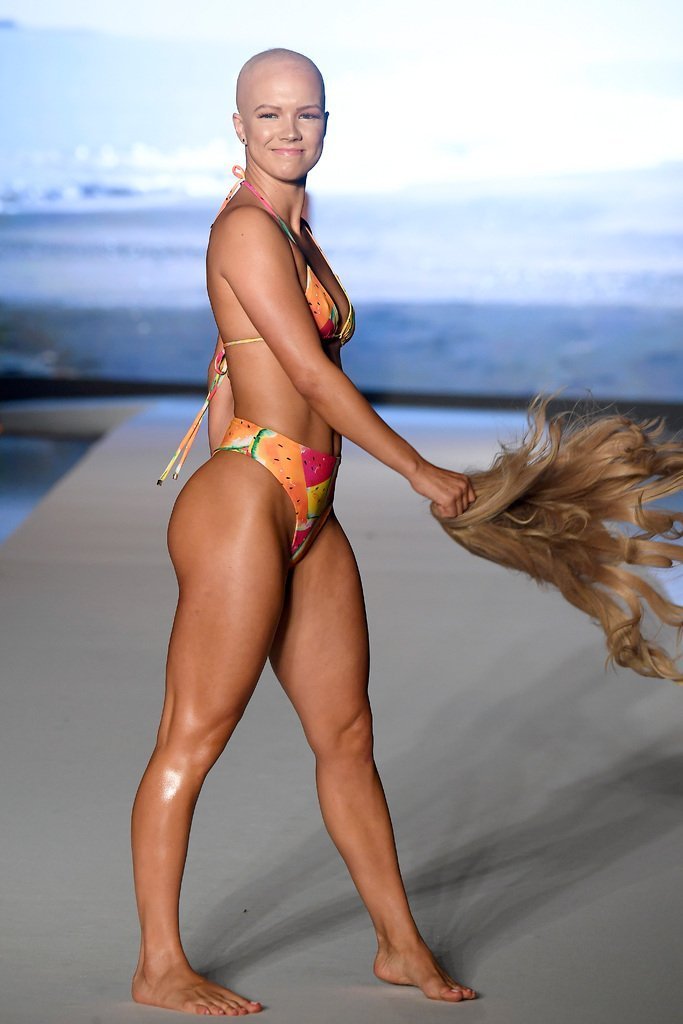 There were, of course, other swimsuit shows during Miami Swim Week, including those by the Brazilian designer Sinesia Karol, and swim suit designers Trina Turk, Nu Wave, Charmosa and Revival.

Charmosa even revived flower crowns for its models, along with some flower motifs, including flowers running down the sleeves of cover-ups. 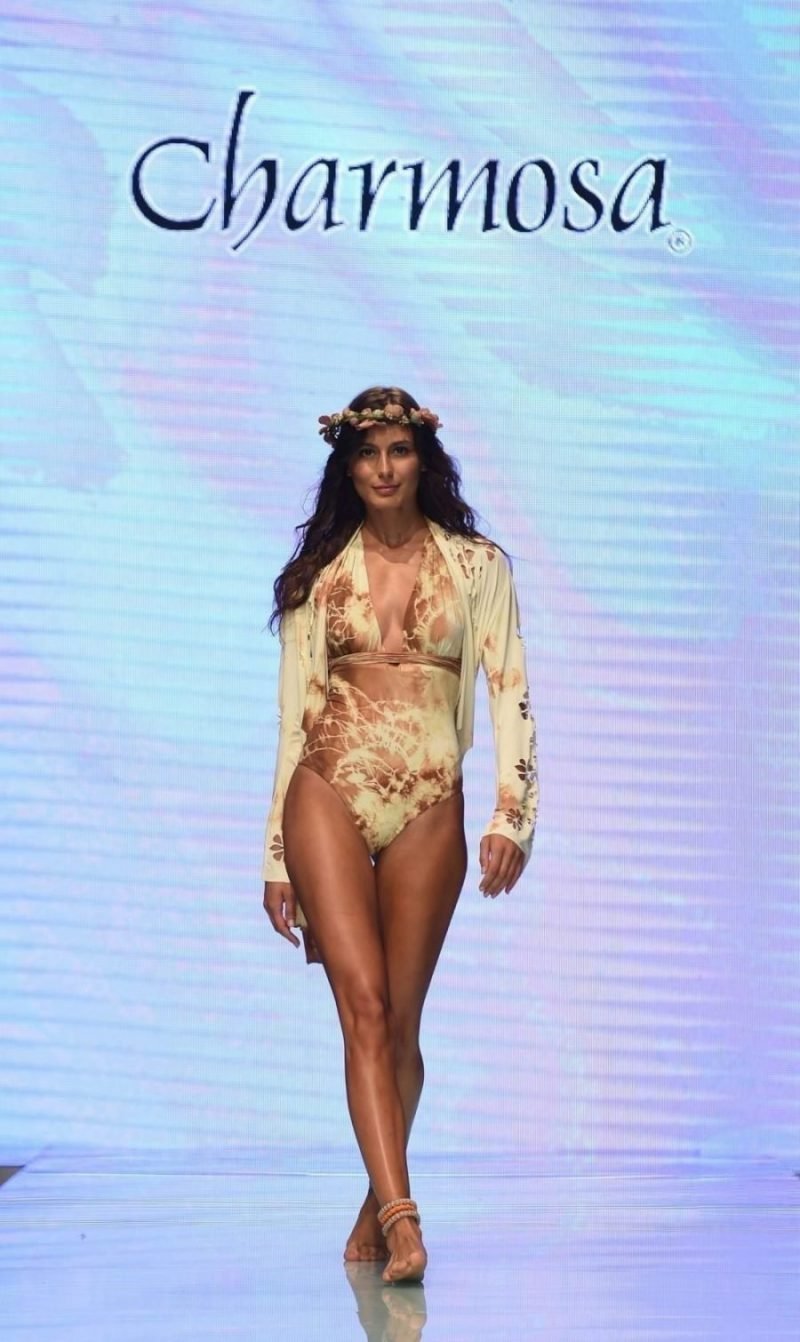 Also during Miami Swim Week, a charity event at the Setai for Style Saves had some of the cutest models of all, showing off Kai Lani styles for children and bikinis by others including Macaed, and Abruzzo Swim. Style Saves is a local charity that provides back-to-school clothes and supplies to underprivileged children. That long-sleeved top below is one of swim-weeks’ 2019 trends, according to Harper’s Bazaar along with Revival’s super-high thigh-cuts. 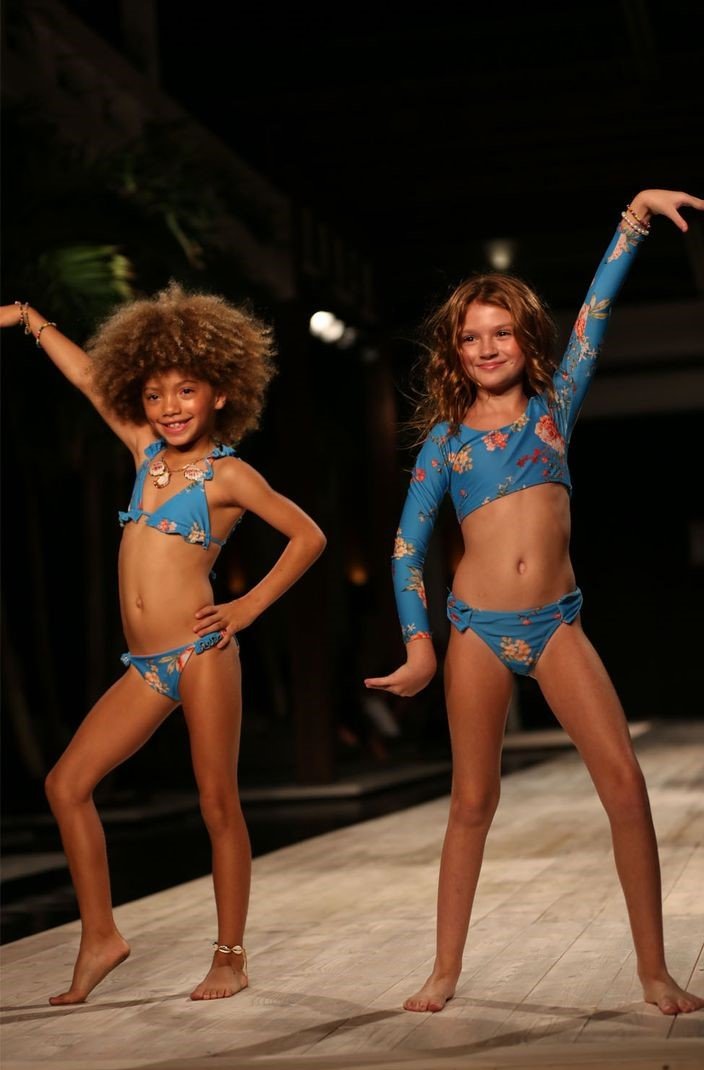 Anyone interested in buying the Kai Lani line would be happy to see their children’s floral suits below, about $88 each: 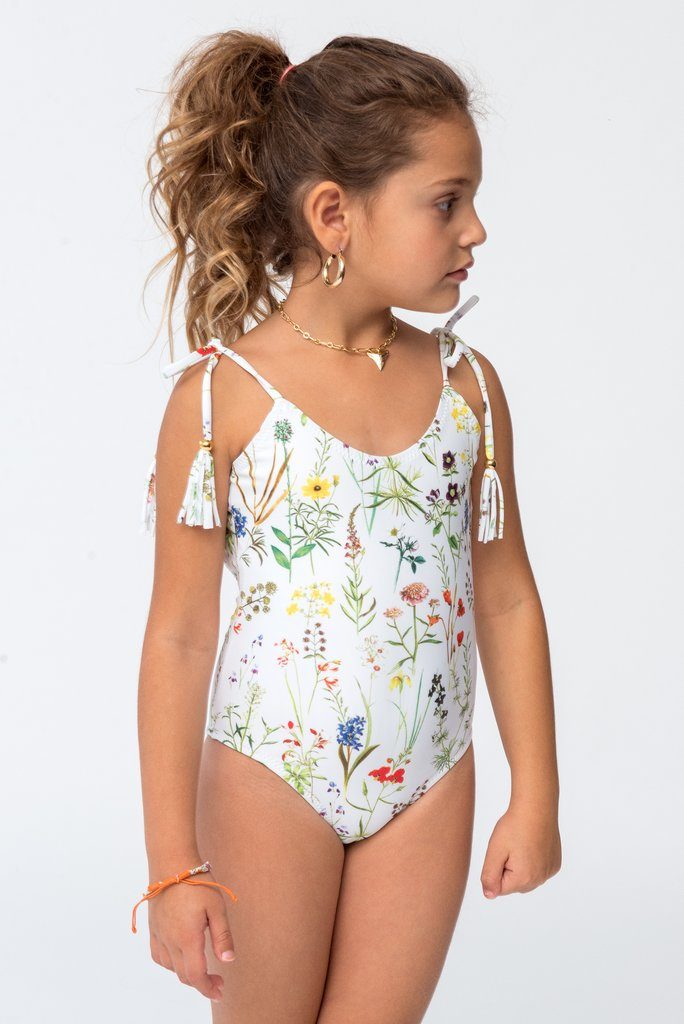 But before we leave the subject of bathing suits, let us mention a welcome new development: the swim skirt. Not the dumb skirted bathing suit, which never managed to be a skirt, now did it? We’re talking about something that actually looks like a skirt, and has a suit bottom under it. It managed to sell out wherever it was offered. This particular Hawaiian floral print swim skirt is from M&Co and sells for a mere $20, but other companies offer similar ones. 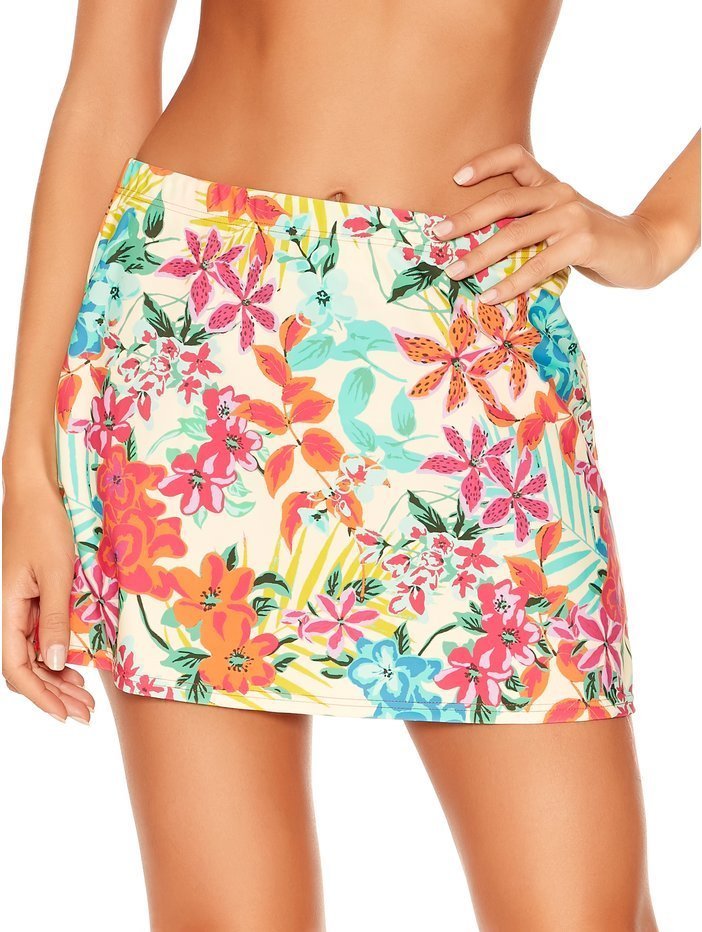 Swim skirts are sold as individual items, like tankini tops. And can be matched with a tankini. Or a bikini. Or a cover-up.