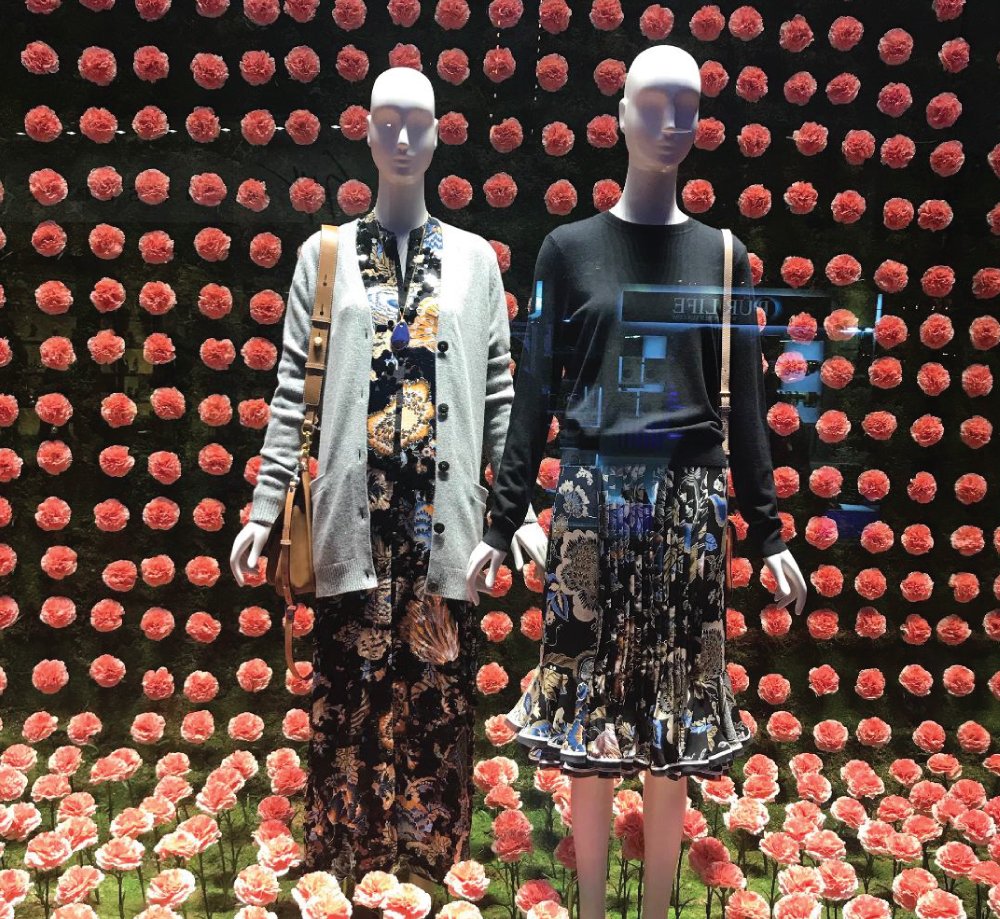 Some said the floral wave peaked when Gigi Hadid walked the Moschino runway dressed as a giant bouquet of flowers. Or when Rodarte did its 2018 fall runway show, a dream of nymphs with flowers in their hair, one of the most feminine fashion shows ever staged. 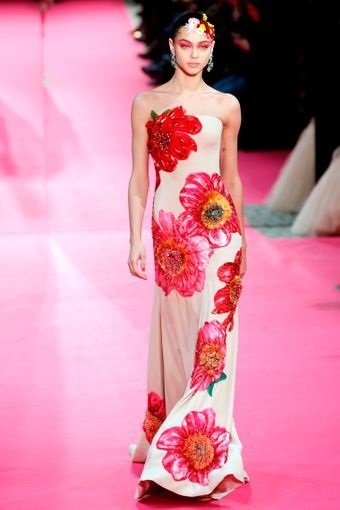 But here we are in 2019, and in Paris, Alexis Mabile sent his models down the runway in close-fitting floral caps; one sizzling white dress was splashed with giant red flowers. A sensation. 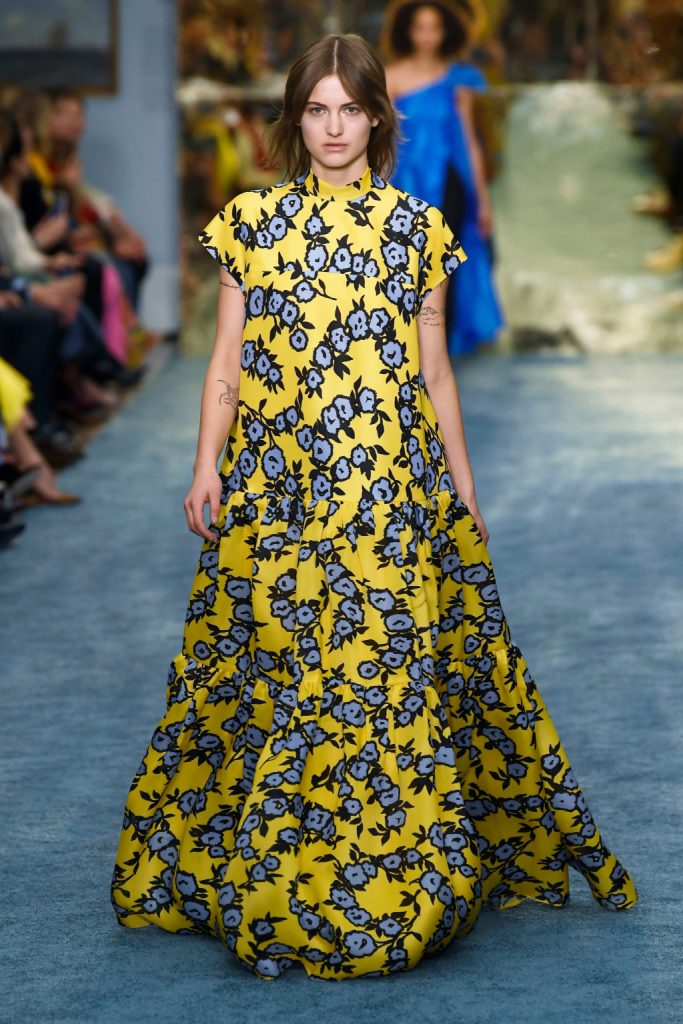 These are big, bold flowers, wandering all the way down a tent-like dress, to the floor and beyond. 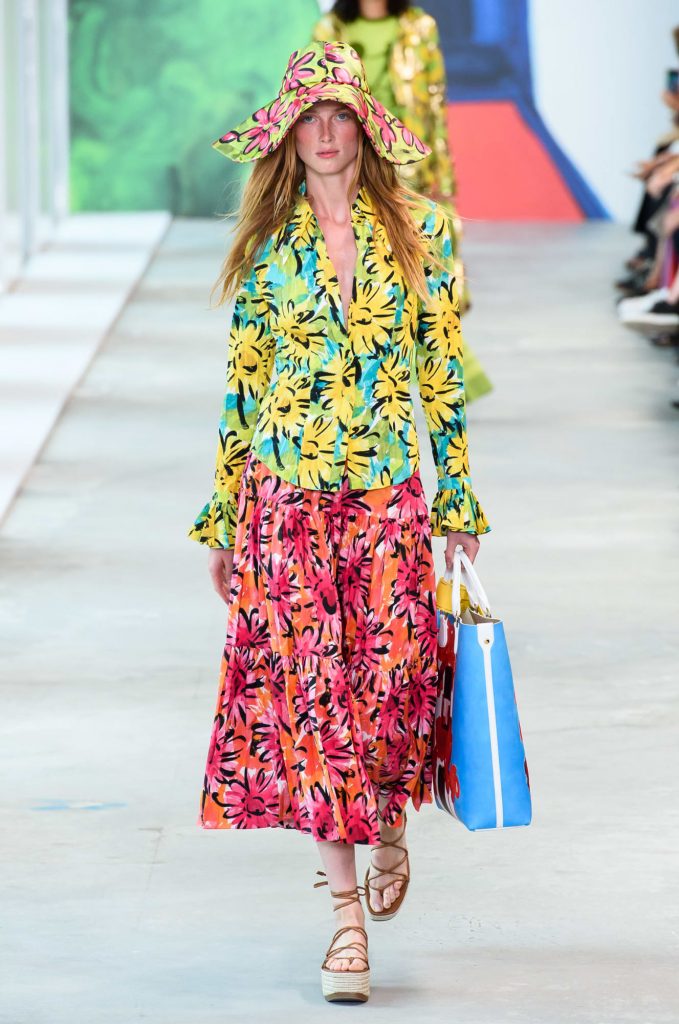 But Michael Kors had already outdone her. He put cartoon-size flowers on blouses and skirts in his spring line shown last fall: green/yellow and red/orange, with floppy hats and contrasting belts, shoes, totes. It was the full schmatta.

Tory Burch showed flowers for her winter line. Winter! The Kooples sold out all sizes of their floral-print faux-fur winter coat. Flowers, it seems, are now year-around.

Whether it has been the effect of having two lovely duchesses wearing designers’ clothes, or the turnover in personnel at some of the top labels, something that has given a jolt of electricity to fashion.

Whatever the reason, there is a revived interest in exploring bright colors and florals.

Still, 2018 did see a bumper crop of flowery fashions. Look at what Harper’s Bazaar dubbed the “must have dress” in its fall fashion issue, a floaty toile by Oscar de la Renta.

Emily Blunt promoted “Mary Poppins Returns” in December with the floral dresses she favors, including a dress embroidered with white and red daisies on CNN, and on CBS Sunday Morning, a dress giddy with tiny flowers on red and blue panels.

Last year she wore Alexander McQueen’s floor-length gown embroidered neck to hemline with flowers to the premier of “The Girl on the Train.” And people still remember her Dolce and Gabbana gown totally embroidered with crimson roses.

At the Emmy Awards in September, seven television actresses wore flamboyantly floral dresses for the occasion, from Connie Britton in a blue number that could have waltzed through a 1950s country club dance, to Millie Bobbi Brown in a sweet bell-shaped dress that only a teenager could wear to Holland Taylor and Laurie Metcalf in sophisticated dresses with floral appliques, one quiet, one vibrant, to Tracey Ullman, wearing a riotous number that only a comedian could pull off.

You expect to see little flowery sneakers and frocks on twenty-somethings in spring and summer. But florals in 2018 went beyond season, beyond age, and beyond dowdy. Sarah Burton, who has taken over Alexander McQueen, lavishly embroidered flowers on denim dresses, and charged princely sums for them. 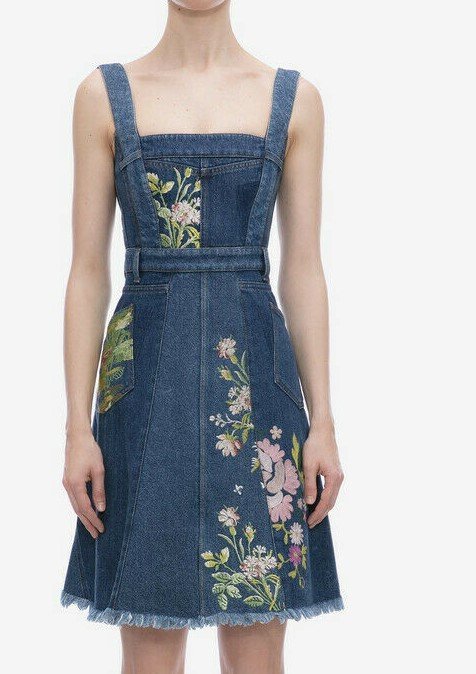 Here’s what Vogue wrote about the street styles Phil Oh shot for fall 2018:

“Like pastels, florals are no longer reserved for spring. In fact, we have a new theory: As the weather gets colder and grayer, your florals should get brighter. Most of the prints we saw on the streets this season were super-vivid, graphic, and even neon.”

Liberty of London has always been a haven for florals. But last summer it turned its windows over to a display of accessories by Richard Quinn who took Liberty’s distinctive rose pattern and blew it out onto accessories, all in the spirit of over-the-top love of flowers. 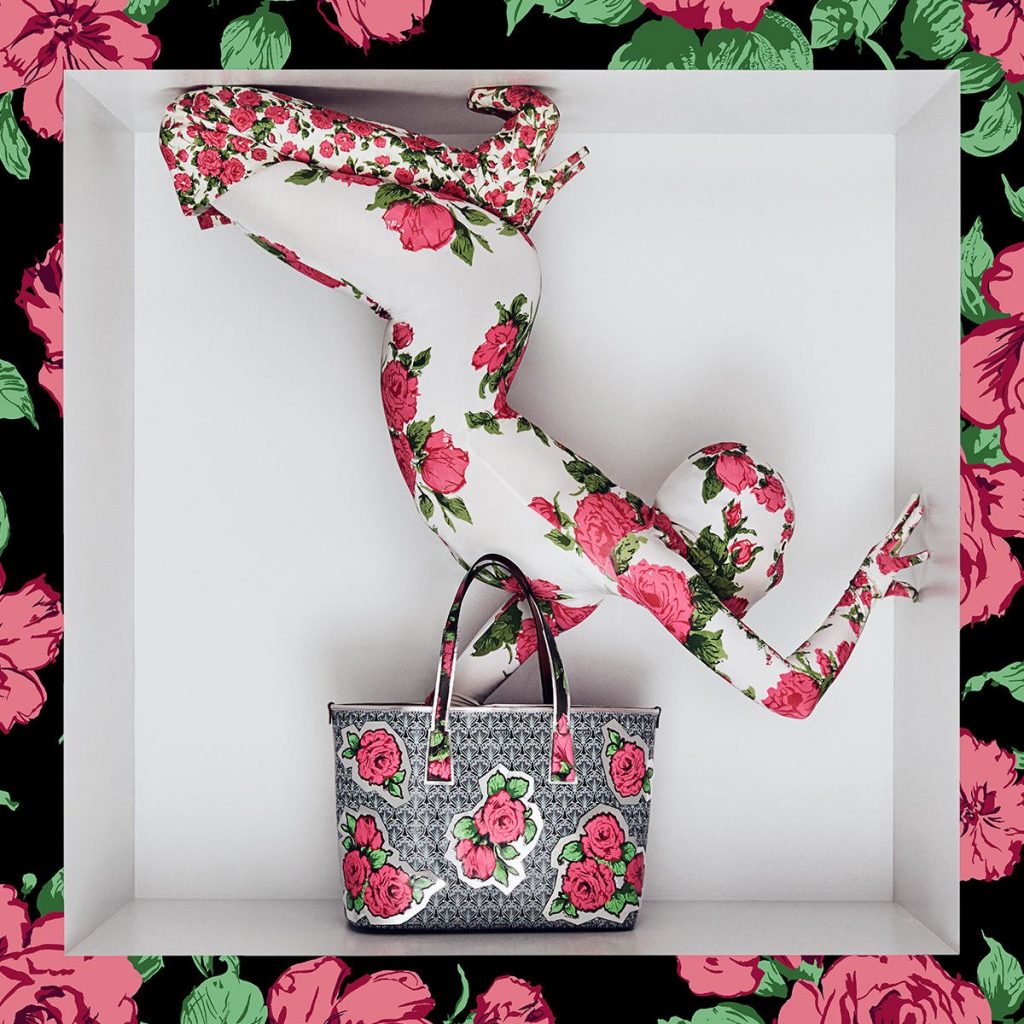 And these florals weren’t just for the frisky 20-somethings.  Andie McDowell, 60, wore a Stella McCartney design with a transparent shell over panels of floral prints in Harper’s September fashion issue. There is a Valentino super-graphic hooded floral raincoat in bright red, pink and yellow that would look great on anyone from 6 to 90. 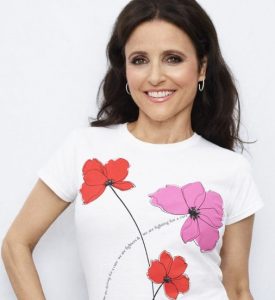 The T shirts designed for breast cancer Key to the Cure in 2018 and worn by Julia Louis-Dreyfus, a breast-cancer survivor, portrayed three beautiful poppies.

Which New York designer seems least likely to show something flowery? Calvin Klein, right? But there he was in London, with a deconstructed baby-blue sleeveless cable knit sweater over a knife-pleat green flower-print skirt with a steep asymmetric hem. A lot of things going on there, Calvin, and we haven’t mentioned the dog halter!

Dog halter! What Virgil Abloh is doing single handedly at Louis Vuitton with this abbreviated vest-over-jacket-thing is turning men into proud peacocks. 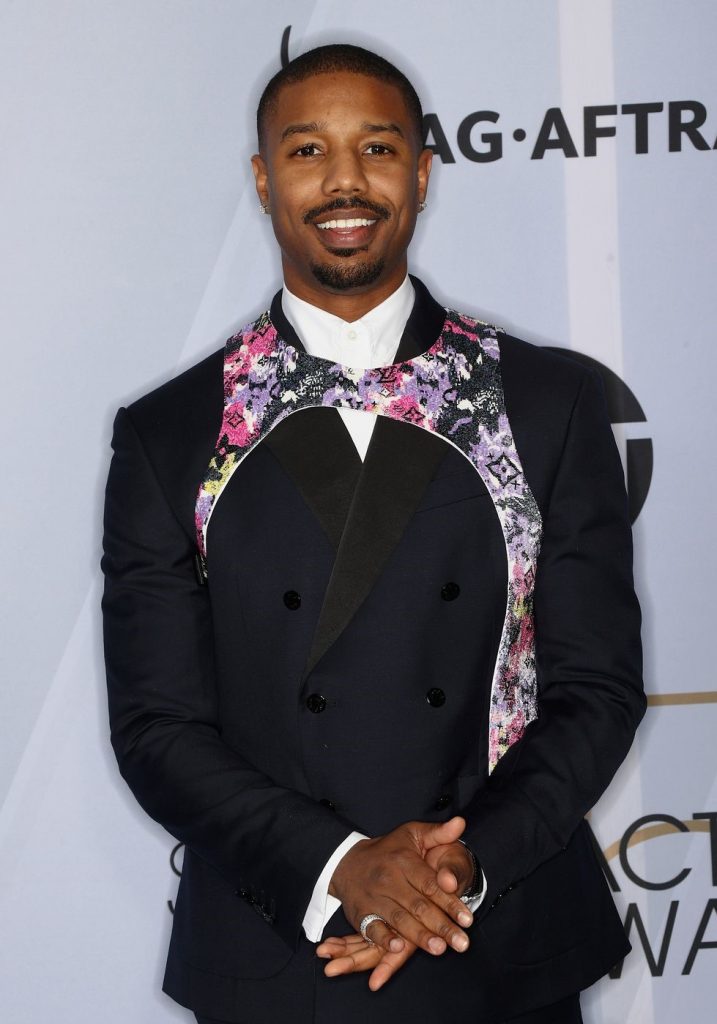 Abloh insists that the contraption he got two men to wear on the red carpet in January – Timothee Chalamet and Michael B Jordan, above, at the SAG awards – was not a halter but an empowering “bib.” Abloh has made a complete convert of Justin Timberlake.

Anna Sui showed dresses with full floral designs, one of them a black number with plate-size flaming red tulips. Naeem Khan showed a floor-length gown of such beautiful, slender panels of blue, white and orange that they defied definition – flower or butterfly? Another Khan look, a gossamer hooded top left no doubt: beaded and mirrored daisies and carnations. 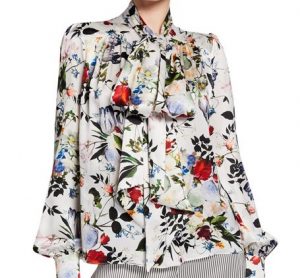 Erdem introduced a line at H&M in November, the other end of the price scale from his Lucien flower print tie-front silk blouse available at Bergdorf Goodman for $1,454. The secondary market in a sleeveless floral print pleated Erdem X H&M blouse, size 10 (everything else in the store except for floral print socks and a plain white shirt sold out) is $130.

Even though shoppers up north were wearing these clothes with their pleats, ribbons, cutsey prints and thin fabrics with fur-lined boots on muddy streets. The smart London magazines dubbed the look “Little House on the Thames,” and the New York Times noted the number of sophisticated young women, especially in Brooklyn, who look like they are ready to pack a mule, or sit down to a butter churn. Felicity Jones wore a custom-made, buttoned-up-to-the-chin Erdem dress at her wedding in July, and looked ever-so-much the virgin. Quite the feat at 34.