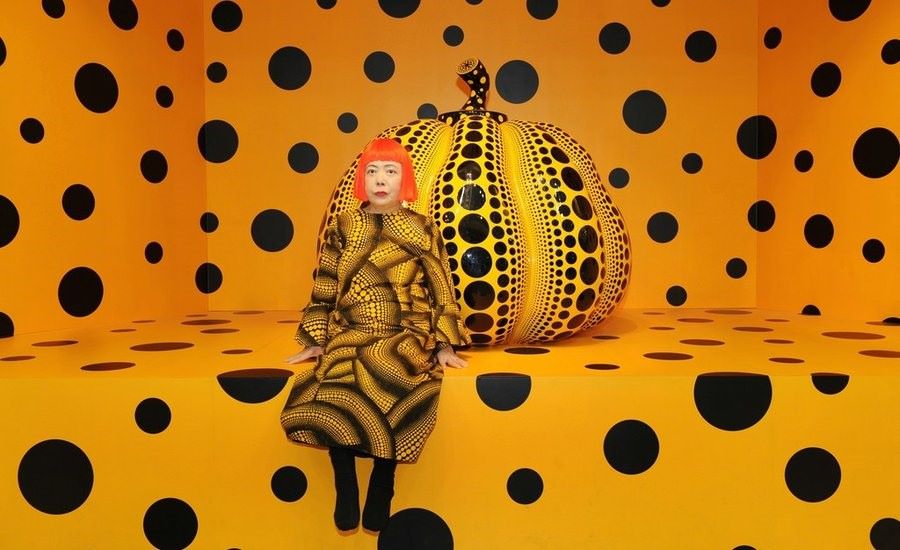 Starting next spring, visitors to the New York Botanical Garden will have a once-in-a-lifetime chance to experience Yayoi Kusama’s first large-scale exploration of her life-long engagement with nature. The interactive exhibition, which begins May 2 and closes on November 1, 2020, will include her early botanical drawings and soft sculptures, work from her experimental years in New York in the 1950s and 1960s (although it is unlikely the Botanical Garden will allow her 1967 nude dances in protest of the Vietnam War), assemblages and, of course, the giant pumpkins marked with polka dots that made their first appearance in the art world in 1991.

“While these works appear as mostly abstract forms to viewers, they are manifestations of how she sees the universe, specifically the natural world,” says Carrie Rebora Barratt, president of The New York Botanical Garden.

Although there have been other recent Kusama retrospectives, this one will features some works that are rarely seen, including drawings she made when she was a young art student.

Kusana was born in 1929, and it seems that the bright red wigs she wears today seem inspired by her hair style as a child.

Her early years were a nightmare. Her parents, although rich thanks to her mother, were in a loveless marriage. Her father was often absent. Her mother was cold and treated her harshly.

Kusama suffered from hallucinations, even as a child, and found refuge in art. She had already established herself as a traditional artist as a young woman in Japan before she left in 1957 to live in New York City. There she found some success with shows of experimental works. 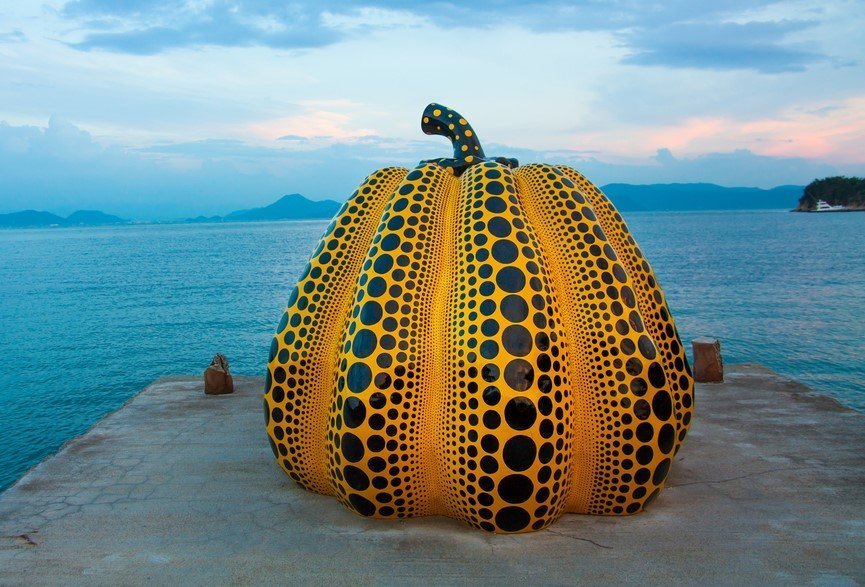 Donald Judd bought a painting called “Nets,” made with tiny repetitive loops of paint. She was poor but ambitious and extremely productive, with work including the net “paintings,” soft sculptures and, in 1965, her first infinity mirror room. Among friends and admirers were Mark Rothko, Frank Stella, Georgia O’Keeffe, Joseph Cornell and Andy Warhol. She borrowed money from most of them and begged her parents for support.

Her work was shown at the Museum of Modern Art and in several small galleries. Some sold for as much as $200. But conceptual art could not be sold. And the happenings, with polka dots applied to naked people dancing on Wall Street, made news back in Japan. The news did not please her parents.

She returned to Japan, and her mental health began to falter. By the mid-1970s she was living in a Tokyo mental hospital and spending much of her time writing. There were some mentions of her artistic career, mostly in retrospectives of pop art, happenings and the beginnings of minimalist art and conceptual art.

Her artistic career revived with the pumpkin sculptures in 1991, when she was in her 60s.  “It seems that pumpkins do not inspire much respect, but I was enchanted by their charming and winsome form.”

At that time she felt that she herself did much merit much respect. But the giant pumpkins were just the beginning. As productive in her 60s as she had been in her 30s, Kusama has reveled in commissions and new ideas. Most of them involve the idea of repetition, which she finds calming and satisfying. The large sculpture below was offered for sale at the Art Basel Miami Beach show in December. Such pieces, when they come up for sale, typically sell in the millions of dollars. 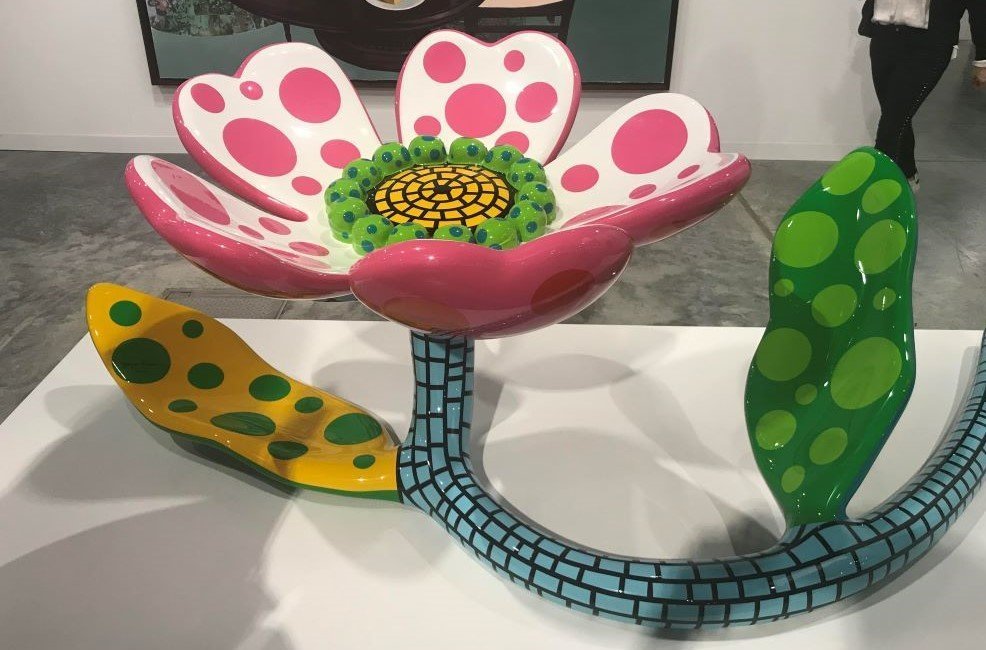 One of her most recent works, “Flower Obsession,” which was commissioned for the National Gallery of Victoria Triennial in 2017 in Melbourne, was inspired by one of her childhood hallucinations. The artwork, which begins with empty white rooms, invites visitors to place stickers of plastic red Gerbera daisies wherever they can reach. 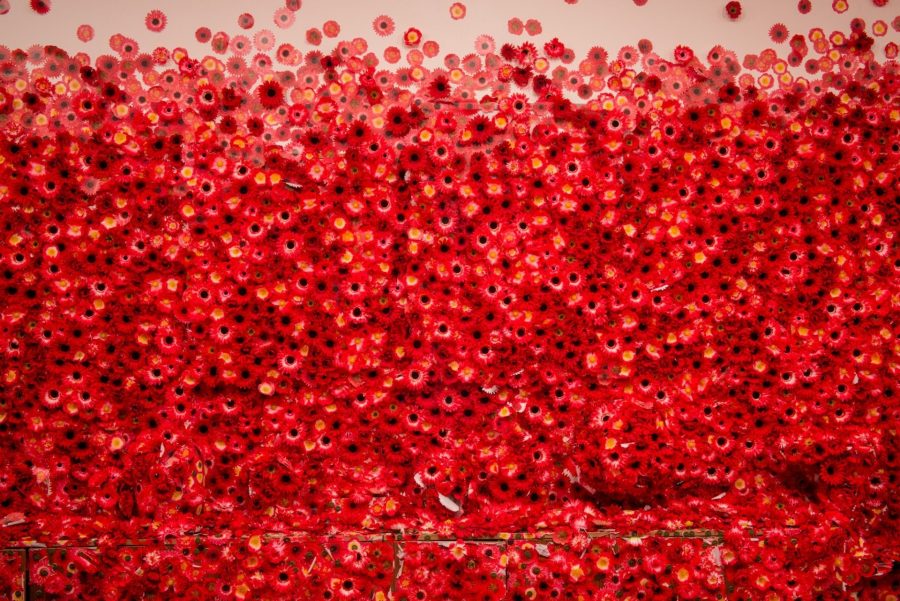 “One day, after gazing at a pattern of red flowers on the tablecloth, I looked up to see that the ceiling, the windows, and the columns seemed to be plastered with the same red floral pattern,” Kusama said in a press release. “I saw the entire room, my entire body, and the entire universe covered with red flowers, and in that instant my soul was obliterated … This was not an illusion but reality itself.”

We can hope the Botanical Garden will include “Flower Obsession” in its exhibition. They mention in their press release that several buildings on their grounds will be used. The accumulation of stickers over a period of months will lead to a changing interior.

Children are more than welcome to participate, as they were in “Obliteration Room” (2002), which used polka dots of various colors to cover walls and furniture in a typical suburban layout in gallery space. “Obliteration Room” has been staged several times, including at the David Zwirner Gallery, above, and has proved to be so popular that people lined up at the door.

Another popular interactive Kusama work, “Infinity Room,” involves lights and mirrors. Newer ones have featured pumpkins, although Kusama’s first ones, back in the 1960s, involved looking through peep holes into a mirrored space.

In addition, the Enid A. Haupt Conservatory will house a spectacular horticultural showcase honoring Kusama based on one of her hypnotic large-scale paintings. For more information about the Kusama show next May go to the Botanical Garden web site or call 718.817.8700.

Luckily the David Zwirner gallery will open a show of Kusama’s new work at 537 West 20th Street in New York in November, so we will only have to wait that long to see what surprises she has in store for us.