White Flowers, A Symbol of Hope for Alzheimer’s Disease 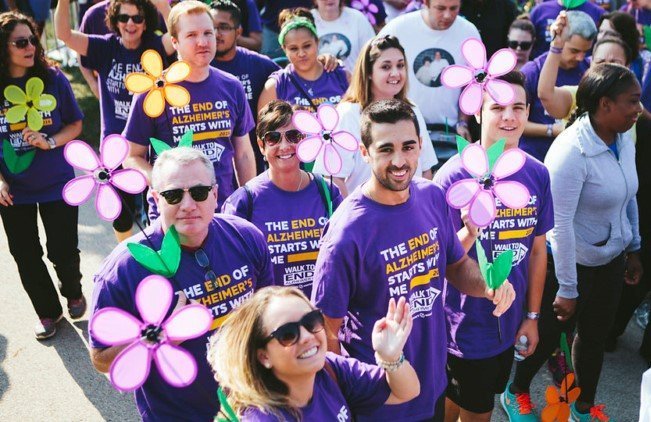 For years the primary colors at the annual Walk to End Alzheimer’s have been purple t-shirts, and orange, blue, yellow and purple flowers. At the end of the walk, these flowers are planted in a Promise Garden, the promise being the end of Alzheimer’s.

Now a new color has appeared: White, to represent the hope for a cure.

All the colors are symbolic. The American Alzheimer’s Association, based in Chicago, Illinois, chose purple as “our signature color, combining the calm stability of blue and the passionate energy of red. Purple makes a statement about our Association and our supporters: we are strong and unrelenting in the fight against Alzheimer’s disease.”

Marchers on the money-raising walks, which take place in 600 locations across the country from September through November, carry flowers representing how their lives are touched by the devastating disease, which is the leading cause of death for one out of six people in this country:

Carrying a purple flower means you lost someone to Alzheimer’s.

Carrying a yellow flower means you are a caregiver to someone with Alzheimer’s or dementia.

Carrying a blue flower means you are living with Alzheimer’s.

Carrying an orange flower means you support the Alzheimer’s Association. 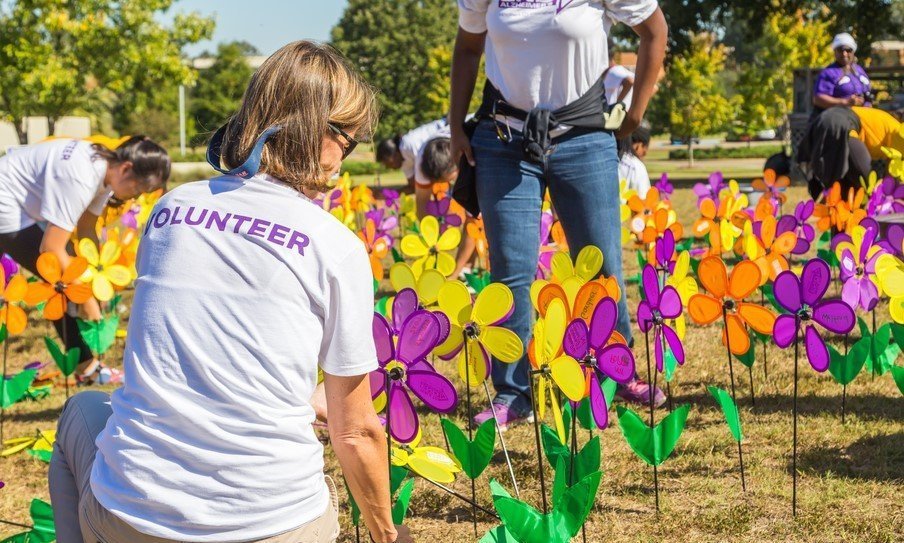 The white flowers were introduced last year, when news was positive that there might be ways to prevent or slow the disease. It is expected that this year, more and more marchers will be carrying white flowers.

The goals of the American Alzheimer’s Association is to eliminate Alzheimer’s disease through the advancement of research, to provide and enhance care and support for all affected and to reduce the risk of dementia through the promotion of brain health. Brain health, according to an article titled “The projected effect of risk factor reduction on Alzheimer’s disease prevalence” in the Lancet Neurological in 2011, was at higher risk in people with diabetes, who were obese in midlife, who smoked, who had low levels of education, who were inactive, and who had a history of depression or high blood pressure in midlife. These were additional factors, of course, to the inherited risk of Alzheimer’s disease.

At the Alzheimer’s convention in Los Angeles in July, one paper looked at the prevalence of Alzheimer’s in women, who suffer at a rate double that of men. While women have greater verbal dexterity, which disguises their diagnosis longer, studies have found distinct genetic differences in which genes seem to affect women more than men and vice versa. Research continues.

Another promising development announced at the convention was a blood test for Alzheimer’s and dementia. Dr. Akinori Nakamura of the National Center for Geriatrics and Gerontology in Obu, Japan, said the blood test correctly identified 92 percent of the people who had Alzheimer’s and correctly ruled out 85 percent of who did not have it. That gave it an overall accuracy of 88 percent. It identified the kinds of proteins that form plaques in the brains of those who develop Alzheimer’s and other types of brain impairment. The earlier the diagnosis, the faster changes can be made and some treatments begun, with the hope of slowing the course of the disease.

Whether the hope is for a cure, for prevention or for ways to slow progression of the disease, these are all reasons for hope for more white flowers in the future.

Information about the walk nearest you is available from the national organization by zip code or city. The organization also has a hotline (1 800 272-3900) staffed 24/7 to help people, especially the families and loved ones of someone newly diagnosed, with any questions and concerns. – Linda Lee