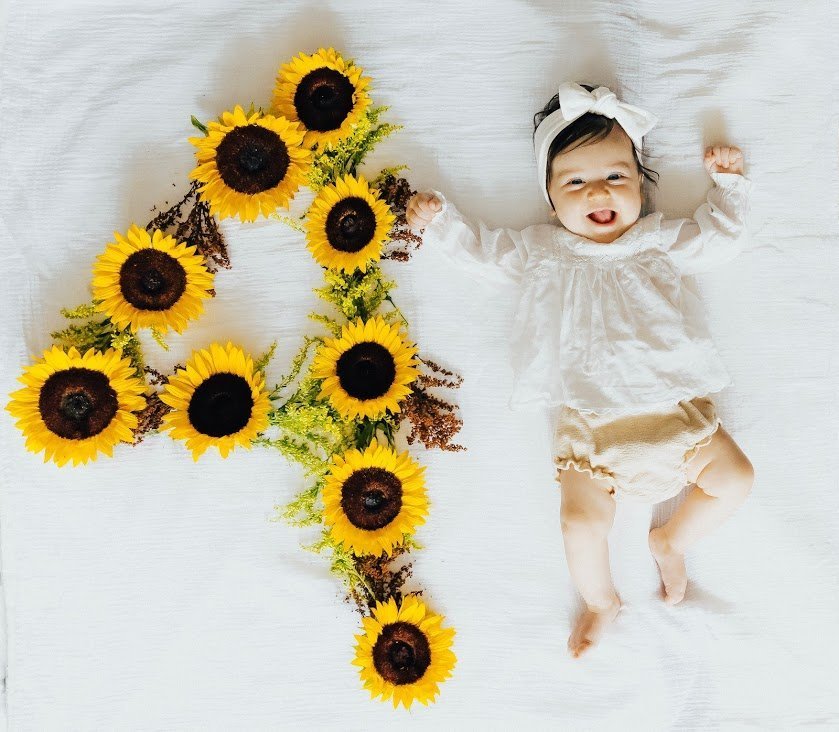 When Vanessa Khachane’s daughter River was born, she wanted to document all her baby’s milestones in a memorable way. As with many first time mothers, she surfed the web for ideas. Aha. She saw pictures of flowers used sculpturally to spell out each month and decided that was the perfect option for her baby’s keepsake first-year calendar.

After all, mothers feel they are in bloom with their pregnancy and after delivery, nature feels miraculous.

“Knowing that Pinterest shots are always a big jump from reality, I wanted to experiment and see how long I’d last and if I could get the pictures,” she says.

Her first step was getting a white blanket for her backdrop that she would use consistently throughout the year. She bought one she found on Etsy. The flowers were purchased from local grocery stores. “This posed a challenge when I moved after month six and only had one store close by which had minimal options,” she recalls. She used a 7D Markii camera, though says an iPhone could be great too. 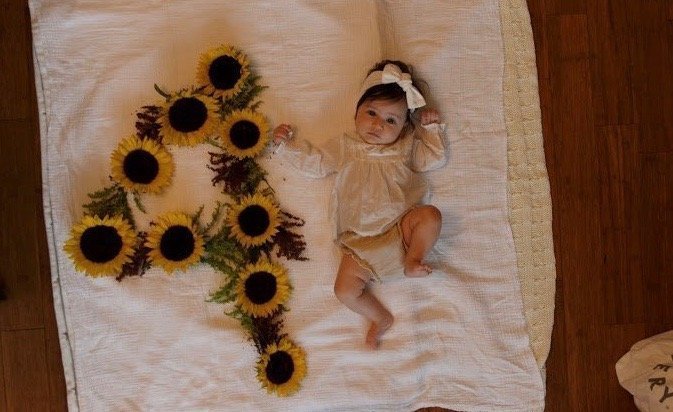 And then she practiced a few times to get the feel.

“The first few months were a bit rocky because I was just figuring it out as I go,” she says. “By the end, I had a system and could do it more efficiently. But that coincided with River being much more mobile and having less and less of a window to take photos before she started moving around and trying to eat them.”

Vanessa’s routine was to place the blanket near her sofa so she could take overhead shots.

“I stood on top of my sofa each time to try to get the overhead shots,” she says. “I tried to take a picture first thing in the morning when she was more calm and the light into my windows was best.  Though I couldn’t always control it. Then I just took a ton of photos and hoped one or two good ones would come from it. Sometimes I really liked the unplanned photos more than the planned ones.  They were more candid and fun to share than her just laying there smiling.”

Like first time mothers, Khachane often had limited time – especially when she went back to work, as a Google executive. Her advice is that you do the best you can with these projects. That is why when her time was so rationed, she condensed months 8, 9 and 10 into one fabulous photo.

Choosing The Right Flowers For Baby Month By Month Pictures

Khachane also creatively used the leaves of her flowers to create these floral sculptural bouquets. “I would wing it,” she says. Look around and find things all around nature and ideas will surface, she advises.

After she cut the flowers from the stems, she tried to put them in a bowl filled with water to prolong them. Though that didn’t last long since flowers get their nutrients from a flower’s stem.

“Since I used real flowers, I really grappled with the fact I was cutting the stems off and had to throw them away after each photo,” she says. “I didn’t like being wasteful like that and really felt bad about it.”

However, when she sees how beautiful and creative these pictures are of her baby, she smiles with pleasure. After all, the cuteness factor is off the charts! 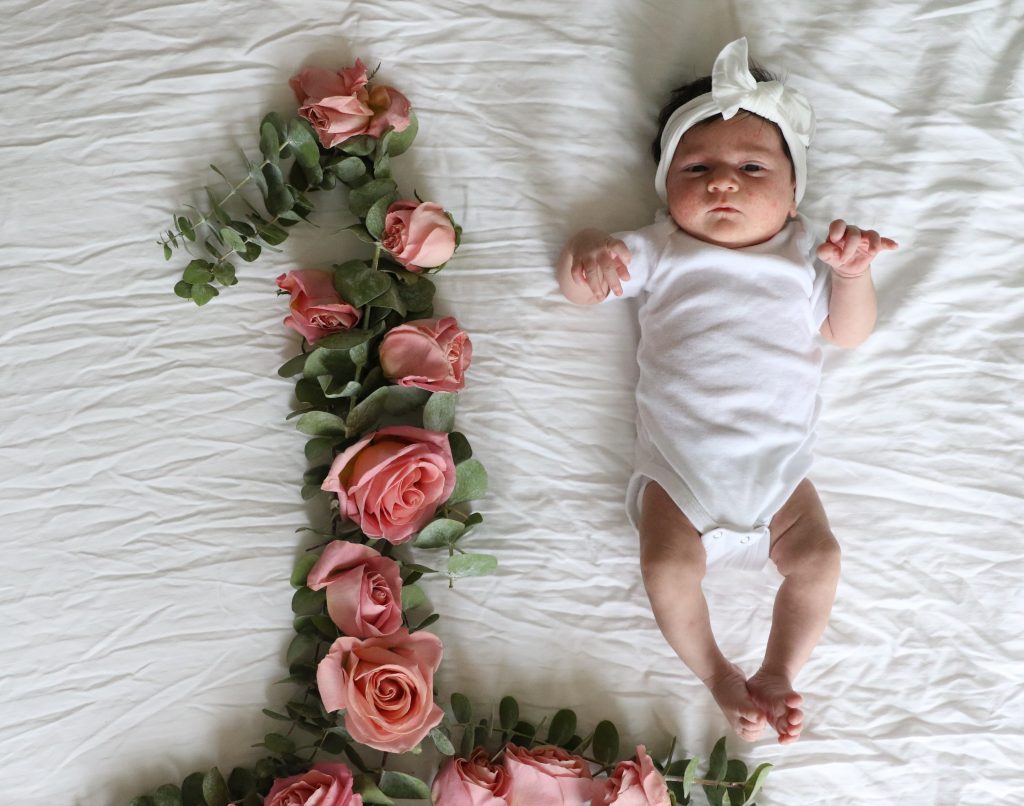 Here she used pink roses with stems. She had to buy a few bouquets to get enough stems and also have a few extra roses to make sure they were already budding. 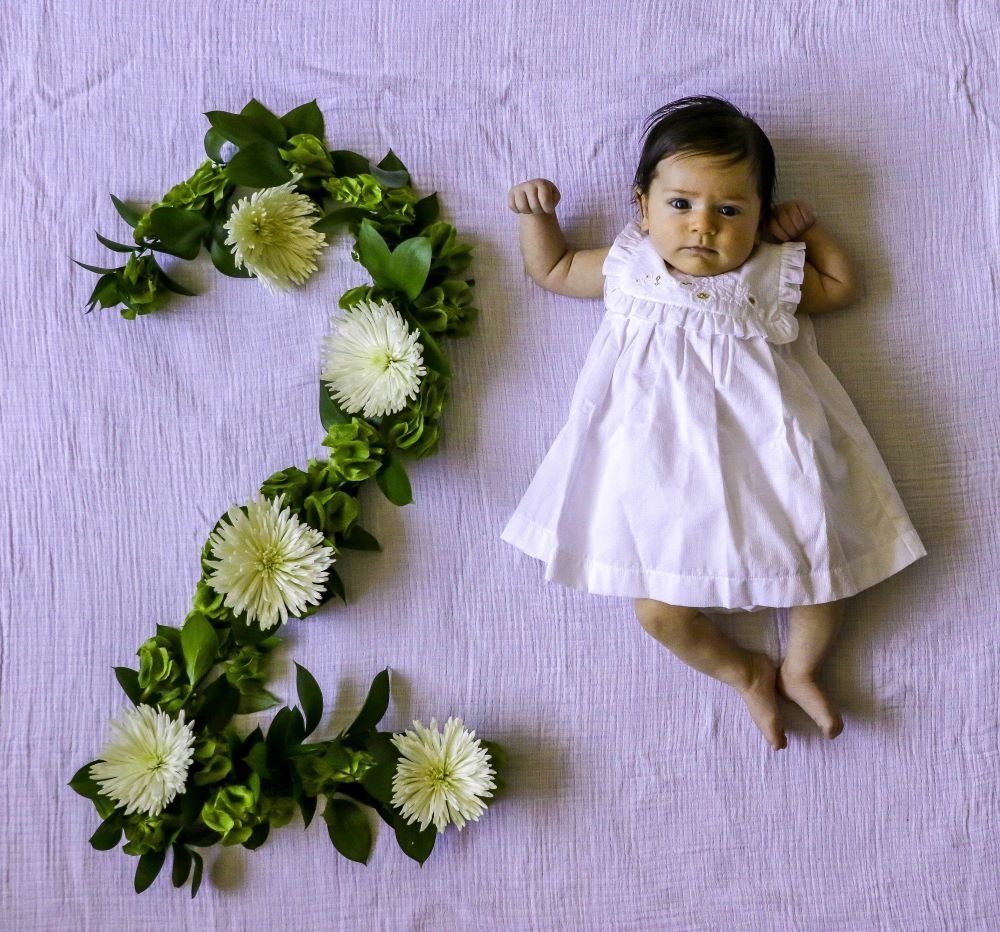 Definitely look at buying greens separately as your base for these fantastic shots. You can even cut some off a bush if you have a garden. Here River became fascinated with the flower. These hydrangeas were from a bush and luckily hydrangeas are attached to big lush leaves that are always a great backdrop. In fact, if you are having a party, place these leaves on any tray and put a flower on it. Caterers do that all the time for a stylish flourish.  Hydrangeas are also fun flowers because they are full of petals and are shaped like big bouncy balls. And kids are fascinated by them.

Sunflowers are a fun option. They also lie flat on a blanket easier. Khachane used other flora to connect the big sunny flowers in yellows and brown to match the sunflower to great effect. 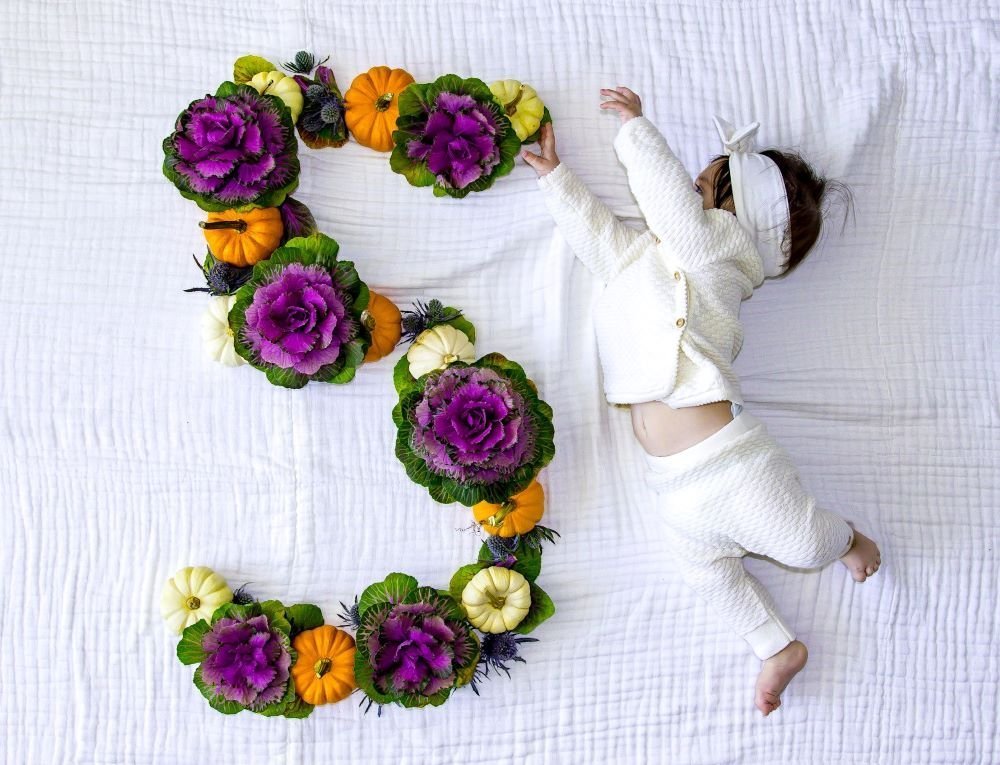 Since her baby’s fifth month correlated with October, she used little pumpkins as decor along with small cabbages. These cabbages with its burst of violet can be purchased at a nursery and come in all sizes. Little baby, little cabbages. Ditto for pumpkins which now do come in both orange and white. 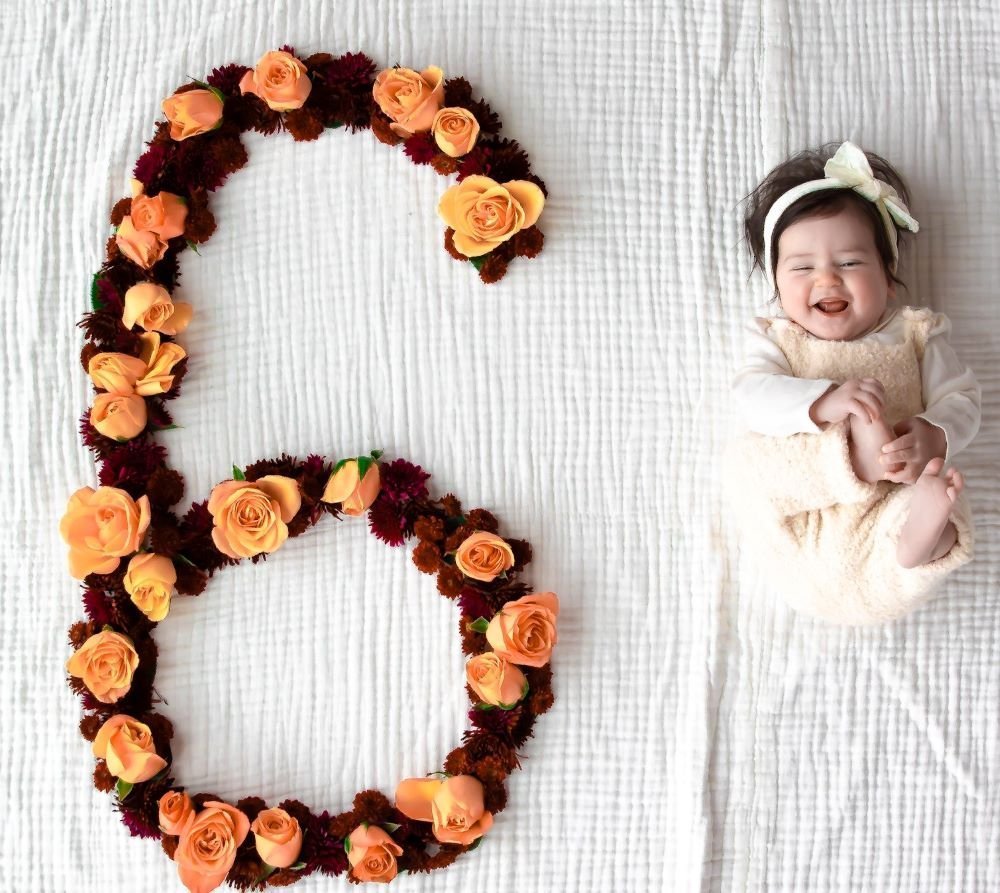 Here you have roses again – a good go-to flower. But because of the season, Khachane used darker carnations or chrysanthemums as the accent to great effect.  If the roses don’t open quickly, here’s a tip. Place a diffuser on the end of a blow dryer. Turn heat on low and wave it like a wand over the flower heads. Do it for one minute – you don’t want to overheat them which will cause wilting. It’s tricking the flowers into thinking its sunlight. 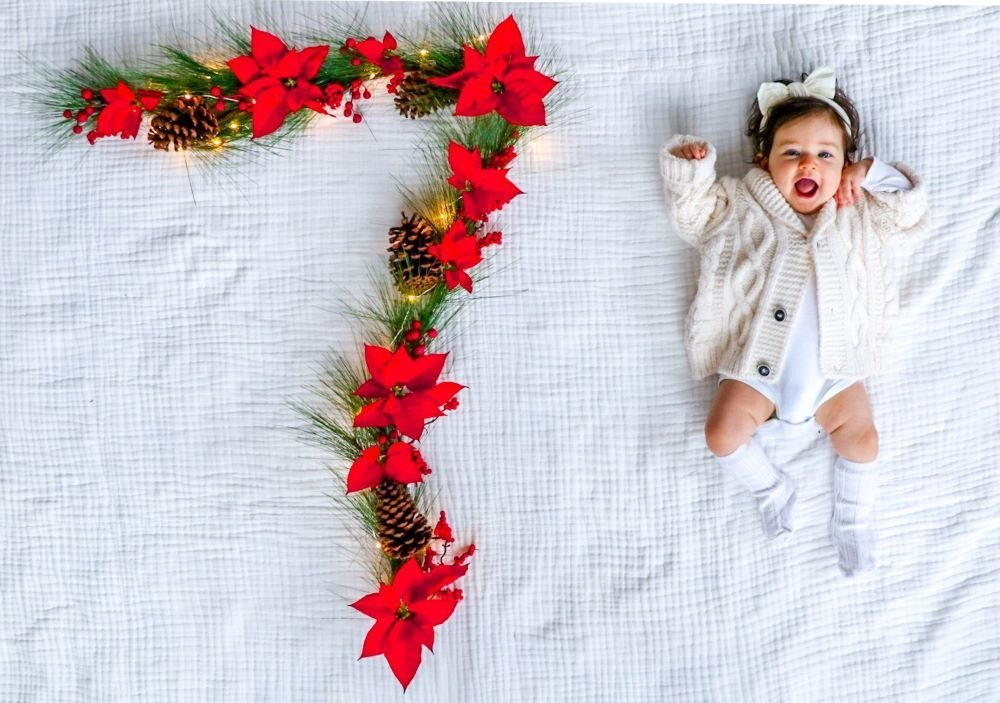 Poinsettia flowers with pine cones are a great option for the holiday when flowers are hard to come by. Furthermore, it immediately triggers what month this was when you go back down memory lane. She used pine as well to accent this milestone. 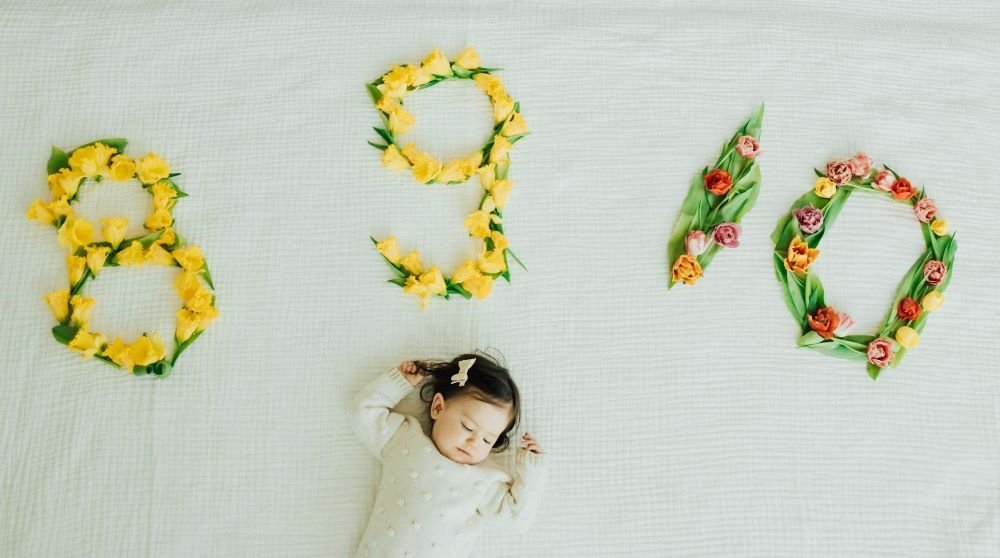 When life got too busy, she combined all the months in one photo shoot using a variety of roses. Gerbera daisies were the final month’s choice. Pink and pretty.

Since River had a big one year birthday, Khachane didn’t make the final month with a flower sculpture. “They change so much in the first year that it’s the best time to do it,” she says. However, one can certainly start doing yearly photographs using flowers as the background to beautify these images. It’s exactly what flowers do in nature too.