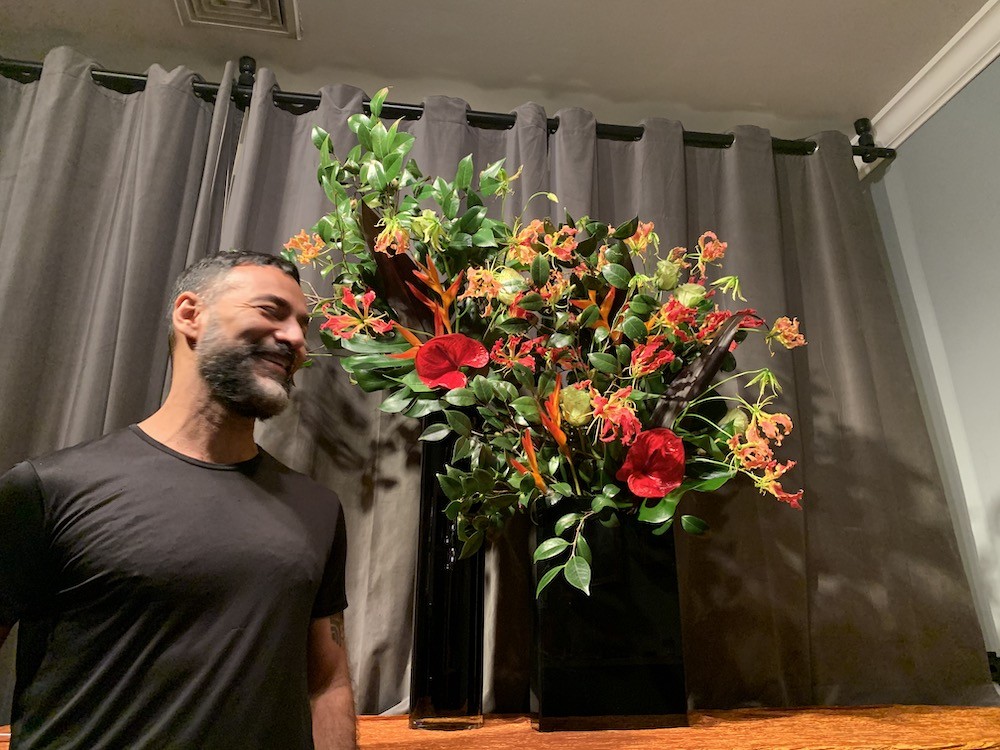 Oscar Mora could be called the jolly Green Giant. Because in his hands, all sorts of greens from camellia to monstera are sculpted into incredible works of art.

His distinctive style is sensual, bold and happy.

As a young painter in his native Caracas, Oscar Mora was inspired by the lush landscapes and vibrant culture of Venezuela. When he came to the United States, he quickly established himself as someone who had what we call a flair. It’s really also called talent.

With his degree in Interior Design from the Academy of Las Mercedes, Oscar actually began his career designing for photo shoots, fashion boutiques, and private parties. This gave him an understanding of the holistic piece of creating flowers to intersect with environments.

Since then, his floral creations have graced the pages of top editorial magazines and runways of NY Fashion Week. 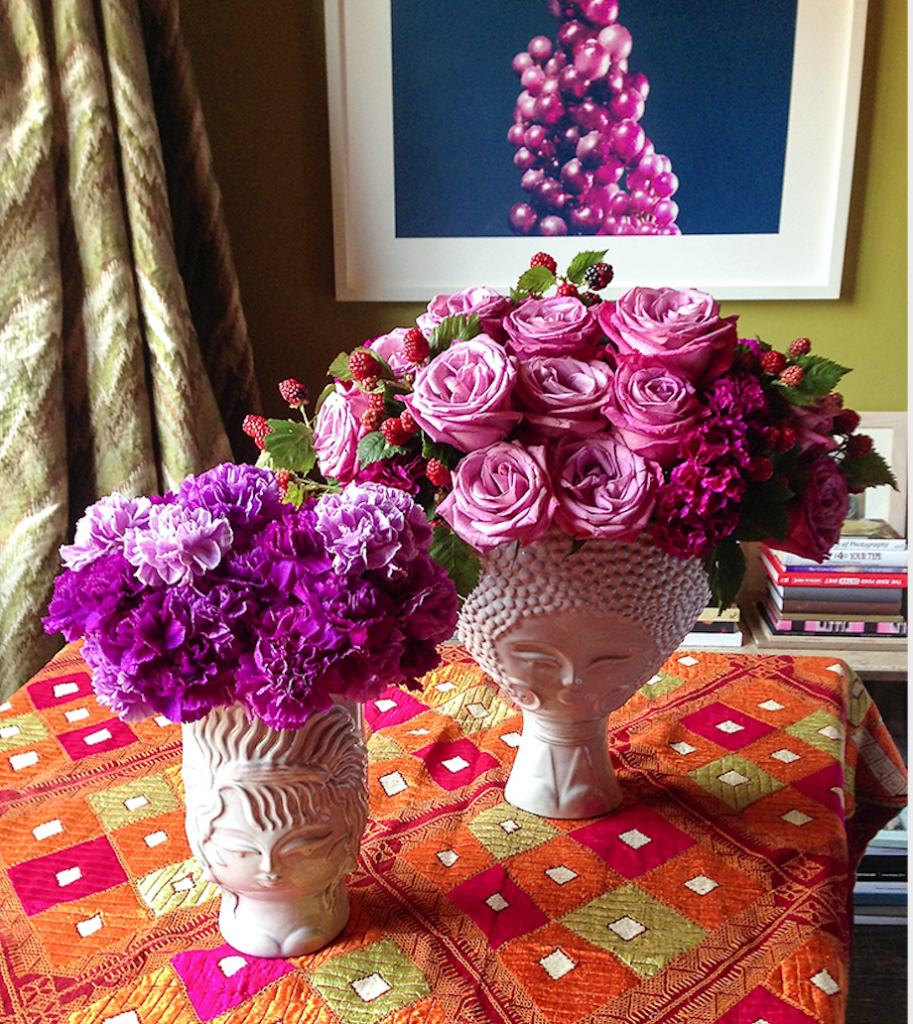 Not only does he create beautiful installations such as the one from Fleurs de Villes at Hudson Yards, but even uber-fashionistas like Chanel and Zaha Hadid have called him to do their events. 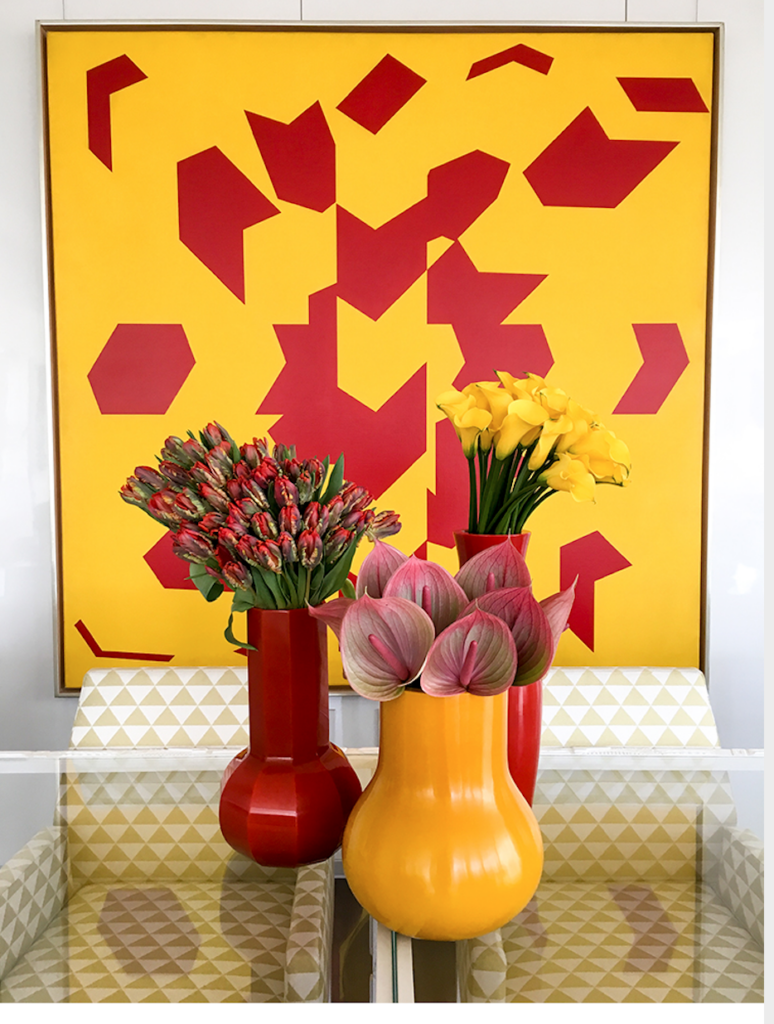 I met Oscar when I was a judge at the Fleurs de Villes event and then reconnected at the FlowerSchoolNY event where master florists interpreted paintings by the greats. Mora chose Matisse for his inspiration and also discussed how he uses greenery in many of his displays – along with pure bursts of flowers.

He also shared some key tips for all flower lovers to use in their own arrangements.

1). Use Monstera Leaves for Impact

Not only are these leaves large and fan-like, but they take up a lot of room. Easy drama immediately with even one flower. Furthermore, they are not too expensive.  It does better in tall vases. “Another favorite greenery is camellia leaves.”  Plus they have a glossy finish. 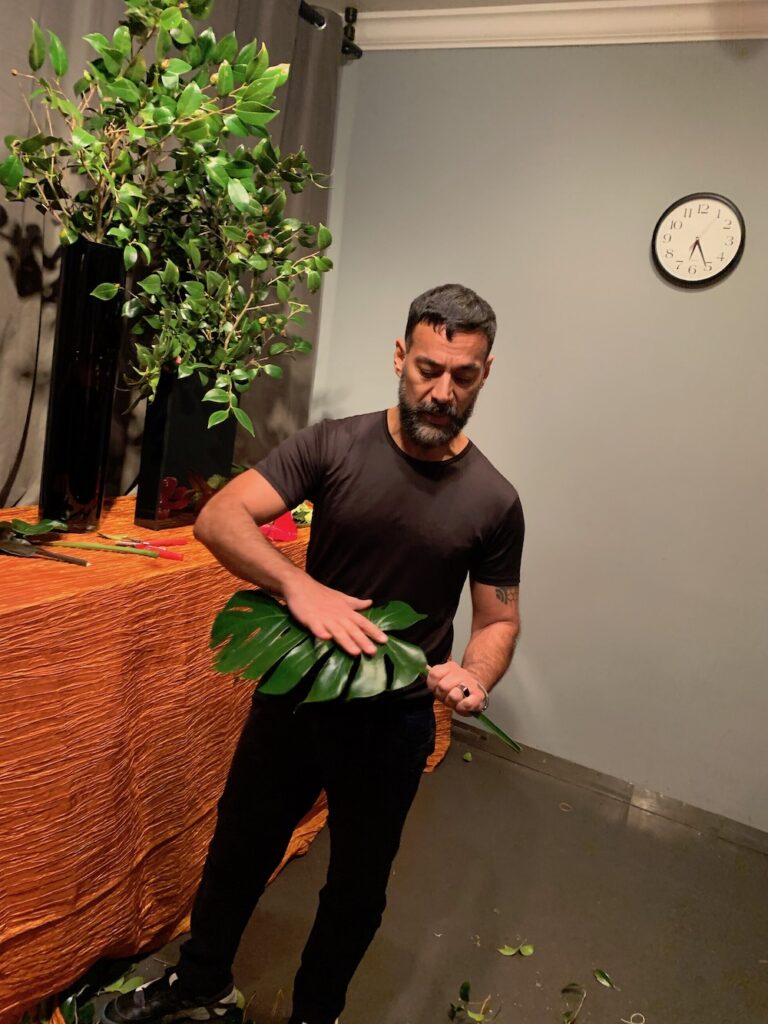 By just rubbing them lightly with a towel, the leaves will shine and be a great showcase for the flowers you put next to them. It’s not for a eucalyptus which has a matte finish. Look for the greens that have a natural shine to the leaf and then enhance it with this easy technique.

3) Greens Are Not Just Green

In the same way you build a vocabulary for flowers, learn about the greenery. An aspidistra is a beautiful purple leaf and complements so many other flowers. Every leaf should have its separate space. “My favorite greenery is camellia leaves.”  Plus they have a glossy finish.

You can do this with a knife or just literally smash bottom. Also cut them at a diagonal for better water absorption. Thin is better with flower stems in vases.

Start with your biggest leaves and create the arrangement in “descendent order.”  Be playful. Have fun. It’s not only greens you can use but branches too – whether it’s cherry blossoms, lilacs or quince.

Shaving your flowers and leaves at the bottom with a knife creates more space within the vase. It gives you more creative opportunities and also won’t decay as quickly. No leaves in water – only above the water. In life, and with flower stems, thin is better.

7). Don’t Always Use All the Flowers You Bought

Look for an airiness in your design. Step back to assess how all the blooms and greenery coalesce. “Don’t add them just because you bought them,” says Oscar. “Use leftovers for another arrangement.” 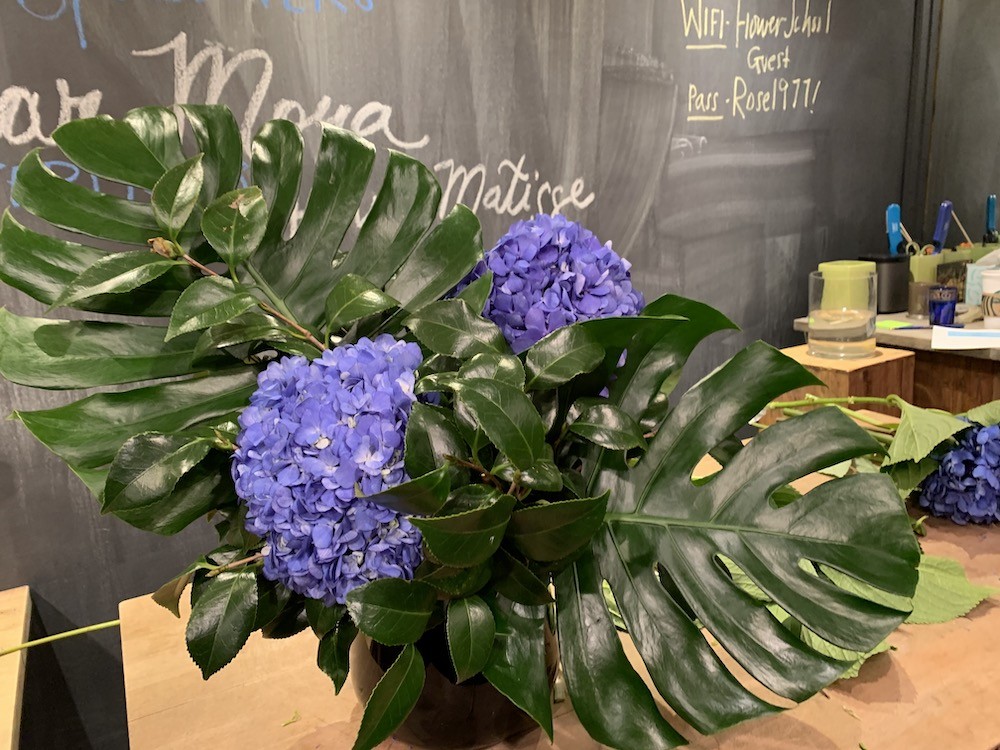 8)  Use Modern Shaped Vases and Use Tape to Create Holes

It’s a way to have a modern touch effectively. Also only put 3/4 of the water in these vases – easier to transport. If you use a vase that is on a console table – remember to focus just on the front. Think about where the vase will live and create your arrangement around that practicality. “I like black vases because it adds modern touches.” 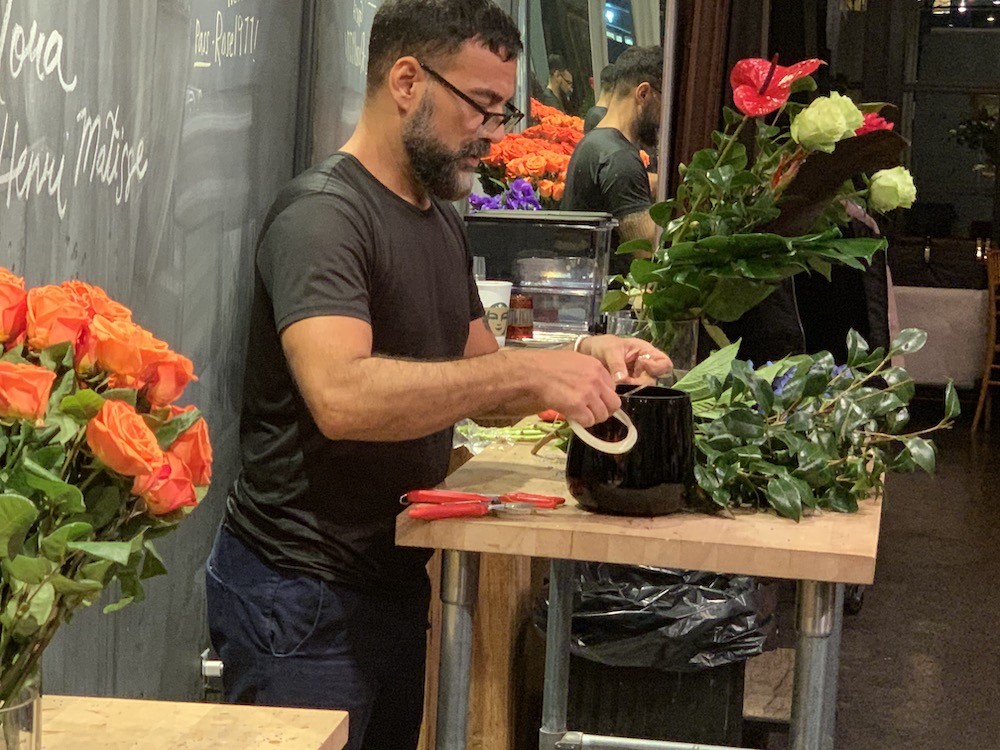 Also, take tape and literally put three lines on one side – and then the other. It makes it easier to place stems and flowers. 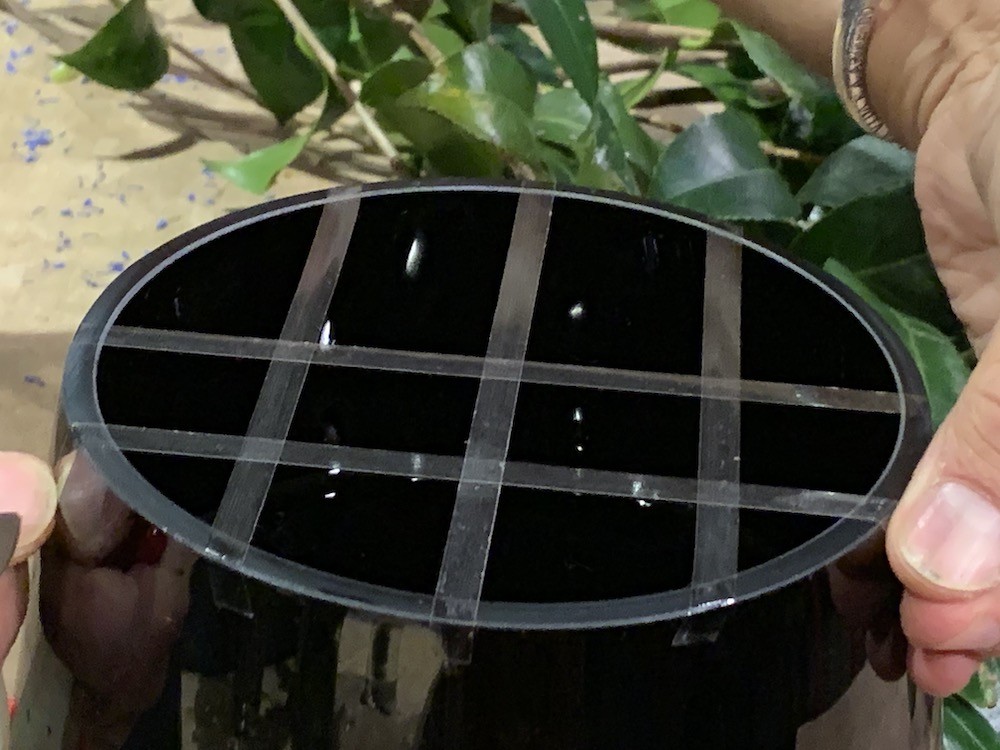 In fact, Mora showed how vases with an abundance of greenery could be transformed with just a few blooms. One flower he loves to use is the bird of paradise. Not only for its shape but its color injections to the neighboring greenery. Orchids are also a favorite. He recommends buying little tubes so the orchids and be placed without being stuffed into the greenery. Anthuriums and lilies also intrigue. Thus they are accents that twinkle and delight. 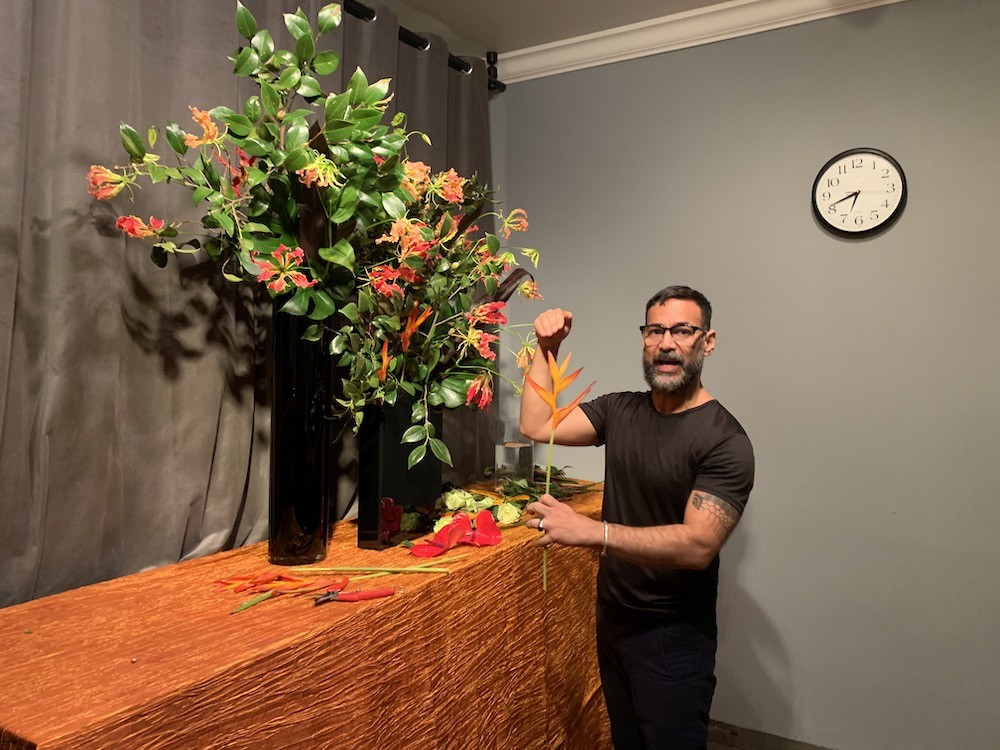 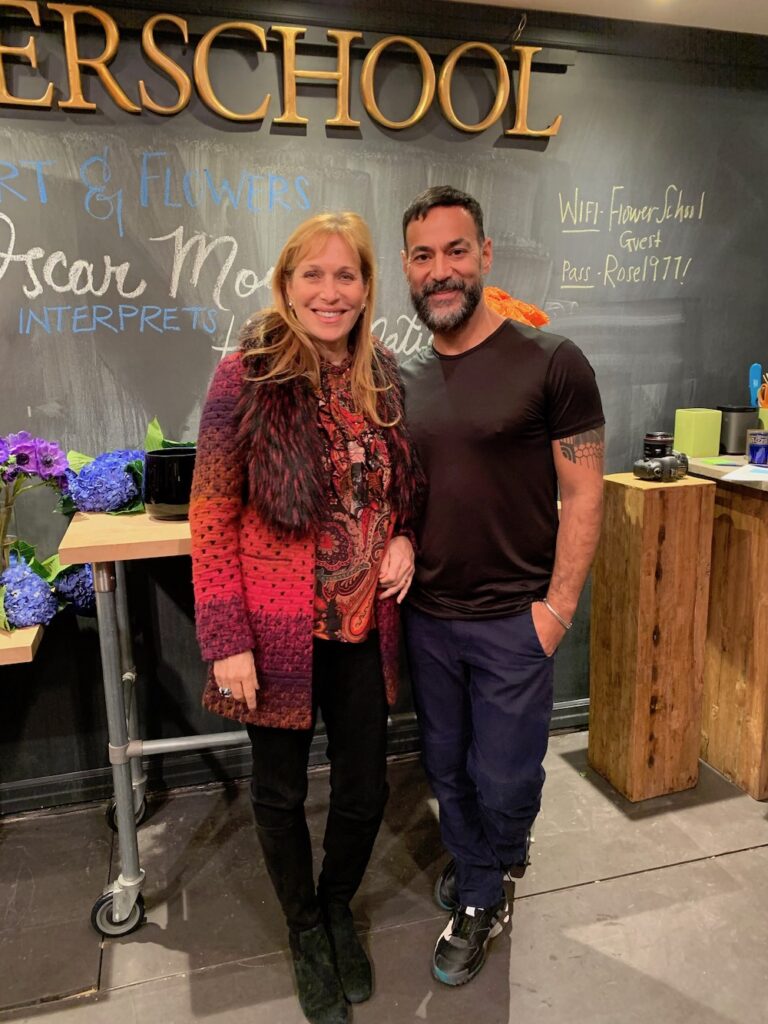