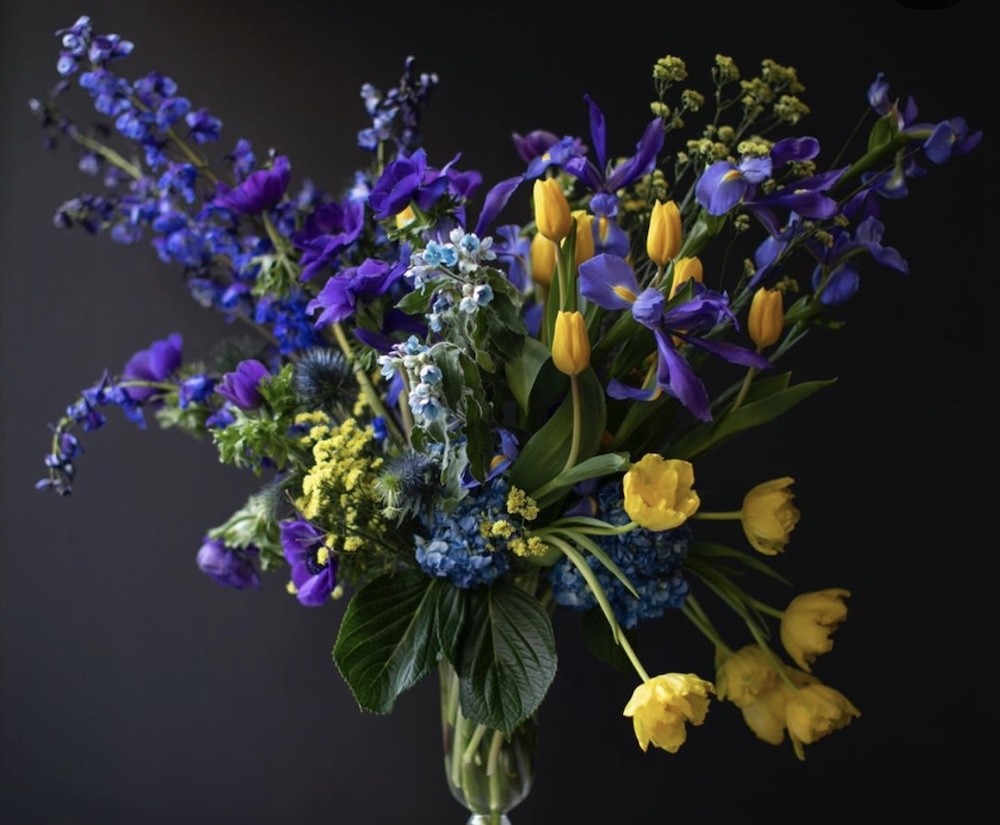 Flower Power Daily visited the first of three New York events where a master florist will interpret a great painter’s work. After all, florists are artists who instead of paint pigment use nature and flowers to create memorable artistic designs. 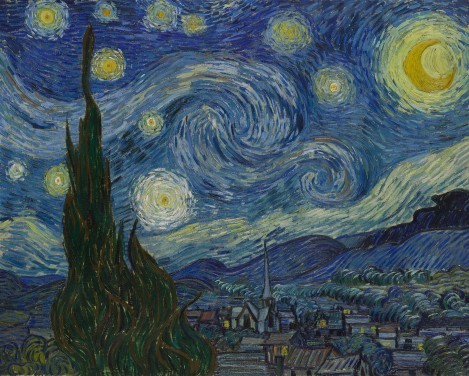 Since irony and beauty are the yin yang of Remco’s nature, Van Gogh wasn’t much of a surprise. Both Remco and Vincent van Gogh are masters in their chosen fields, both are Dutch-born and for an added twist, “Starry Night” is housed at the Museum of Modern Art.

Another similarity? Van Gogh once said, “Normality is a paved road: It’s comfortable to walk, but no flowers grow on it.” Remco is a man who is not afraid of creative risks. In fact, that challenge excites him.

Among those who came to learn from Remco included a woman whose husband had given her a birthday gift, a mother and daughter seeking an adventure together and girls who just wanted to “have fun.”

First, he showed a slide show of some of his iconic creations for the Metropolitan Museum and other big gala events and then dissected the details that enable any occasion to hum with charm and glamour.

Then he segued into his rumination about Vincent Van Gogh and how color palettes must reflect light and dark in interesting ways.

The color palette for the evening was blue and yellow – and included a generous assortment of  giant delphiniums, mustard-colored farrow, lemon tulips, lush blue thistle, purple anemones and long stalks of iris blooms.

The master florist designed his own creation explaining his choices – including the unexpected. Then the assembled floral lovers produced their own arrangement with his tutelage. 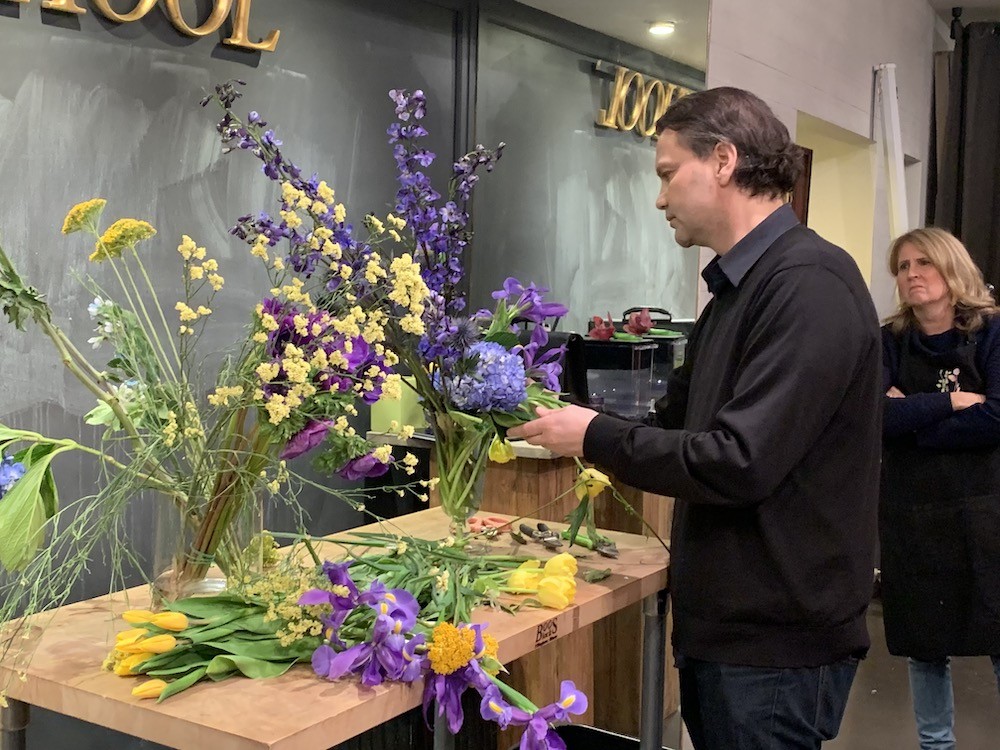 “You didn’t clean the tulips there – they’re taking up too much space,” he said, motioning the faux pas to one student. Upon fixing the problem, the arrangement improved. “Ah, try to use a tulip here,” he said to another, immediately transforming the visual effect. “Very good,” he said to another, who made a sloping wave with her flowers.

The end result was students creating memorable arrangements which they all took home, along with the experience of working with a master craftsman. 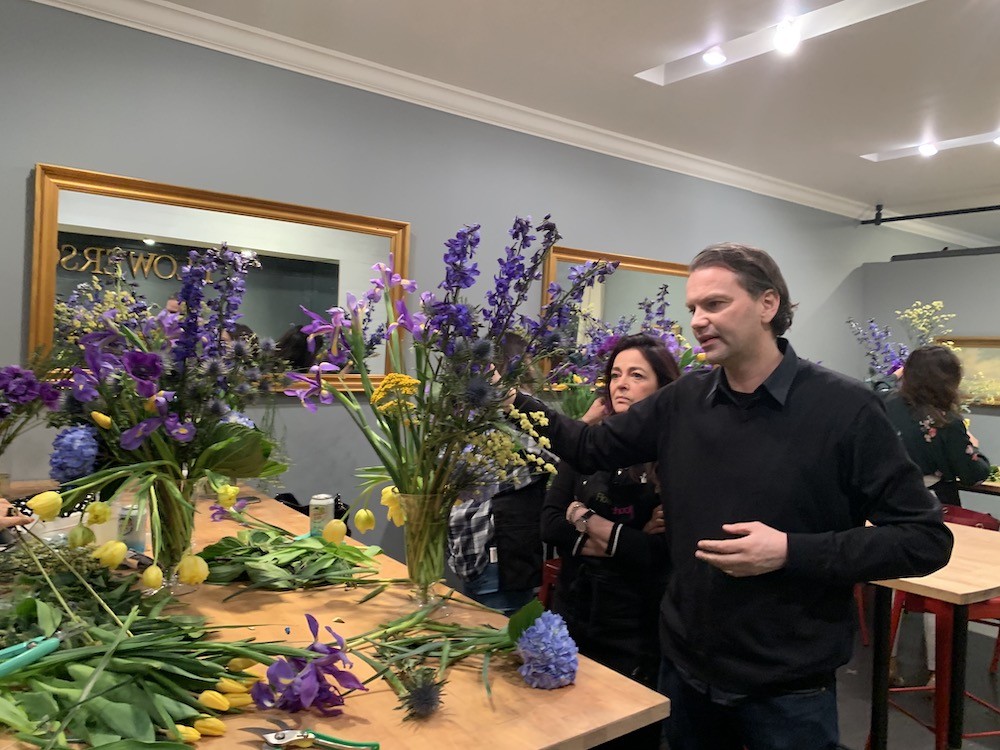 For an event for those suffering from food allergies, he had to worry about how flowers could impact people. “Luckily no one is allergic to hydrangeas,” he informed. Using the hydrangeas, he then put tinted fruit and copper-hued leaves to create his brand of magic.

Demonstrating how one puts the flower in between the forefinger and thumb, he showed how stems can easily be cut without pushing or pulling the stem to break off. “Hook the stem in between your thumb and finger,” he showed, promising experience will make this a simple task. Snap. The bloom in his hands dutifully obeyed. 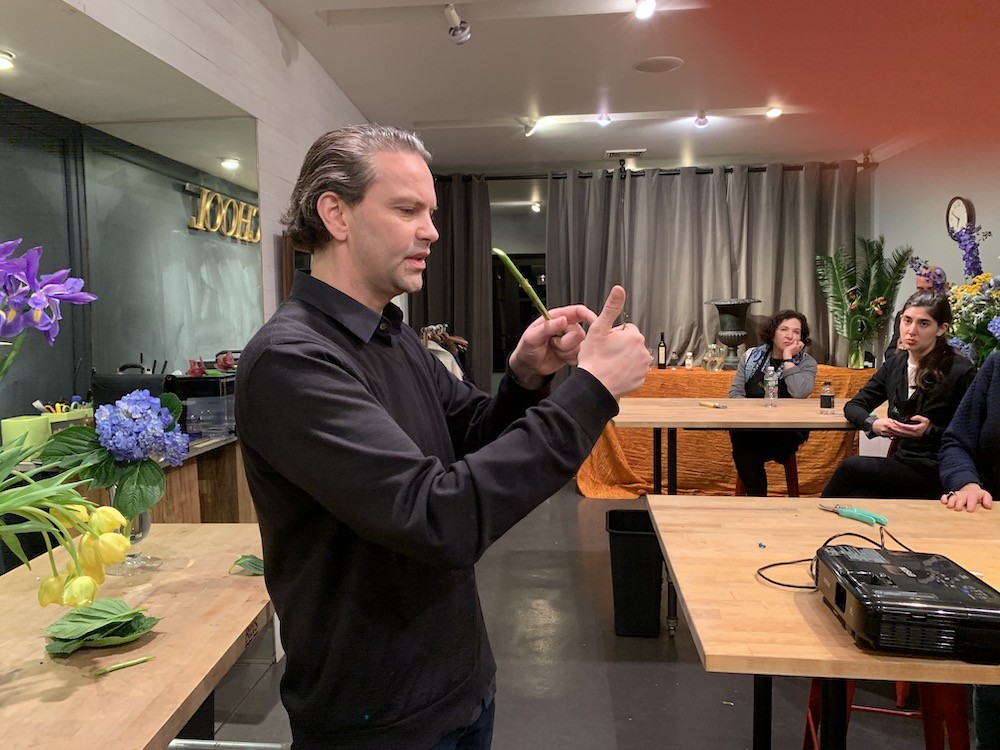 Another pet peeve?  Don’t drop your knife carelessly on a table. Be precise.  “If I see my assistants drop a knife on the table with the blade up, I’m not happy,” he said. Instead, place the cutting knife with the blade facing down so the blade never is upright.

Last but not least – “shave the legs of the tulips” and other smaller blooms before putting into a vase. Leaves should never be in the water. Also, tulips and daffodils don’t have to be cut on a 45-degree angle to absorb water as other heartier stalks.

Start a Display with the Largest Stems First

“I like large flowers,” he says. “Your floral arrangement can be all sizes of flowers but start with the largest items first.” This way you have an idea of what the frame of the arrangement will be and then can add the flourishes.

Balance your floral arrangement with lighter colors in between sections to create more harmony.

Don’t be afraid to have darker blooms en masse in one corner, says Remco. Just find the balance for your artistic expression. In his display, the blue flowers were high on the left contrasted by a waterfall of yellow tulips falling over the other side. By putting one higher flower near the tulips, a balance was achieved. 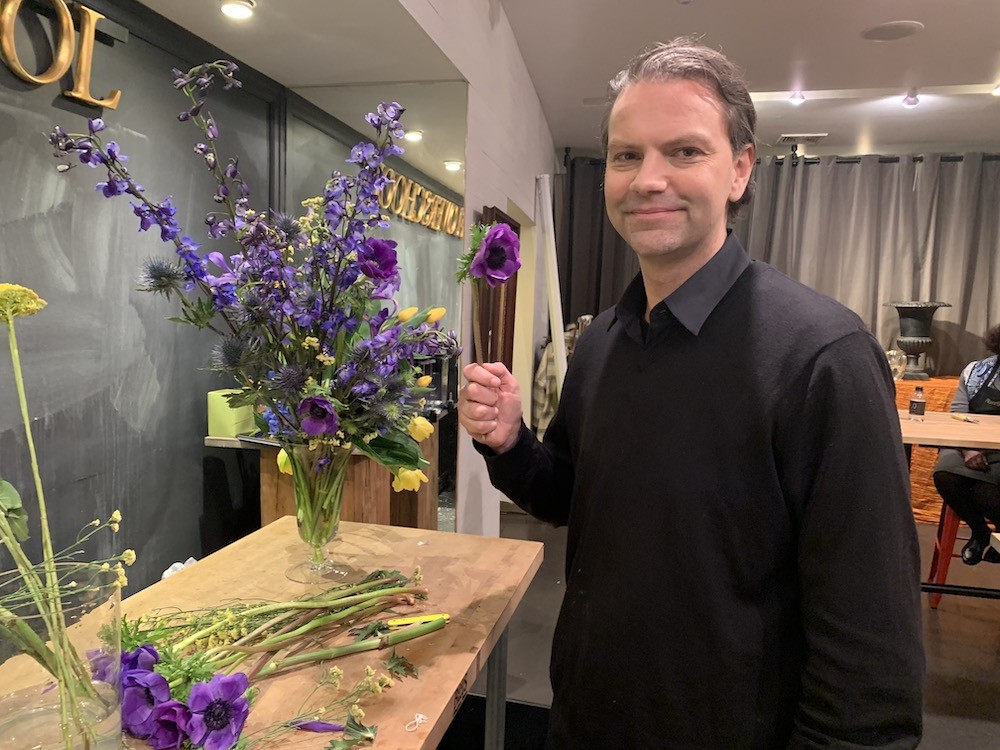 “Nature turns one way with the majority of flowers,” he says. “Analyze what direction the flower is turning and then you know where it belongs.” Demonstrating how each flower veered ever so slightly in one direction, he then put them in the vase.

“Anenomes and tulips have weaker stems and can break,” he says. “Don’t push.” Instead, he used one hand to push away neighboring flowers as though it was a curtain opening and then delicately placed the shaved flower stem into the vase with ease.

He also advised never to get tulips the day before an event. Better to get that day unlike other flowers for best results. Another word of wisdom?  Tulips will lean towards the sunlight. Prepare for that in your arrangement. 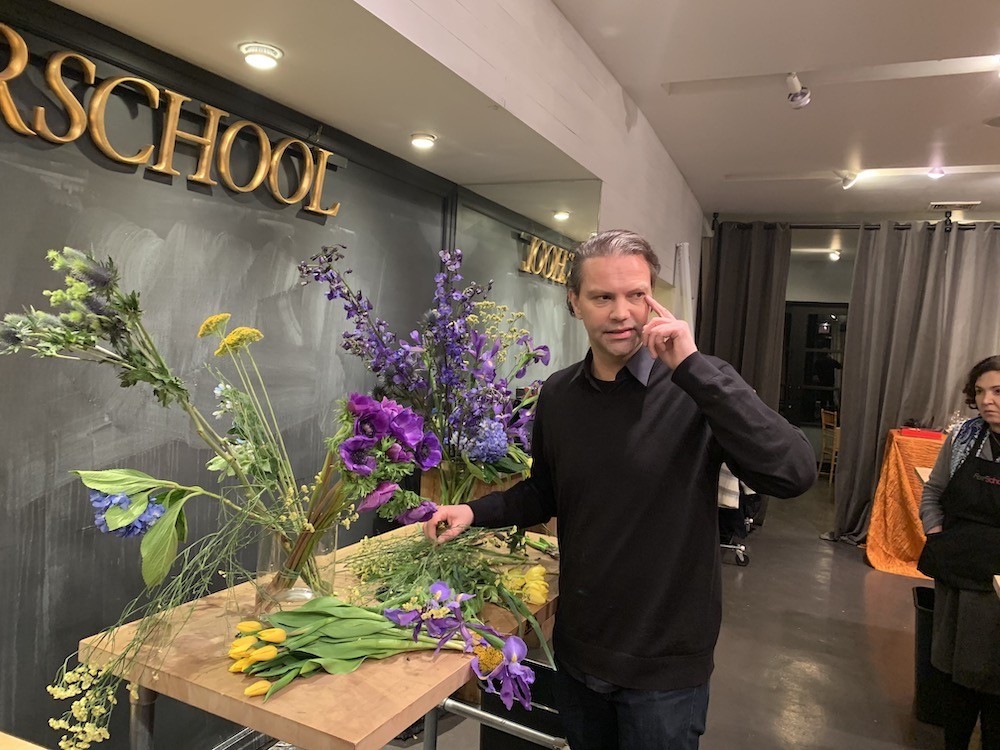 Be Decisive. No Regrets.

“Squint your eyes to really see the flowers,” he said, exhibiting his technique. Analyze the arrangement. Is it balanced? Does it please you? Experience the magic of the arrangement and feel its integrity and purpose. This will guide you he said to make the right choice.

Speaking of choices and floral news, Flower School NY is also offering a trip to Holland with Remco van Vliet along with Clary from April 14th to 19th. This tour will include behind the scenes farm tours, museum tours, tutorials and cruises along the canals.

For those who are in New York, the next upcoming “Winter 2020 Art & Master Class Series” will be Tuesday, January 28th with Victoria Aha of Designs by Aha interpreting Claude Monet and on Tuesday, February 4th with Oscar Mora interpreting Henri Matisse.