The History and Floral Meaning of the Easter Lily 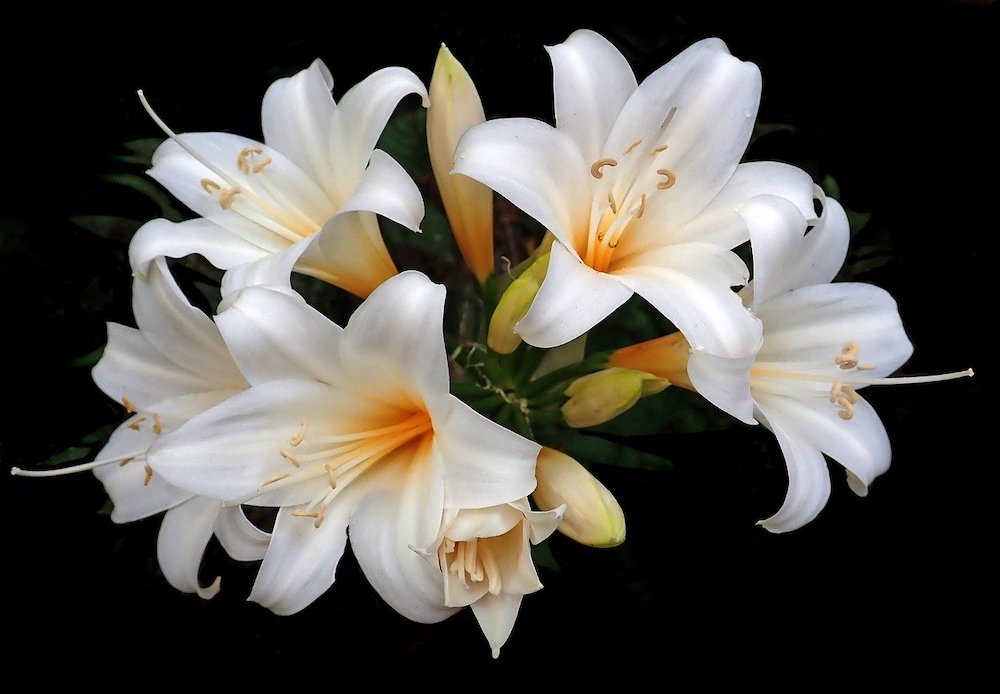 In celebration of Good Friday and Easter, here are some fun facts about the Easter Lily which is the flower associated with this holiday.

SPIRITUAL HISTORY OF THE LILY

Known as the “white-robed apostles of hope,” fragrant white lilies were believed to symbolize the purity of Christ.

Turns out that in art dating back to the 14th century, the Archangel Gabriel is often depicted giving the Virgin Mary a lily when telling her that she would conceive a son by the power of the Holy Spirit. Thus the flower became associated with rebirth as well as a symbol of loss which is why the lily is used in funerals to connect the departed to God.

So we have ancient artists like Leonardo da Vinci to thank for this becoming part of our current traditions.

Furthermore, according to Marian T. Horvat, Ph.D., as early as the 7th century, the Venerable Bede likened the Virgin Mary to a white lily.

He noted that the white petals symbolized her pure virginal body and the golden anthers, the radiance of her soul. Lovely thought, isn’t it?

The trumpet shape of the Easter lily also fit into the image of a trumpet sounding the message that Jesus had risen and thus loss becomes a form of rebirth too.

Others noted that since lilies start as ugly bulbs that live underground for at least three years and then bloom into these fragrant flowers, this is a metaphor for transformation. Jesus died a brutal death but then had a holy resurrection which has been the root of Christian faith.

Adding another layer to the lily’s significance was how the scholars of St. Bernard’s time also pointed out how the name Nazareth in Hebrew signifies a flower. 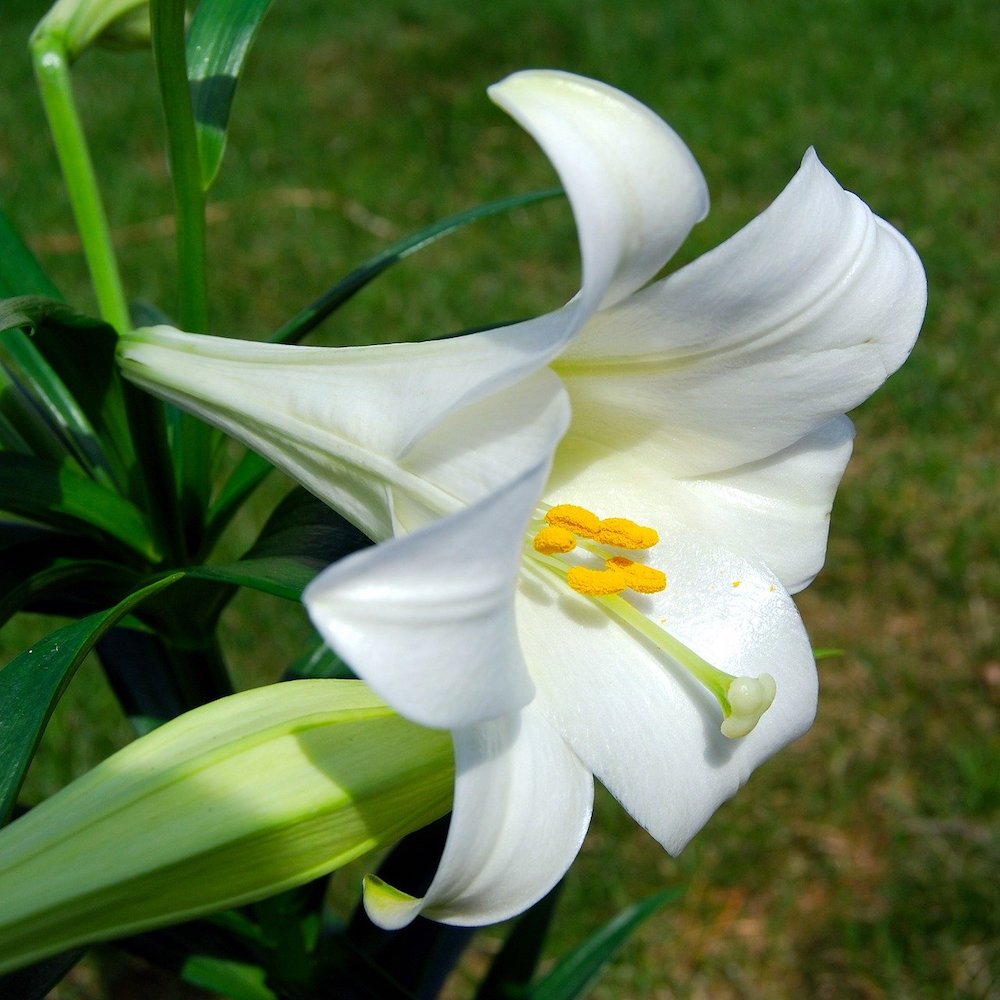 “Beautiful legends emerged to explain the origin of the flower,” says Horvat. “It was told that the lily sprang from the tears of Eve, when she was expelled from the Garden of Eden. But it was yellow until the day that the Virgin Mary stooped to pick it, thus symbolizing the role of the New Eve in restoring to the world the innocence lost by Eve.”

We particularly appreciate how this flower represents women as well as Christ.

And speaking of Christ, even in the Bible, it is said that he had a particular fondness for this flower.

In Matthew 6:25-29, Jesus says, “Be not anxious for your life, what ye shall eat, or what ye shall drink; nor yet for your body, what ye shall put on. Is not the life more than the food, and the body than the raiment? Behold the birds of the heaven, that they sow not, neither do they reap, nor gather into barns; and your heavenly Father feedeth them.

“Consider the lilies of the field, how they grow; they toil not, neither do they spin: yet I say unto you, that even Solomon in all his glory was not arrayed like one of these.”

So today is a time to reflect on rebirths, loss and especially the beauty of the white lily.

Another interesting fact is that the Easter lily came to the United States from Japan. Just like our cherry blossoms.

Following World War I, a soldier named Louis Houghton brought a suitcase of lily bulbs from Japan back to the U.S., specifically to his home state of Oregon. Houghton gave the lily bulbs to his horticultural friends, and soon enough, the area along the California-Oregon border, which happened to have prime growing conditions for the flowers, became known as the Easter Lily Capital of the World.

After Pearl Harbor, Japanese shipments were no longer welcome which created more demand for Easter lilies from Oregon and especially California growers.  And just like Detroit became known for cars, soon Smith River, California, home to less than 900 residents, produced 95% of the world’s Easter lily bulbs.

Also, the Greek Orthodox use these flowers but celebrate Easter a week later or sometimes a few weeks later. For 2020, it will be April 19th.

And once you buy a beautiful lily, here are ways to take care of it. 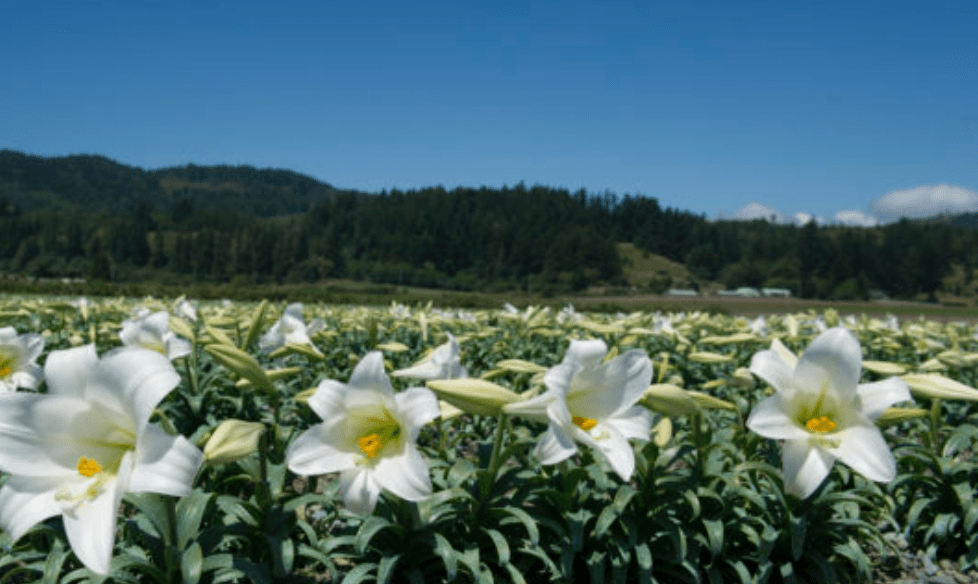 HOW TO CARE FOR YOUR EASTER LILY

If your Easter lily comes wrapped in foil, remove it since the plant can become waterlogged on the bottom.

Easter lilies require a medium moisture level and should never stand in water for a long time.

Remove the yellow anthers from the center to prolong the life of the white flowers.

They like bright areas indoors with natural light but not too much exposure to sun.

Don’t let your cats near them. Easter lilies are toxic to cats.

Lilies are perennials. So yes, you can plant them outdoors once the blossoms wither.

Plant them in a sunny spot with well-drained soil at the same depth as they were in their vase or container. Many say to spread several inches of mulch then around the base of the flowers.

Keep the soil moist during winter so the bulbs are happy.

Do not plant them around other types of lilies. Because a virus could occur.

Easter lilies are in a class of their own. 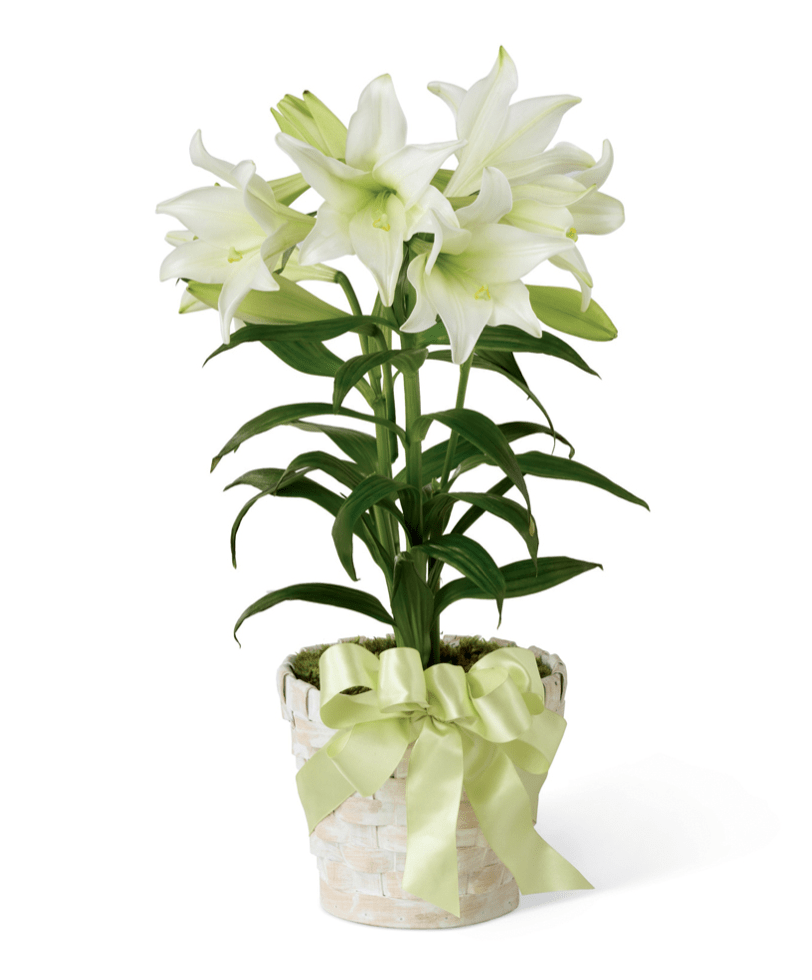