Flowers for the Funeral Bier, Greek Orthodox Friday and Easter 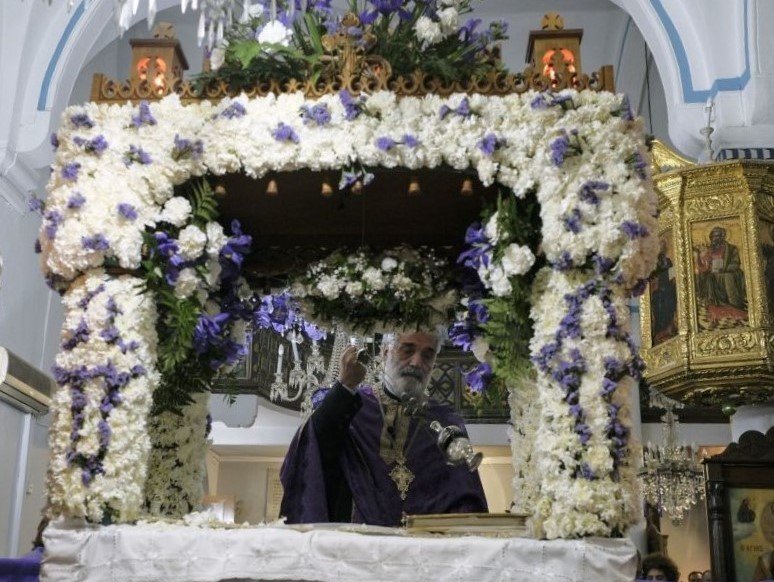 Because it takes place inside an Orthodox church, most people don’t know about the custom of decorating a “tomb” with flowers for Orthodox Good Friday, April 26. The tomb holds a symbolic representation of Christ after the crucifixion. 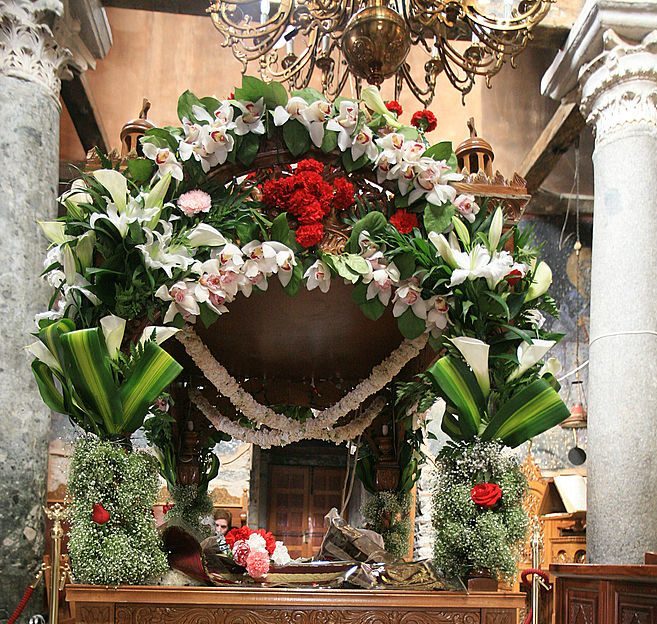 Growing up in the Midwest, I thought it was “Monday Thursday,” but “Maundy” comes from “mandamus,” instructions given during the Last Supper, which was, of course a Seder.

Working backward from Easter Sunday, the “third day Christ rose from the dead,” we have Saturday, the day he was in the tomb, Friday, when he was crucified, and Thursday, the day of the Last Supper. These are the holiest days of the Christian calendar; in the Orthodox church they are acted out in a kind of pantomime. 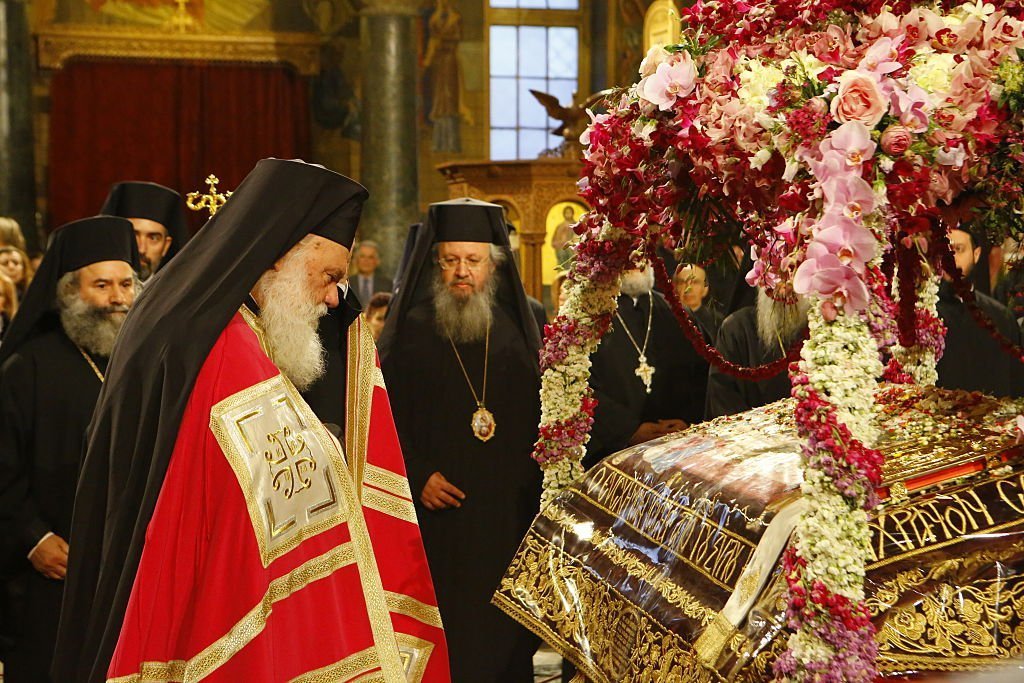 Forget giving up candy. It’s no meat or products from animals, which means no dairy. No fish with backbones. Little oil or wine. The fast makes a virtue of the starvation of winter in agrarian societies when a rutabaga dragged through boiling water was supper.

Maundy Thursday therefore was a treat. It allowed a little wine, some oil and a meal. Christ had not yet been crucified. Cause for celebration. The flowers left after this meal become the flowers for the Kouvouklion, or carved wooden tomb, something the congreation kept for this one day of the year. 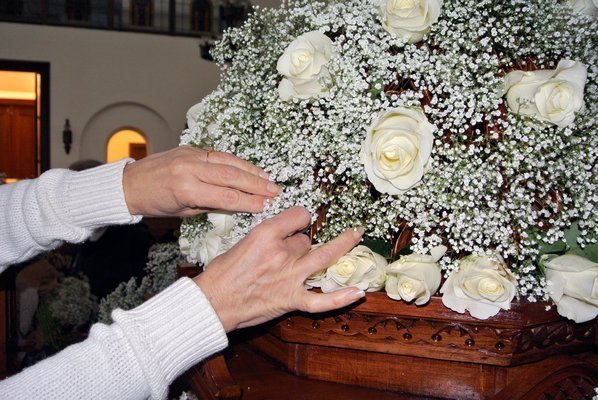 In western Christian churches it is Easter lilies, the fragrant white trumpet lily that originated in Japan, that are forced to bloom in time for Easter. Ninety percent of the world’s Easter lilies, which normally bloom in June and July, are grown on the South Oregon Coast, near Brookings, Oregon. But there is no single flower association with Eastern Orthodox Easter. 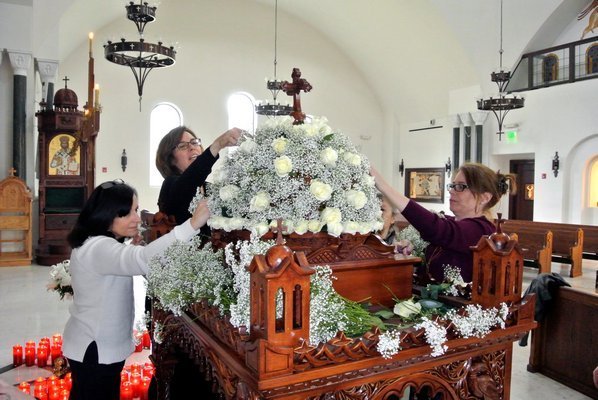 Depending on where Easter falls, and where a synod might be located, what the budget and attitude of the church might be, the decorating of the tomb could range from wildflowers for small churches in Cyprus, willow branches in Ukraine, to weaving carnations and roses into a mesh in Long Island to hiring florists for piles of orchids. 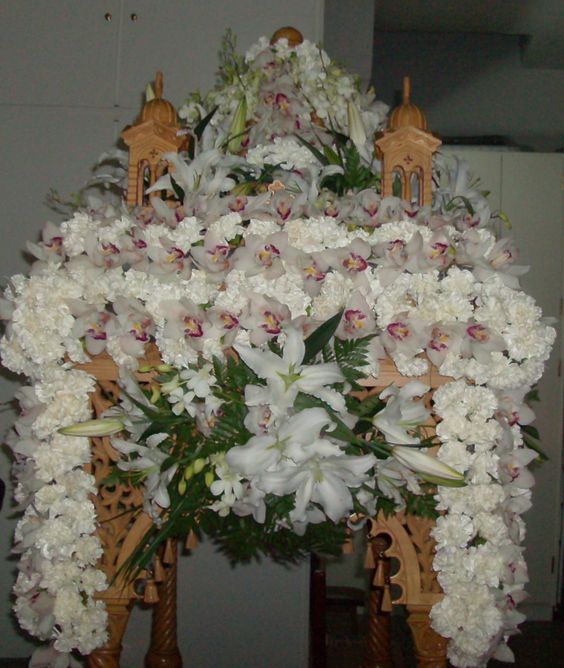 In Greece itself, there is a tradition of blue-and-white flowers, the national colors. Some places like a dash of royal purple. White is always the underlying color. It is undeniable that the larger churches compete for the best Kouvouklion.

On Great Friday the mood inside the church changes from the night before. All of the paintings, icons and statues are shrouded in black. The epitaphios, a representation of Christ’s body, whether it is a cloth, a carving, or an icon, is reverently placed inside the Kouvouklion, anointed with rose water and flower petals, and after a day of readings and solemn hymns, the bier is carried outside the church in a solemn, candle-lit funeral procession. 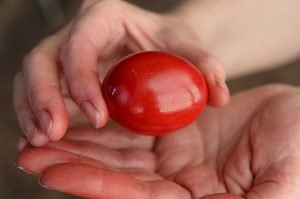 The next time the Kouvouklion will be seen, after the candles have been extinguished to symbolize the death of Christ on Saturday evening, will be at the stroke of midnight, when the first candles will be lit from the central candle on the altar.

Light will spread from candle to candle, and the Kouvouklion will be revealed, with the epitaphios missing. The flowers on the Kouvouklion may now be a riotous mixture of colors, including red, indicating the blood of Christ.

Parishioners will leave the church in the dark and carry lit candles to their home, spreading the light and the message: Christ is risen.

The only acceptable color for Easter eggs in the Greek Orthodox church is red, achieved by using the peels of yellow onions. Red is the color of Eastern Orthodox Easter.

And thus begins Whitsun, a joyous 50-day period, modeled on Shavuot, the harvest period of Judaism, the happiest time of the Christian calendar.

More immediately, there will be a prodigious Easter feast. Bring on the wine and the roasted lamb.