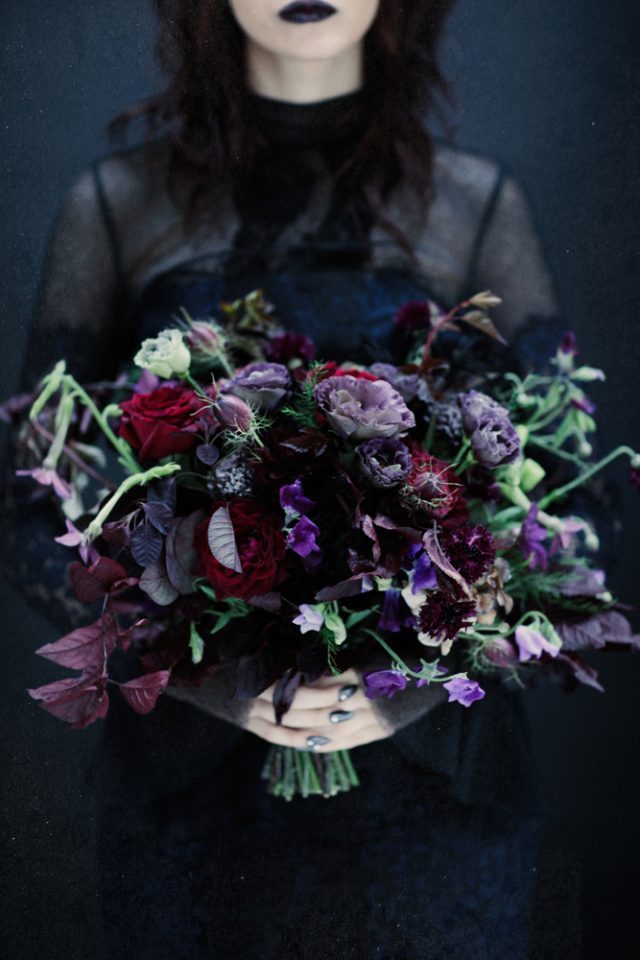 It’s World Goth Day and what that means is it’s a day “where goth gets to celebrate its own being and an opportunity to make its presence known to the rest of the world.”

However, flowers have always had their own special group where the dark side of things is appreciated and valued.

There are over 3000 flowers with very dark petals – that appear black – but like skin tones – have many shades. Many black flowers are in fact deep purple.

But as any Goth lover knows, looking for the nuances in dark colors is an art form – especially for those whose wardrobes are limited to a wafer-thin color palate.

Recommended: 4 Floral Fragrances That Will Whisk You Away in Your Mind

While some flowers have always naturally had very dark tones, others had to be cultivated and soaked with a focused attitude and attention.

At Motes Orchids, a premier grower in Florida, their team spent 30 years developing a black orchid.

“We will bloom out tens of thousands of individual unique plants,” explains Bartholemew Motes. “Of those, one or two will be mericlones. They are hard to breed because color is rare and reluctant to display in progeny. And to go from seed to flower takes five years.”

Then there is the black velvet petunia which was developed by breeders in 2010.

Writer and Goth goddess Jill Kargman, the star of “Odd Mom Out” is a big fan of dark shaded flowers. 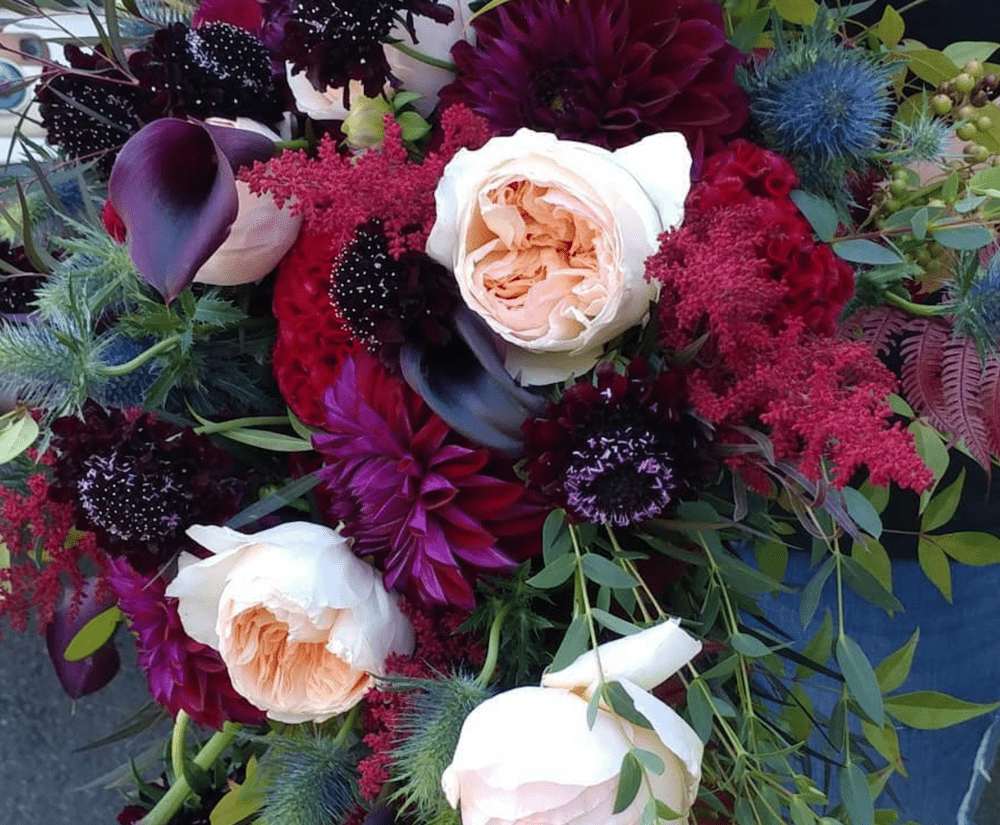 “I LOVE dark purple ranunculus,” she says. “They’re spooky but ethereal and delicate and I worship that goth juxtaposition.”

Another fan of black ranunculus is L.A. florist Jeff Leatham.

Bettie Rose Flowers in East Sussex has many options for black flowers which aren’t a surprise considering the Goth movement started in England.

However, florists around the globe are finding that more and more people are gravitating towards darker colors in their floral choices.

“They like the moody look,” says Carrie Cassidey-Struble, from the Flower Diva in Pineville, North Carolina. “We get a lot of requests for the big birthdays.”

For Carrie, a true flower diva, she loves the very dark red Dahlias that look black. Other favorites are the black Baccara rose which is more of an eggplant shade.

In Holland, a whole new industry has emerged of dying flowers black. Popular requests are for roses and especially carnations, which are very receptive to ebony pigments.

After all, we at Flower Power Daily think black is beautiful.

However, despite an affection for dark flowers, florists say they are noticing fewer requests at this moment of time.

Recommended: How to Calm Coronavirus Fears with Flowers and Common Scents

“Because of COVID, people want bright bright colors around them,” says the Flower Diva. “That’s all I’m hearing is get me more sunflowers.”

Or they will use black calla lilies or tulips to add more drama to a bouquet that is also filled with other color choices.

But for today, go dark – and get out those Catwoman or Black Widow inspired black capes, pants and eyeliner.

It’s all about having fun and being open to different perspectives to make life more interesting.

Here are some of our favorite black flowers. If you are not buying from a florist, many farms have great options to grow them yourselves. Another great source is Amazon but we like to promote mom and pop shops so try local places first who may need the business more.

7 FAB BLACK FLOWERS TO KNOW ABOUT 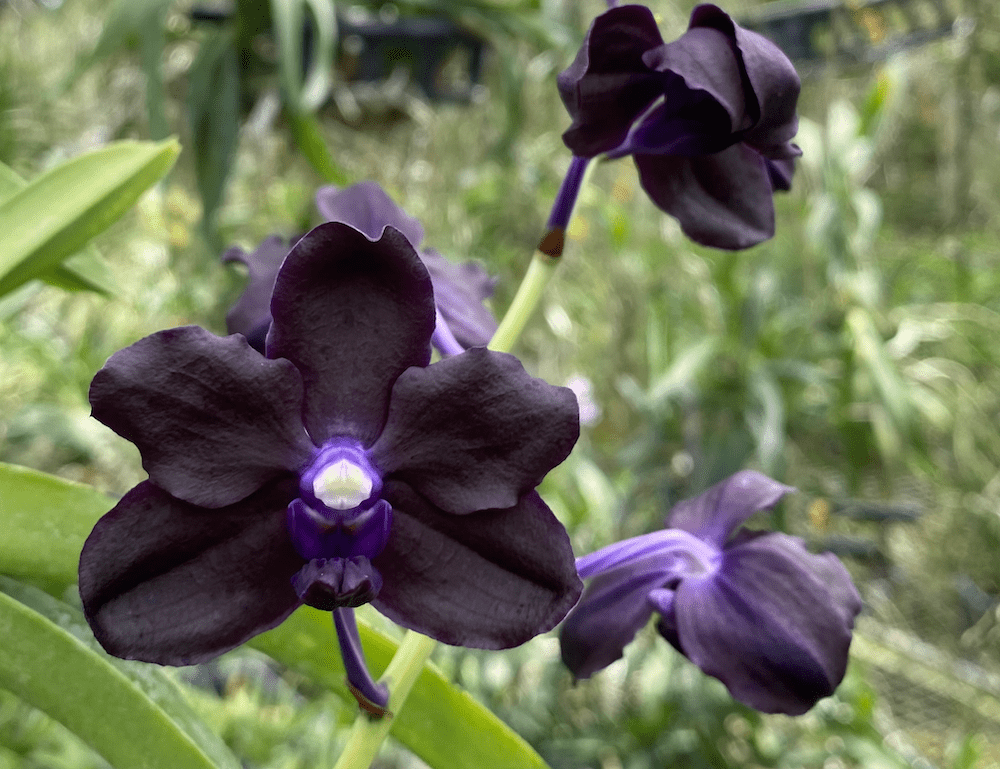 Martin Motes, the foremost authority on vanda orchids, bred this orchid. Its exact ancestry is a trade secret but its most prominent ancestor is a very special dark Vanda tessellata ‘Mary Motes’ FCC/AOS, named for his wife. Tessellata figures prominently in traditional Indian medicine. It even has an aphrodisiac compound. 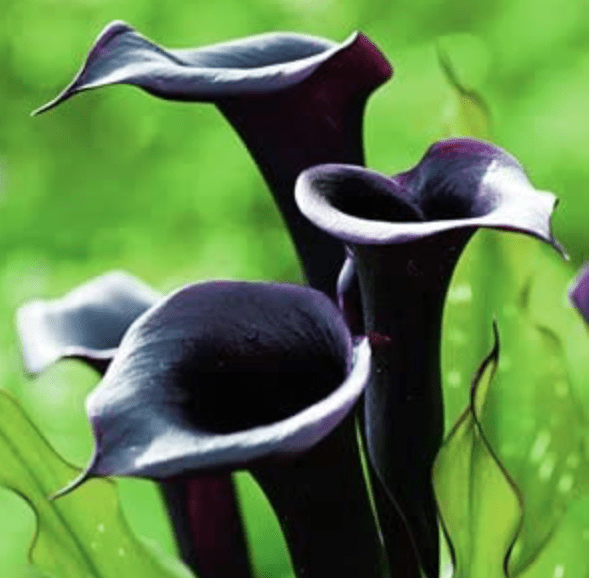 Black Forest Calla Lily has a deep purple, nearly black flower that blooms in mid-summer. Great for the Goth gardener. Holland Bulb Farms carries them as do other places including Amazon. High Country Gardens had them but only a few. They are also plentiful at florists and supermarkets.

The derivative of the word calla is the Greek word for beauty — calla. In ancient mythology, calla lilies are said to come from the ancient god Hera, the wife of Zeus. In the story, Zeus brought Hercules to nurse from his wife while she was sleeping. He wanted his son to have the strength of the gods. Hera awoke, annoyed that she was duped, and pushed the baby away from her. Drops of milk flew across the sky creating the milky way and everywhere they landed on earth, calla lilies bloomed. 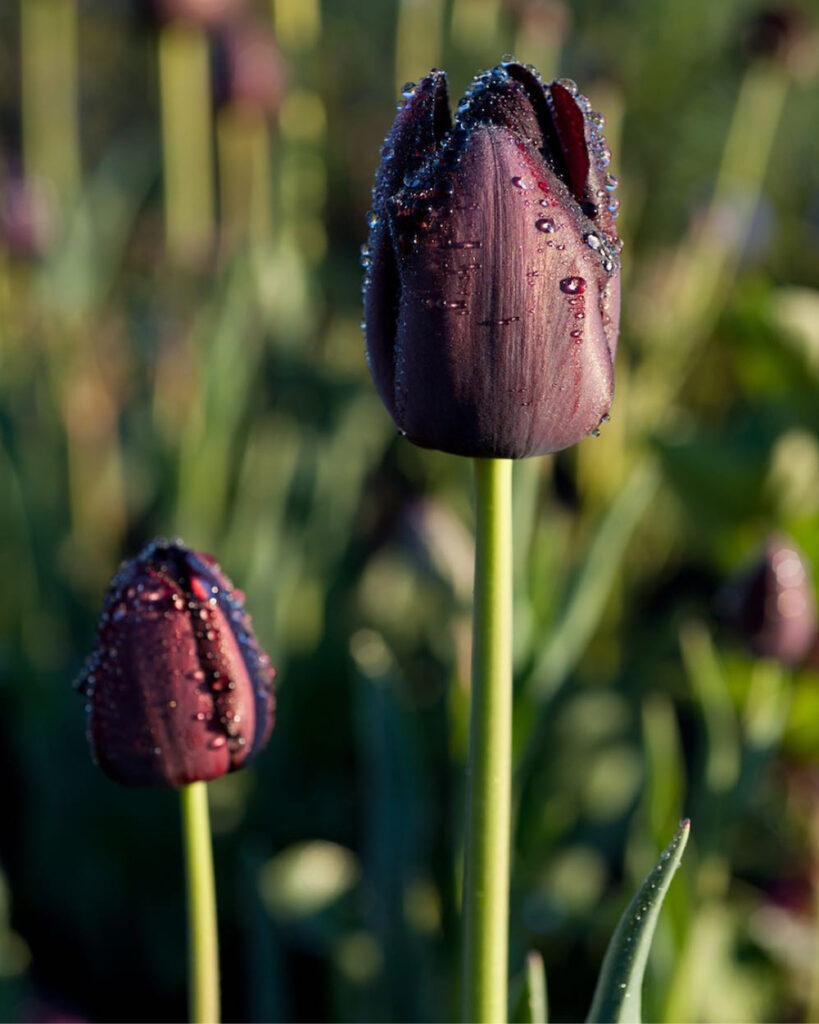 The most popular breed is called Queen of the Night. In the language of flowers, tulips represent perfect love. And for Goth followers, this breed is indeed a perfect love.  However, unlike the black calla lily, which you can find sometimes at supermarkets, this special flower is often specially ordered at a florist as well as a breeder for bulbs. Dutch Grown is a great source for these flowers. Go to your local florist if you want them for a special bouquet. 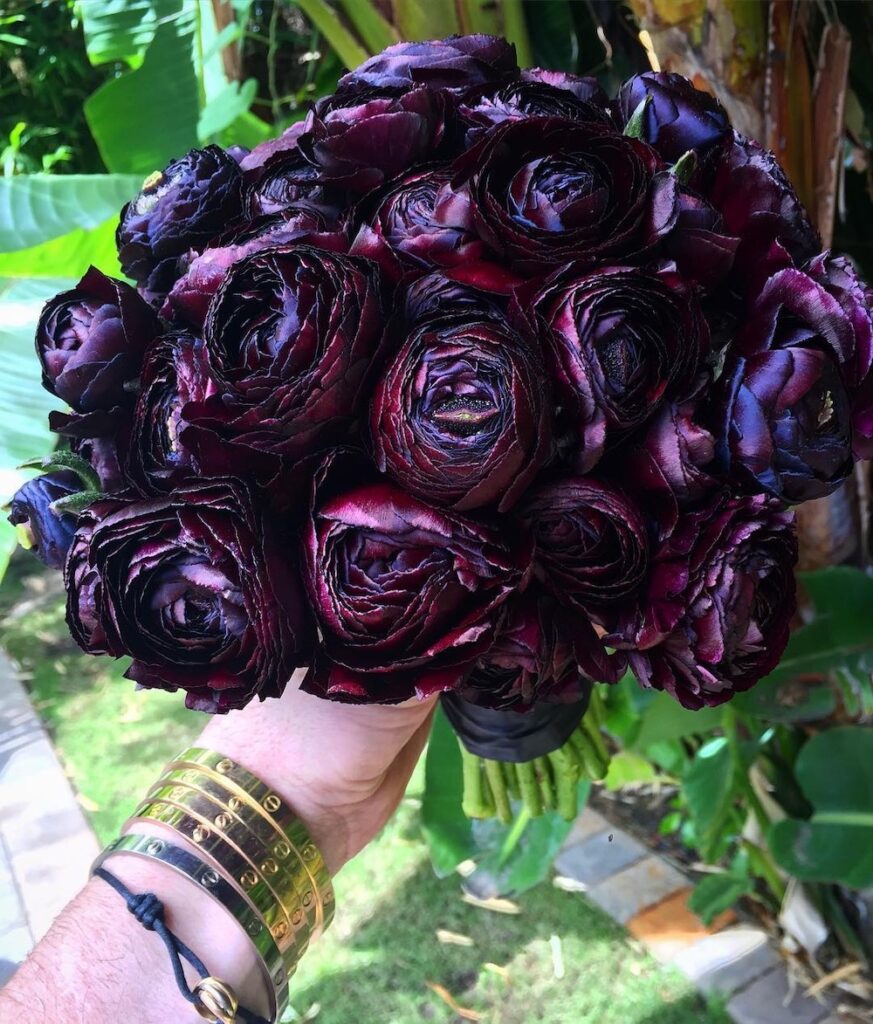 In the language of flowers, this flower represents being dazzled by one’s charms. What we love about this fluffy flower is that it doesn’t have to take a starring role. It always plays the character actor in a bouquet but stands proud of its beauty and delicacy. It is an ideal companion to more showy flowers such as roses and tulips. 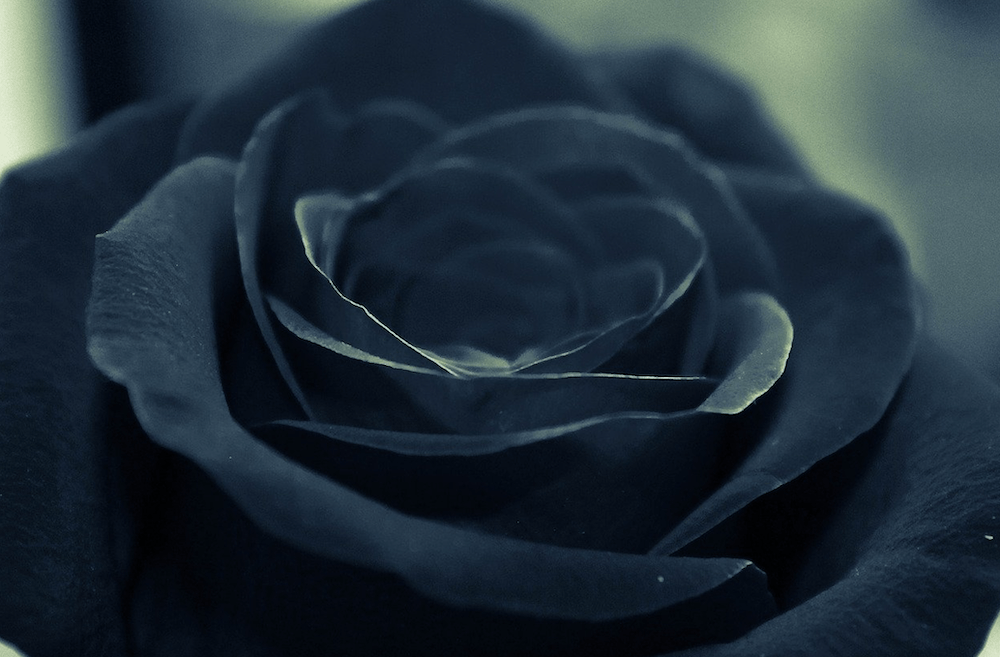 Despite some myths, black roses are not associated with death. In fact, they are mysterious and beautiful. Yes, there is a sadness in how people interpret them in the language of flowers but that may come from sensitivity and vulnerability which should be embraced. Breeders recognize that a sub-group seeks them so have been creating more such as the Black Magic Rose, Black Velvet Rose, Black Baccara Rose, Black Jade Rose and Black Ice. 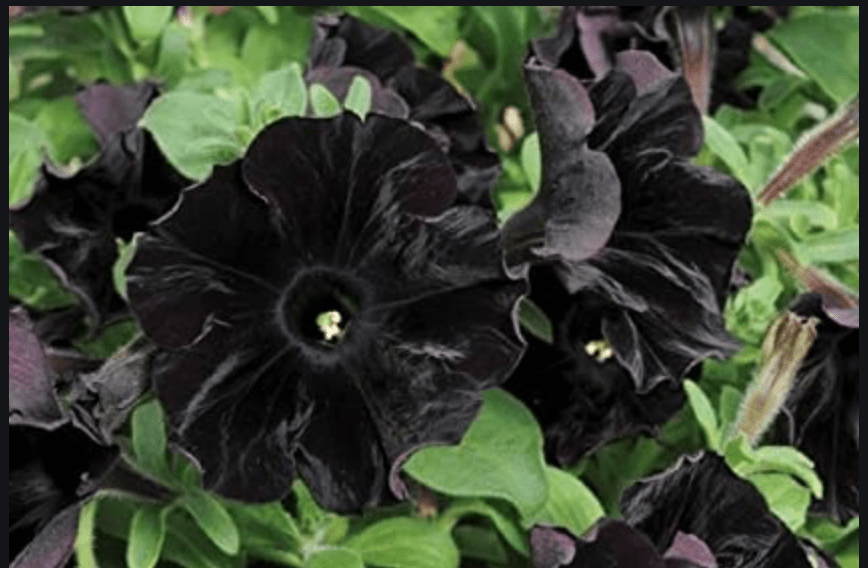 These stunners were created a decade ago and have found a robust following. Because petunias are sturdy and reliable, this color complements bright colors really well and pops in such a pleasant way. Of course, the Goth gardener may want to only create window boxes with black colors – and then could also stretch and get the black pansies too. The good news is that there are more options including from great places like Davesgarden. 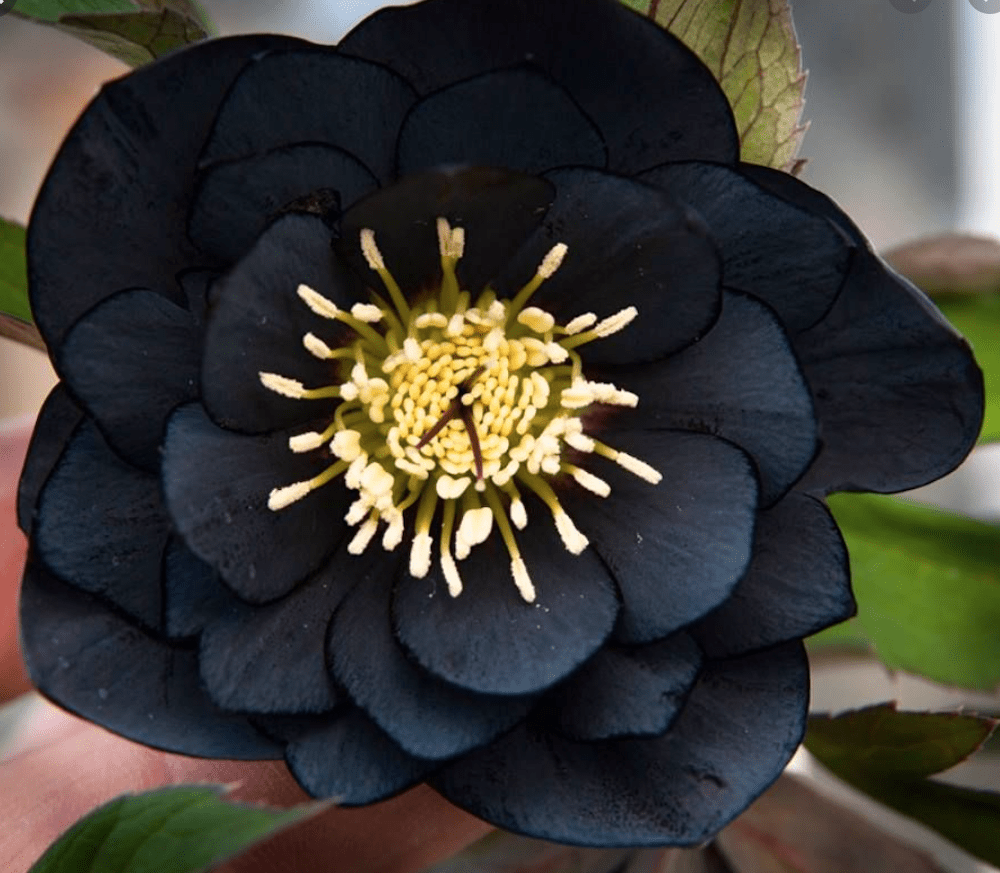 Blue Lady hellebore is an evergreen perennial flowering plant. During medieval times, hellebores were considered a way to combat against witches, evil spirits, judgmental people and madness. Of course people were mad about these plants because of its color and that it also blooms in winter when the days become darker sooner. How pitch-perfect indeed. All nurseries carry these as well for the Goth minded gardener. 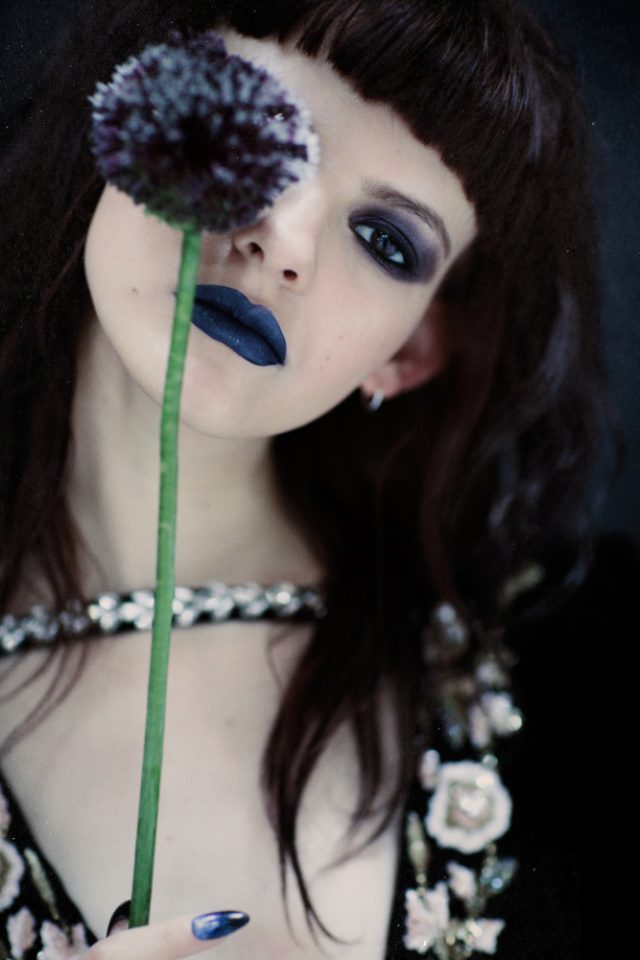