Is Buying Seeds A Big Cheat? How Many Seeds Are In A Packet? 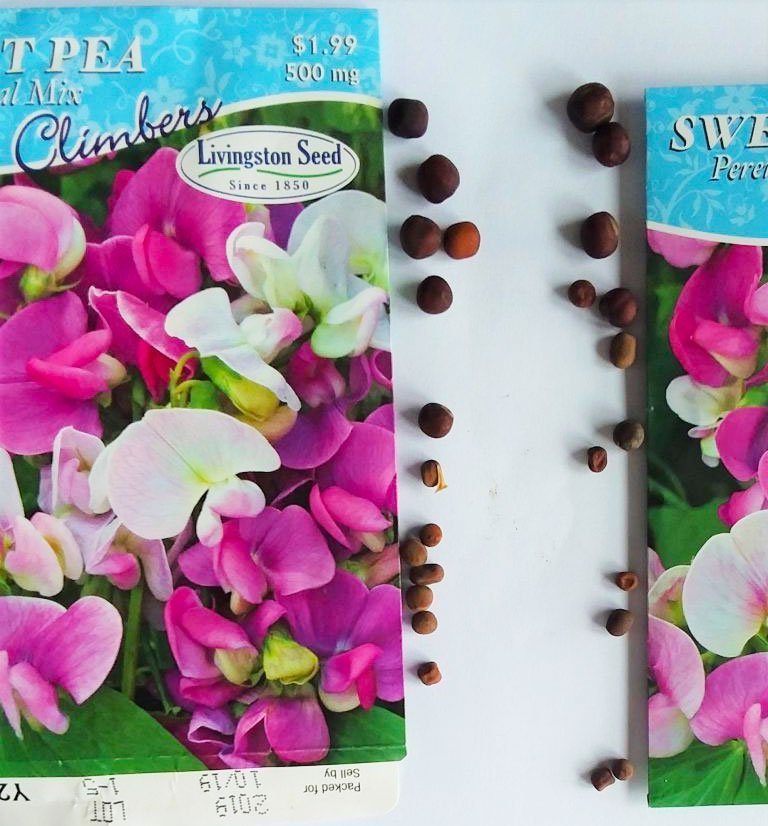 How many seeds in a seed packet? It never occurred to me to ask when I bought Sweet Peas at the local garden center, what we still call Agway. And where I had to force myself not to buy a couple of newly hatched chicks, especially the ones labeled “silly” — the French salmon-colored Faverolle chicks. I asked the woman behind the counter why they were silly and she said, “As far as I’m concerned, all chickens are silly.”

Back to Sweet Peas. These were from the Livingston Seed Company, “Since 1850,” it says on the package, “located in Norton, Massachusetts.” It was acquired by a larger company in 2014, and seems these days to be more focused on vegetables, so maybe it doesn’t care about Sweet Peas anymore. Turns out it isn’t even located in Massachusetts. It’s in Ohio. I found all that out later.

What? Not only were there only 12 seeds in each packet. (I bought two.) But half of them were so small I wasn’t even sure they would grow.

The next day I stopped at a grocery store and passed a kiosk of Burpee seeds. Curious, I bought their Sweet Dreams mix of Sweet Peas. Tore the packet open. 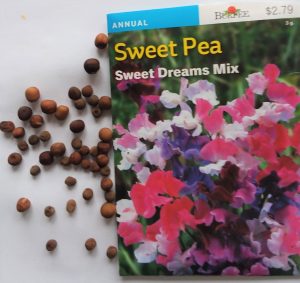 Oh, they told me how many seeds were inside. You know how? Livingston said 500 mg.  and Burpee said 4 gm. Does anyone know how many Sweet Pea seeds to the gram?

By then I was on a tear. Especially when I started reading about the really sweet-smelling Sweet Peas. (You know, Sweet Peas are poisonous, and not at all related to edible peas, even though they make pods.)

Thomas Jefferson grew a Sweet Pea called Painted Lady, from 1737, a tiny bi-color red-and-white of an especially nice scent, which I could order from Plant World  25 seeds for $2.03. Or the red-and-purple Peruvian Sweet Pea, another small one, called Matucana bicolor, same number, same price, same place, said to be “strongly scented.”  That’s 8 cents a pea. Plus shipping, of course. 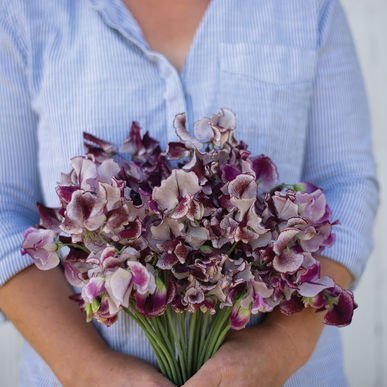 But I fell for a description of the Wiltshire Ripple, a Spencer Sweet Pea from the employee-owned Johnny’s Seeds. In Maine. You can’t get more honest than Maine. First off, the Wiltshire Ripple has long stems and ruffled petals, has streaks that range from cranberry red to chocolate, and three to four flowers on a stem and it’s highly fragrant; They promised 50 seeds for $4.35. 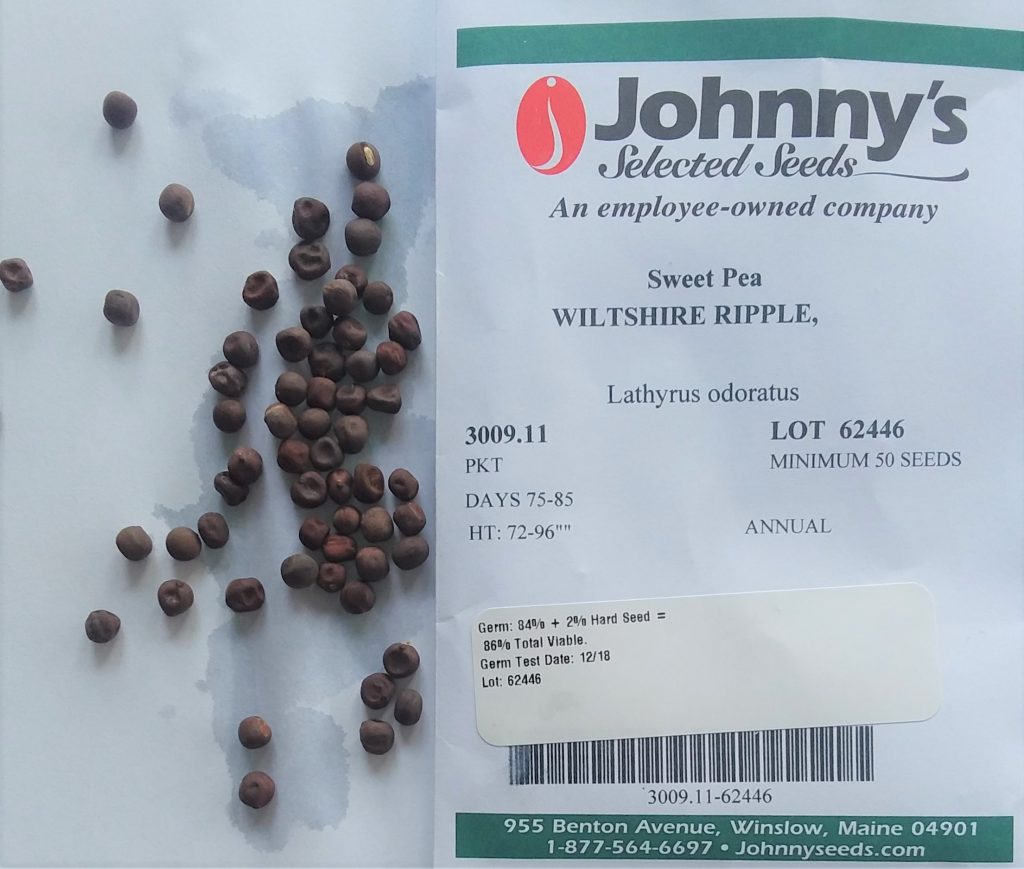 That comes to 6.6 cents a seed. Actually, my count may be off, because the cat kept swiping at the seeds. But it’s close enough. Johnny’s wins! And look at that honest packaging. They didn’t spend any extra money on color printing, did they? So now I’ve got something like 100 Sweet Peas to plant. My dream bouquet looks something like this. And also smells as good as it looks. 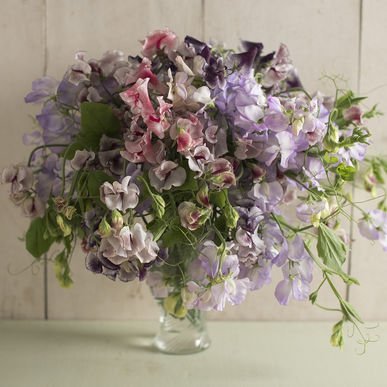 My shipping costs from Johnny’s included some of my newest garden discoveries: 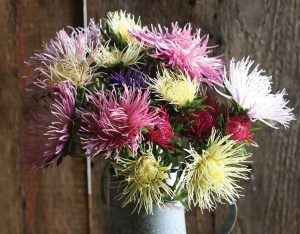 Chinese Asters, which look a little bit like chrysanthemums or peonies or dahlias, depending on which kind you grow. The Chinese aster grows on a single stem two and more feet tall and is probably going to flop over, based on the size of the flower head. It comes in a range of colors, but I went with a soft peach.  I want pale colors instead of the brassy golds I am usually left with as “autumn colors.” 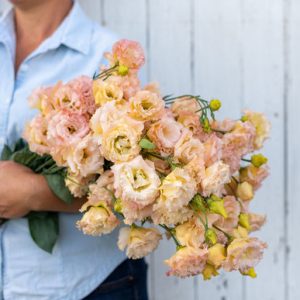 And a flower I used to grow and had forgotten: Lisianthus. I ordered the seeds in two colors: a soft champagne and a nice purple, both of them in double form. Lisianthus is also known as prairie gentian or Texas bluebell and is a charming flower in the garden.

PS: an Update: Johnny’s Sweet Peas were the winner, by far, not only blooming through the summer and even into the fall, but providing seeds for me to harvest for next year. However, growing lisianthus from seed is futile. Or at least it is for me. I love lisianthus, and I’ve had great success growing it from plants bought at nurseries. But from seed, no. And the Chinese, or giant, asters? Perhaps I didn’t pinch back enough of the early buds, but mine were not very giant and not a very pretty color. Instead of peach they were more straw colored. They didn’t give much of a punch to my late season garden. I’ve already ordered dahlias to do that reliably for next summer.