What Flowers to Give to Vets in Appreciation 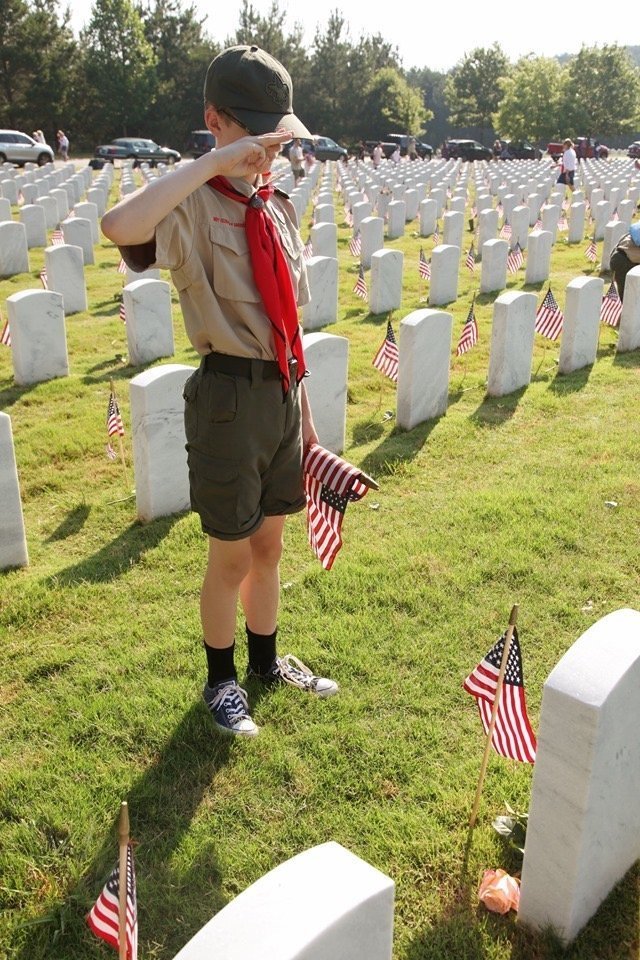 Part of the reason I enjoy celebrating Veterans Day is that you also salute the living. Memorial Day in May honors those who have died while in military service.

Veterans Day, originally known as Armistice Day, is now a federal holiday that honors all military veterans who have served in the United States Armed Forces.
It also is linked to Remembrance Day which is observed in other countries like England and marks the anniversary of the end of World War I.

In England, everyone is silent at 11 a.m. on Remembrance Day which falls on November 11th to honor all those who sacrificed their lives for their country. Isn’t that a nice tradition? Even cab drivers will stop their cars to a screeching halt to acknowledge this moment.

It is also customary to wear a poppy as the symbol of sacrifice. This year American-born Meghan Markle, the Duchess of Sussex, also joined in that tradition along with the rest of the Royal Family.

The poppy is indeed the flower that is linked to military personnel.

Some have thought the flowers were popularized because of their blood-red color signifying bloodshed as a result of someone’s sacrifice to their country. Another interpretation from classical mythology is that the scarlet flower with its ebony interior – black is also a color of death – signifies the promise of resurrection after death.

In Greek and Roman myths, poppies were used as offerings to the dead and were believed to symbolize eternal sleep.

However, many history buffs credit Canadian surgeon and soldier John McCrae for popularizing its use for military remembrance ceremonies. He wrote the poem “In Flanders Fields” during World War I at a place where poppies were plentiful and grew around grave sites.

“In Flanders fields, the poppies blow
Between the crosses, row on row
That mark our place, and in the sky”

In an effort to salute all the veterans who make our lives safer, I decided to give out flowers at a local Veterans Hospital here in New York City. 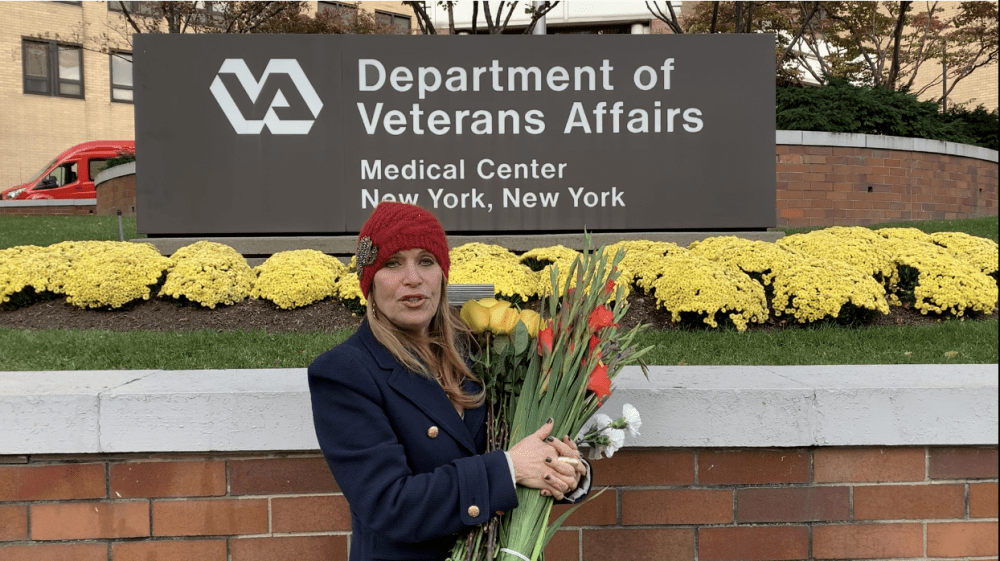 Unlike in England where poppies are readily available, in the U.S. it is harder to find these symbolic flowers.

But I did find three alternatives that accomplished the same goal.

First, I got a bunch of gladioli. Named after the gladiators of ancient Rome, who were warriors and athletes, this flower represents strength, pride and victories.

In the language of flowers, the white-colored carnation has a special meaning too. It represents courage.

My other option was yellow roses which convey friendship and appreciation.
Gathering huge bunches of these flowers at a local Korean market in my neighborhood where Ruben always gets great blooms, I headed off on my adventure.

As I walked through the Veterans Hospital on East 23rd Street, I offered each of the veterans a choice. Which flower speaks to you? 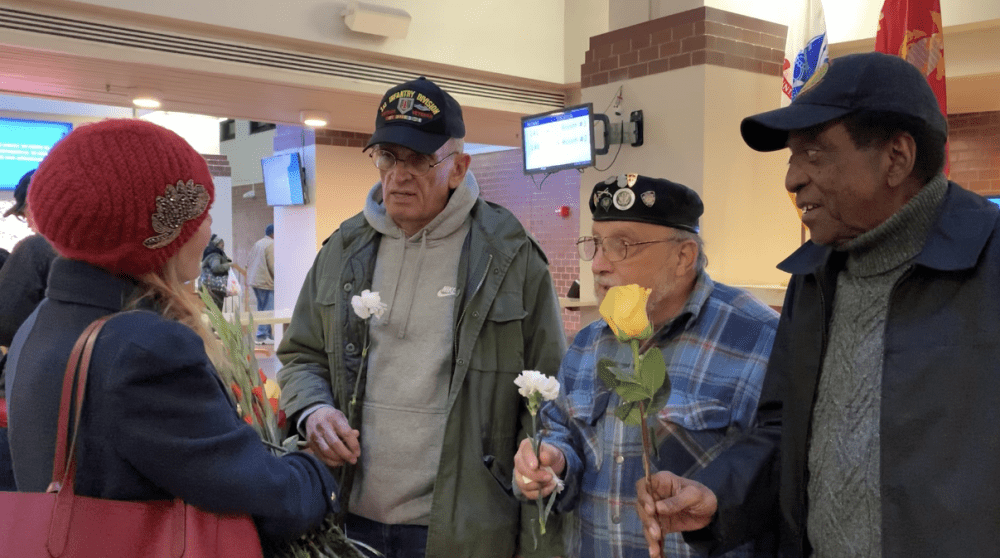 “Carnation for courage,” said one vet. “I already got some but I always need more.”

“Well,” I replied, “You deserve two carnations then. For what you have and what you need.”

We both laughed – a human connection created by a flower.

Crystal, a vet who served in Iraq, chose the yellow rose.

“Thank you for your service,” I said. 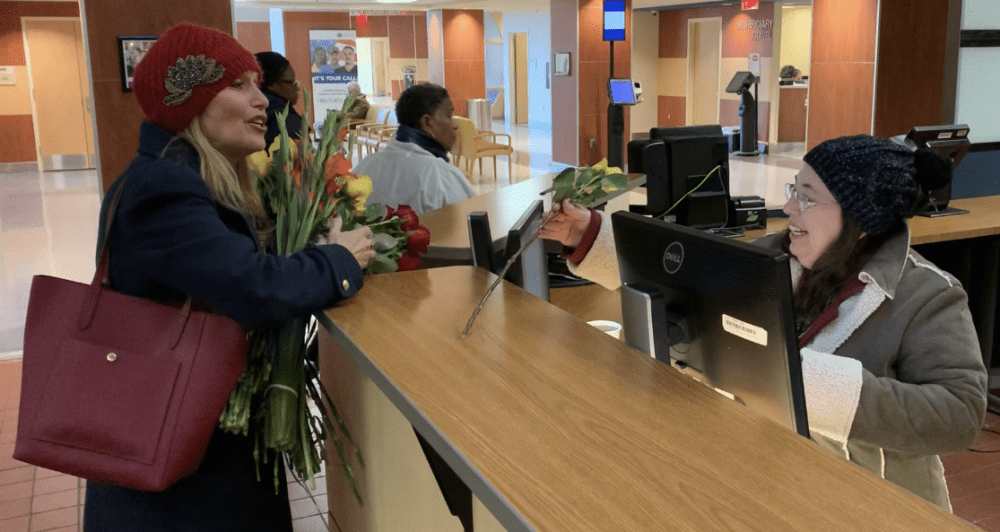 “It was an honor to serve,” she replied. “I love my country.”

Some vets chose the gladiolus – but not the majority. “It looks like a sword doesn’t it,” I said to one vet who choice a purple gladiolus.

Most chose the yellow roses which symbolize appreciation.

“That’s what vets really want,” offered Lisa, a vet who served in the army for 12 years and was deployed in Iraq.

“What else can we as civilians do to express our appreciation for your service?” I asked.

“If you see someone, help them out,” she says. “Sometimes letting them talk about what they’ve been through. Listening just listening.” 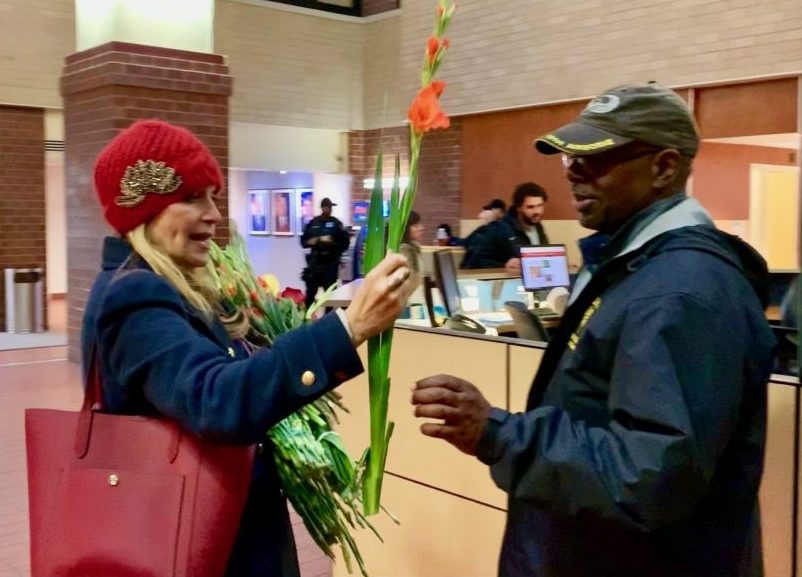 One vet who chose a gladiolus expressed his hope that civilians would ask for “better healthcare for vets.” Especially since many hospitals are under-funded. He also lamented how after Vietnam, vets weren’t appreciated upon returning home.

“That was a shame,” he said, noting how important respect for service must be. “If you are living in a country, you should be willing to defend where you live or you shouldn’t be there,” he said. “We all have to act like brothers and sisters. No parent wants a war for their children.”

Bobby, a vet leaving the hospital, initially didn’t want a flower because he was happy to be healthy and leaving the facility. But the transcendent beauty of flowers triggers emotions. “Actually, I want to give a rose to the nurse who took care of me,” he said.

As he went up the elevator to the surgery wing, we continued our joyful excursion of giving out flowers, hearing vet stories and making new friends.

As fate would have it, we coincidentally ran into him the exact moment he was leaving.

“She loved the flower,” Billy said, sprinting out, a smile spreading on his face.

Inspired by Bobby, we also started giving the flowers to non-military staff.

After giving the flower to Crystal, I gave one to her colleague. “I didn’t serve,” he said.   But, I insisted. After all, the idea of service is caring about others and his warm smile and daily work were helping vets at the hospital. “Thank you,” he replied, filling up with pride. 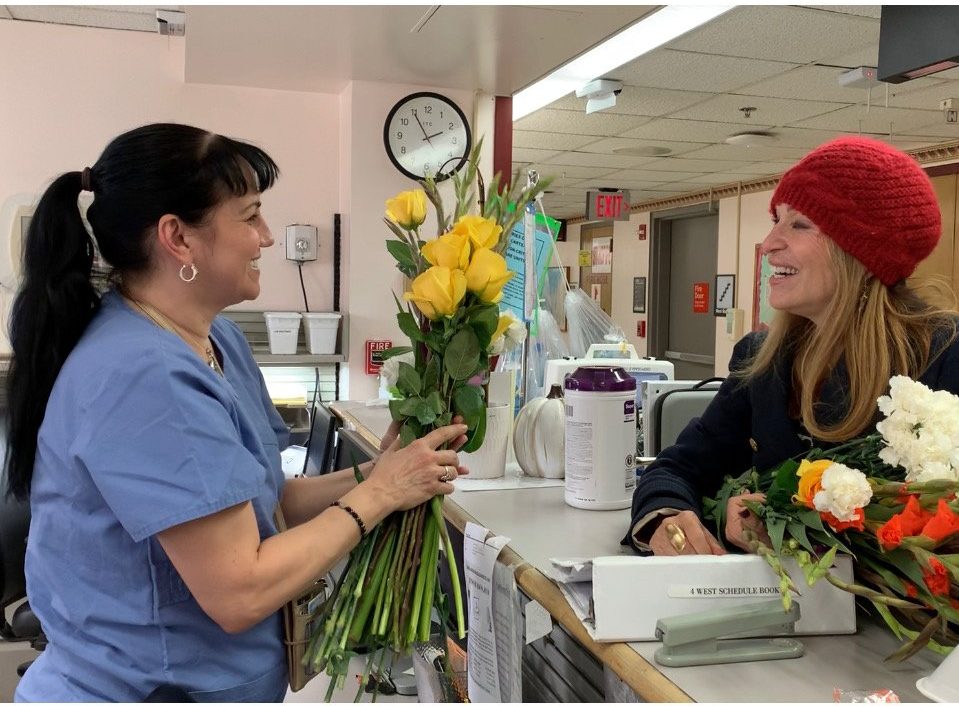 Upon meeting another woman from the nursing staff in the hallway, I asked her to pick a yellow rose too. “In appreciation for what you do,” I said. “Flowers do cheer people up don’t they?”

“Flowers keep you happy,” she said. “Seven days a week.”

Which of course is the whole point. As we say at Flower Power Daily, no act of love is ever wasted.

Along with flowers, people often write cards to amplify their sentiments. The day we visited, a group of school children from P.S.59 in New York had arrived with hand-made cards for the vets. 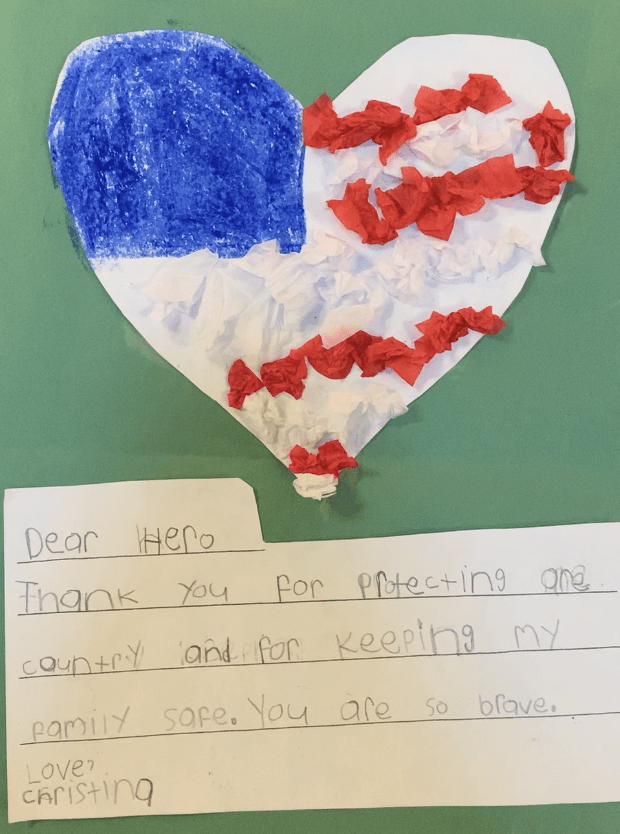 One card particularly articulated what we all were feeling that day for the vets.

Young Christina’s card, decorated with a big heart and filled in with the American flag motif, said the following:

Thank you for protecting are (our) country and for keeping my family safe. You are so brave. Love Christina 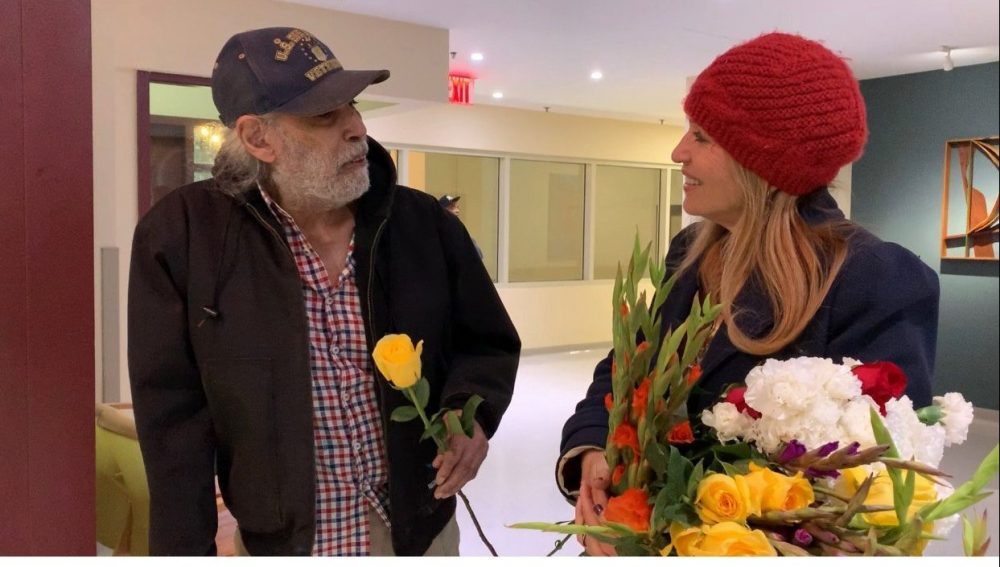 In retrospect, perhaps the day really was also about the yellow rose. Of all the flowers offered along with their meanings, these vets didn’t need to be validated for their strength, courage, pride or victories. They just wanted friendship and appreciation which we were able to say with our yellow roses. – Jill Brooke