Jewelry designer Stephen Dweck may be known as the “romancer of the stones” but that’s because he’s a passionate gardener.

His love of flowers is planted in many of his famous designs which not only are sold at Neiman Marcus and stores around the globe, but also on permanent display at the Metropolitan Museum of Art in NYC, the Smithsonian in Washington D.C. and the Yale University Art Gallery.

Flowers, he says, remind you of beauty, renewal and resilience.

“Land can be devastated by war and give it six months and you will see flowers growing,” he says. “Flowers are an empowering reminder that life can go on. One flower at a time can save the world.”

Wearing one of his pieces does infuse you with a positive energy. It’s inexplicable why his art has resonated to so many and for so long. But maybe the magic is that each piece is crafted through the prism of his heroes, as well as his upbeat philosophy on life.

As a painting and sculpture student at the School of Visual Arts, he found himself drawn to jewelry design because it was wearable art.

Simultaneously – because we are all influenced by many stimuli simultaneously – the Brooklyn born boy kept on having images of the artist Henri Matisse and French master jeweler Rene Lalique pop into his head as he was contemplating his future.

“Matisse was my hero of color,” he explains. Matisse’s bold and pure colors as well as the sensual forms of petals on his flowers inspired the budding jewelry designer. 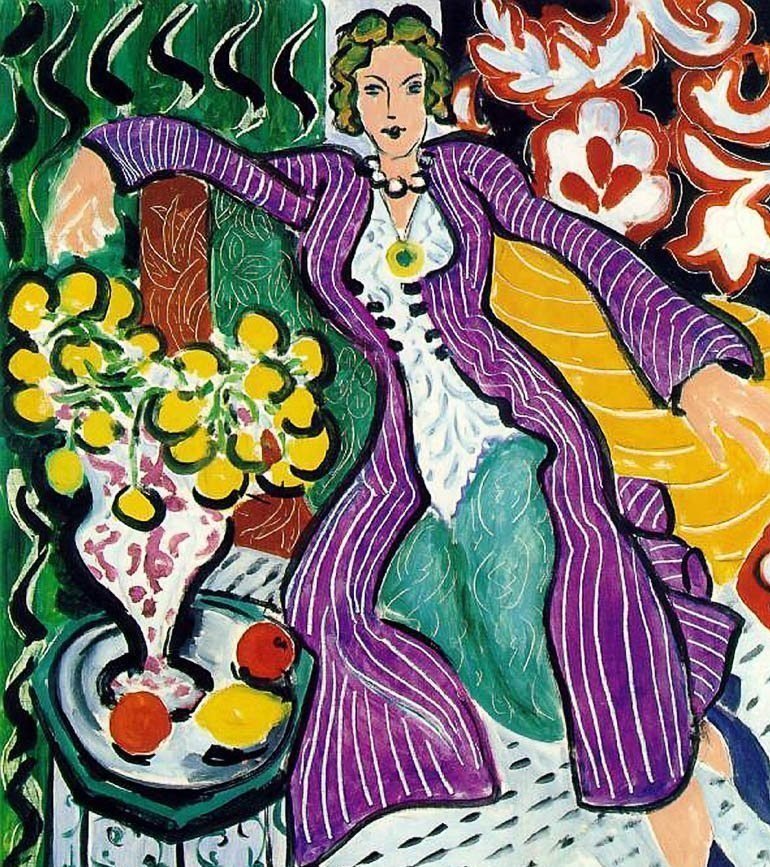 Look at this famous Matisse painting, “Woman in a Purple Coat” which is one of Dweck’s favorite works. Sitting next to the woman is a vase of yellow flowers. Notice how the petals of the flowers are very similar to some of the ring and earring shapes from Dweck’s iconic jewelry line, which has become collectible items. They’re even now sold on the Real Deal. 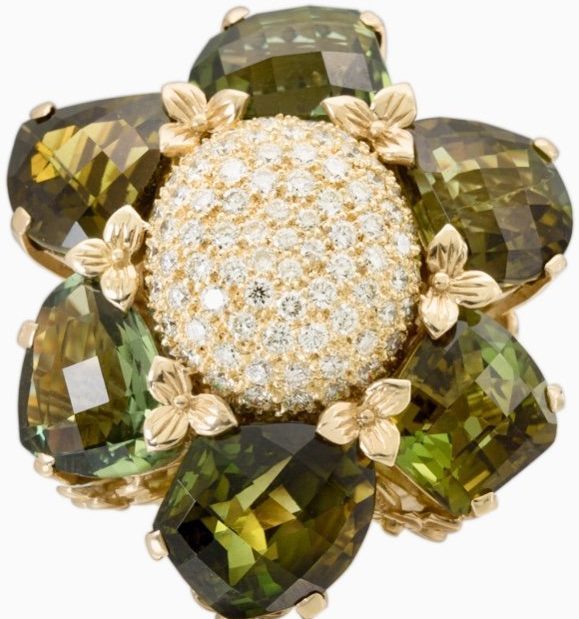 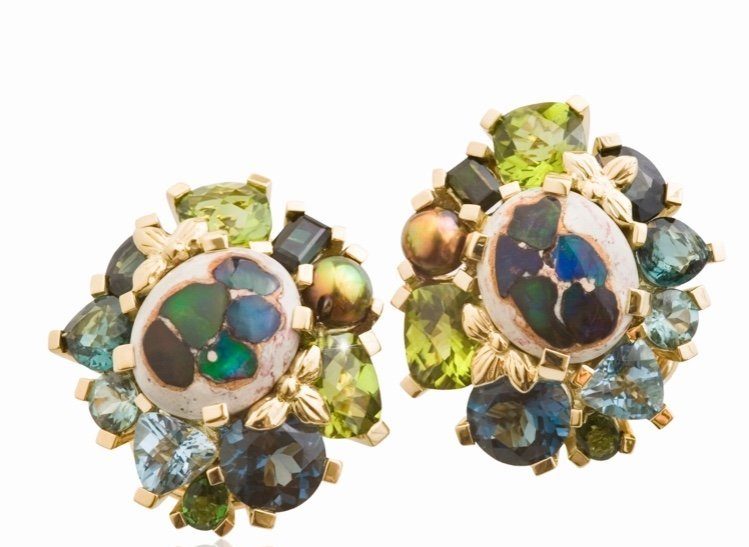 His other hero was Rene Lalique, who was one of the masters of Art Deco design. Lalique was a French glass designer known for his jewelry, vases and perfume bottles.

“Through him I realized that if I paid attention to nature, I could freeze it forever into a piece of jewelry,” says Dweck. “It’s amazing how much detail he put into the flower. Lalique somehow made you smell the carved flower.”  This is illustrated by the following image of one of Lalique’s jewelry pieces. 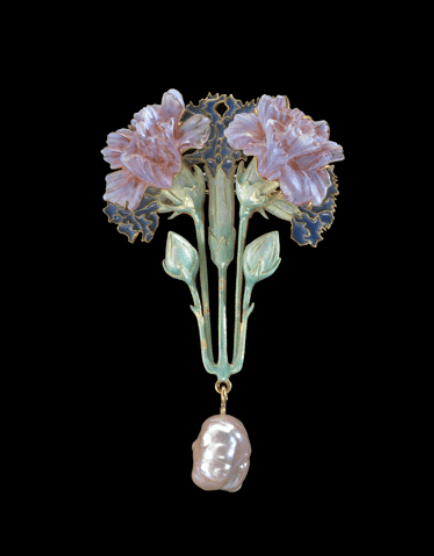 Now, he says, he is carrying “the baton” for that type of detail and amour for all things floral.  “Their genius formulated me,” he says. 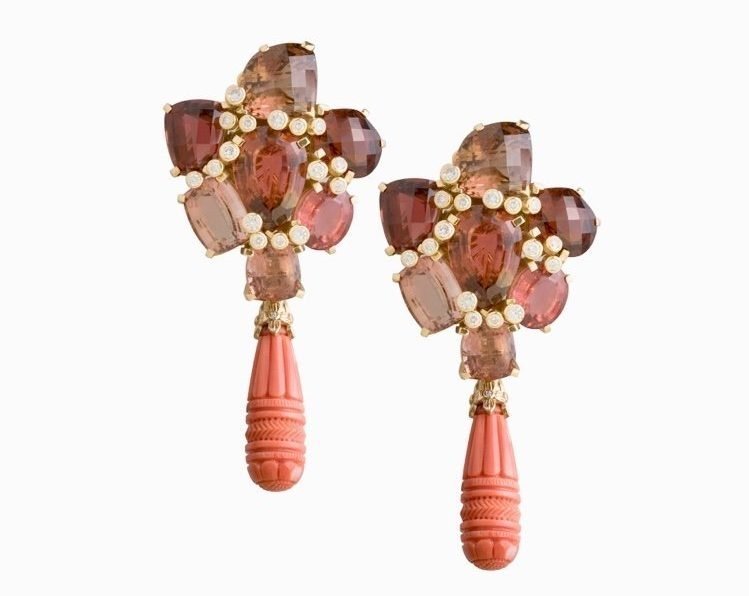 Dweck started his company in 1981.  Young and naive, he created 12 pieces of jewelry and called up Vogue to see his designs.

Not only did they want to promote it, but a meeting with fashion designer Geoffrey Beene soon came as a result.

“He wanted these bracelets for his runway show that had vines of flowers,” says Dweck, still palatably grateful for his stroke of luck.

Soon department stores such as Bergdorf Goodman’s were selling his jewelry and his brand was launched.

Oddly enough, some of his most beloved pieces are white flower earrings and necklaces made with mother of pearl. They glow on the woman wearing them as well as serve as a perfect neutral color. “Mother of pearl is is a remind that the sea is alive,” he says. 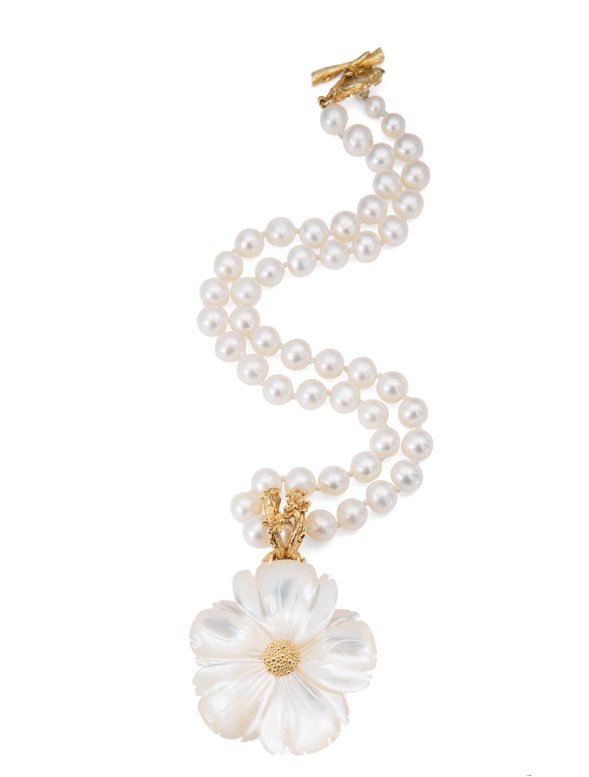 However, he never plants white flowers. “A white orchid in a modern interior of all white is magical. But in my garden I love to plant colorful flowers.”

Roses, marigolds, sunflowers are all inspirations, and have been for other jewelry designers as well.

Part of the reason he gravitates towards colorful gems is that each piece has a surprise baked into it. “I like materials that have things growing inside of it and that happens with these gems,” he says. “Diamonds are supposed to be pure. I like how my favorite stones have natural nuances inside. You can have a quartz from Brazil and another quartz is growing inside it.”

At a time when people are focusing so much on tech, he is finding that a whole new generation of millennials are gravitating to his pieces.

“They need to stop and smell the roses,” he says. “By wearing one of my pieces, they connect to nature and never want to take it off.”

After all, he adds, “Flowers empower you.”

Jill Brooke is a former CNN correspondent and editor-in-chief of Avenue and Travel Savvy magazine as well as chief content officer of firstwivesworld.com.   She is an author and the editorial director of FPD.