Nochebuena or the Secrets of the Poinsettia 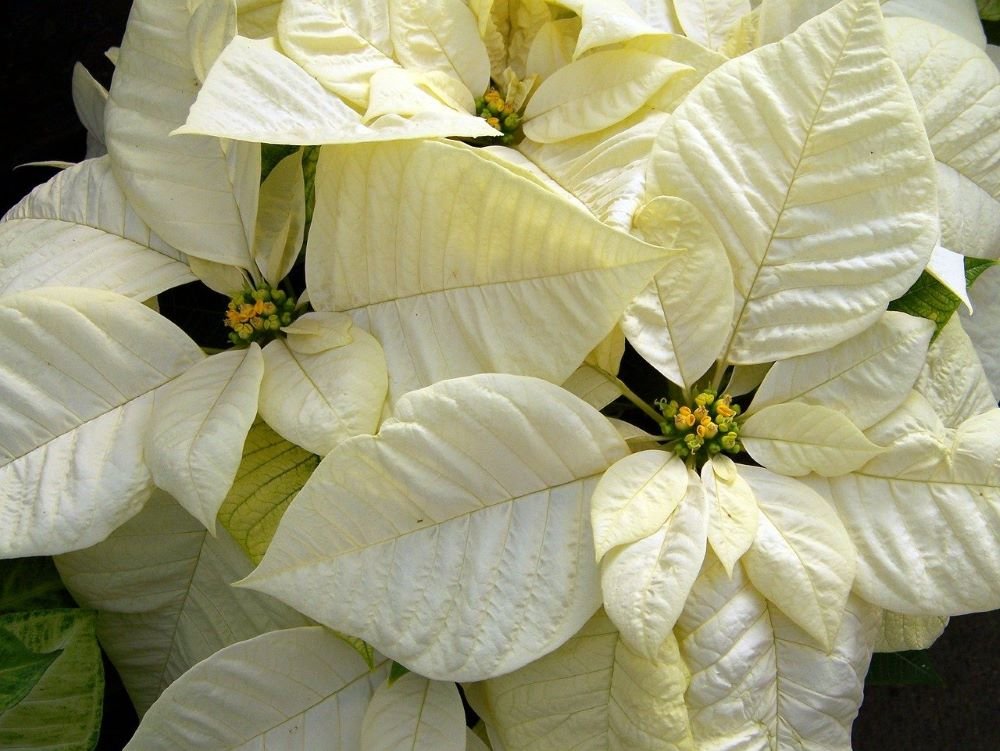 What other plant is named for an ambassador, was revered by the Aztecs for its medicinal qualities, has flowers no one sees, was grown by a man who in 1900 stopped in California while on his way to Fiji to start a vegetarian health spa, and became a Christmas sensation thanks color television and Bob Hope specials?

Before we even start, a word.

The poinsettia is not poisonous. It may look fearsome, with all its bright, aggressive foliage and colorful bracts, the fact it blooms in the middle of winter, its “out of time” quality. But it won’t kill you. The white sap that comes out if you break a stem is latex, and some people are sensitive to latex. But that’s about it. The sign below was part of the University of New Hampshire Thompson School of Applied Science Horticulture program, which had a yearly open house for poinsettia trials every November-December until 2019. 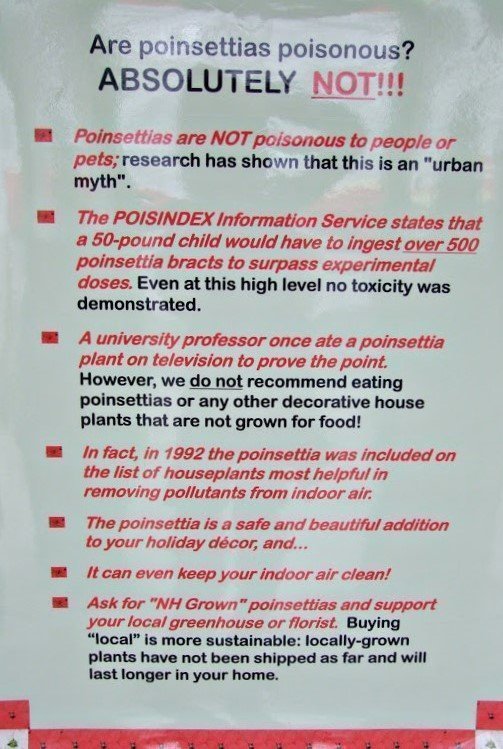 Now, back to our story.

Ambassador Joel Roberts Poinsett was the first U.S. ambassador (or agent as he was called) to South America and became minister to Mexico in 1822. He was a physician, born in South Carolina and educated at the University of Edinburgh. While in southern Mexico he sent samples of this fascinating bush, which locals called “flor de nochebuena,” flower of Christmas Eve, back to the U.S. (He is also recognized for a lizard he found there, Sceloporus poinsettii.) The Aztecs had used this plant, which they called Cuetlaxochitl, to decorate Montezuma’s palace. They used the sap to cure fever, and the red bracts to make dye.

The nochebuena, the flower of Christmas Eve is at the center of a Mexican legend about a little girl who brings a gift of weeds to church on Christmas Eve, and places them on an altar, at the foot of a statue of the Christ child. A miracle turns the weeds into bright red flowers, the flor de nochebuena. 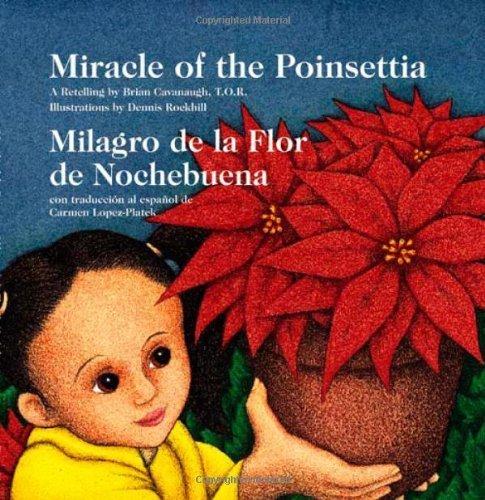 The original nochebuena bush was leggy, and the original flowers were somewhat small. We are going to call them flowers but the red part of the plant consists of bracts, modified leaves at the base of the real flower. The actual flower of the poinsettia is at the very center, and the secret of buying a poinsettia is to look at the flower itself, which looks like little beans. They should be green, or just beginning to turn yellow at the tips. Any poinsettia with yellow flowers at the center, or already throwing pollen, is old. The red bracts will soon be dropping off, and there go the holidays. 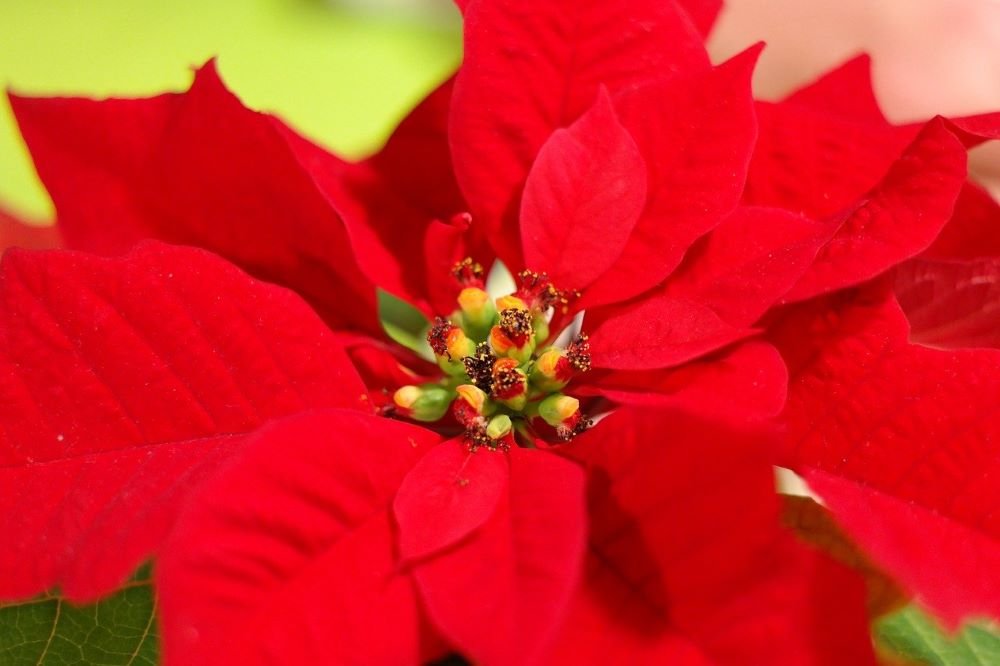 Back to the history of the plant. It was bushy, and what was sold wasn’t a potted plant, it was cut flowers, by 1836 known as poinsettias. Remember that the celebration of Christmas slowly developed throughout the 19th century. It wasn’t a national holiday until 1870.

Dickens’ “Christmas Carol” was published in 1846 in England. The German traditions of evergreen trees, lit with candles, infiltrated English society through Queen Elizabeth’s husband, Prince Albert of Saxe-Coburg and Gotha. German immigrants arriving in the United States, many from the Palatinate, the lower Rhine, brought colorful traditions that became American traditions, especially red and dark green decorations and wooden toys. Poles, Italians, the French and others brought their own traditions, candies, decorations – all of which became part of the American Christmas tradition, from buche de noel and kolachky to antipasto and Russian tea cakes.

The poinsettia fit right in, although it was still a minor player.

Along came Paul Ecke, a German immigrant farmer who was, it is said, just passing through the United States in 1900. His ultimate destination was said to be Fiji, a tropical paradise where he planned to open a vegetarian spa. But two things stopped him: the climate of California, where he began a dairy farm and orchard and, eventually, the possibilities for this strange bush, which could grow taller than a man. 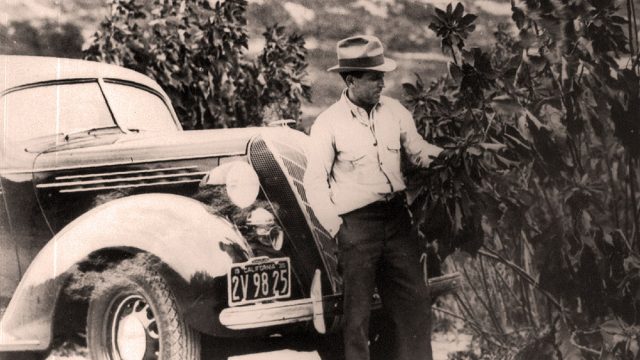 This is Paul Ecke on the Ecke ranch in the 1930s. For nearly a century the Ecke family grew the vast majority of poinsettias not only in the United States but in the world. First it was cut flowers from these bushes, sometimes sold alongside Hollywood Boulevard. Ecke learned to graft the best plants, develop new varieties, and eventually tamed the poinsettia into a potted plant. Plants grown outdoors yielded to tightly controlled greenhouse-grown plants (and the vast ranch land yielded to lucrative real estate, along with a piece of land given away to Legoland).

What gave the poinsettia a kick in the pants was the advent of color television. A second generation of Eckes was just as smart as the first, and handed out pots of these brilliantly colored plants to television networks during the season of Christmas specials. What else would be so cheap as to pack a stage with a dozen, three dozen! red poinsettias. Put them on risers. Put them around the singers on the stage. Put them behind Johnny Carson. Around Dinah Shore. And Pat Boone.

The reds were so “high” in the era of early color television that the poinsettias nearly burned through television sets and into the homes of defenseless Americans. By the early 1960s, every church seemed to have sprouted poinsettias for Christmas.

And then the new colors arrived. 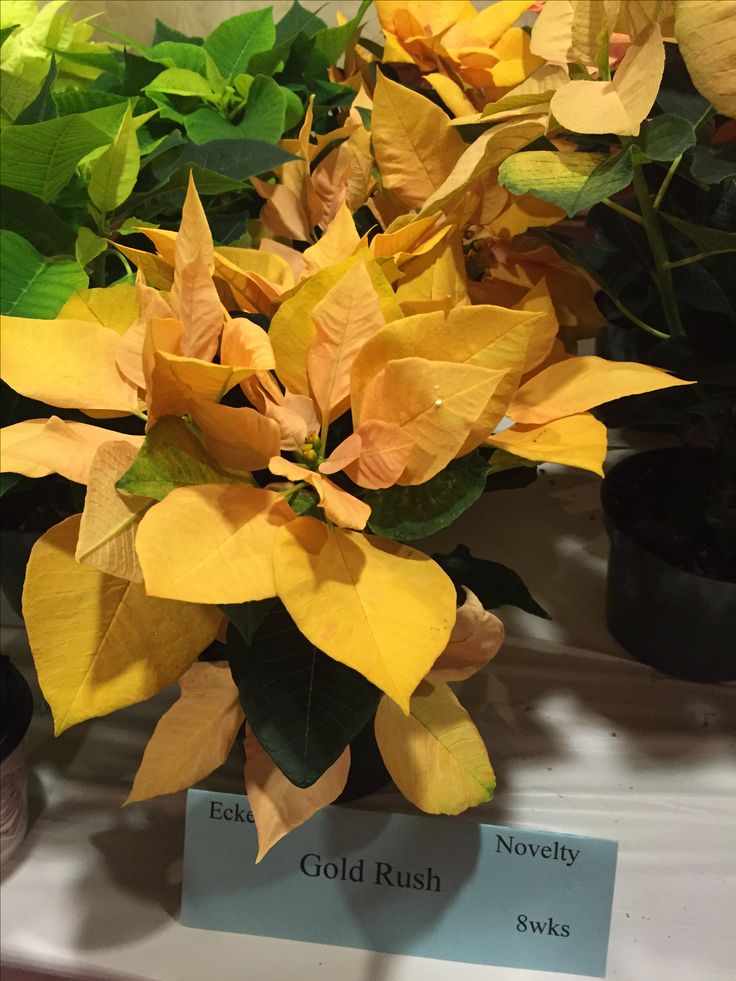 My favorites are the double ruffled bracts, including one called Harlequin Red, which its grower, Syngenta, says can be cultivated as a single flower, or as a branched plant. Harlequin Red, which is as wrinkled as a shar pei, is not something you are likely to find in Home Depot, which is pushing its “Nearly Natural” poinsettias this year, which are not natural at all. 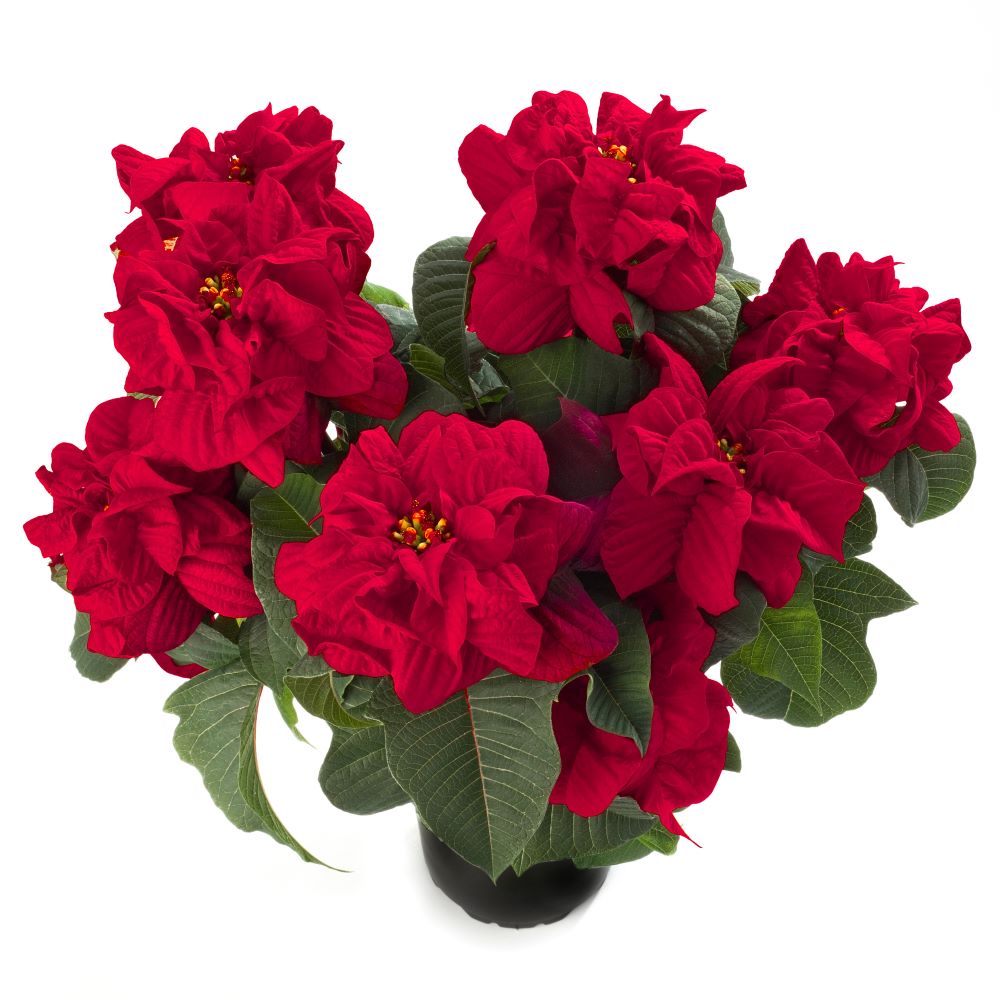 So how do you find such unusual poinsettias? Or do you want a poinsettia at all? Just as interior decorators can argue about the right color of white, plant breeders are constantly looking for the perfect red poinsettia. And if you think there is only one red, you should see the test green houses where a full 18 months ahead of this Christmas, plant breeders are planting, growing, and throwing out hundreds of tries at the right, perfect red. Or pink. Or even white.

The program at the University of New Hampshire, until this year, was host to an annual poinsettia trial and open house, where regular people could visit their greenhouses, see the best of many trials, and even buy some of the more exotic poinsettias. Alas, in May 2019 the University announced it had ended its horticulture degree program because there were not enough degree candidates. 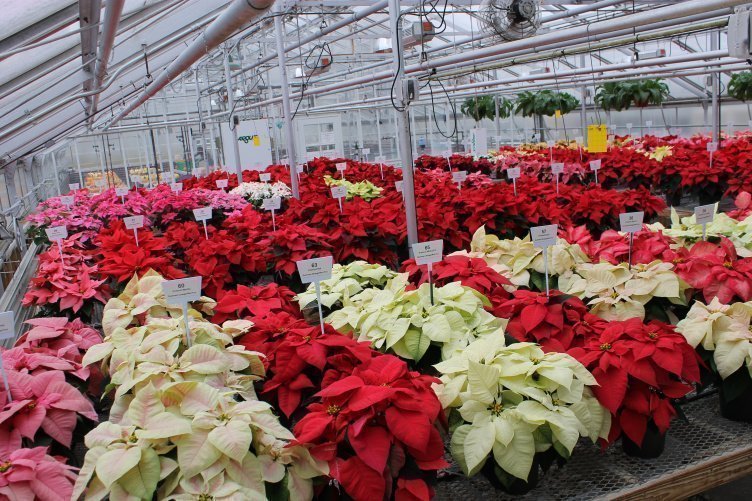 This year trials will be held on December 1, 2019 at Mitchell’s Nursery in King, NC, where 93 varieties will be on display. For information, call 336-983-4107 or email judy@mitchellsnurseryandgreenhouse.com. Another poinsettia trial will be held at Plantpeddler in Cresco, Iowa on December 5, 2019. It is possible at these trials to vote on favorites in each of many categories, and some plants are made available for sale. Again, if you want a poinsettia.

Christmas may come only once a year, but since Thanksgiving is so late in 2019, it seems as though Christmas came immediately after Halloween. Retailers began pushing all things Winter Holiday, including fake and real trees, ornaments, cards, toys, major purchases, Blockbuster Sales! and every other marketing scheme to make sure that end-of-the-year spending would ensure the survival of brick-and-mortar stores.

Or at least keep consumers’ spirits up and make sure that the American economy would survive well into 2020.

So you can do your part for horticulture. Buy a real plant. Make sure it’s a good healthy one. Treat it well. Enjoy it. Think of its history, the man from South Carolina, educated in Edinburgh, who noticed a weedy shrub with a red flower (and a lizard), the German immigrant who cultivated that weedy shrub, and tamed it into a potted plant; his son who got it on television in the era of color TV; and all of the plant breeders who have tried to whet your appetite for something new.

Maybe there is a new red poinsettia out there that is just the red you have been waiting for. – Linda Lee

Linda Lee is a former editor at The New York Times. She was the deputy editor of the House & Home section and wrote frequently for Sunday Styles.