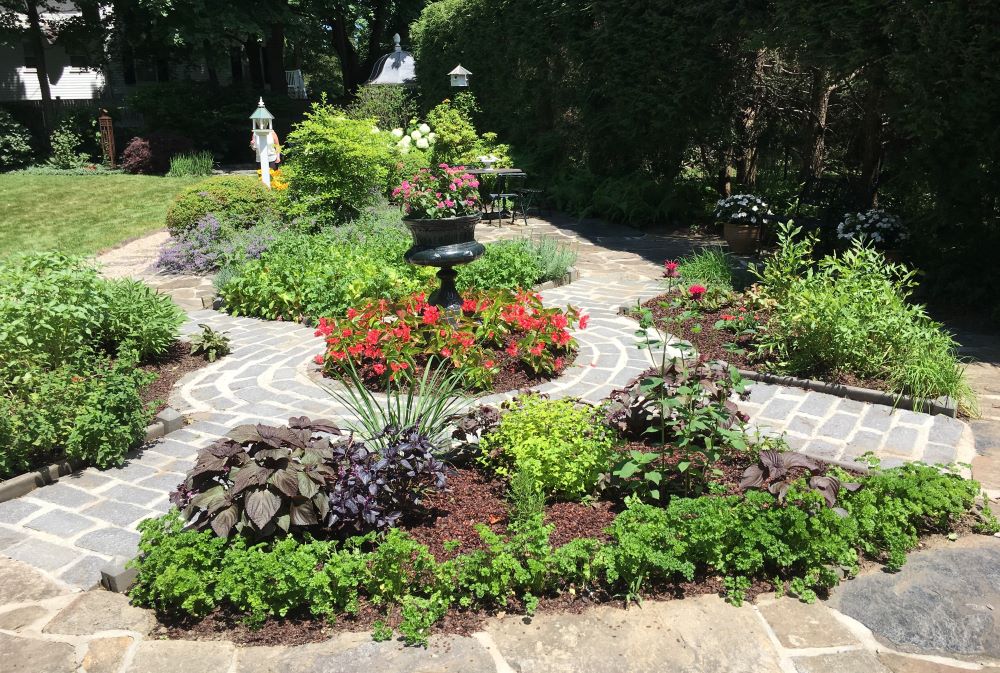 Part of summer fun is going on House & Garden Tours.

Not only do you get to see special gardens and floral displays, but there’s also a good deed attached to the experience.

The 67th Litchfield Open House & Garden Tour in July raised more than $230,000 for the Connecticut Junior Republic, an organization that provides educational services and community programs throughout Connecticut.

Everyone has the same flowers in their garden in July that you do: geraniums, day lilies, petunias, although not everyone has a garden designed by the Olmsted Bros., as seen above. This garden was available at the 1792 Butler House.

In Litchfield, the long history of homeowners can sound almost Biblical, Collins to Collins to Tallmadge to Butler, who brought us only to 1792, to Deming to Deming, to oh, let’s give up. We were only at 1852. 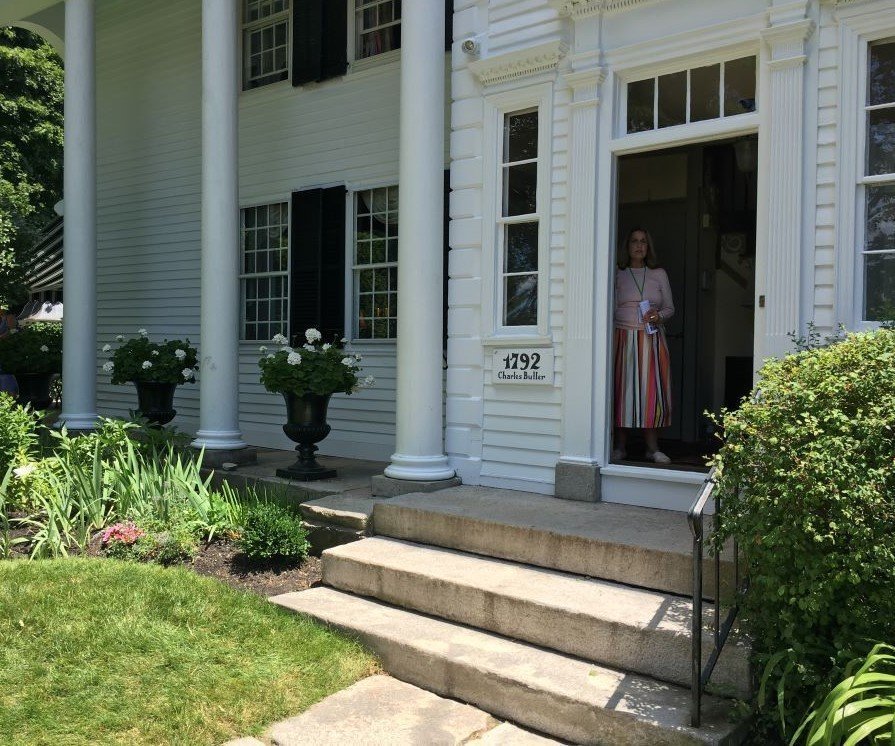 The Olmsted garden was built for an owner named Swayze and even that was almost a hundred years ago, in 1927. The original design had a reflecting pool, which can be seen in the plans, preserved in the Frederick Law Olmsted Archives of the National Park Service, even though the garden was designed by his son. The reflecting pool was filled in, and instead, there is an herb garden near the kitchen. The original gazebo, seen at rear, remains, as do the stone walkways and the designs for shrubs.

The 1829 George C. Woodruff house reminded visitors what a nice display regular geraniums can make if they are planted right in the ground, and regularly deadheaded. These line a foundation, and accompany visitors to an elaborate parterre garden laid out with pear trees, peonies, roses and other plants that, when viewed from the second floor, form a Celtic cross. 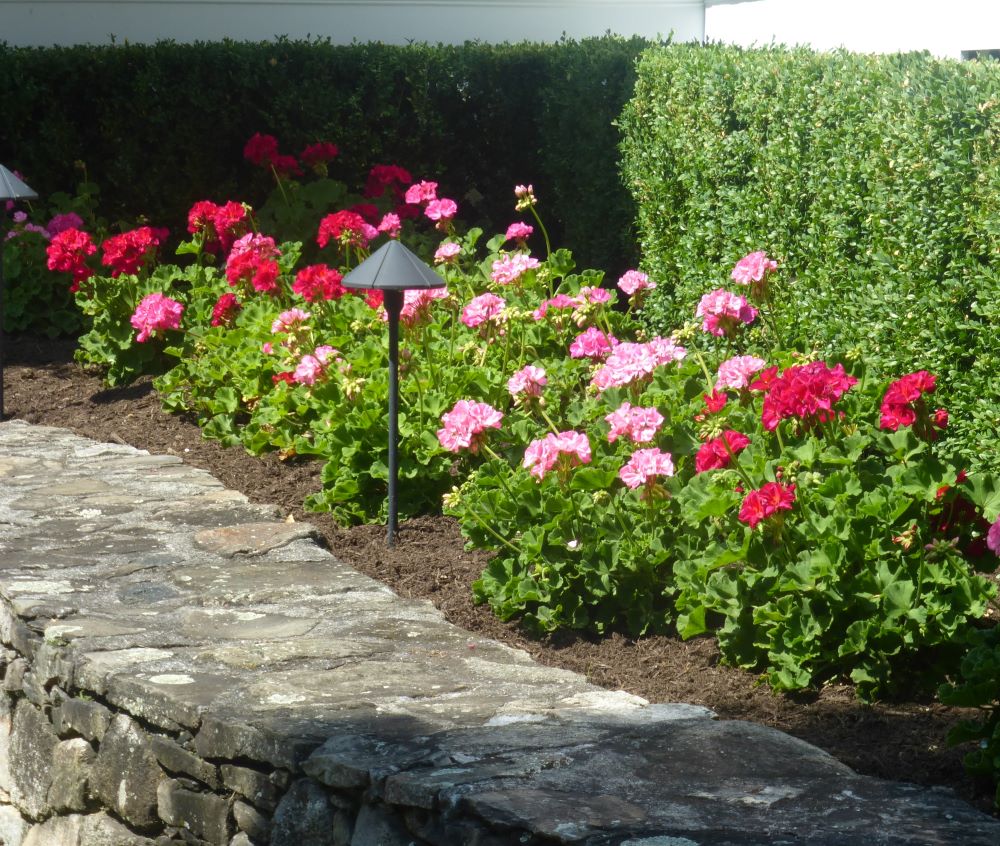 Another delightful find were the ordinary petunias in a giant planter at the plain brown wooden garage behind the oldest house, the 1682 brown saltbox Thomas Painter House!

Well, it looks brown, but the historical notes say that the color replicates the original mulberry-infused stain, so take that as you will. You do learn things on these tours. 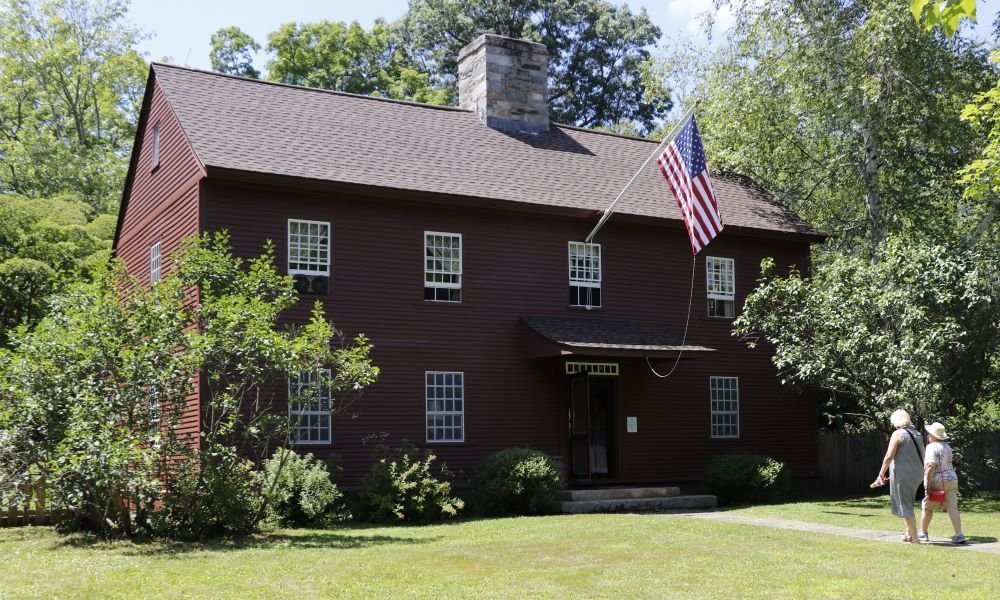 Here’s the wisdom of taking these garden and house tours. It’s the chance to snoop around. You drive by these houses for years, sometimes for decades.

You wonder who lives there, what their life is like, how they respect its history, what their wallpaper is like. Finally, for a modest contribution (tax-deductible!) you can go inside. You might even meet the owners. And their dogs. Never again will you see those houses the same way. You now feel like an insider. 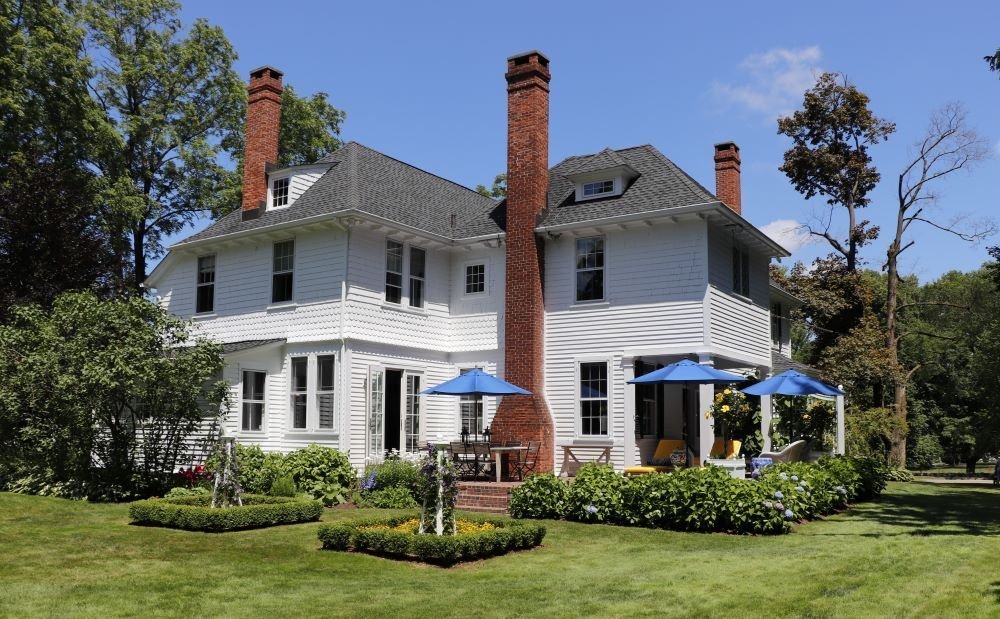 Especially if you read the accompanying notes. The 1886 Frederick Barnard house, above, has gardens by Glenn Hillman, who turns up in places like “Traditional Home” for his garden designs. He knows how to make hydrangeas blue in Connecticut, and has planted Chamaecyparis, rhododendron and variegated aralia, all anchored by clipped boxwood. Those formal clipped boxes frame lovely wooden garden ornaments, and that shaded porch invites late afternoons with a brisk iced tea.

Inside the ten houses, there were copious bouquets that were a bit of stage decoration. They didn’t come from the gardens around the houses. The host committee bought some flowers – roses, ranunculus, lilies, proteus – from a wholesaler, then finished bouquets with flowers from their own gardens. The one below was chosen for the Barnard house. 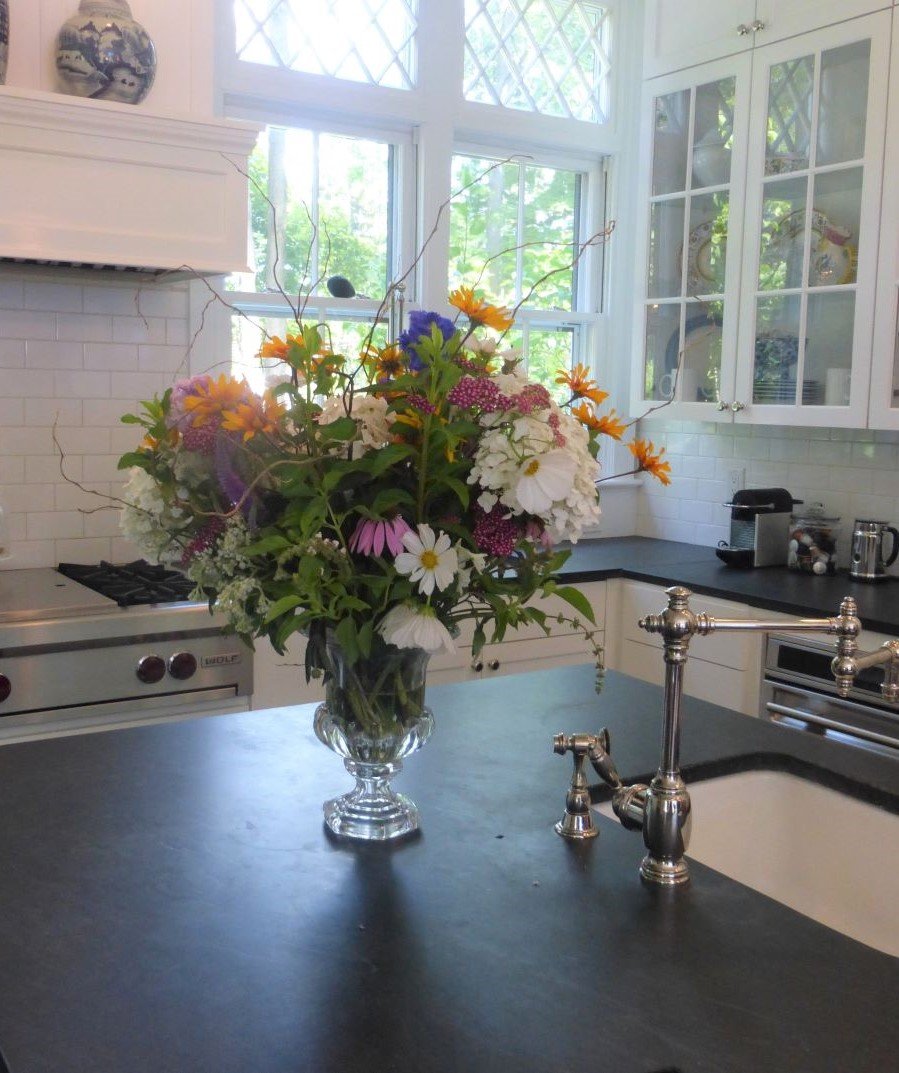 The Col. Benjamin Tallmadge House (1775), historic not just for its age but for this history of the man who lived there, was graced with the bouquet below, which was given a place of honor in the kitchen. Isn’t it delicious? 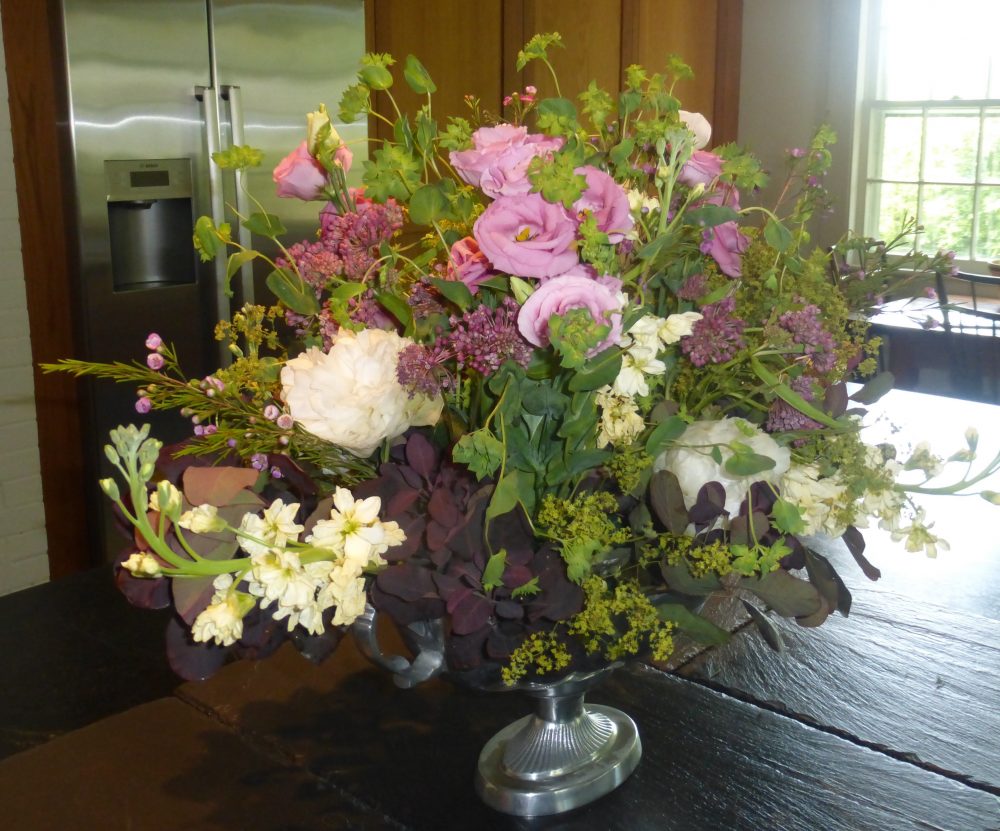 The bouquet below was for the C. Morris Woodruff house, built in 1855 in the Italianate villa style. It replaced a saltbox on the site, built in 1735. The new house was home for a man who descended from Nathaniel Woodruff, one of the original settlers of Litchfield. This Woodruff became a probate judge and president of the Litchfield Savings Society. The formal bouquet was well suited for the dining table. 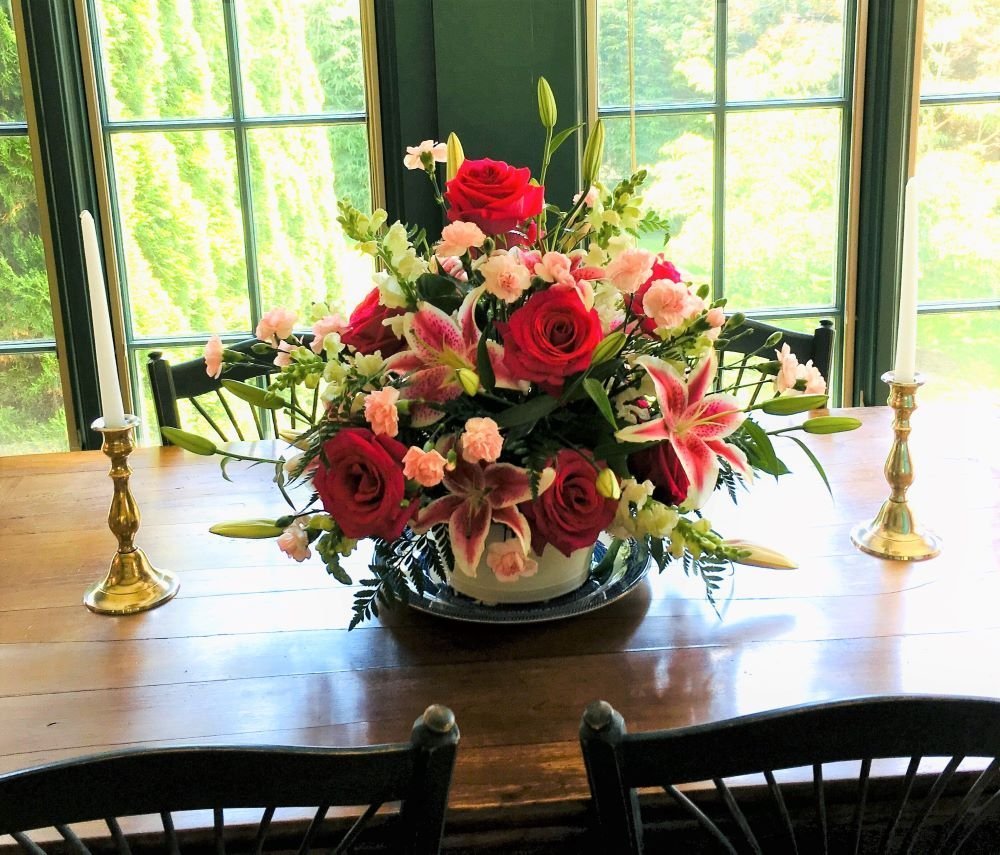 There was one Midcentury Modern house on the tour, designed by Marcel Breuer. It was decided that only a solid bowl of ranunculus would “look modern enough” to match the house’s clean and open design. This was one of two ranunculus bouquets sent to the Breuer house. 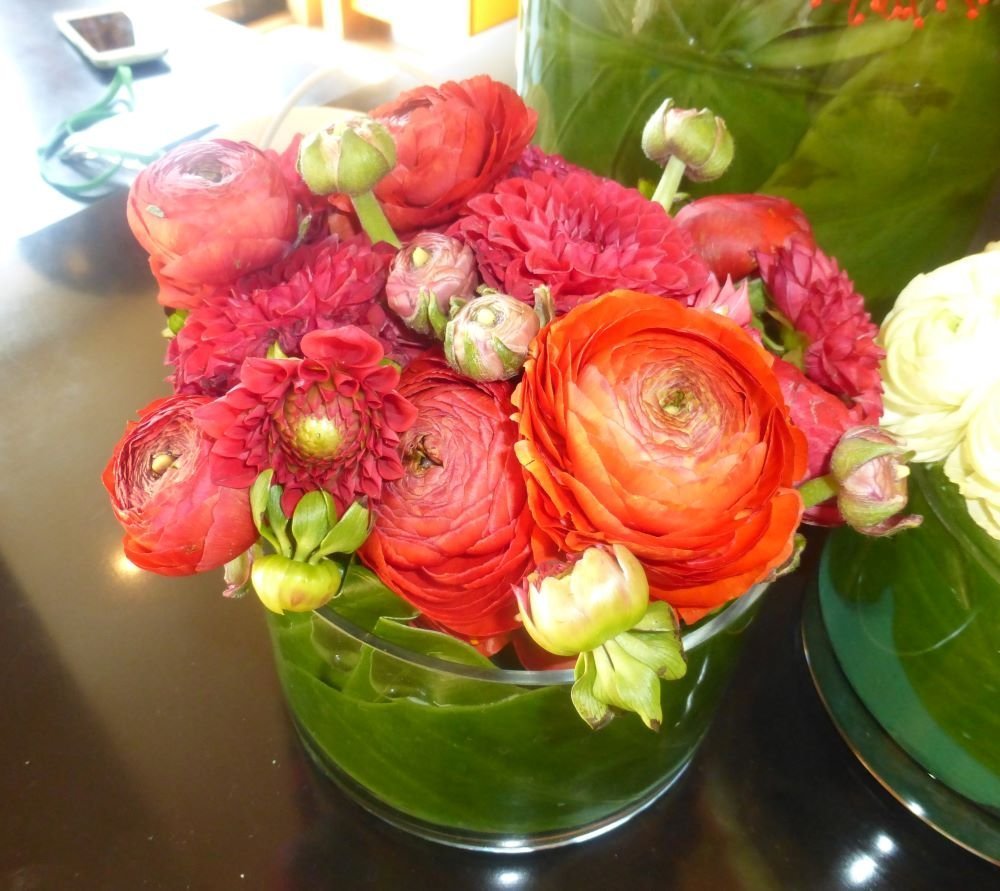 Finally, the delightful Cookie Wagon was fashioned out of left-over flowers from a gala the night before the house and garden tour. 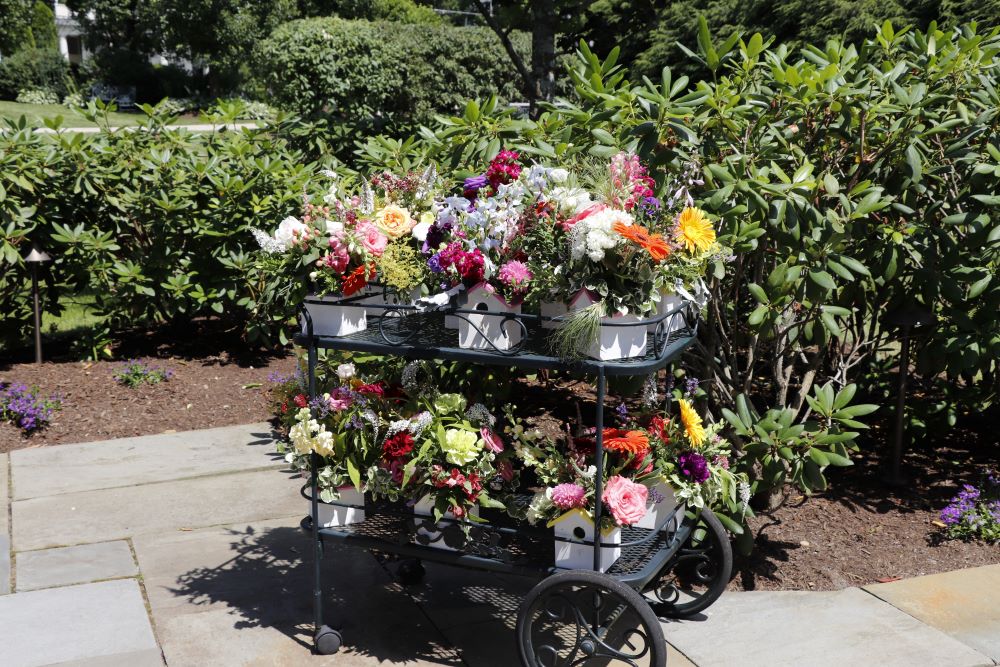 So, in fact, the house tour was a tour of many more gardens than just the ten. It was a tour of all the good gardens of Litchfield, at the hands of the volunteers in the Litchfield wing of the Connecticut Junior Republic.

Some garden tours, especially those earlier in the year, offer gardens in peak bloom. But whenever the garden visit,  tours are always respectful of the generosity of the hosting families. It’s a win-win for everyone. Even those who offer their homes for the tour find it a motivation to spruce up and rake out the garden. For visitors it’s a delightful way to spend an afternoon and get inspired, while of course contributing to a good cause. — Linda Lee

Linda Lee is a former editor at The New York Times. She was deputy editor of the House & Home section, where she also edited the garden column, and she wrote frequently for Sunday Styles.