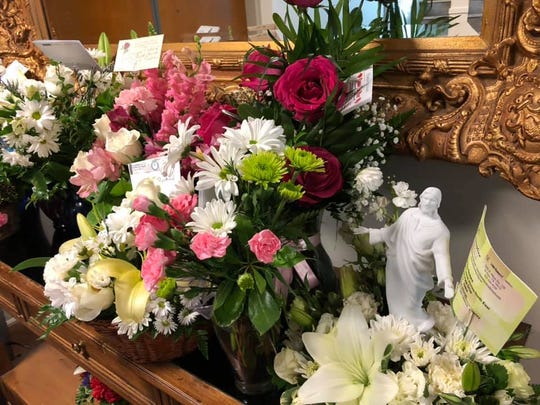 “I thought the computer was broken, because it kept printing and printing,” said Maria Delgado, owner of Carter’s Flowers on North Piedras Street in El Paso, Texas. Those were orders coming in, from all over the country, New York to California, for a memorial service.

Those flowers were not so much for the dead woman, Margie Reckard, a victim of the Walmart massacre on August 3, as for her common-law husband of 22 years, Tony Basco. Tony told anyone who was listen that he was left with no one.

A journalist, Carlos Armendáriz, saw Basco mourning his dead wife at a makeshift memorial in the Walmart parking lot and listened to him. Basco brought supermarket flowers and spread them at a cross he had fashioned. Then he knelt in front of votive candles.

“She loved any kind of flowers,” he told a reporter of his dead wife. “I could walk down the street and find flowers that had been run over a thousand times and she would think it looked like a million dollars.”

Armendáriz took this photo and posted it on his Facebook page on August 6, in between pictures he posted of his own wife and cute daughter. 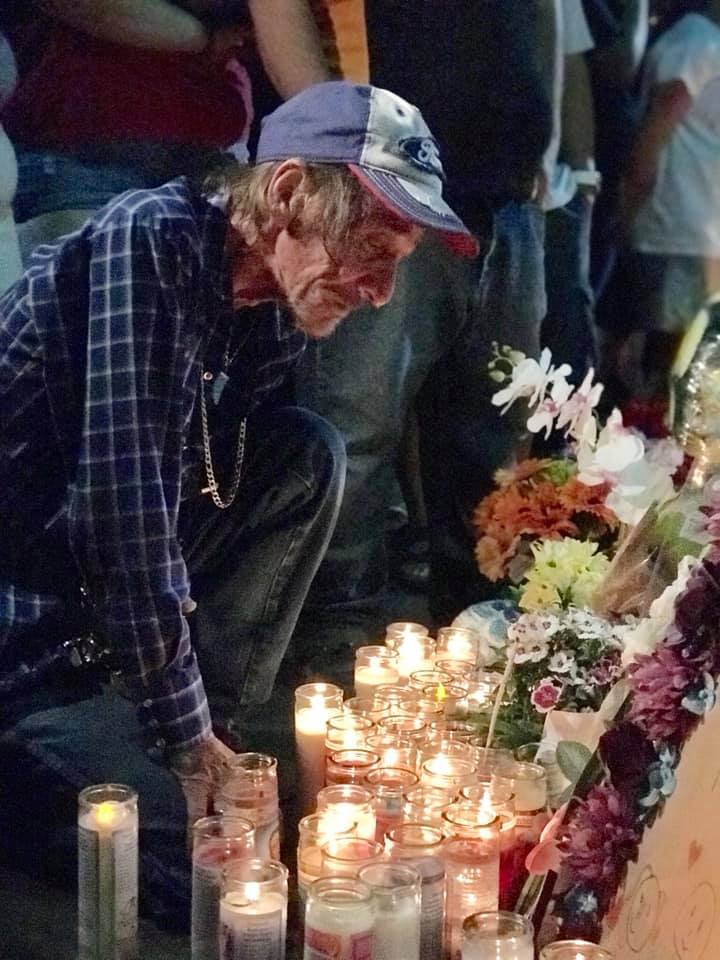 Armendáriz did not copyright the photo, or intend it for publication. He wanted to post on his Facebook page and to write, in Spanish, then in English, “Married for 22 years, he comes and prays every day for his beloved wife who lost her life in last weekend’s tragic events.” And then he gave a URL for a gofundme page he had set up with two others with a goal of raising $1,000 for Mr. Tony, as he called him. Something to help him after the funeral service was over.

The photo was shared on Facebook, and then on Twitter. The funeral home, run by Salvador Perches, that was to handle Margie Reckard’s service (for free – that generous offer was made for all 22 victims of the Walmart shooting), then had the idea that Tony Basco should not mourn alone. Perches Funeral Home extended an invitation to all El Pasoans to attend the memorial service.

And ultimately to anyone who wanted to come.

The idea of sending flowers came up on the internet, although Twitter didn’t seem to know about Armendáriz’s gofundme page. On Twitter people were thinking about sending $10 cards for Taco Bell, or Wendy’s. Or joining together to form a support group that would somehow look after Tony, from afar. Still it was easier to send flowers, thus Maria Delgado’s computer began spitting out orders.

Newspapers and television stations picked up the story of the man who was alone, and they had Armendáriz’s dramatic candlelit photo. More flowers. Some media reported that flowers came from as far away as New Zealand, Ireland, Japan and Norway. Flower Power With Jill was not able to confirm.

Soon people were booking tickets from as far away as California to attend the service, and to hug Mr. Tony. One person on Facebook offered his services as a barber.

For a florist, Delgado said, “it was like Mother’s Day.” Any florist could sympathize when she said their supplier ran out of flowers, and they had to fill in with flowers from Albertson’s, a supermarket.

“We sent 77 bouquets to the service. And people were …” she paused, searching for a word “very splendid in their money.” Customers, she said, ordered bouquets in the $100 range. “So the kindness was overwhelming.”

And yet when Carter’s got their floral arrangements to the church, she said, “There were some that were bigger than the ones we did.”

There are a lot of florists in El Paso. Heaven Sent Florist on North Mesa Street K, filled 108 orders easily because, the owner said, “I have suppliers in Miami and California, that’s why I was able to keep up,” Rafael Delfin says.

“They started trickling in, then there were a bunch, all at once. We were working through the service in the afternoon. We took five or six vans full of flowers,” he says. 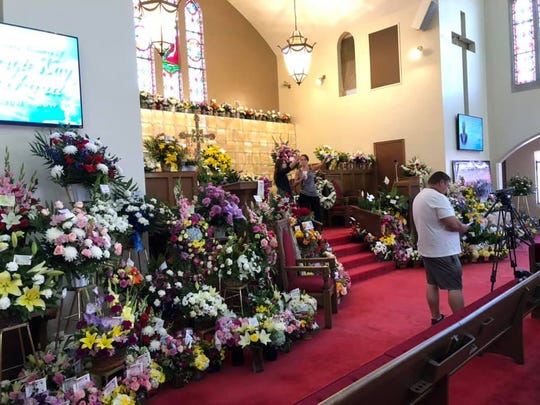 Some people were ordering flowers during the visitation, which lasted from 5 Friday afternoon, August 16, until after 11 pm. During that time more than 3,000 people lined up, in 100 plus degree weather. The lines went around one block, and then around a second block, all for a chance to walk through the La Paz Faith Memorial and Spiritual Center, a gigantic complex that occupies an entire block. The visitation had been moved from Perches Funeral Home to La Paz because of the expected crowds.

But still, there was no room for all the flowers. “They weren’t all in the sanctuary,” says Gail Rubin, a certified expert on death and dying, who happened to be there for an event, “Rise El Paso,”organized by Sal Perches.

Her job was to deliver an uplifting message about spirit and light and darkness, and to leave El Pasoans with courage to rebuild the community.

Also, as she told Flower Power With Jill, she is Jewish. “You don’t send flowers to a Jewish funeral. That money is better donated to charity. One of my Jewish friends commented as much on my Facebook page.”

“And there I was. I found myself surrounded by flowers,” she says. “They weren’t all in the sanctuary, they were in the windows, they were on the tables, on the floor, outdoors, in the vestibule. It was all over the building, and in a smaller building.”

She took the photographs inside the sanctuary she generously offered to share with us, which are, note, before more flowers were brought in at 5 pm.

So now comes the question. Were those flowers wasted? Were her Jewish friends correct?

Let’s start with what it did for the El Paso economy. It was a benison. All of those florists, the people who work at the funeral home, all of the other people you are about to hear about… those people were employed who would not otherwise have anything to do in the days following the shooting.

The Walmart mall is a crime scene. People are out of work. At least this avalanche of flowers has brought commerce to this city.

Second. Those flowers were not wasted. The excess flowers – and some of them did not even arrive in time for the “visitation” at La Paz – were then sent to the burial ceremony Saturday morning.

It was private. No press. But it’s nice to think that fresh flowers, for a woman who probably didn’t have that many fresh flowers in her life, were there to grace her grave.

Margie Reckard had children from a previous marriage. She had others to mourn her. When Tony Basco says he has no one to share his mourning, let’s believe him. These children came from outside El Paso. When they go home there is no guarantee they will take care of him.

So. The burial was Saturday, and fresh flowers were there. No press was allowed and there are no photographs. Some extra flowers from Friday were sent to churches for Sunday services, especially churches of victims of the Walmart shootings.

But the rest of Sunday?

Sal Perches had an idea on Thursday night according to Gail Rubin and Perches’ general manager, Jorges Ortiz.

Why not make a final processional. 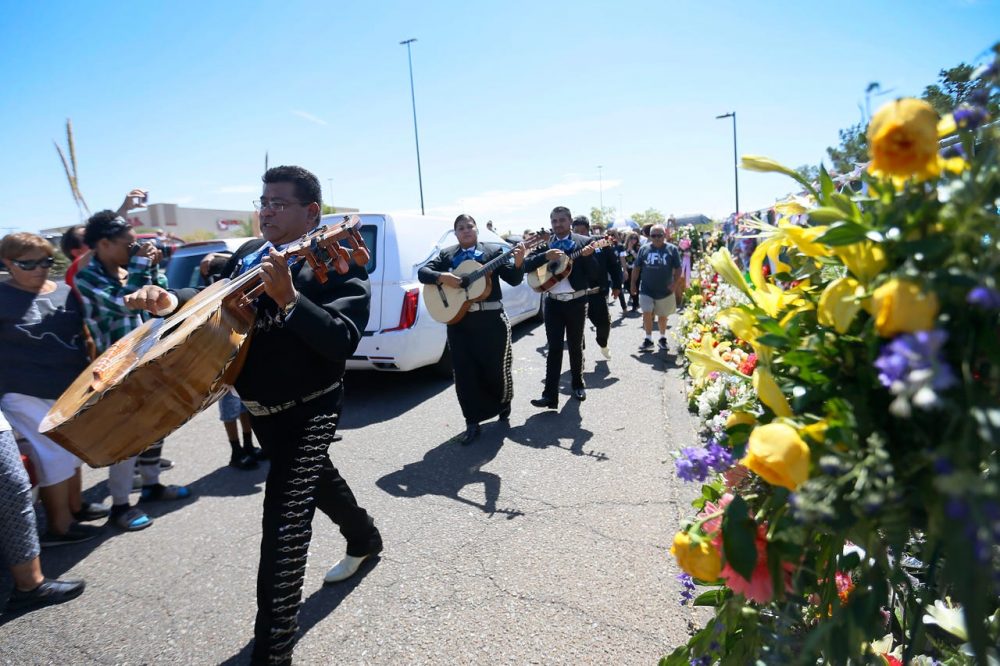 Perches was a funeral director (among many other things). He knew about the power of symbolism. Flowers accompanied people to their graves. Then what?

He called the funeral directors who handled the other services. Let’s let the flowers lead a procession to Walmart.

On Sunday, August 18, as Jorge Ortiz said, “It was our last funeral procession.” Twenty-two hearses, most of them white, made a solemn procession loaded with all of those flowers, from people all over the world. Maybe there were 500 of them. Or 1,000 of them. Does it matter? There were crowds, and mariachis and the El Paso community.

Those hearses were filled with the country’s response to one man’s loss, to a senseless shooting, in El Paso, a peaceful, bi-cultural city, in August, 2019, expressed in flowers.

The flowers were left at the Walmart, to wilt in the El Paso sun. But they will not be forgotten.

It is hoped that people will take the plants home, and tend the flowers until there is no more life in them.

So there can be flowers and money. It’s not either/or. Love and kindness can elicit both.