Outdoor Decor: It’s Late Summer But Not Too Late 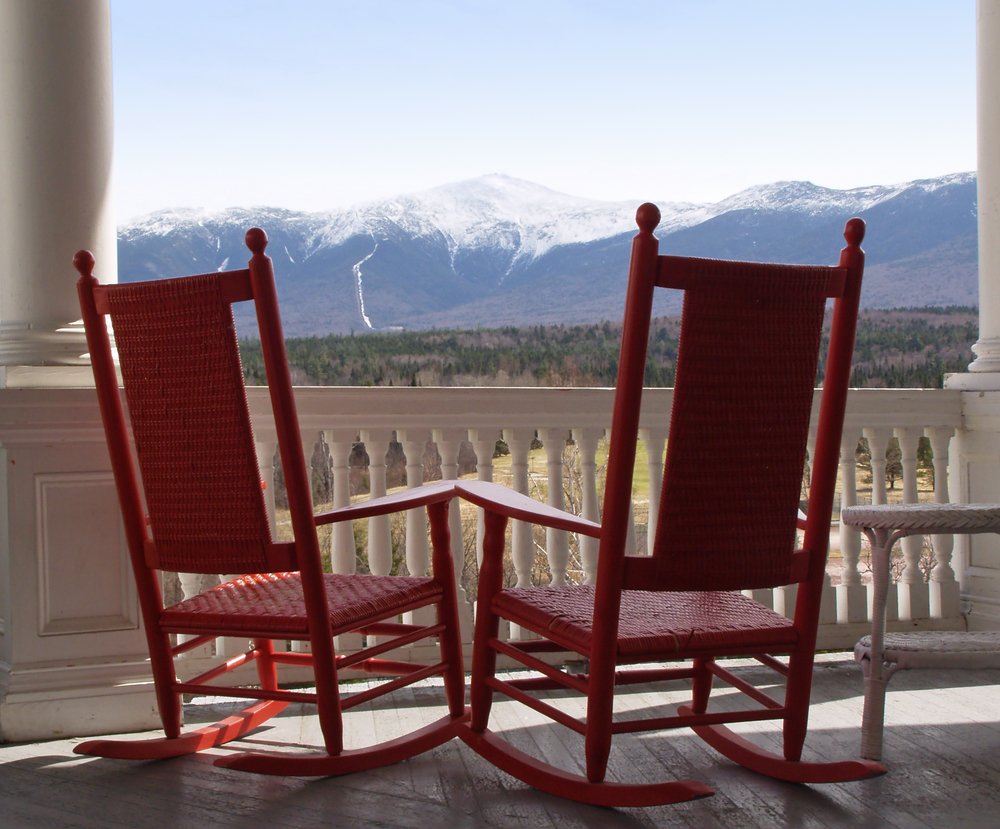 They call them the lazy, hazy days of summer. Children are home from summer camp, and getting ready for school. Most adults take vacation days about now, leaving the office in the hands of newcomers and temps. (Good luck, y’all!)

Meanwhile, those lucky enough to have, or to rent, a summer place – in the mountains, by the lake, on an island, by the seashore, in the desert, in the woods, with grandparents – you know where I’m talking about, must have a favorite spot for early morning or late afternoon. 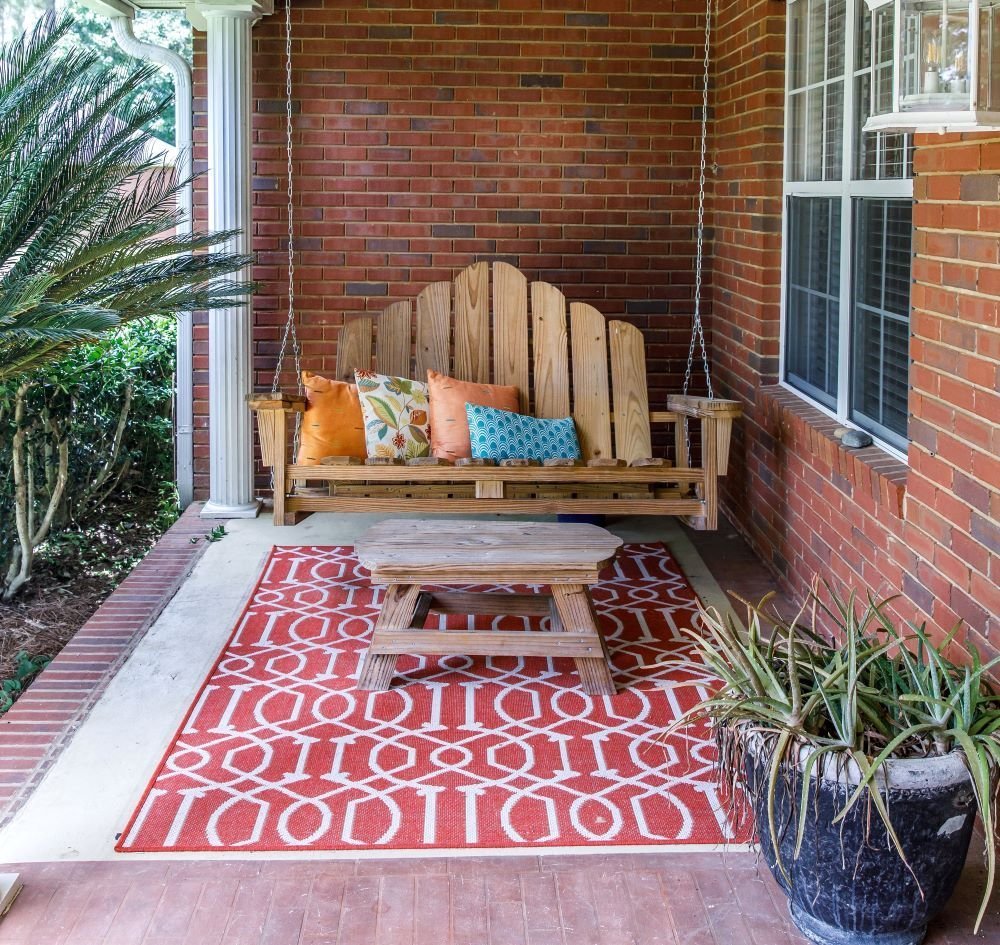 Come on, we know you are busy in the middle of the day. You are shopping for groceries, running errands, swimming.

But early morning, with a cup of coffee before you go for a walk with the dog, or go fishing. Late afternoon, after you drag all those wet towels back to the house and heave them over the fence. After you kick the sand off your shoes. That’s the time to sit on the porch. Or the patio. When the sun is over the yardarm. With a beer or a martini. Another cup of coffee.

It’s time to bring in those tomatoes. And much too late in the year to weed the garden. Friends are going to be stopping by.

The kids are exhausted, or even better, at someone else’s house.

Hey, Granpa said he’d give them pizza and show them a movie, “Butch Cassidy & the Sundance Kid.” Now they are staring at their cell phones, stunned at how slow movies were back in the 1900s.

You don’t care. You are outside.

Your space can be a porch, a terrace, a garden spot near the house. But wherever it is, it needs a few things.

Something to sit on, of course.

And a rug. Seriously. Unless you have a perfect clay-tile floor, and even if you do, you should throw down a rug. People will end up sitting on it, maybe with a pillow.

Those outdoor rugs are cheap, or can be. Think of one as a weekend’s worth of wine and cheese. 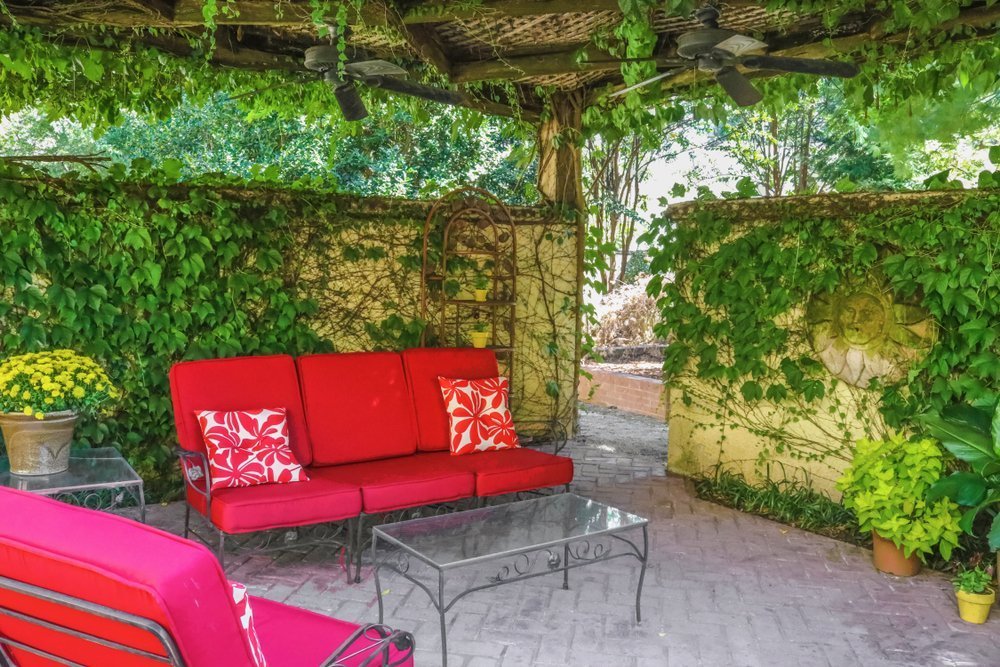 But they do so much to pull an area together. Look at the space above. Perfectly nice pillows. Bright sofa cushions.

But the glass coffee table just seems to be sitting there. There’s no closure. No definition of the sitting area.

You wouldn’t even want to put your feet down on that floor. It certainly is an outdoor room. It even has a ceiling. But why no rug? 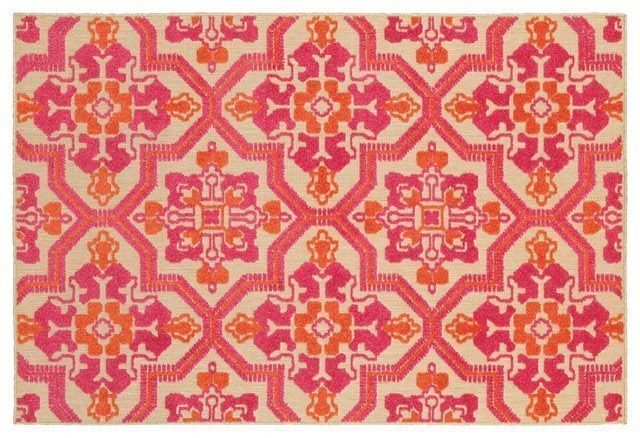 Ok. That’s probably two weekends’ worth of wine and cheese, but still, a rug is going to last more than one summer, especially if it’s kept out of the sun. One tip on indoor-outdoor rugs – they may resist mildew and mold, but they are going to fade if left out in the blazing sun. Most can be cleaned with a hose and mild soap and dried in the sun. If you are away for a long time, just roll the rug up after it is clean and dry, and put it out of the sun.

These rugs are usually lightweight. When you roll them out again, you may have to weigh down the ends to make them lie flat, but that’s what flower pots are for. Just don’t leave the flower pots on the rugs.

The great thing about a rug is that it takes the eye off the rest of the furniture. Go ahead and buy things at yard sales, or Target. Painting  some rusting iron lawn chairs from the dump, ahem, transfer station, as I did last summer, will give you a great looking set of credible furniture. As you can see below, a few bits of textiles can disguise the cheapness of the rest of your things, as long as the chairs and table don’t collapse during a luncheon. 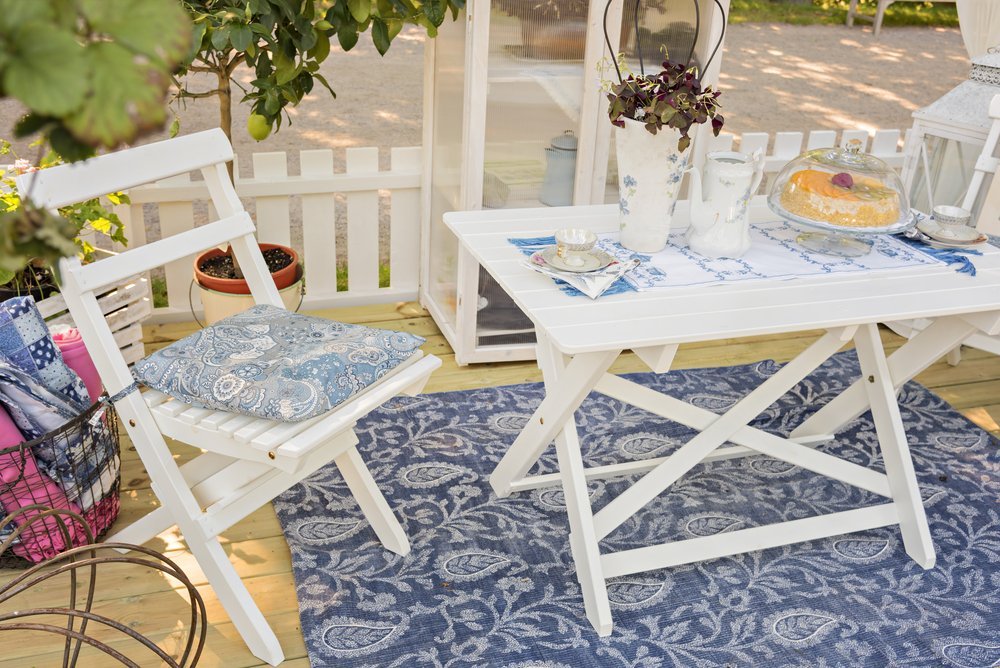 But then again it is possible to go to the other extreme. There is, for instance, a temptation to stop at a darling store in the Hamptons, Nantucket, Shelter Island, Madison Avenue, the Berkshires, Wiscasset, Bucks County, Charleston, Fredericksburg, and to walk out having bought a pillow, a single pillow, for $200.

Experts at this include such businesses as MacKenzie-Childs, which began life with a pair of fey potters, Victoria and Richard MacKenzie-Childs, who developed a formula for majolica that didn’t chip and could be put into the microwave, oven and dishwasher.

They used an old dairy farm in Aurora, NY as their studio and eventually opened an especially froofy shop on Madison Avenue, filled with black-and-white checkerboard teapots, little ceramic knobs, plates with fluted rims, pastel cups and saucers, and a chest with rabbit feet. Shoppers loved it, with its combination of childlike wonder and staggering prices. A majolica mug 25 years ago clocked in at $75. 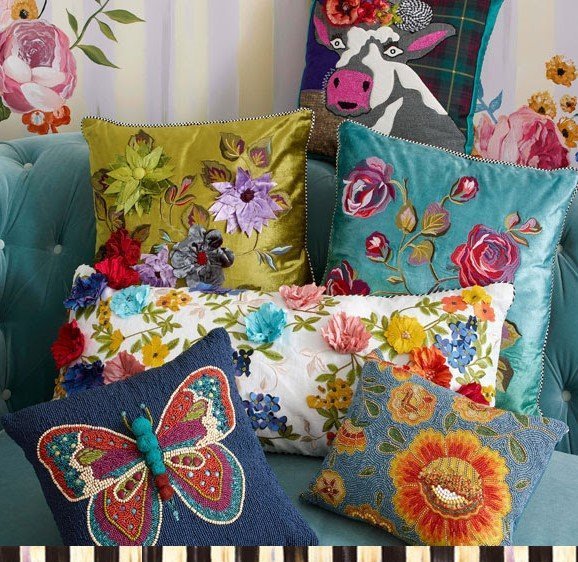 The founders are no longer with the company, a common story, but their style and spirit remains. (As does their black-and-white checkerboard fixation, and their factory in Aurora, NY.)

The pillows shown above are part of Mackenzie-Childs’ Flower Power line, on offer starting this month. It also includes a line of flower-appliqued pillows that would dress up a guest bed, but would not be very practical outdoors. 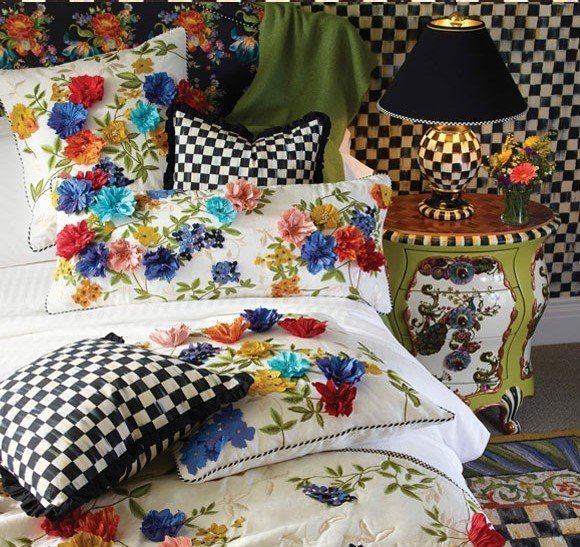 The MacKenzie-Childs pricing runs to $4,995 for the outdoor love seat below, including the Wood Iris cushion, covered in Sunbrella fabric. The Wood Iris pillow, however, is $495 extra.

The love seat is made of something called plastic wicker. 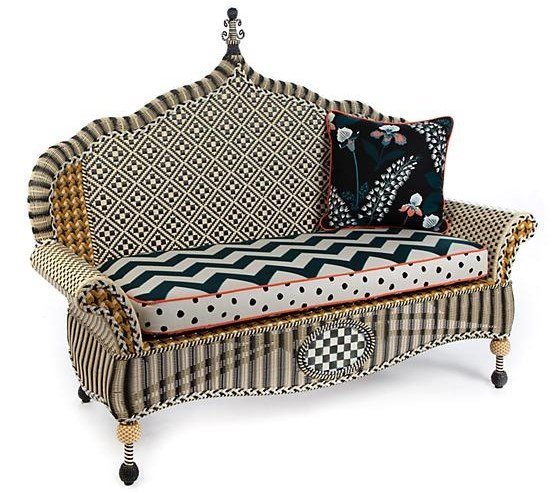 That would definitely be taking things to the high end, although I would not recommend putting plastic wicker anywhere near a fire pit.

In fact, wouldn’t a simple bench be just as nice with a couple of old pillows and a big quilt for a chilly night.

Even an old picnic table with a couple of kerosene lanterns would look fantastic on top of this 5-by-8 foot $95 Tropicana outdoor rug from Hayneedle. 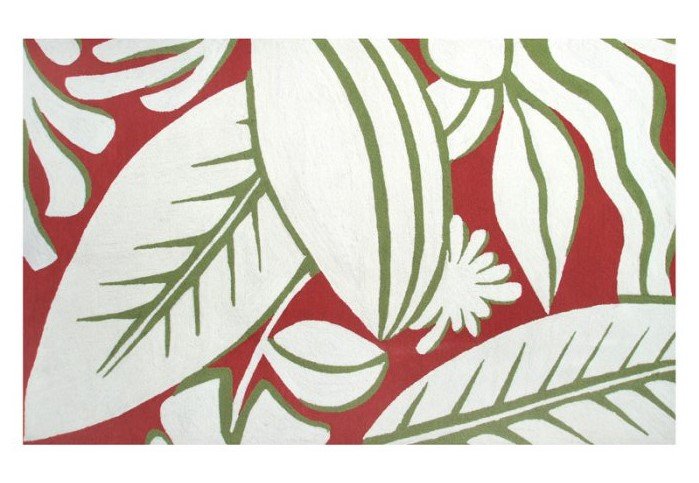 It’s all a matter of attitude, time of year, and perhaps enough white-wine sangria. — Linda Lee

Linda Lee is a former editor and writer at The New York Times, where she was deputy editor of the House & Home section and wrote frequently for Sunday Styles.