The Duchess of Cambridge Does It Again: Back to Nature II

For those who missed the nature-inspired garden at the Chelsea Flower Show in May [see below], Catherine, the Duchess of Cambridge and her advisers, the landscape architects Davies White, have doubled the size and come back for another go. 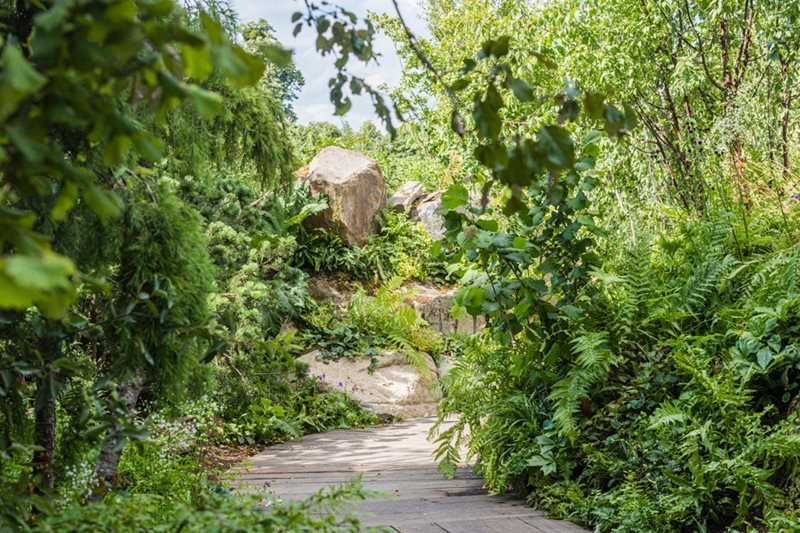 This time it is at the Royal Horticultural Society Hampton Court Palace Garden Festival, which runs from July 2 through July 7. Up to two children under the age of 16 are admitted free of charge to the show with one paying adult (about $50 in advance for a full day).

The Duchess and her family invited school children from Evelina Children’s Hospital, Action for Children UK and Place2Be,  a children’s mental health charity, to a preview of the Back to Nature garden, above. 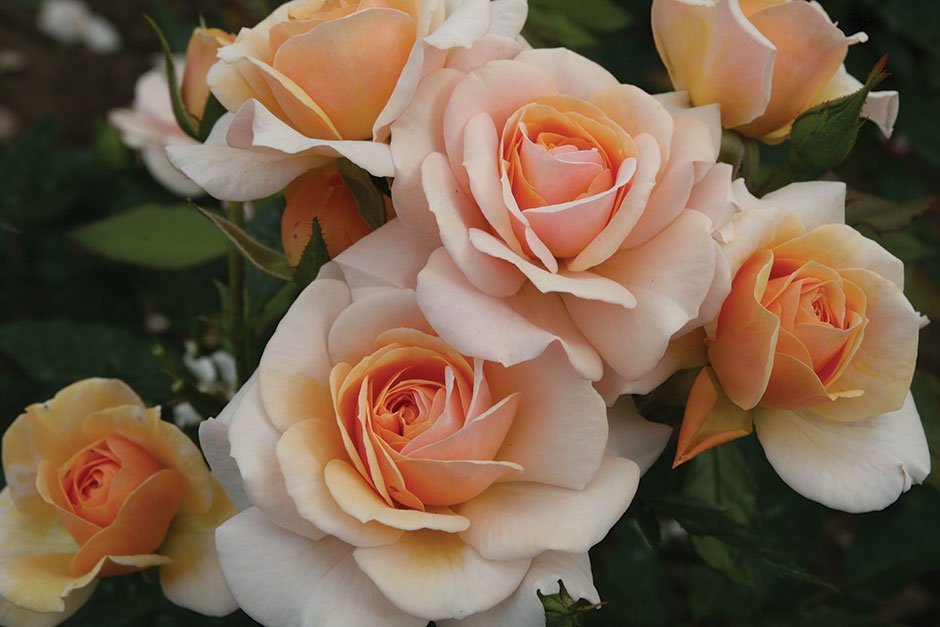 During the run of the show, while gardenistas are rushing inside to see the 2020 Rose of the Year, Sweet Honey Kormecaso, a creamy apricot floribunda that looks sculpted out of buttercream frosting, harried parents towing younger children will be heading for the Duchess’s rambunctious play garden.

It has a tree house, as did the garden at the Chelsea Flower Show, and a hollow log. But this garden has more room to stretch out, a bug hotel, a pond where families can paddle about and meadows filled with red clover, ox-eye daisy, the common spotted orchid and other wild flowers attractive to bees including meadow buttercup.

Somewhere between the camo netting and the rolling hill, even 14-year-old boys might find that a flower show can be fun.

Below, the Duchess of Cambridge, her younger son, Prince Louis, and her husband, Prince William, admire some of the flowers. Notice the butterfly in front of William’s left shoulder.

The garden invites families to explore the wonders of nature. 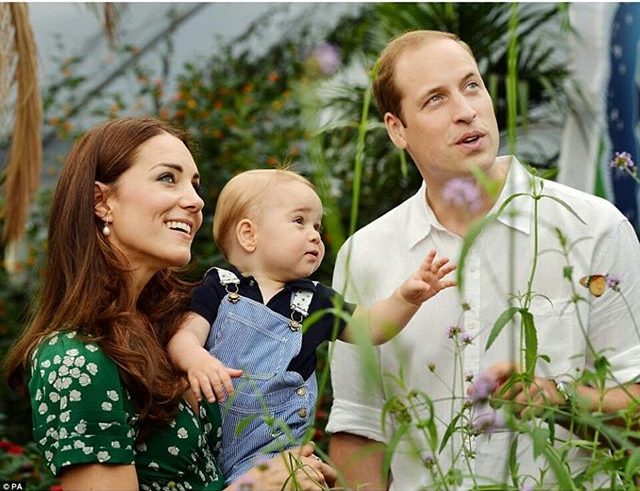 The Duchess of Cambridge Swings at the Chelsea Flower Show

Let others at the Chelsea Flower show prune their primula, and pamper their new Cherry Burst pinks, the crowds will head for the Duchess of Cambridge’s Back to Nature Garden, complete with a rope swing that the Duchess and her 4-year-old daughter, Charlotte, tried out on Saturday, May 18, three days before the opening. 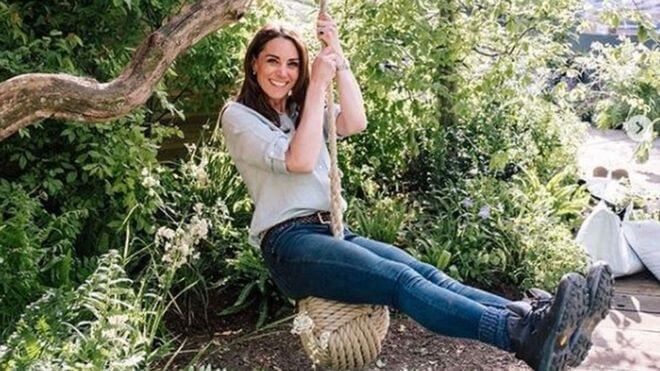 The Duchess of Cambridge tries the rope swing at the Chelsea Flower Show
Credit: Matt Porteous

Because people who consider themselves “palace watchers” know these things, Harper’s Bazaar breathlessly reports that Princess Charlotte is wearing a floral dress by Rachel Riley. 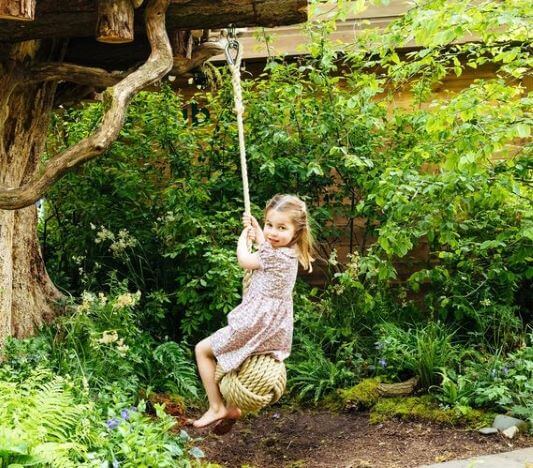 The Back to Nature Garden was designed with the expert advice of  the landscape architects Andrée Davies and Adam White, along with the Royal Horticultural Society. It was a brilliant collaboration.

Davies White is renown for its playful public spaces that are specifically designed to engage children. Some of their ideas are familiar from the children’s zoo at the Bronx Zoo: giant spider webs, hollow logs, a chance for children to put themselves into the animal’s place. 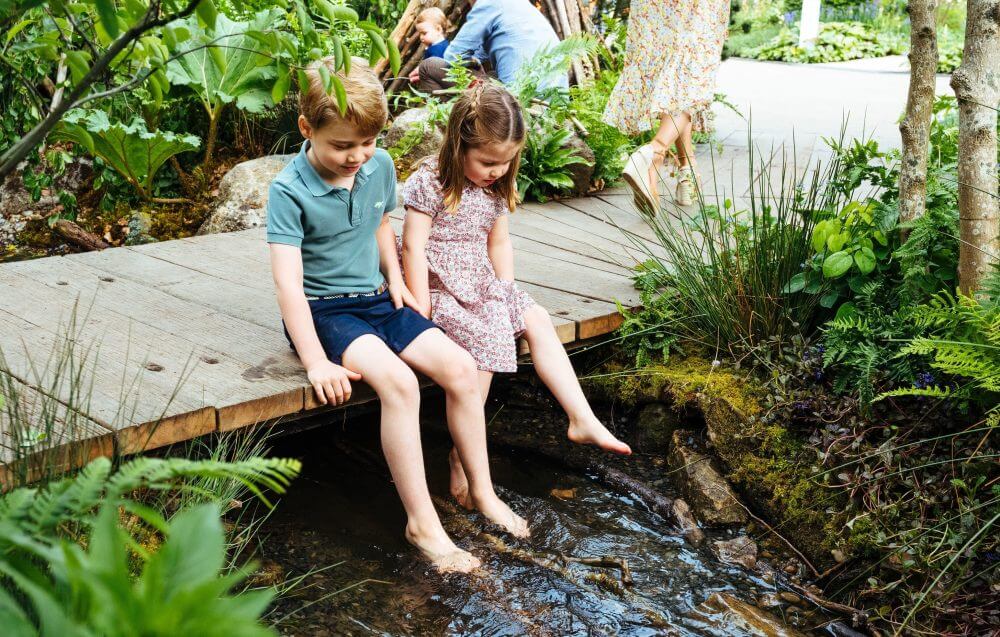 The Duchess’s Back to Nature Garden emphasizes the mindful exploration of nature, a keen interest in the Japanese concept of “nature bathing,” while also offering a rope-ball swing, a hollow log, stepping stones, a chance to climb up into a rustic “den,” “incredible edibles,” tree stumps and what is described as a campfire, although it is not clear if the campfire will be lit.

She told the BBC: “I really feel that nature and being interactive outdoors has huge benefits on our physical and mental well-being, particularly for young children.”

The forest landscape will contains bits of twigs, leaves and pine cones collected by the minor-age Cambridges – Prince George, 5, Princess Charlotte, and Prince Louis, now 13 months – from the royal home at Anmer Hall.

For those not up on Cambridge residences: They do not live in Cambridge. They have two homes: One in Kensington Palace and a weekend retreat in Amner Hall, a wedding gift from the Queen; it is in Norfolk, part of the Queen’s 20,000-acre Sandringham estate. Royals like to keep family close, relatively speaking. 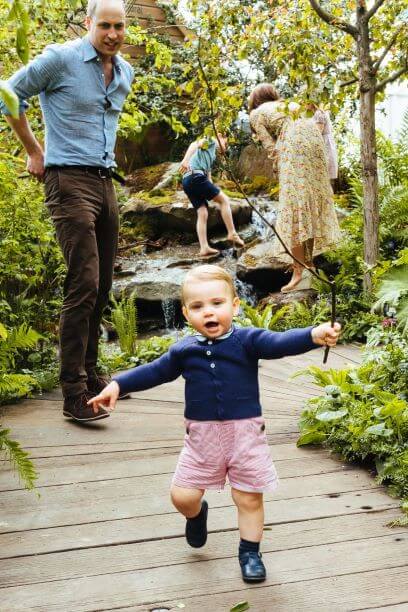 Back to the Royal Horticultural Show, which begins May 21, and which Jill Brooke is attending.

It is customary for a royal to take part in the Royal Horticulture Show. Prince Charles has often been involved, but most palace watchers agree that the Duchess of Cambridge is more fun. 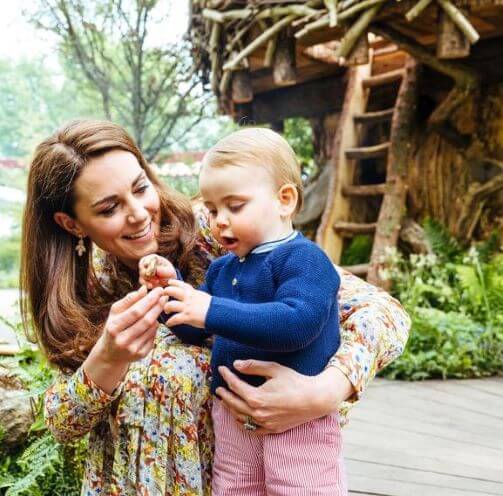 The Duchess of Cambridge and Prince Louis
Credit: Matt Porteous

We don’t recognize the dress (Liberty of London?) or the earrings, but the ring the Duchess of Cambridge is wearing for the outing into the Back to Nature Garden is familiar: Princess Diana’s sapphire engagement ring, a 12 carat oval Ceylon sapphire surrounded by 14 solitaire diamonds.

Prince William gave it to Kate as her engagement ring.

See our other coverage of the Chelsea Flower Show

RHS Florist of the Year, and a Flower Crown Inspired by Queen Victoria

Primrose Hall Exposes More Than the Beauty of Peonies