At Ascot, It Doesn’t Have To Be Ladies’ Day To Be Ladylike 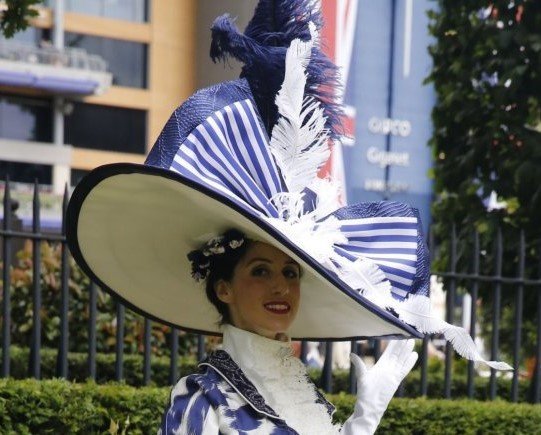 According to the strict rules of the Royal Enclosure at Ascot, it is hard not to be ladylike. There are rules for attire, for men and women, that do not apply in the Queen Anne Enclosure and the Village Enclosure. Only the Windsor Enclosure does not require women to wear hats and will allow picnics.

The notion of attending the races at Ascot, which began this year on June 17 and ends on June 22, seems to split female attendees into two categories. And spurs those who do not attend into a frenzy of Royal-watching and fashion-consciousness. As well as catty opinions about Princess Beatrice and Princess Eugenie. 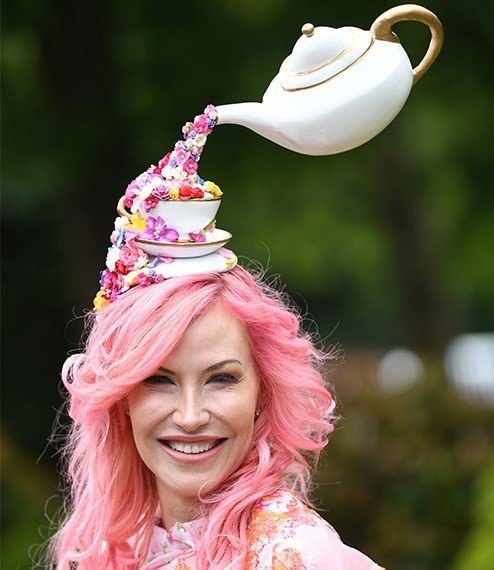 There are those attendees who are compelled to camp it up, and wear the most outrageous outfits and hats possible, to épater les bourgeois. Shocking people can be such fun.  One great example is  the fun-loving Alexa Wolman, from Miami, Florida, above, who wore a teapot on her head that poured flowers.

And there are the women who either are invited, or hope (dream?) some day to be invited into the Royal Enclosure.

Let’s have a look at them.

A Glamorous Beauty Arrives on Day Four in a Lace Dress

Lady Kitty Spencer, niece of Princess Diana, attended the races on the fourth day, in the Royal Enclosure, of course. Here is a perfect example of the dress code. The sleeves are a modest length, no thin straps. Her cream lace dress, by Dolce & Gabbana, is the proper length: just above the knee or below. Note that many women wear ballerina-length dresses. 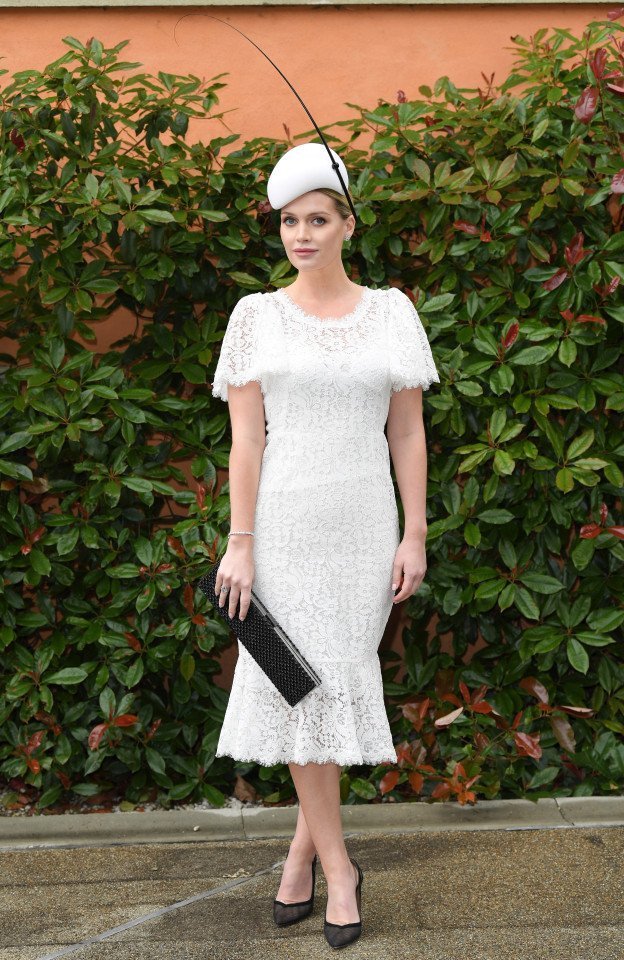 Most women wear spike heels, despite, this year, having to walk and stand while being photographed on water-logged grass, meaning they stand on their toes. You think being in glamorous circumstances, holding a champagne glass and smiling is easy?

The long black spike on her Philip Treacy hat, incidentally, required her to ride obliquely on her way to the races. Because of the rain, the top of her town car could not be opened.

The 2019 Trend Established by Kate, Duchess of Cambridge 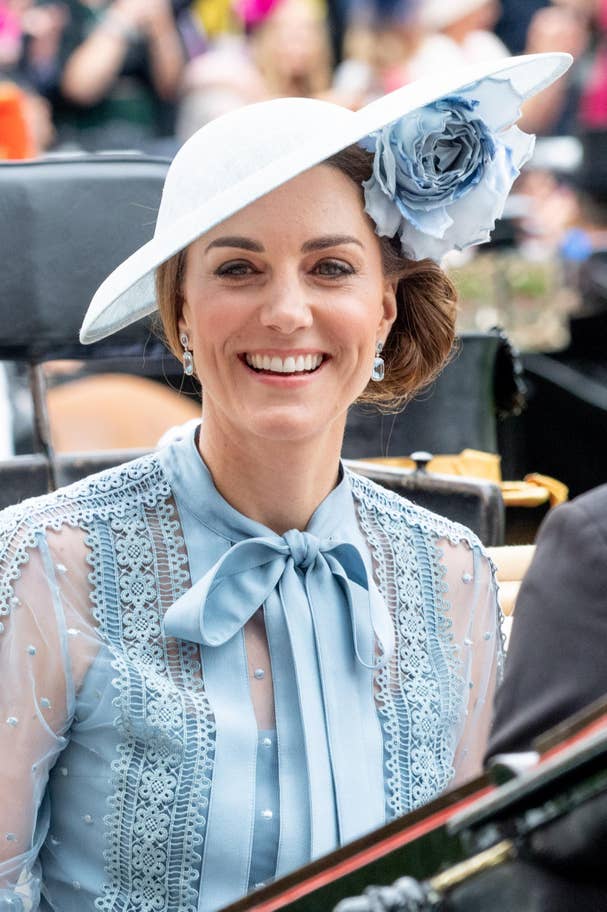 Thus came the idea: put flowers on the other side, under the hat.

Brilliant. It combines the modern angular look of the rakishly angled hat, with the sweetly romantic look of flowers in the hair. (It probably also helps anchor the hat better.)

Kate has worn such hats many times, most recently to watch the trooping of the guards with young Louis on her lap. It is obviously a flattering look. And sharp women, young and old, have rushed to their own milliners to follow suit, sometimes overdoing it. 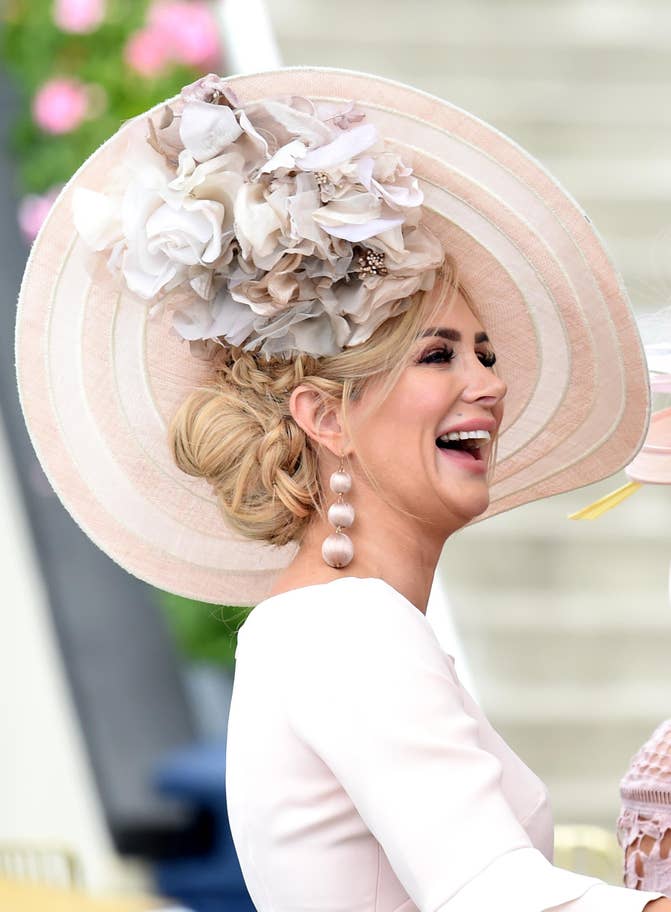 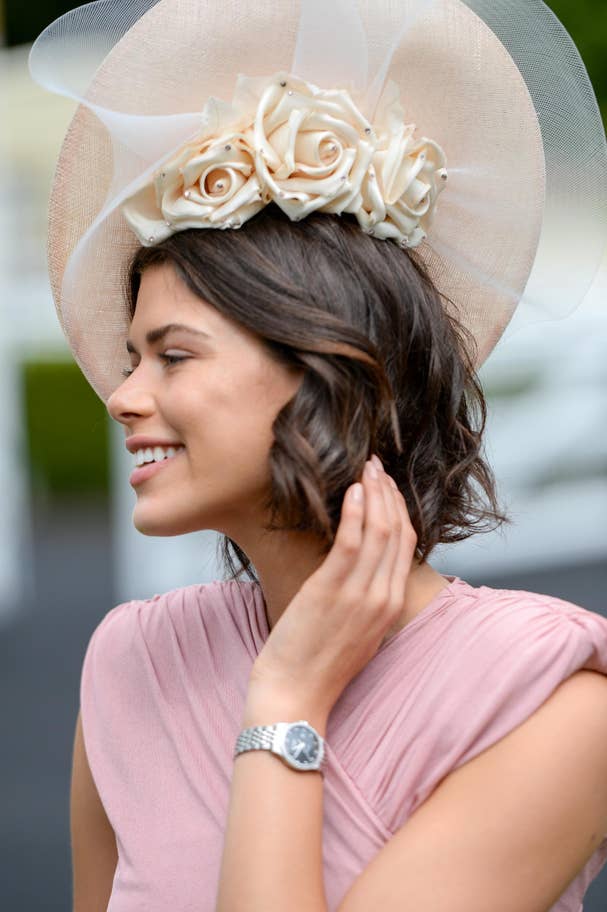 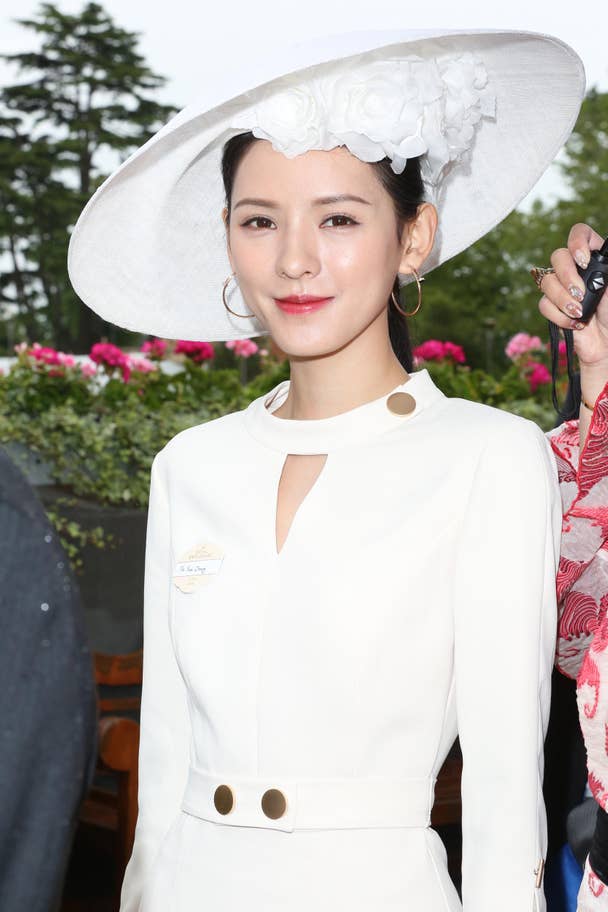 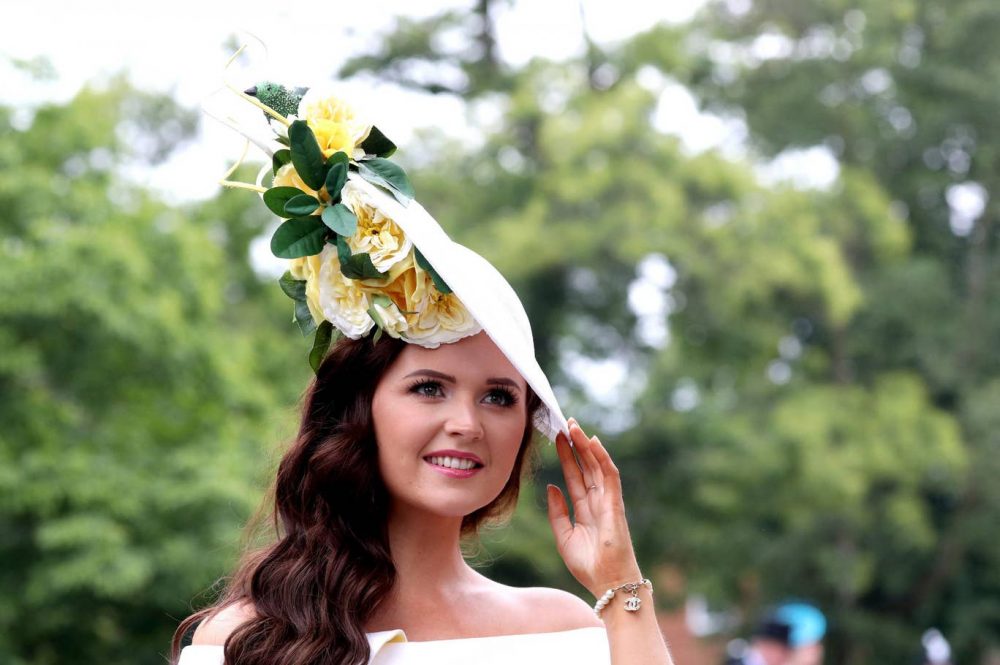 Flowers Were in Evidence on Dresses as Well

A bit more about the dress code. It might surprise you to learn that pants suits are allowed. However, in England they are never to be called “pants suits.” Pants there refer to underpants. Instead, they are called “trouser suits.” The jacket and trousers must be of identical material and color, and the trousers must reach the ankle. And jumpsuits – how 1970s! – are allowed, although they must also reach the ankle.

Strapless, halterneck and off-the-shoulder dresses are not allowed, of course. Perhaps the English have not conceived of anyone invited to the Royal Enclosure wearing a skirt that splits to show the thigh, because they don’t have a prohibition against that. One can be assured that the first time an American tries it, there will be.

Jackets and pashminas may be worn. But what is underneath, of course, still must follow the rules.

Thus we have women wearing lovely, flowing dresses, many of them with floral themes. 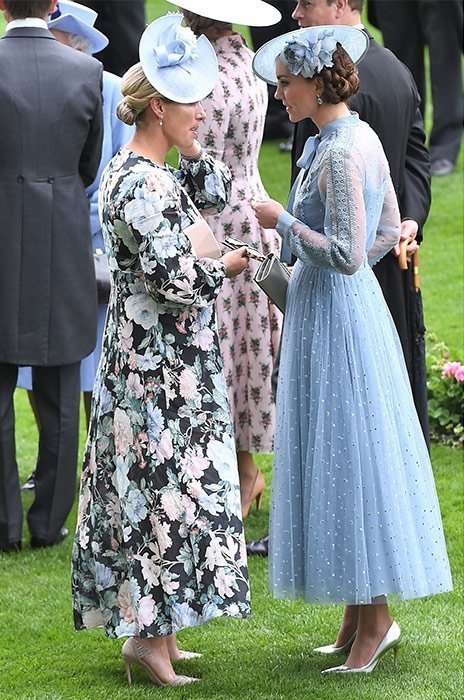 Above, Zara Tindall, in a matching tilted-hat-with-flowers-underneath and a strongly floral dress, speaks with Catherine, Duchess of Cambridge, wearing a lace dress by Elie Saab that has wide panels of flowers on the bodice, as seen up top. Both are standing lightly on their toes without the slightest sign of discomfort. Born Zara Anne Elizabeth Phillips, she is the eldest daughter of Princess Anne, and Queen Elizabeth’s granddaughter. She is also am equestrian, an Olympian and the mother of two children approximately the same age as Kate’s. Thus these two have much to talk about, even standing on soggy grass in high heels. 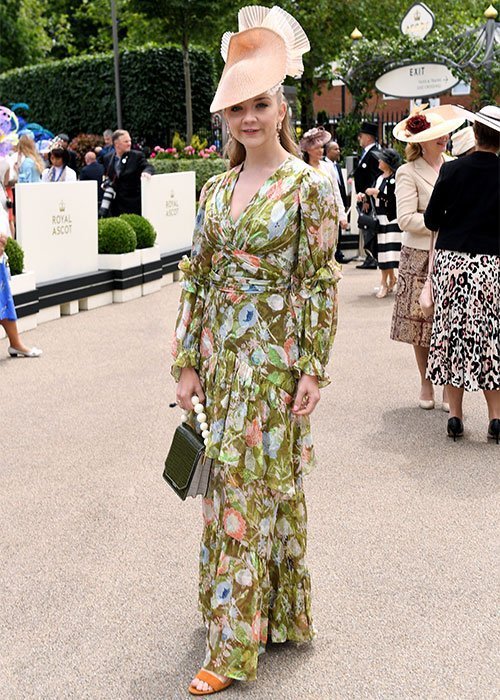 You cannot get more floral than this dress worn by Natalie Dorner, an actress in many British productions. Those in America may best recognize her as Margaery Tyrell on the HBO series “Game of Thrones,” a role she played from 2012 to 2014. Some might consider it a bit Victorian, as if made out of curtains, but still, it follows all the rules of ladylike dressing. 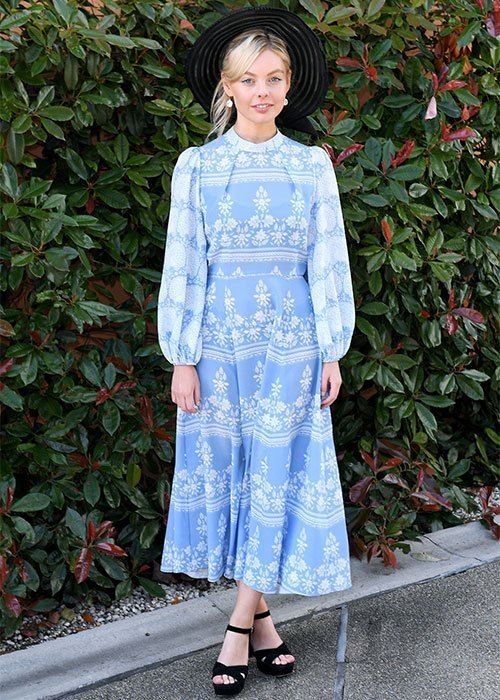 Nell Hudson’s blue dress is the very essence of ladylike innocence. It is not blatantly floral, but instead has abstracted floral imagery, in the manner of Indian or Persian patterns. Nell Hudson played Nancy Skerrett, Queen Victoria’s confidant and head dresser (before she left, and later died – spoiler – of cholera) in the BBC series “Victoria.” We can’t see what’s on her black hat. Let’s hope it was blue or yellow flowers.

And finally, here’s to the pioneering spirit of this young woman, who is identified as “Inga, from Glasgow School of the Arts,” apparently out to get attention at Ascot. And she succeeded. It seems likely she will have a future. We cannot predict if it will be on stage. As an artist. As a model. But this young lady is going somewhere. 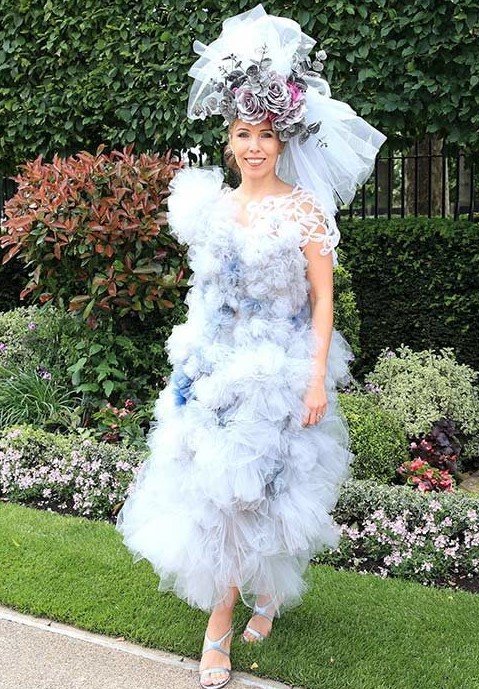