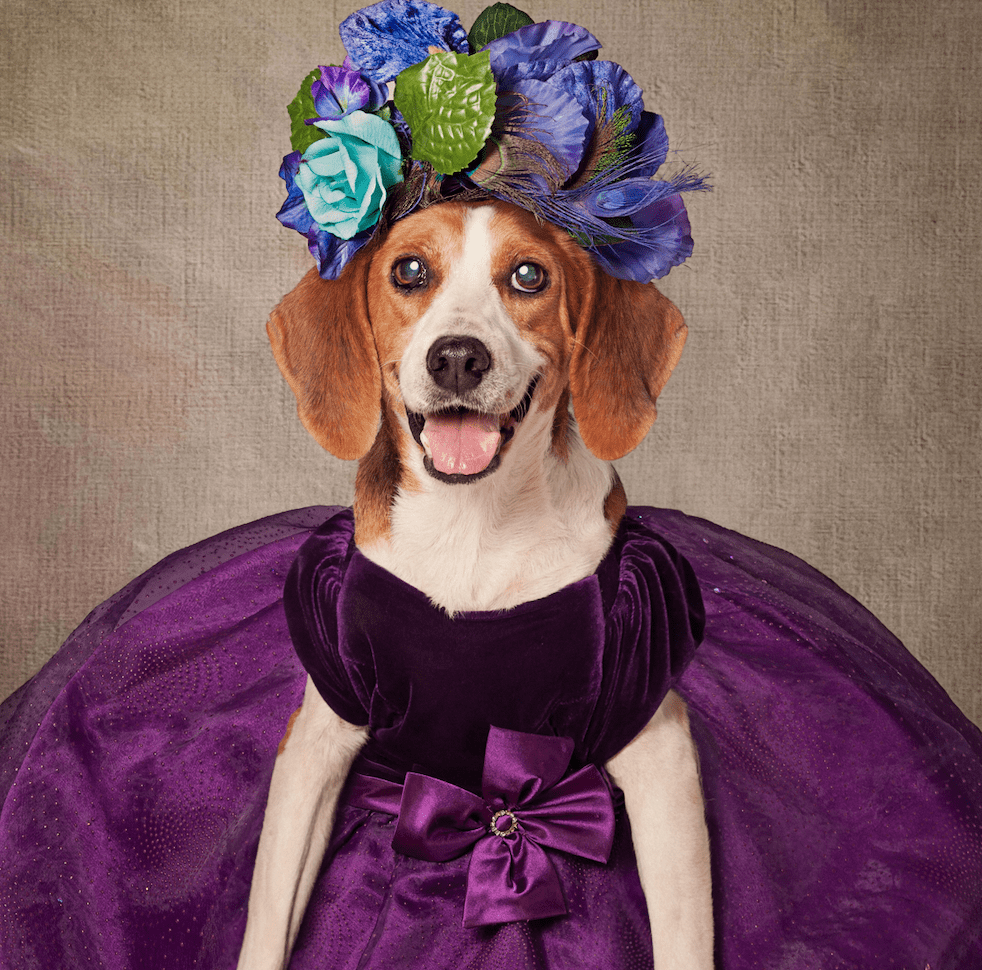 Some people dress up their pets for fun. Others do it for a good cause.

In 2016, photographer Tammy Swarek was confronted with the life-changing need to take care of her mother, suffering from Alzheimer’s disease.

Complicating matters, the working mom was already stretched taking care of her autistic son, Matthew. Taking pictures was her  “therapy” and now suddenly curtailed by the demands of managing her mom.

Watching TV with her one day,  she saw a heartbreaking ASPCA ad that changed her life.

“The shelter dogs looked like they were behind bars,” she recalls. “It was horribly depressing and sad. Then I thought, ‘That is the wrong vibe.’ What if I spin it and make it like they were designer dogs instead of jailbirds with mug shots.”

That was her aha moment.

Excitedly, Swarek called up her best friend, florist Tammy Michael, at her home in Arkansas and shared her idea.

There was another incentive to make this project work.

“I knew that unlike people, animals wouldn’t be mad if I couldn’t arrive at an appointment, skipped a day of work or was late,” she recalls. “It was a win-win.”

The do-gooder gals first went to thrift stores trying to find scraps to convert to pooch-like Pucci or Prada stunners.  But their designs weren’t exactly prize-winning.

In the spirit of the lottery, Swarek then reached out to New York-based TV costume designer Joan Kelly, after seeing a $3500 headdress that could be adapted for one of the rescue dogs.

“It was nothing we could afford,” laughs Swarek, looking back at her moxie. As luck would have it, Kelly was an animal advocate and agreed to send boxes of couture clothes – including that gorgeous headdress.

“I figured the worst thing she would say is no,” says Swarek. “Instead, she said, yes, yes, yes.” 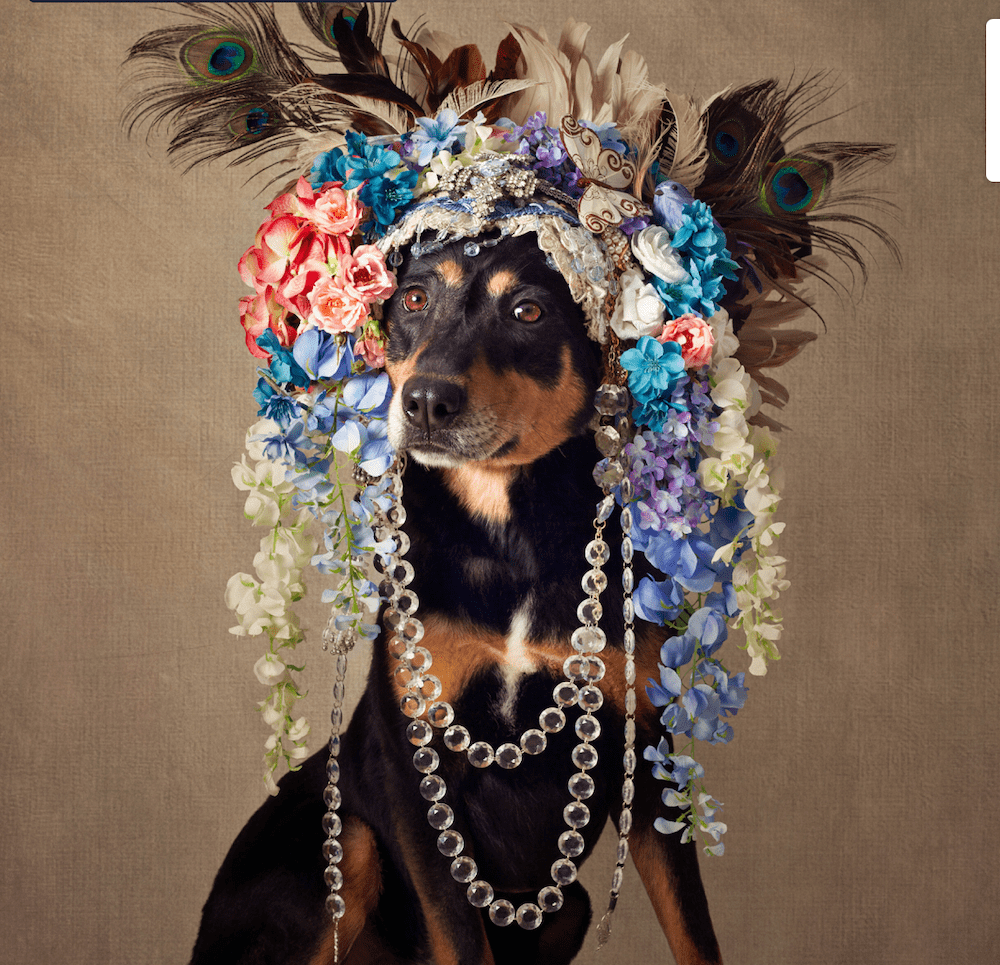 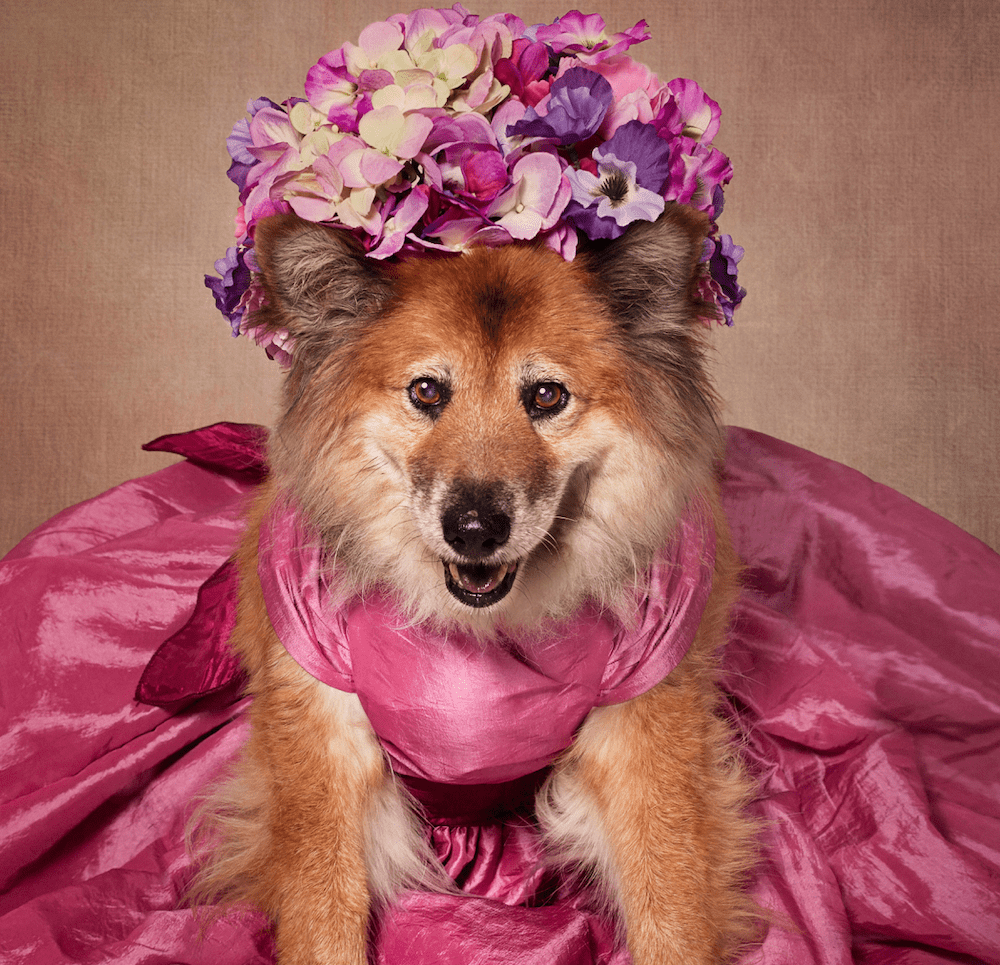 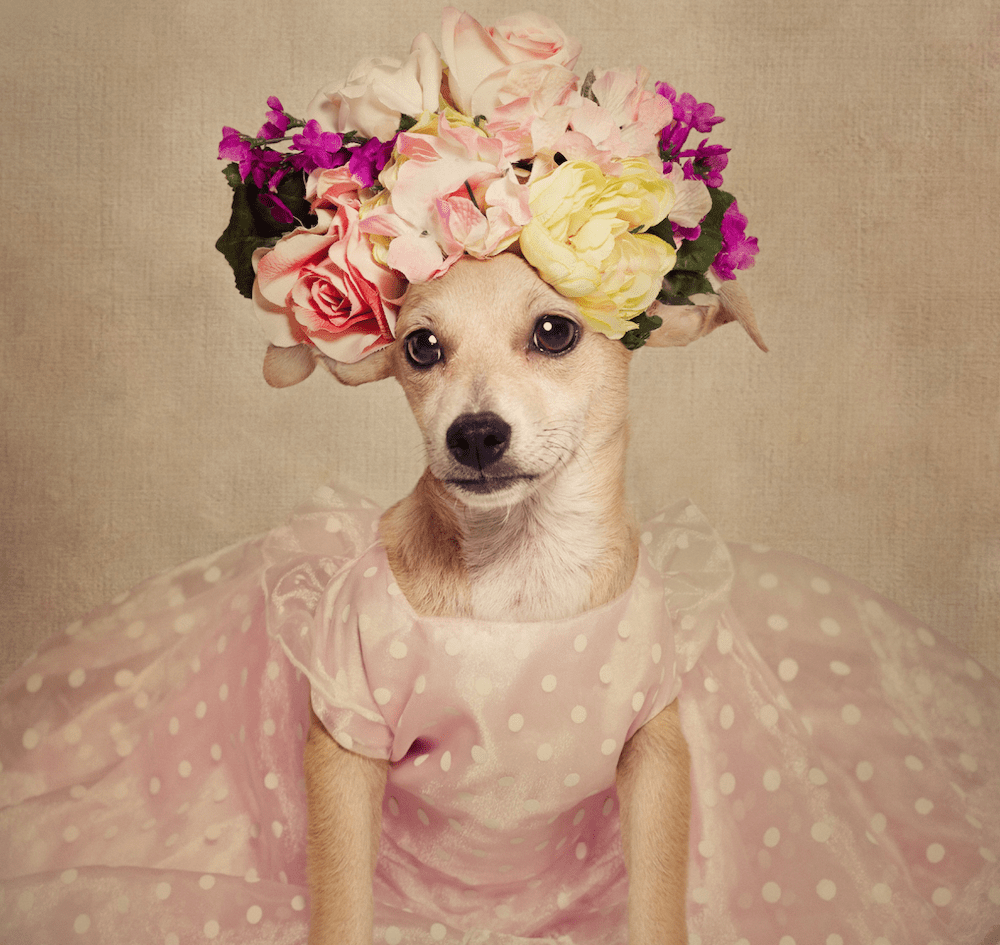 Soon after, she also reached out to Anthony Rubio – who creates specialized couture costumes for pets that are regularly seen at popular dog shows. Known as the canine couturier, Rubio, who donates a chunk of profits to animal shelters, also agreed to lend them doggy clothes.

Not surprisingly, these cute dog couture photos did cause an uptick on animal adoptions – as well as lots of media attention.

“These dog outfits are incredible,” says Jill Rappaport, the award-winning animal advocate and host of  Animal Planet’s “Dog Bowl.” “Any way you can shine a light on shelter animals as they wait for their forever homes is worth celebrating.”

Now Swarek’s photographs will be in Rubio’s upcoming book, “Anthony Rubio: Canine Couture” that will hit bookshelves this spring. Other photographers that have contributed to this book include David Allyon and – you guessed it – Robin Hagy who inspired Swarek early on.

“Her photos are captivating,” says Rubio, with palatable appreciation. We couldn’t agree more – especially how she uses florals for fashion. 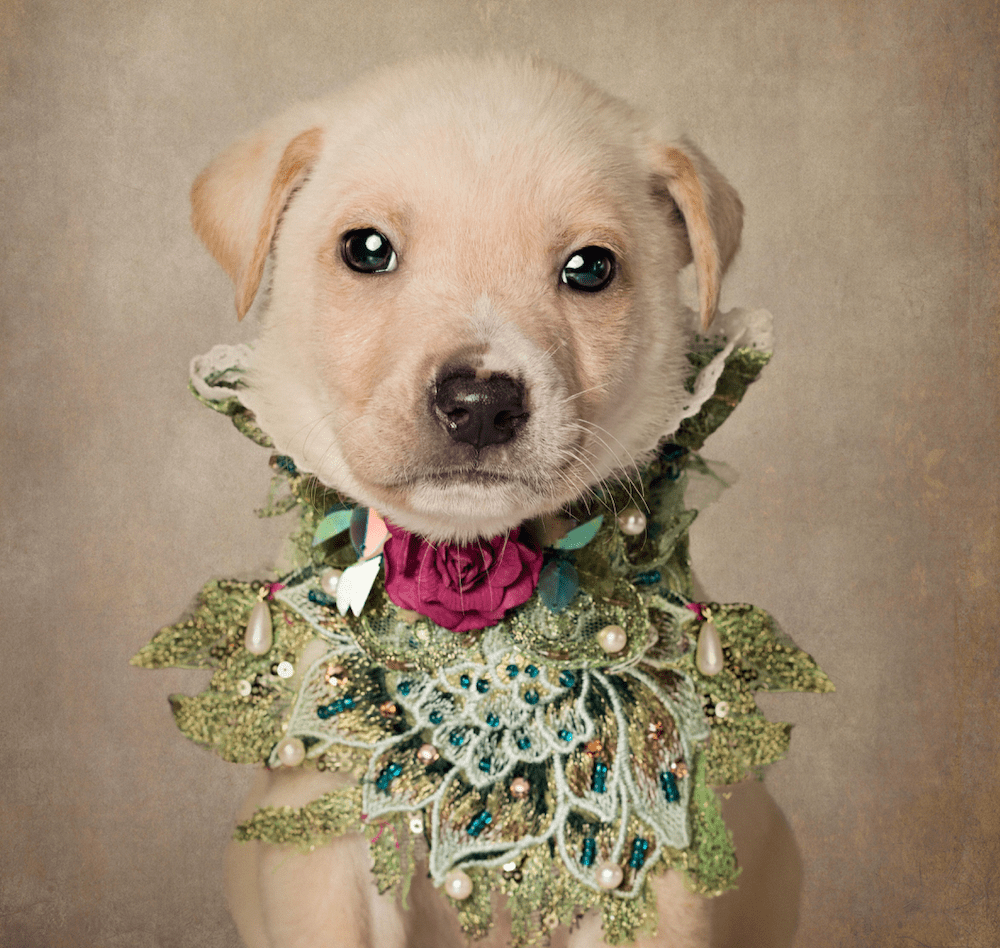 Swarek now takes photos of all types of pets-  and some people too.  However, she has a soft spot for shelter dogs.

“There’s a misconception that these dogs are damaged or were given up for bad behavior,” she adds.

In fact, Swarek confesses that the shelter dogs are actually easier to photograph. “They are so happy for the attention and getting out of the pen,” she observes. “They are the most well-behaved dogs and appreciate any treat.”

Since today is Dress Up Your Pet day, consider using florals as Rubio, Kelly and Swarek do with great flourish and style. Maybe also consider adopting a rescue dog too. 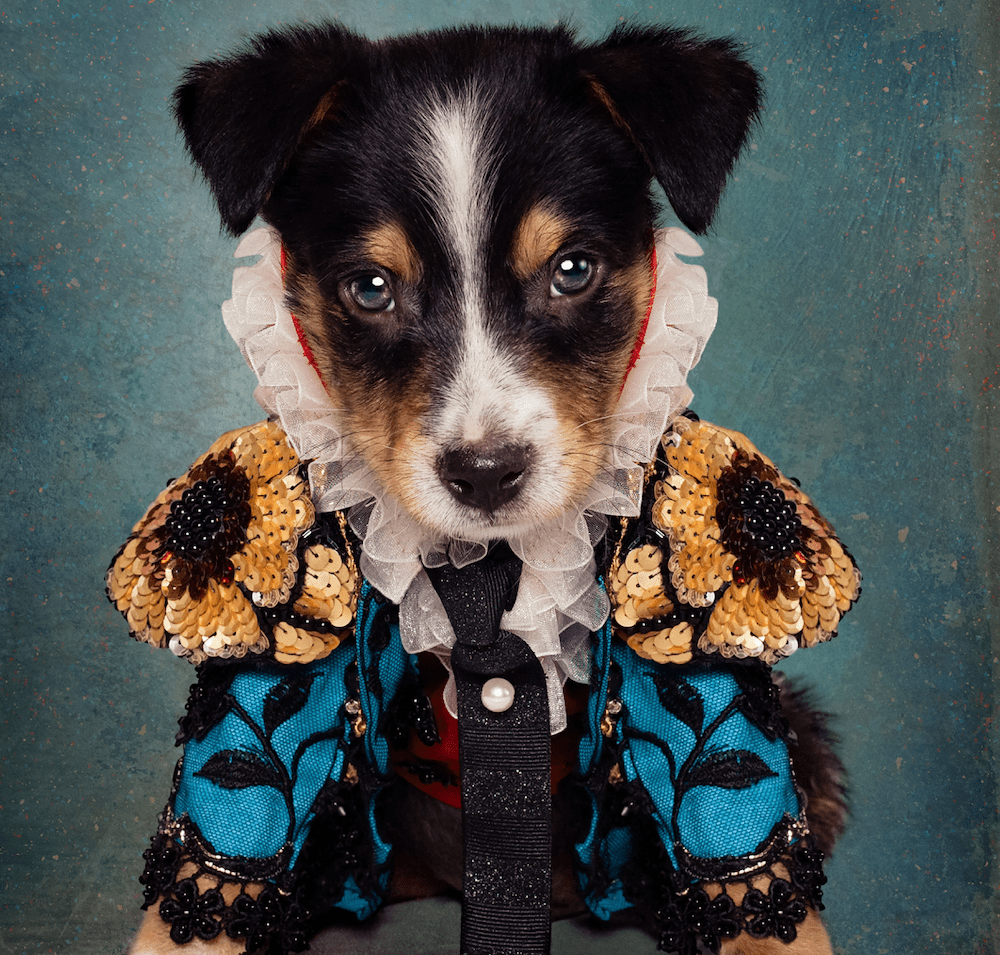