How did the Lyndhurst Mansion make its Gothic-styled architecture come alive?

They created the Lyndhurst Flower Show in early April to attract visitors to Tarrytown in Westchester county, New York, and invited more than a dozen regional florists to use their artistry to complement this historic residence. 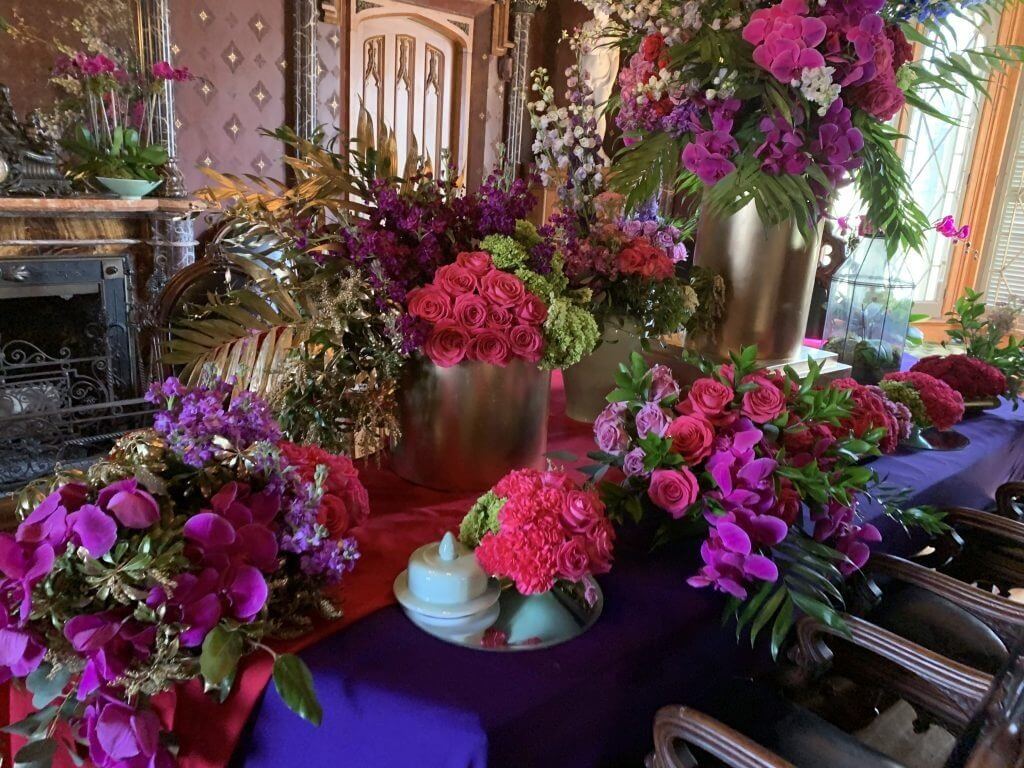 Finished in 1842 as the Knoll for a former Mayor of New York City, Lyndhurst was named by its second owner for the many linden trees lining its driveway. According to “River of Dreams,” by George G. Lankevich, the mansion’s architect, A.J. Davis, was “the most important architect working in the Hudson Valley during the 19th century.” The 19th century architectural critic William Pierson called Davis’s mansion, “The most profoundly intelligent and provocative house to be built… since Thomas Jefferson’s Monticello.” 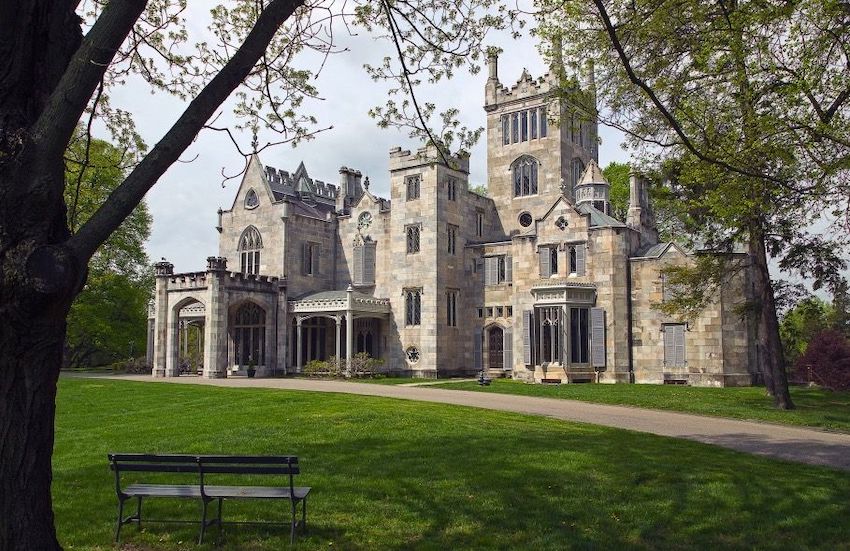 Davis began his career as an architectural illustrator and was renown for his watercolors of what he called his “American Bracketed” style of rural residences. These became known as the Gothic Revival style and dominated the 19th century in the region along with Greek Revival. This house, situated on 67 acres on the widest part of the lower Hudson River in Tarrytown, New York, was one of the first romantic retreats up river for Manhattan elites. As the Gilded Age arrived, these seasonal mansions sprang up along the Hudson River. When the robber baron Jay Gould owned it as a summer retreat, he commuted to Manhattan by yacht.

The Lyndhurst Flower Show is now in its fourth year. Howard Zar, the show’s executive director, says it reflects on “Lyndhurst’s unique identity as a place where its art and architecture was once considered new and contemporary.” Since the show was there only briefly, FlowerPowerWithJill is bringing you a detailed look inside.

I particularly liked one of the dining rooms decorated in lush style by Peter Morello and Robert Sloop at Colonial Village Flowers in Scarsdale.

“Because railroad magnate Jay Gould was one of the owners, we used a lot of orchids because he had an orchid garden in his greenhouse,” said Morello, who also brought in a pink, purple-and-pink color palate since it was the Gould family’s favorites. 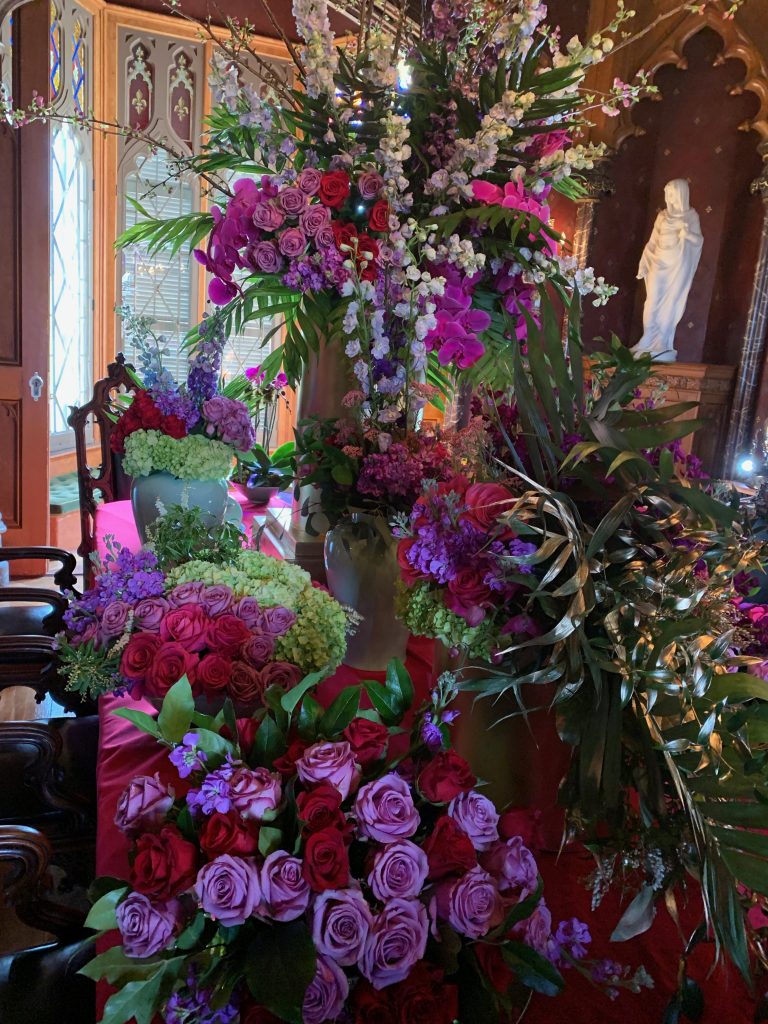 Included in this spectacular presentation were rare purple cattleya orchids – which had to be ordered weeks in advance.

Morello’s efforts to go modern with bold color was effective because it brightened an otherwise very dark room.

Ned Kelly & Company of Piedmont, New York, did a wonderful job in creating varying heights with these tulips which are challenging to arrange. Look at how they wrapped the tulips in twine and moss, which was both attractive and functional.  Kelly also created an interesting base with ranunculus and tulips and sprays of green.

Ned Kelly and Company also used red and pink roses to surround a clear vase, making the base a focus. Inside the vase were a handful of tulips standing at attention, a surprising effect. The roses and vase were on a tall brass table, and surrounding the table, standing on the floor were small umbrella-like stands, each filled with tulips, as if they were audience members standing around looking up at the roses. It’s another example of how you can use vases and surprising items to create floral displays, especially in hallways. 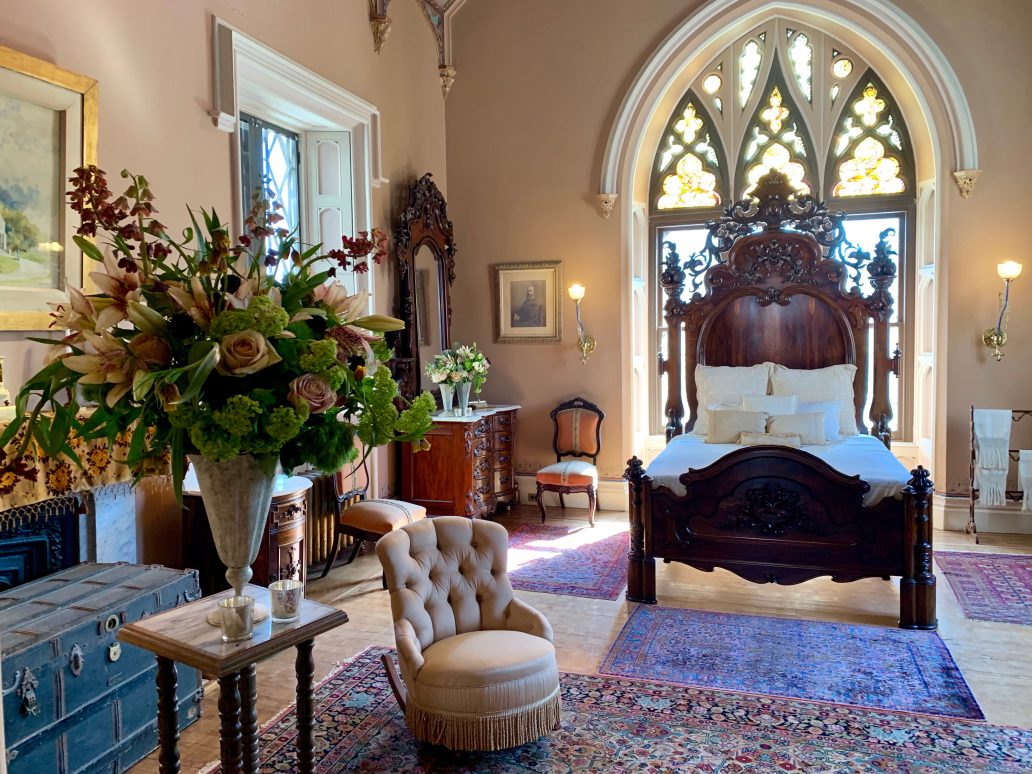 For the staterooms, above and below, Priscilla Schaefer of Glorimundi and Gerald Palumbo and Miko Akasaka from Seasons on the Hudson used traditional arrangements with colors that matched the interiors.  Palumbo and Akasaka’s forsythias were a bold addition since the tall branches matched the sparkles in the ceiling design. 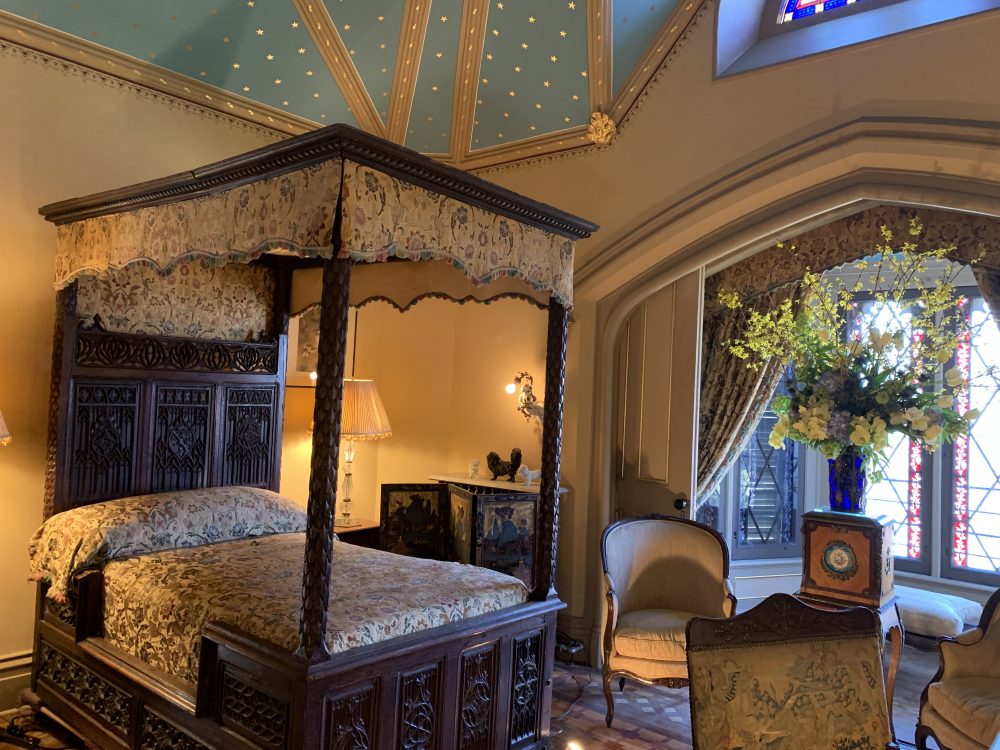 Deborah Hunter of Worship Luxury added a twist to the bathroom. Aside from putting a modern vase on an antique scale with creamy calla lilies and pale pink orchids, she also added a flower arrangement inside the tub. What a great idea. Take a bath and smell fragrant flowers. I may have to try that. 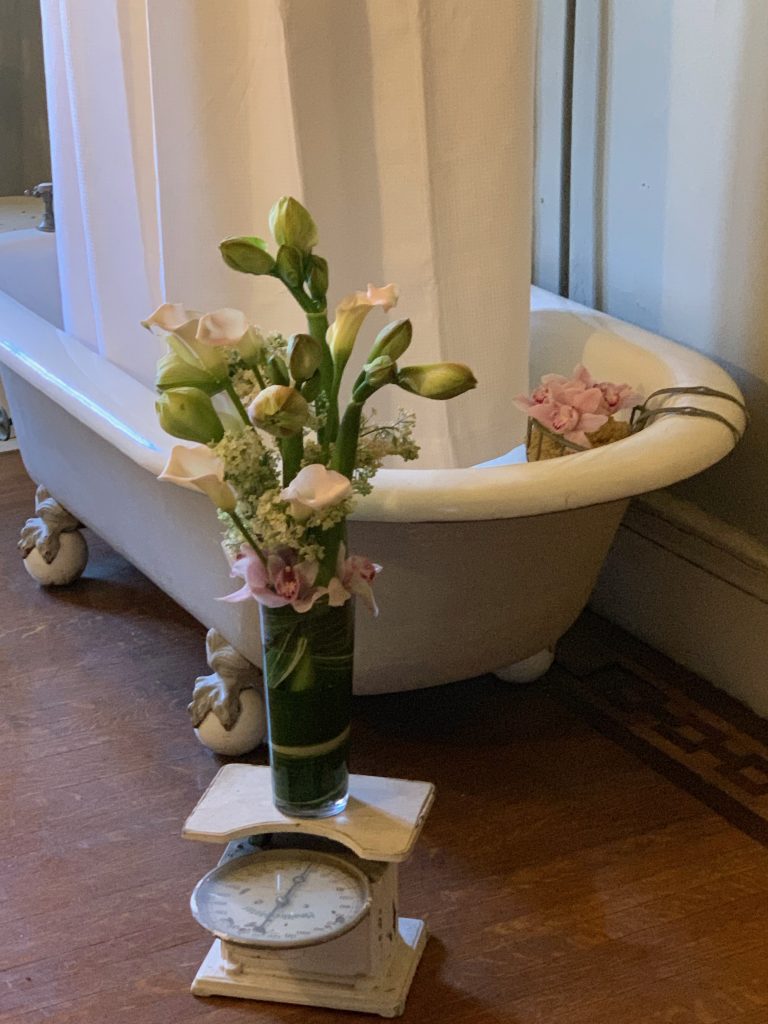 In the main reception room, designed to ooh and ah, Joshua Werber created mannequins of the era with hats made of flowers. One of them had a Medusa feel but made the overall effect compelling. Werber’s choices were both interesting and enticing because he merged the past and modern so effectively. His choices of flowers were unexpected but alluring. 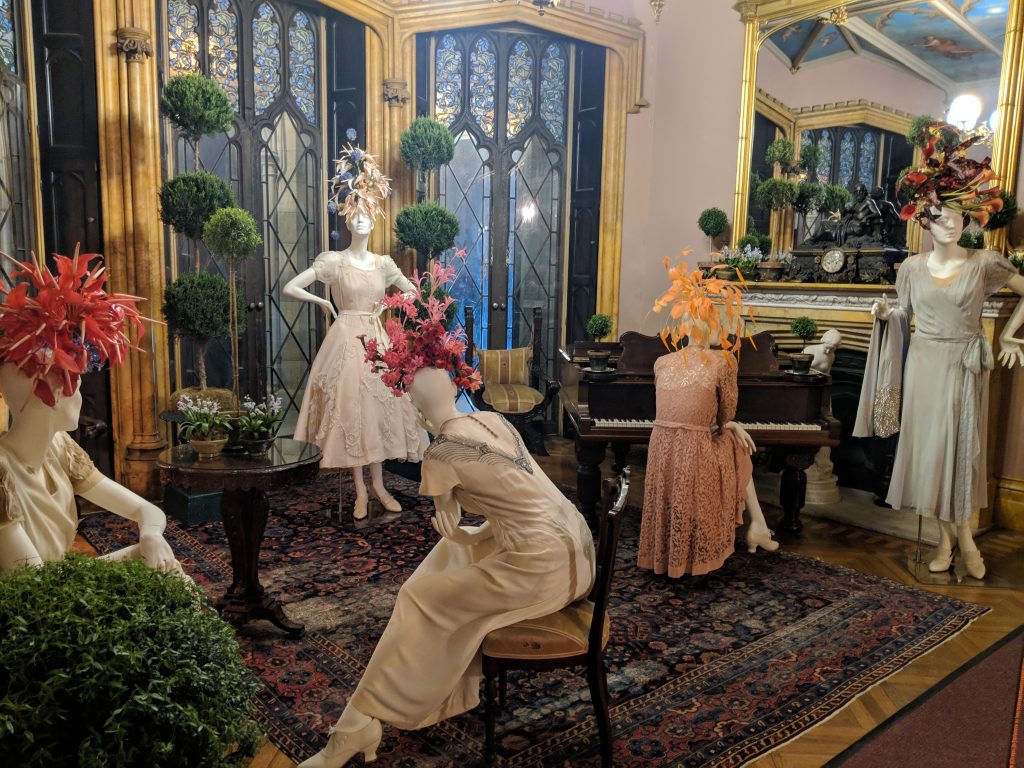 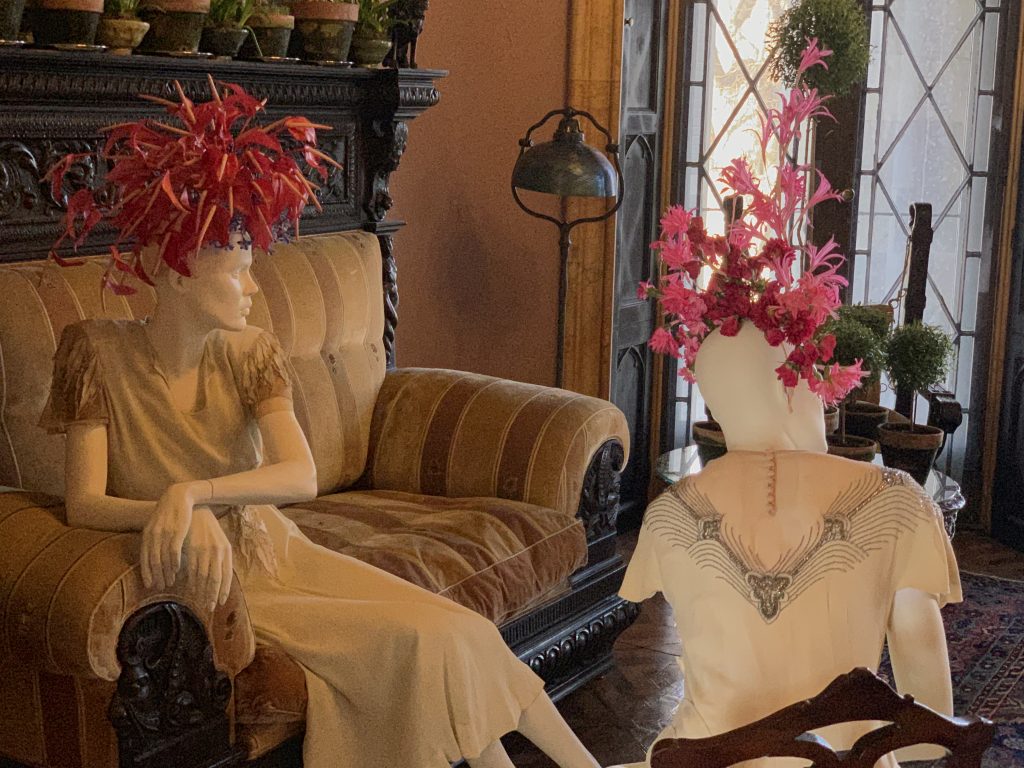 I was a bit disappointed in the arrangement of Arcadia Floral from Mamaroneck. The shop creates architectural delights. This Lyndhurst arrangement, however, needed more color. Even though the team uses branches and greens in inventive ways, this was too muted in comparison to the exuberant blooms everywhere else.

What didn’t disappoint was the intricate and cohesive color palate of Minoo Hersini of Au Ciel. Her butterfly ranunculus took my breath away in their subtlety of pale pink mixed with a rust shade on the color wheel. Called Theseus, her shop says it is originally from Japan but a New Jersey greenhouse now creates them. Her choice of not too tightly connecting the flowers gave it an earthy but elegant look.

Furthermore, she made the displays of each table setting the more vibrant focal point and then brought some of that bright color into the centerpiece vase. An added treat was how she used cut vegetables and fruits to add to the overall display – something I always do and recommend. Pomegranate and blood oranges are great accessories to flowers for tables.

The floral tablecloth was such a delight to see.  Artists often start with one piece and then work their magic around it. The colors of the tablecloth blend perfectly into the centerpiece. The orange ranunculus brightens the gold and brown tones and the pale anemones complement the base of the tablecloth. Notice how the plates are of different patterns.

Millennials now prefer to mix and match and this choice adds to the modernity. When you keep in a perfect color wheel, you can have different patterns working together to create a beautiful and dramatic effect. 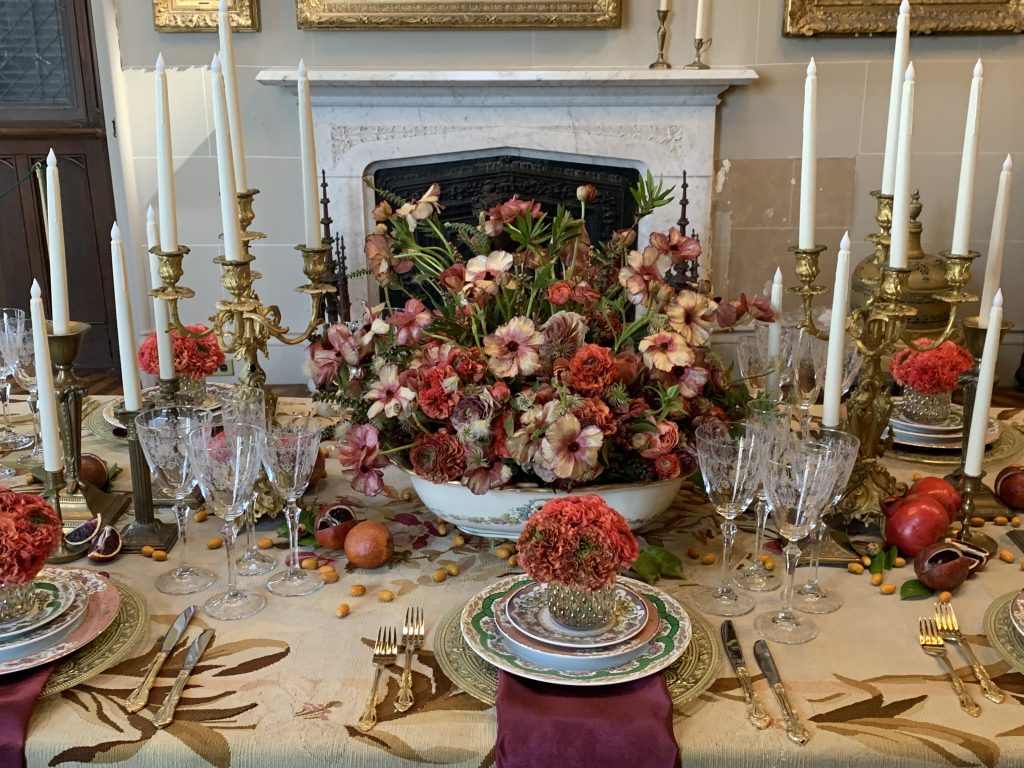 The flower show was the weekend of April 7th but the mansion offers many other events throughout the year, including a symposium on April 28 on Mansions of the Gilded Age.

The Garden Club of Irvington-on-Hudson, as well as the New York Fern Society, participated in the Lyndhurst Flower Show and collectively they created an event that continues to grow in popularity. – Jill Brooke

Check out Jill’s video coverage of the Lindenhurst Mansion flower show below, and if you’re looking for other floral events, destinations or festivals, be sure to explore our guide to seasonal floral events!