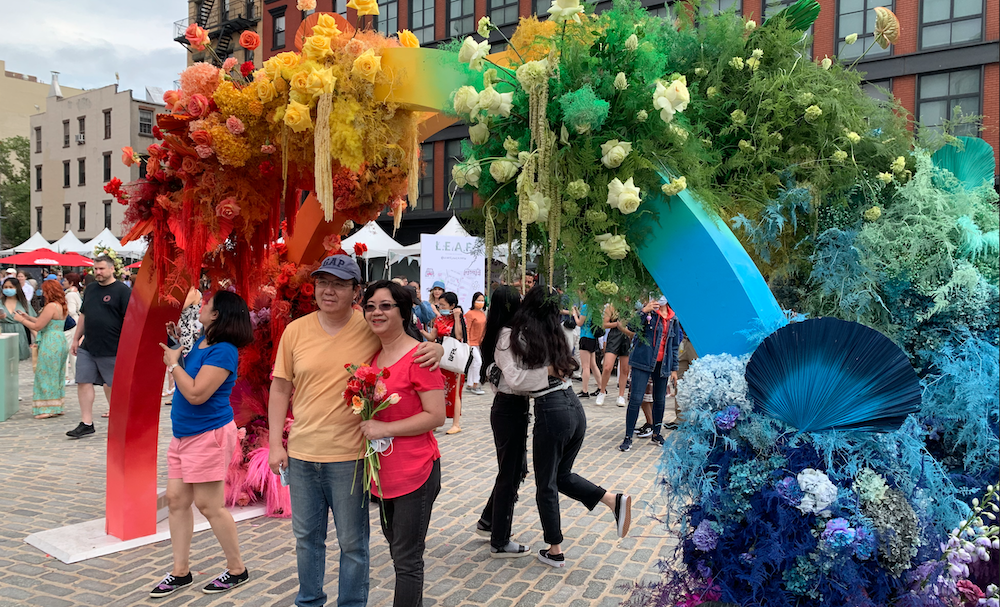 There were over a million blooms and a million smiles at the first L.E.A.F. flower festival held in New York this past weekend.

People brought their friends, their children and even their dogs to smile in amazement at the 100 installations scattered throughout the Meatpacking District of New York. 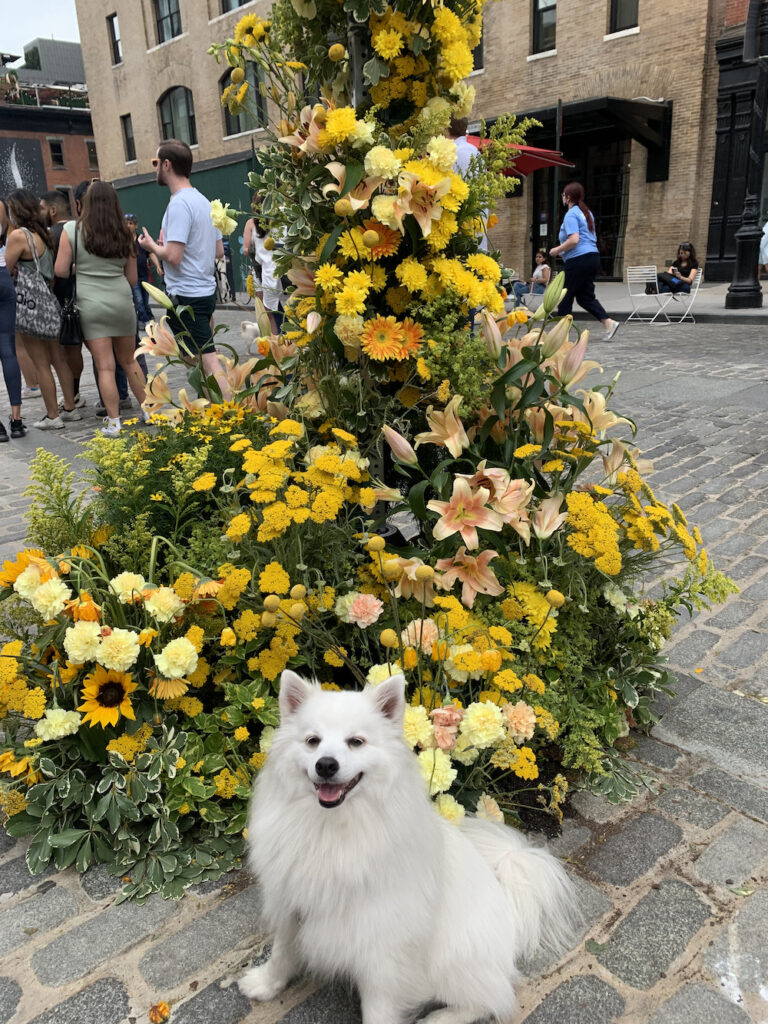 One of those adorable kids belonged to founder Moira Breslin, whose little boy Billy Hugh –  was named after her Irish grandfather Hugh who inspired her love of flora.

“We’re so proud that we started this summer festival in New York and made the neighborhood bloom and people are loving it,” says Breslin, who watched with pure pride and delight as crowds just roamed the streets creating Instagram moments and treasured memories.

The owner of a marketing company, Breslin masterfully tied so many details together after launching this dream five years ago, inspired by the Chelsea Flower Show in London.

“The city was decimated by Covid and L.E.A.F. 2021 has shown the city is back and created a platform that showcased so much artistry,” he said. “This will be the first of many. Look at the joy on people’s faces.”

Among the popular installations was called Double Rainbow by East Olivia (above image) and was a popular photo op site as well as others. 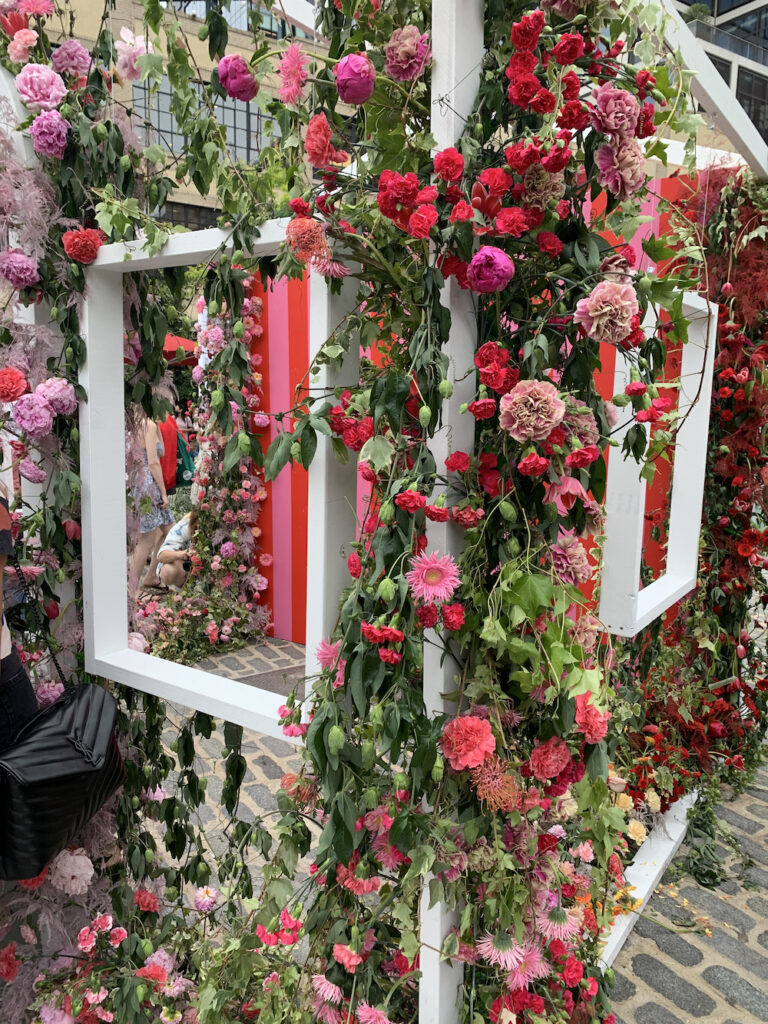 The trend of painted anthurium in a rainbow of pastels was also evident in several installations including Larkspur Botanicals. 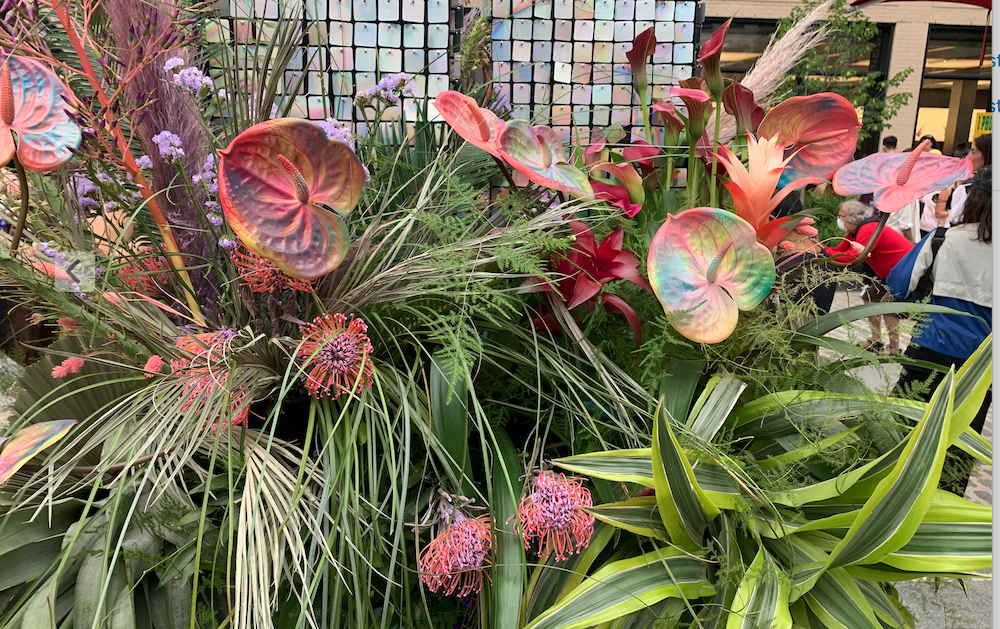 The Cloni Hanoi ranunculus and delicate sweet pea flowers at ohfleur made me gasp at its loveliness. 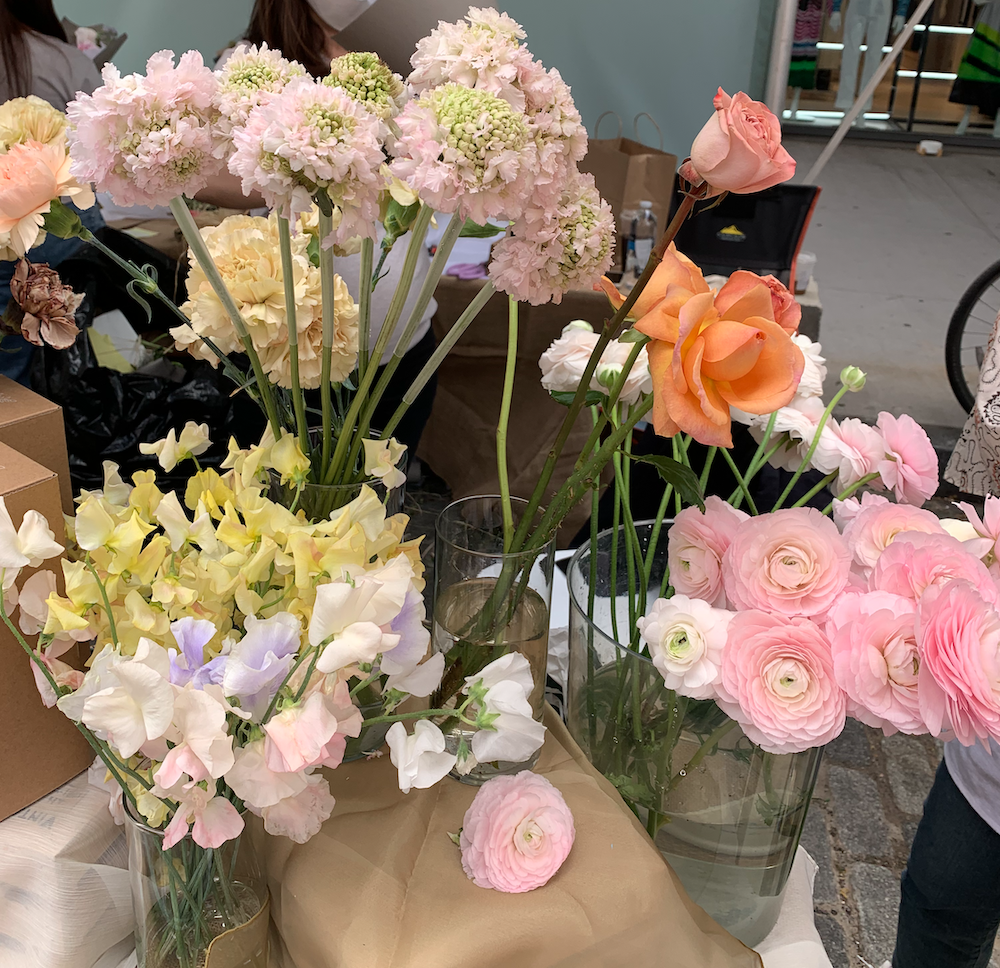 People also liked Alexis Denise’s stand where she created and educated people on the merits of “eucalyptus” stems to relieve “chest congestion” and calm allergies the natural way. Men were also encouraged to buy her fedora hats festooned with blooms. 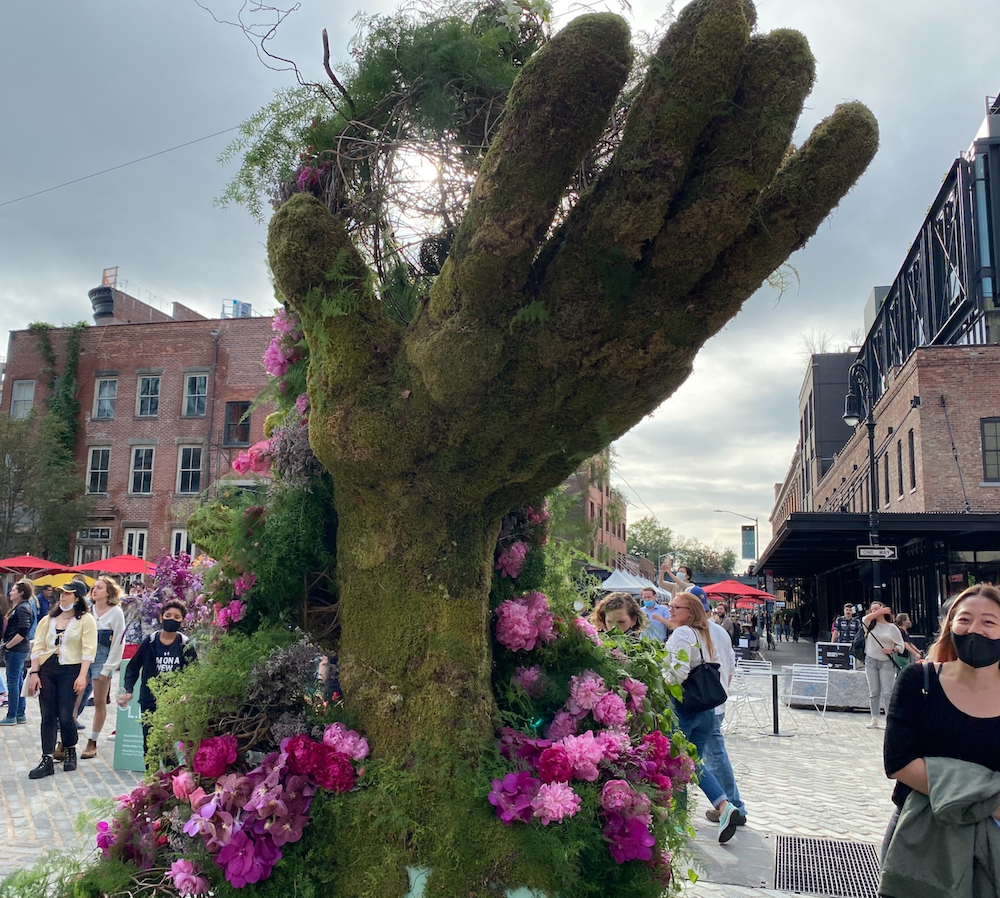 fleursBELLA’s Bella Meyer had a stand designed she said, to “bring an enchanted forest into an urban setting.”  The raspberry peonies were such an upbeat color and paired so well with the woodland theme.  Her helping hand sculpture was also one of my favorites and reflected the trend for more greenery and not as many flowers for a more natural enchanted forest look.  Her helping hand sculpture was a theme of what the essence of this whole festival was about. To uplift spirits and encourage resilience. 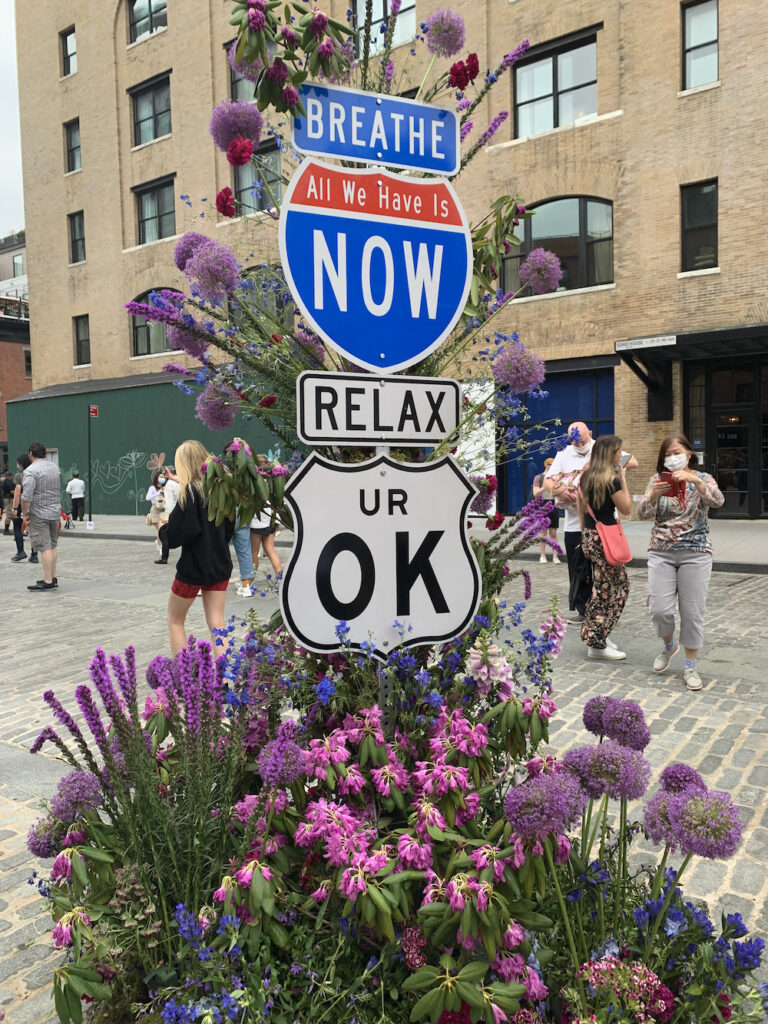 Lewis Miller, the Pied Piper of Petals and the grandmaster of the Flower Flash, created Instagram catnip with his floral installations beneath signs that spoke of the messages people were feeling – “Dream” and “Breathe Now, Relax,  UR  Ok.”

As these girls enthusiastically said, “Dream Big,” which indeed happened with glorious results from this inaugural L.E.A.F. festival   was achieved and people can’t wait for the next one. 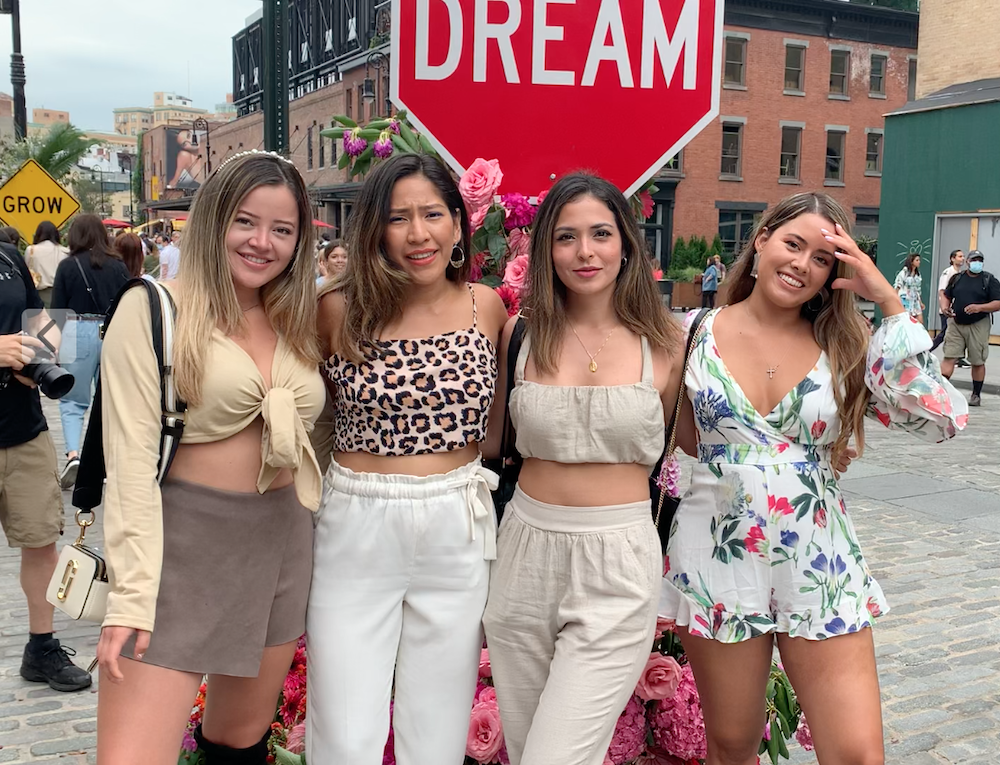