Jeff Koons’ Bouquet for Paris or a Self-Serving Gimmick?

Jeff Koons’ 41-foot-tall sculpture unveiled in early October is meant to honor the victims of the terrorist attack in November 2015 at the Bataclan nightclub and five other locations in Paris, which left 130 dead and 494 wounded.

Portentiously, Koons compares his work to the Statue of Liberty, a return gesture from America to France, with flowers in place of a torch. If that were not enough, Koons also mentioned Picasso’s iconic “Friendship Bouquet.” (If only.) 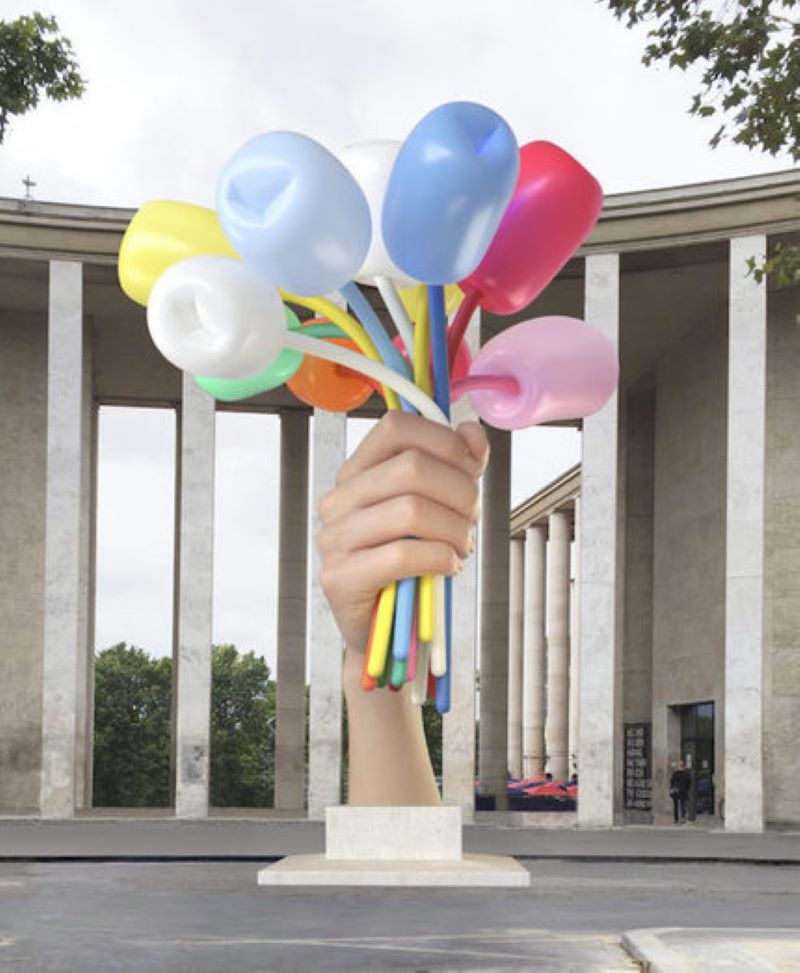 As with all Koons’ work, his contribution was merely a concept, and a recycled one at that. The “tulips” were not the beautiful shiny tulips that Koons had been doing from 1995 to 2004, and that could be found at the Broad Art Foundation in Los Angeles, below. 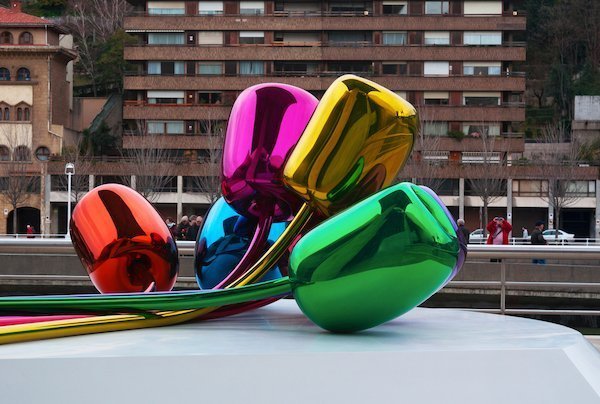 Those at least would have been glittery symbols of something. Instead the tulips given to Paris were primary-school colored doughy blobs.

Koons said that the tulips were “a symbol that life moves forward,” and that they “represent loss, rebirth and the vitality of the human spirit.”

We here at Flower Power often say the same thing about flowers, but we are talking about real flowers, or about paintings of flowers that give a restful, uplifting feeling.

Parisians, being Parisians, had already decided which version of “Bouquet of Tulips” they preferred: the black-and-white one that stood in the garden at the Petit Palais, the Museum of Fine Arts, with the parts wrapped in protective paper, before the sculpture was unveiled. It was covered up. It was monotone. It was subtle. 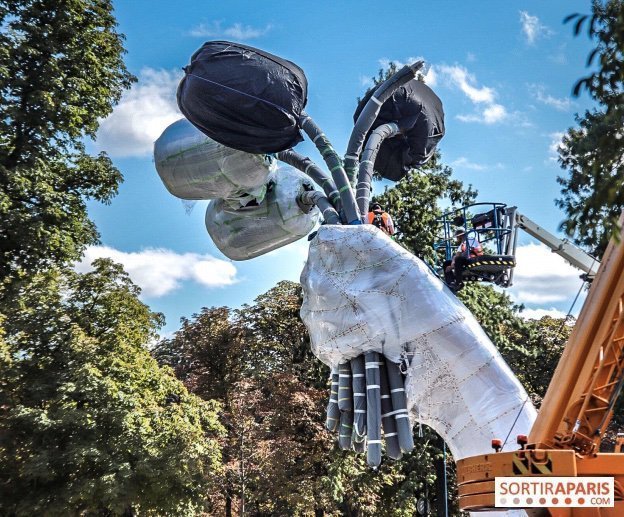 Masters of satire as the French are, someone decided to frame it. 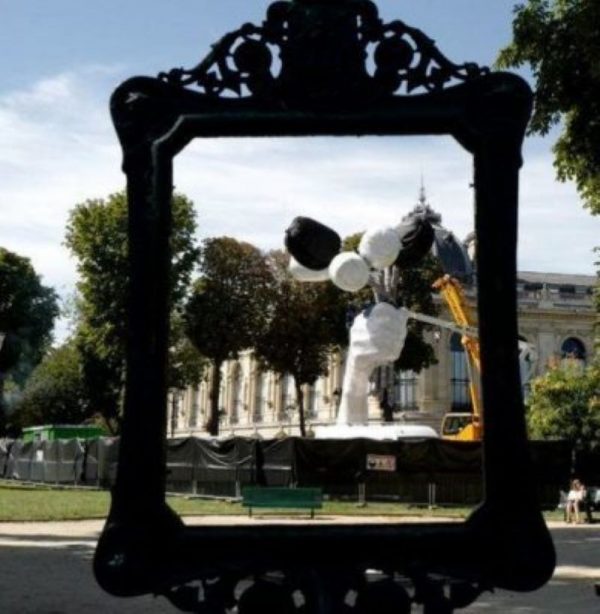 Still, October 4 came, and the actual statue was revealed. Several noted the derisive “slow clap” as the sheeting was dropped. The actual statue did not come as a surprise, since it looked exactly like the proposal up top. Nonetheless, criticism was immediate. 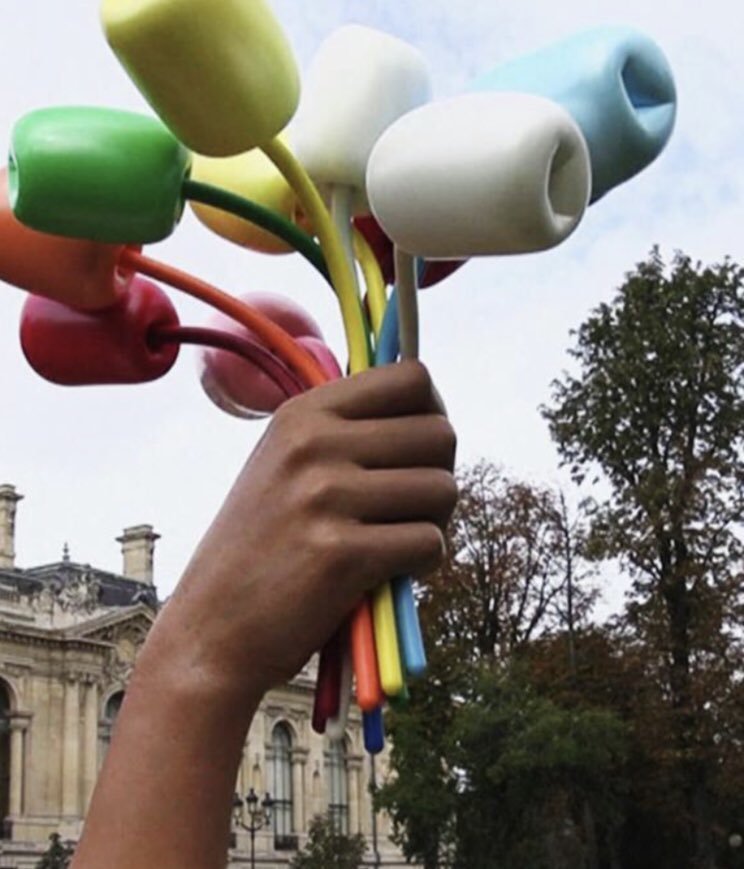 The hand was, how do we say, undeniably white. It did not represent the multicultural country that America has become.

Michaud went on to complain about the visual pollution of public space by all manner of signs, benches, playground equipment, public art installations and designer bike racks. He concluded his argument about the “irresponsible massacre of the urban landscape” by saying, “Your sublime objects, keep them, put them in your living rooms and your reserves, but give us a public space airy, alive, free, breathable.”

He clearly did not consider “Tulips” a sublime object.

Art critics tried to make a big deal about the number of flowers in the bouquet: eleven, instead of twelve. They rationalized that the missing flower represented the victims. Apparently art critics are unaware that in Paris a proper bouquet is 11 flowers, not 12.

Was that all? Of course not.

French artists and partisans loudly complained that there should have been an open competition for a memorial, with French artists considered. And, of course, it would have been nice if the $3 million plus it cost to fabricate the statue had been spent in France, instead of in Germany.

Money was raised from various contributors. Remember these names: Bloomberg, Ralph Schlosstein, Leonard A. Lauder, no doubt Jerry I. Speyer and Moet Hennesy – Louis Vuitton. The project ran over budget, and Jeff Koons threw in $1 million of his own money. 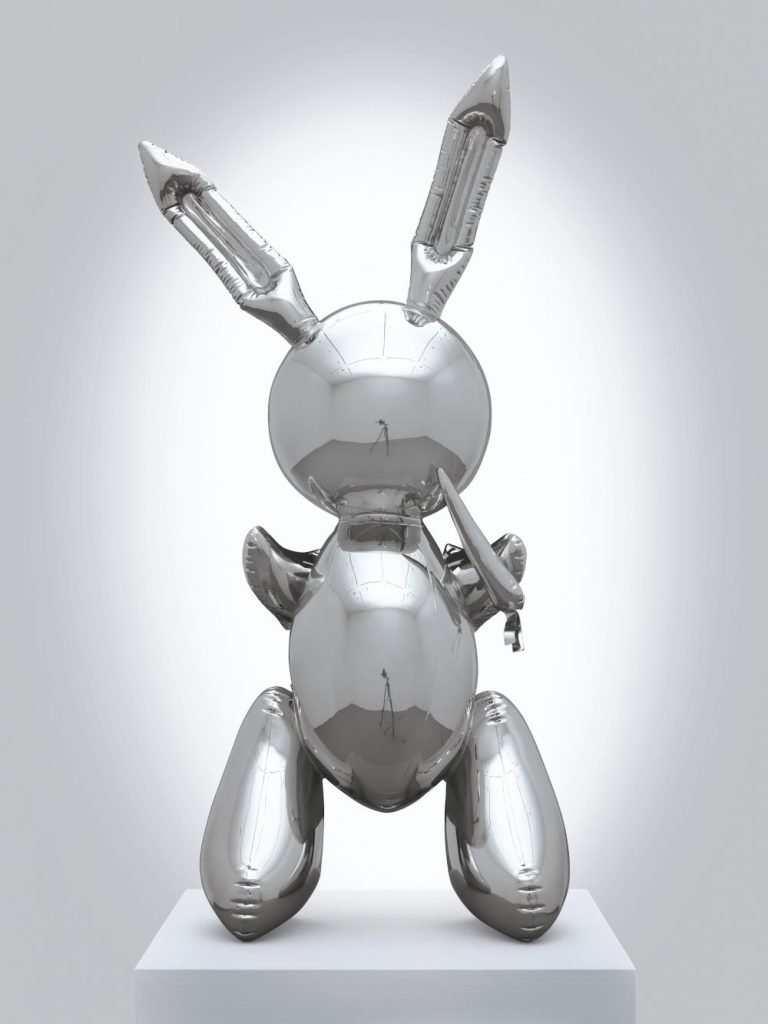 That did not impress people who knew that his 1986, three-foot-tall “Rabbit” sculpture (one of three, and the only one that remained in private hands) sold for more than $91 million at Christie’s in New York just last May. Which made it the most expensive work by a living artist to sell at auction. Ever.
Of course Koons does not receive a penny of that money, which went to the estate of S.I. Newhouse, who had owned the statue. But the sale established Koons as an artist whose work has enormous value.
It is estimated that his own worth is $200 million, so a gift of $1 million for “Bouquet of Tulips,” c’est pas terrible.
The main complaint about the statue, however, was the location.

Koons was offered a number of sites, and the one he chose, the Petit Palais, is in the heart of a chic shopping district, just off the Champs Elysées.

Let us consider that site, versus the main site of the attack, the Bataclan.

The Bataclan nightclub is in the 11th Arrondissement. The nearest hotel is Hôtel Mary’s République, $68 a night. Nearby restaurants include McDonalds and Hank Pizza, and stores include Empreintes, a French Craft Concept Store, and Marché Noir, a vintage clothing store.

The French say the location of the Koons sculpture is mere product placement, “opportunistic” and “cynical.” It meant putting his “Bouquet of Tulips” close to the Louis Vuitton store on Avenue Montaigne. It was there in 2017 that Koons did the store windows to celebrate his partnership with Louis Vuitton, which has resulted in, among other things, a line of handbags imprinted with Old Masters artworks. 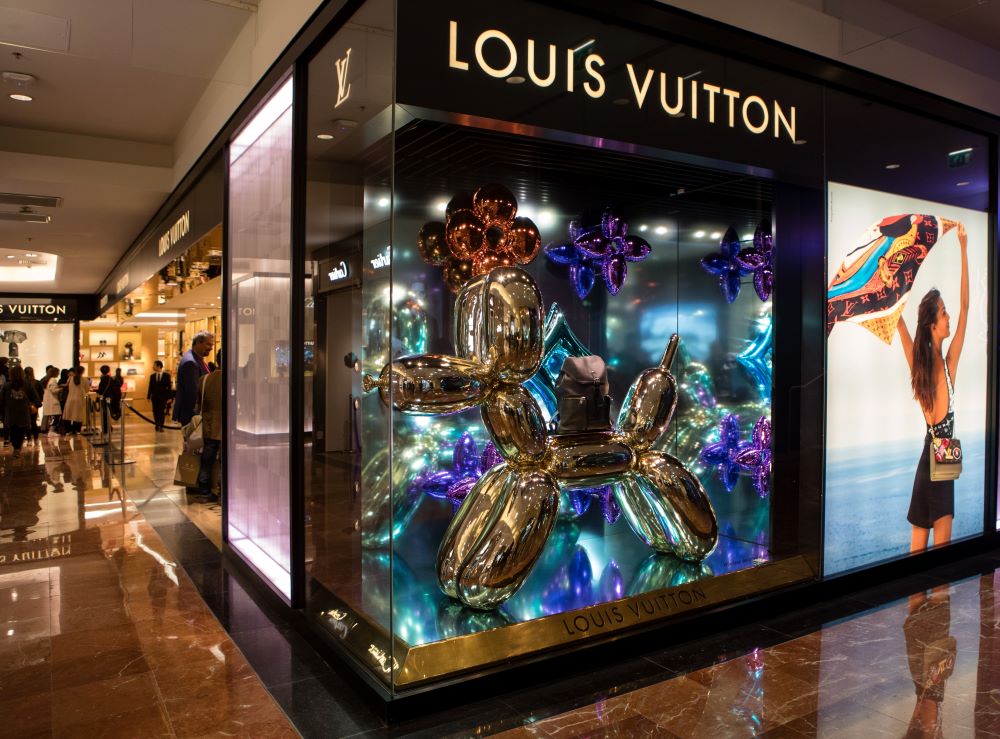 How did this happen? Haters can blame Jerry Speyer.

Jerry Speyer. There is no doubting Speyer’s bona fides as an art collector and appreciator of modern art. Speyer, of the giant Tishman Speyer real estate company, still, at age 79, sits on the board of Carnegie Hall. When Tishman Speyer finished the “Q” in 1996, an iconic building in Berlin, Speyer installed Richard Chamberlain’s 36-foot tall tower of scrapped cars in the atrium, making it an art-lover’s destination in an art-lover’s city. Score One for his public art installations.

In January, 2016, just two months after the terrorist attacks, Speyer had dinner with Jane D. Hartley, then Ambassador to France under President Barack Obama. Speyer and Hartley, and their spouses, were part of the New York art world elite. Speyer’s second wife, Katherine Farley, had her masters degree in architecture from Harvard, and was on the board of Alvin Ailey, the New York Philharmonic and Lincoln Center. Hartley had worked in Washington under Jimmy Carter, been an executive in television broadcasting, been the CEO of the G7 Group, then CEO of an international consulting group before being appointed to her ambassadorship. She was married to Ralph Schlosstein, a founder of Blackrock in New York, now the world’s largest asset managing company, and the company closely tied to Democratic fund raising and recruitment.

At that dinner Hartley expressed her idea that the United States should do something to show support for Paris. Jerry Speyer suggested an artwork by Jeff Koons, one of his favorite artists. (Another being Frank Stella.) Speyer had, success No. 2, put Koons’ “Puppy” in Rockefeller Center in the summer of 2000 in conjunction with the Public Art Fund. “Puppy” being a 40-foot-tall topiary of a West Highland terrier, planted with marigolds, begonias, impatiens, petunias and lobelias, and totally awwww-inspiring. With the “Puppy” success behind him, Speyer followed with Koons “Split Rocker” in 2014 and an inflatable “Ballerina” in 2017. (One of Koons’ 7-foot-tall stainless steel “Seated Ballerina” statues resides in the courtyard of a condo in Bal Harbour.) “Puppy” and the following Koons works attracted avid Instagram fans.

Speyer must have imagined that something cheerful like “Puppy” would be just the tonic that Paris would need. 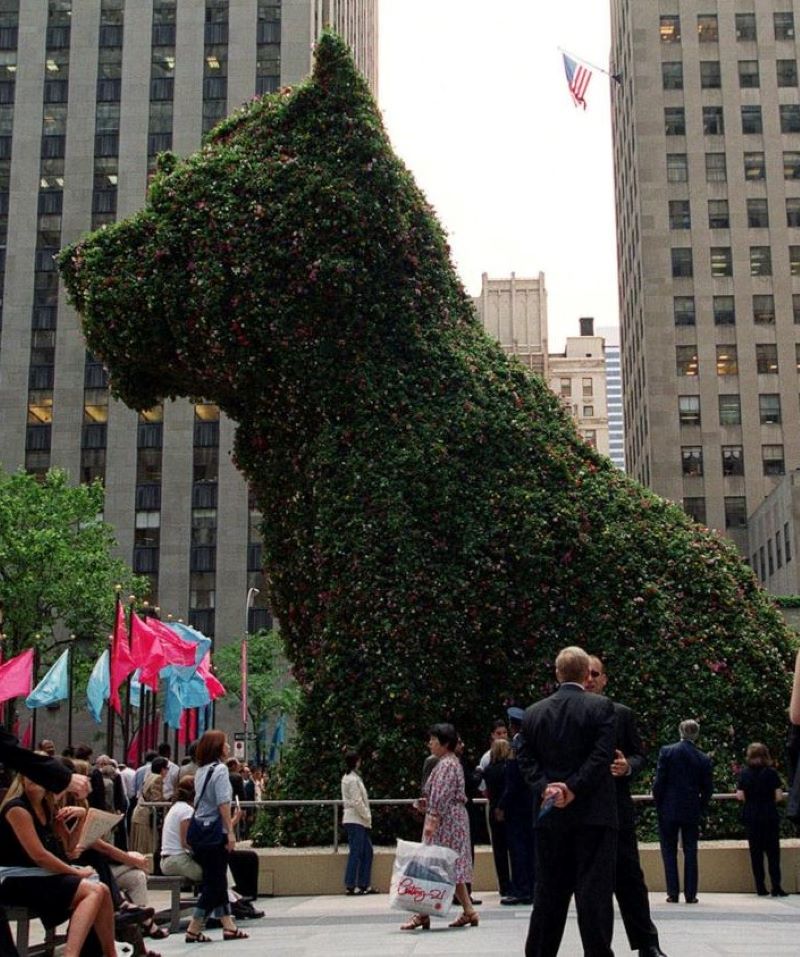 Speyer was, at the time, chairman of the board of the Museum of Modern Art. His opinion carried weight. And Hartley agreed immediately. Koons, she knew, was one of America’s most important artists.

A few months later she called Koons, and he immediately agreed to do “Bouquet of Tulips.” Without charge.

The problem is that the French have never much cottoned to Koons, considering his artwork, according to “Le Monde,” “a paragon of kitsch.” When the Pompidou Center had an exhibit of his work in 2012, “Le Figaro” left no doubt about the tenor of its review, giving it the headline “impostor or a creator?”

Alors, there was also the announcement that Koons would donate 80 percent of proceeds from the sculpture to victims of the terrorist attack, with the other 20 percent going to upkeep of the sculpture.

Proceeds? How does a public artwork have proceeds? It was explained that they will come from selling the copyright of the artwork for commercial products depicting the sculpture. 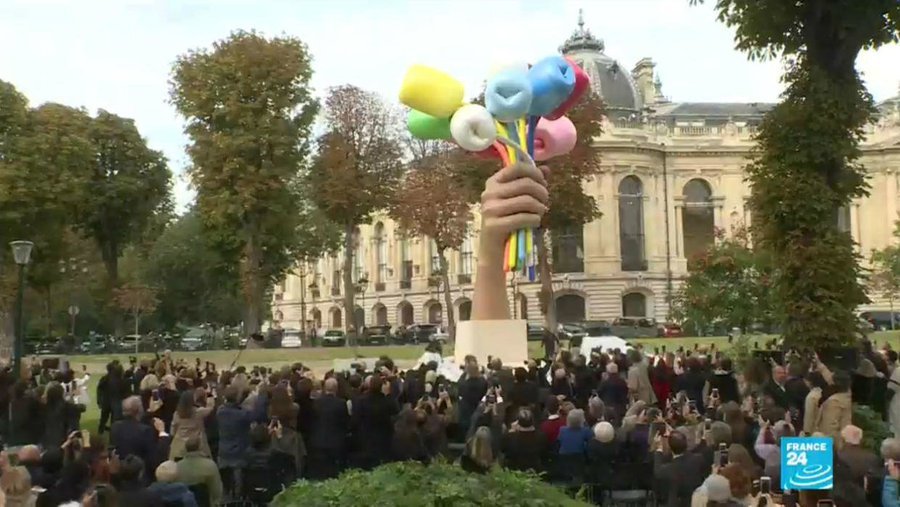 The French shudder at the prospect of licensed umbrellas sprouting images of “Bouquets of Tulips,” posters, postcards, sippy cups, lamps, in fact any multiplication of the dreaded image. And they suspect there will be a line of “tulip” do-dads. It would not be surprising to eventually find Tulip pencil sharpeners on sale.

Then again, perhaps the French will come to love it. Maybe entrepreneurs will begin selling French macarons nearby, boxed in colors of the tulips. Maybe it will become a gathering spot for flying kites, or holding rallies. Maybe a billion Instagrams will bloom, although people standing at the bottom will just have a bland tan block behind them, sure to sprout graffiti.

That’s the thing about public artworks. They take on a life of their own, something never imagined by their maker.

Jeff Koons: You no longer have control over “Bouquet of Tulips.” It now belongs to Paris and those Parisians. – Linda Lee

Linda Lee is a former editor at The New York Times. She was the deputy editor of the House & Home section and wrote frequently for Sunday Styles. She is the author of six books.