Cruz, who had become spokesman for Chanel last year, and was part of Lagerfeld’s inner circle, was stepping on a fashion runway for the first time. Lagerfeld died last month at the age of 85.

Over the decades, the Kaiser, as he was known, collaborated on a variety of fashion and art related projects.

His signature style of snow-white hair tied in a ponytail, black sunglasses, fingerless gloves and high, starched collars made him a recognizable celebrity in his own right.

We are presenting a video of one of his iconic seasons, 2015, when flowers were in bloom. 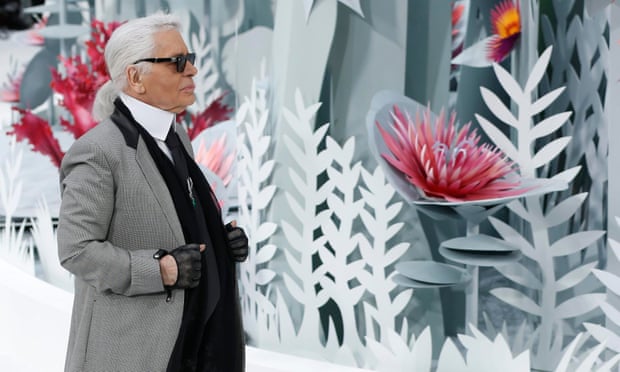 Among the most iconic flowers for Chanel was the camellia.

It’s a motif that is branded on packaging, bags, clothing, jewelry, and shoes. The house even sold individual camellias for $575 and I always wondered who spent that much on one and what did they do with it.

Coco Chanel even incorporated the camellia design into chandeliers and other decor in her French apartment.

There was a reason Coco Chanel loved this flower. As written about in many biographies, Coco Chanel fell in love with the camellia after reading Alexandre Dumas fils’ “La Dame aux Camelias,” a story in which the heroine always wore a white camellia, showing that her heart remained pure and focused.

There was another appeal to this flower, which is from Eastern cultures. The camellia flower didn’t interfere with the scent of her famous Ch. 5 perfume.

The symbolism of this flower also appealed to Chanel’s superstitions. In Eastern culture, the camellia is the flower representing longevity and purity and was thought by the Buddhists to drive away bad spirits.

Lagerfeld continued the tradition of maintaining the camellia as Chanel’s flower of choice and used it in the house’s designs for decades.

As far as where Lagerfeld bought his own flowers, he would go to Lachaume Fleurs in Paris on Rue du Faubourg St Honore. He would say that he could “recognize a Lachuame bouquet among hundreds” and complimented the store for his creative generosity.

The German-born designer was 85.

Here is a presentation of his Fall Winter Haute Couture 2018 show, staged in a reproduction of the gardens at Versailles, at the Grand Pallais.

To see how Victoria Dubin incorporated Chanel into her daughter’s Bat Mitzvah see our story here.