How Floral Fabrics Can Wake Up The Design Of Any Room 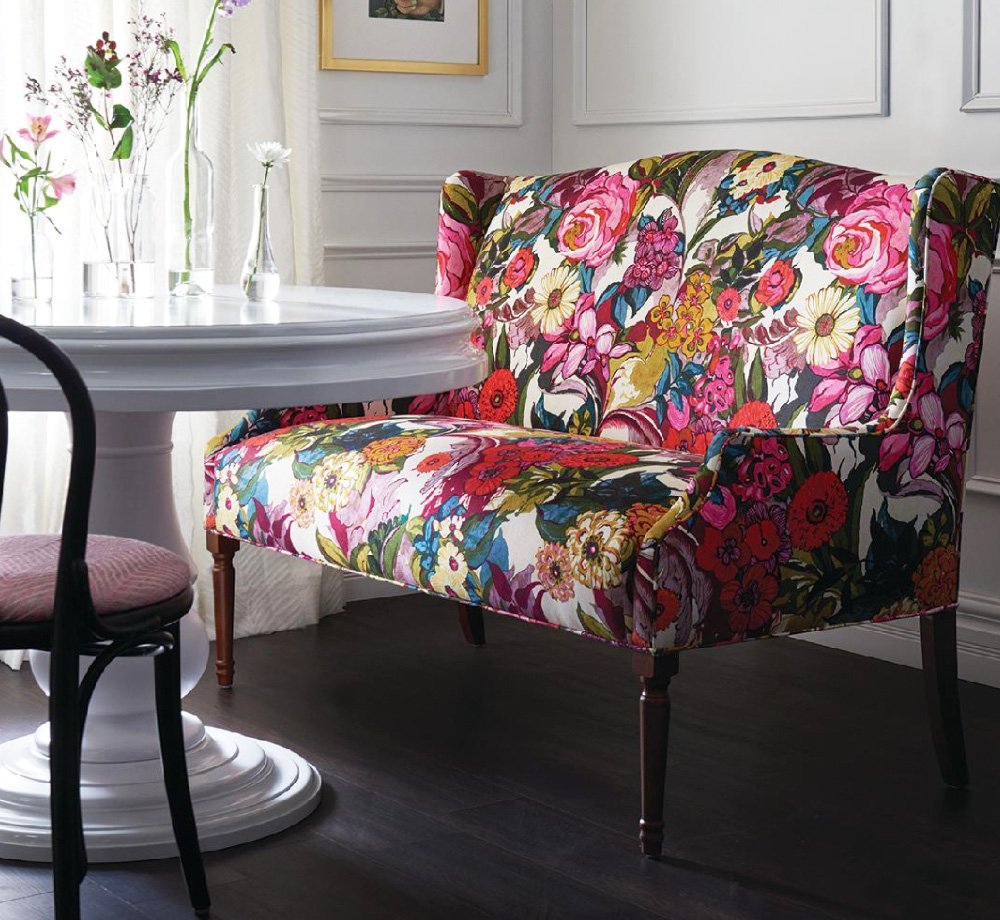 It may be the first decision made, or the last. It certainly will be the most important other than the color of the walls. What is the largest piece of furniture in the room? If it’s the sofa, and the style is already determined, then the only thing left to decide is the upholstery.

Designers can argue endlessly over their favorite shade of white. There are so many to choose from!

Will a couple, any couple, agree on an upholstery pattern? If so, their relationship is rock solid. OTOH, it’s almost impossible to look at a fabric on a page and imagine it on a large piece of furniture. That’s where Rachel Kern came in. She noted that it was especially hard for people to see something online and understand the scale.

Rachel is a designer at Fabricut, allied with the textile manufacturers Vervain and S. Harris in Tulsa, Oklahoma. Fabricut loved Vervain’s outsize and colorful textiles and were disappointed to see them used only as drapery. One pattern in particular, Vervain’s Secret Garden Passion Fruit, seemed a candidate for what Rachel called a “flatter application.”

What she meant was that people saw the pattern and immediately thought “drapery.”

“It makes very pretty drapes,” she said, a little defensively. She knew the piece of furniture would be dictated by the large-scale of the boisterous piece of fabric, which had a 33-inch vertical repeat and a 27-inch horizontal repeat.

“It has a lot of intense colors, big repeats. Like the original artworks.”

Somewhere in Oklahoma they found a settee, the equivalent of a double-wide, wing-back chair. It was duly upholstered and taken to their studio, where it was shot in a traditional setting.

“It’s interesting to see how people respond,” she said. The ad was run  in trade magazines, and in a brochure in showrooms.

And where is the settee?

No one knows. For them it was just a prop. 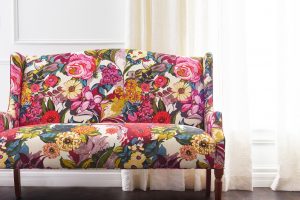 The settee was shown in what could have been an English country house. But I like to think it could just as well sit in Manhattan, in a completely modern loft, where everything else is gray, white and black. There, say next to the grand piano, an Eames lounge chair and maybe a white orchid, sits this sofa.

Don’t you love it? Don’t you want to drive to Tulsa and find it? Or upholster one for yourself?