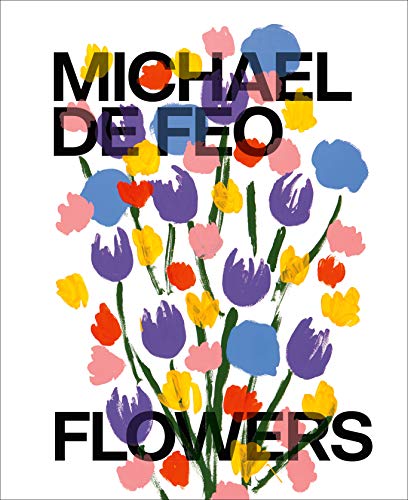 Michael De Feo’s new book, “Flowers,” summarizes a long career of painting fanciful flowers, many of them graffiti images of a single distinctive flower. It is almost a child’s drawing, what people would call a daisy, but we at Flower Power know is not a daisy. Daisies of course are compositae, and – well it’s too complicated to go into here.

Let’s just say it’s easier to think of De Feo’s flower as a mallow, or a hollyhock, or a hibiscus., even a pansy. Anything with five petals. De Feo’s simple drawings have five petals (although some of them have seven) and a stem that ends in an arrow. As if the arrow is not enough, it lands on a definitive underline. The drawings are done with thick lines, and outlined in white. These graffiti flowers started in New York City in 1993 when De Feo was an art student at the School of Visual Arts. Since then De Feo’s flowers, as recognizable as Keith Haring’s radiant child and barking dog, or Banksy’s black-and-white stencils, have appeared around the world, in Mexico, Belize, Panama, France, Turks and Caicos, Italy, England, China, Canada and all over the United States. Some accounts say 40 international cities.

Some of the single flowers are on silk-screened panels, thus easy to paste onto a lamp post. Others are painted at great scale, in the middle of the night. Seeing one, in blue, yellow, orange, or pink, is like seeing an old friend. Finding one in a foreign country offers a kind of “Where’s Waldo” shock of recognition. For a New Yorker, it’s like finding an old friend. For the graffiti insider, it’s the 21st century version of a cleaned up, sanitized Taki 183. 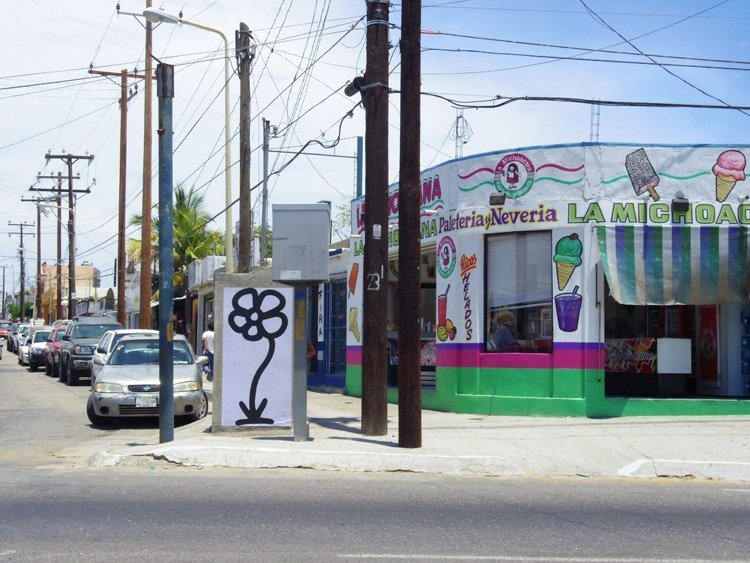 Richard De Feo’s career has included far more than graffiti flowers. He has worked in advertising and won a CLIO award in fashion and beauty; he has won awards for magazine design. He shot the photographs for a children’s book, “Alphabet City: Out on the Streets,” which used graffiti to teach the letters of the alphabet. 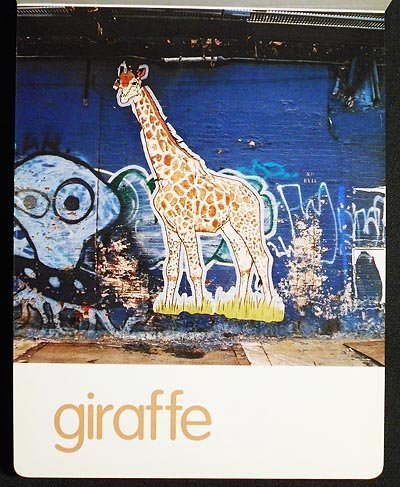 His new book, “Flowers,” published this month by Abrams, contains 200 photographs of De Feo’s work, which includes a guerrilla campaign he did to beautify bus shelters in 2015 by pasting transparent sheets of his paintings over advertisements. He often paints abstract flowers over pieces of advertising, or models in languorous poses.

De Feo, who lives with his family in Manhattan, is represented by the Danziger Gallery. Many years ago New York magazine listed Michael De Feo “a.k.a. the Flower Guy” as reason 124 to love New York, because the “street art veteran” has “spent more than a decade pasting whimsically uplifting silk-screened prints around the city.”

His new book offers anyone who has missed any of that now quarter-of-a-century career a chance to catch up.