Potted herbs at Maman by Floratorium.

The city is feeling more alive, literally. Last month, restaurants were permitted, through emergency programs issued by the city, to reopen and expand their outdoor seating in the streets. The aim was to help them regain some semblance of their regular businesses, which had been closed for dining on site since March.

While the jam-packed bistro tables were to be expected, it’s a delight to see how creative the restaurants have become in the floral arrangements that are blooming around the borders. No matter the scale of these temporary floral havens, New York restaurants have created a veritable garden in the streets. And they all reflect the spirit of their establishments.

At Orsay, under pointed white tents, terra cotta-colored planters are filled with a profusion of rosemary and wildflowers in blue, purple, and white. At J.G. Melon, they’re a punchy red-and-green mix. And at Marea, vines climb over a scaffolding evoking an oceanic tide.

Here we take a look at how three restaurants teamed up with floral designers to turn a tricky situation into a blossoming success. 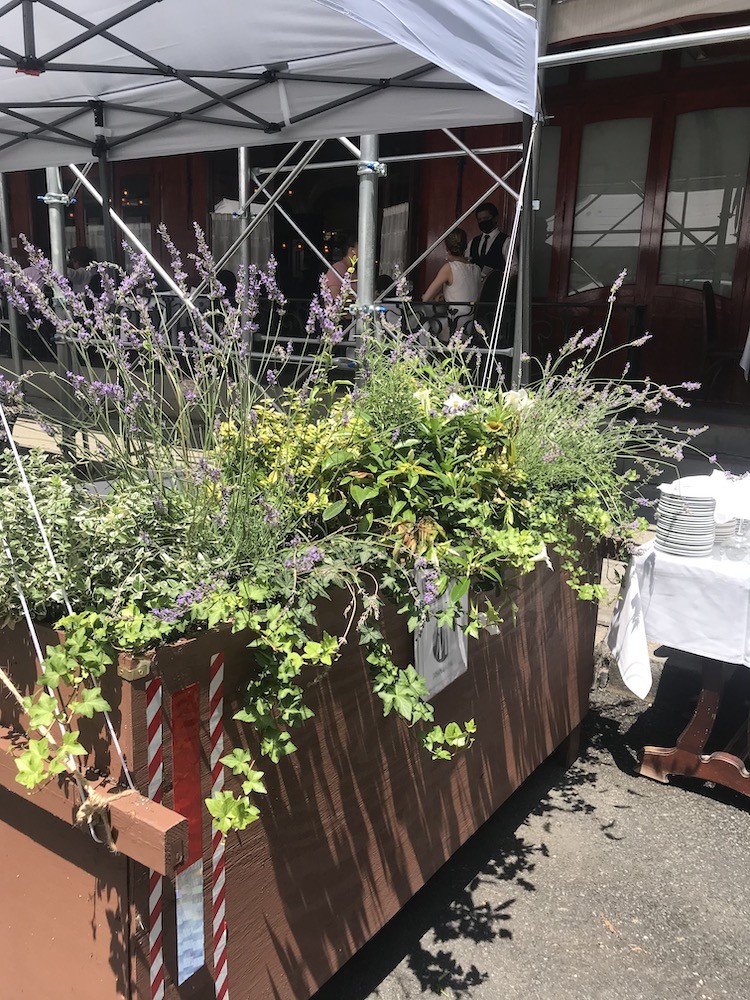 Wildflowers with a ‘French influence’ at Orsay.

Maryann Finegan of floral retailer Foliage Garden ordinarily does the outdoor plantings at Orsay, a Parisian-style brasserie on 75th Street and Lexington Avenue. She upped the ante for the restaurant’s new outdoor seating area, which now extends onto the street and the avenue.

“I like it a little messy and lived in and garden like,” said Finegan who aimed for a “French influence” feel in keeping with the culture and menu of the restaurant. “I did French lavender, dipladenia vines, some rosemary, emerald gaiety, and golden glow (or cutleaf coneflower) and ivy.” She added, “White/blue to me is very French.”

Finegan says the upkeep is pretty regular but her choices were informed by ease of care. “Dipladenia will flower all summer. They are stunning. But they do not like a Mai Tai poured on them.” Boxwood, on the other hand, are easy. “They’re the #1 most requested plant in New York. It’s evergreen. It lasts. It tolerates the heat, the light, no light. It tolerates everything.”

Grasses and plumbago at Hao Noodle on 14th Street.

Her floral arrangements for restaurants run the gamut from Orsay-type splendor to a single shrub. “A lot of restaurants just put trees out front,” she says. “A lot of people are putting one plant in an entire box.”

For Hao Noodle on 14th Street, Finegan chose grasses and plumbagos. Serafina, for example, which has several locations around the city including one on 79th and Madison, wanted “all boxwood.”

Has there been an uptick in business due to the street seating? You bet. “Restaurants up and down our street are non-stop ordering plants,” said Finegan noting it’s good for what has been a very slow business for florists because they were forced to close for 10 weeks.

“The service and event industry came to a screeching halt,” she said. “No weddings, no fashion shows, no corporate events. Not even funerals. “To have this happen is very helpful.” 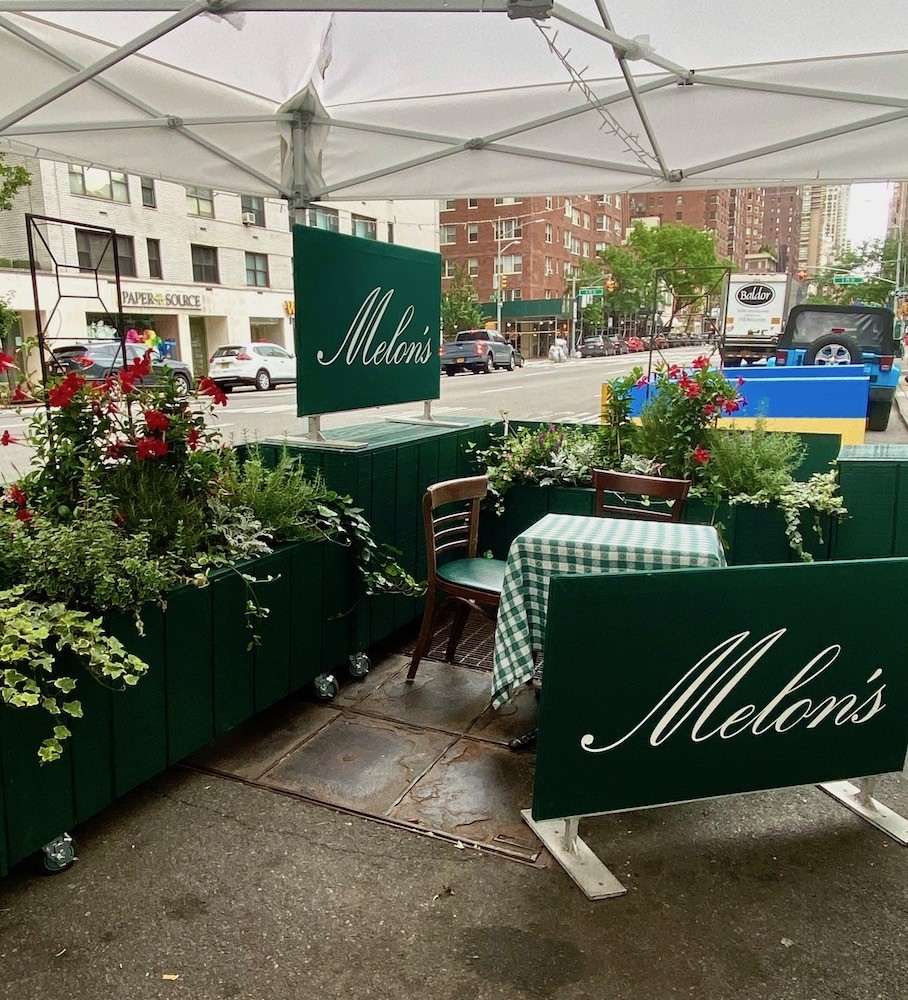 Red mandevilla match the ceiling of the restaurant at J.G. Melon

Beloved old-school burger joint J.G. Melon on 74th Street and Third Avenue tapped its own staff to help with the flowers in a move that feels right for the family-friendly spot. John Roney, an actor and server at the restaurant who worked for a landscaping company in college had already been “putzing around with the tree wells” outside the restaurant before the pandemic struck, putting his skills to broader use styling the outdoor green space.

“A lot of rosemary in the boxes, variegated hollies, different types of ivies,” he said about the floral selections which are housed in bright green wooden boxes that match the color of the building and the restaurant’s quaint signature green-and-white checked table cloths. “As well as mandevilla. The owner, Jaine [O’Neill], likes red,” said Roney, “which mirrors the red ceiling inside the restaurant.”

He had recently made a trip to the Metropolitan Plant and Flower Exchange in Fort Lee and picked up some iron trellises, which he placed behind the boxes for support.

Some of the choices were more practical, like the night blooming jasmine. “Practical because it abuts a trash bin,” said Roney. “Because we have a table right there, you want something that smells nice.”

Wisteria vines and hydrangeas create an oceanic vibe at Marea.

At Marea, the Michelin-starred Italian seafood restaurant on Central Park South, aiming for an oceanic feel, the floral designers from Floratorium created a lush environment enclosing diners in a cocoon of wisteria vines “to create movement and “Life.”” Completing the feel, jasmine vines, and camelia and salal leaves added greenery and foliage while thousands of hydrangeas in various shades of blue pop out from the branches to evoke an oceanic setting.

Floratorium’s founder and creative director Carlos Franqui, who has a background in advertising, calls his concept ‘Life under the Marea.’ He was inspired by the concept of tides (“marea” means tide in Spanish) and the amount of sea life it reveals when the tides go down. He associated this idea with the current COVID-19 pandemic and the forced closure of restaurants. Finally, after so much uncertainty, they’re able to reopen with outdoor dining.

In building the concept, the team—there were seven people working on it over five days—had a specific challenge to overcome. “We were to design an outdoor space on a busy NYC sidewalk (Central Park South) that also was under a scaffolding,” wrote Franqui on Instagram. “The goal was to visually make the scaffolding disappear while using it as our foundation and structure. Hundreds of Curly Willow branches were used to organically cover the structure while providing an anchoring system for the foliage that later followed.”

This included custom planters (created at their in-house mill workshop) in cerulean to visually make the scaffolding legs disappear.

As with the flowers at Orsay and Melon’s, capturing the spirit of the restaurant through flowers was the aim at Marea as well, where Franqui wrote poetically about their installation, “’Life under the Marea’ conceptualized with the idea that after all the turmoil we have endured during these unprecedented times, the Marea (tide) starts to settle revealing she’s full of vibrant life.”

Like the Marea tide, the streets of New York are once again full of vibrant, and green, life.