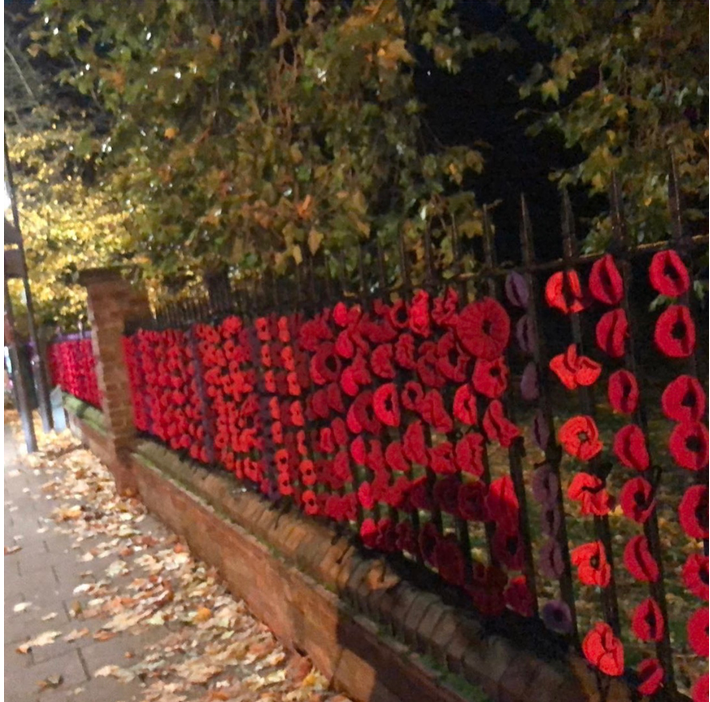 A group of women from a neighborhood in London crocheted these poppies to remember veterans as part of Remembrance Day.

This reminds me of how my great aunt Mary taught me how to crochet and knit as a child. Shows you how grandparents and parents can teach young children a love of gardening as well as knitting from so long ago.

It also is a wonderful example of unity and people gathering together for a common cause that promotes kinship and respect for traditions.

Poppies are the flowers used as a symbol around the world to remember those who died in military service.  They are often presented on graves in the form of wreaths since its circular shape represents eternity, continuity and the circle of life. However, the poppies are also worn on veterans’ lapels and often placed individually at a gravesite to represent honoring and respecting those who sacrificed their lives in military conflict.

Some have thought the flowers were popularized because of their blood-red color signifying bloodshed as a result of someone’s sacrifice to their country.

This is a logical assumption.

Another interpretation from classical mythology is that the scarlet flower with its ebony interior – black is also a color of death – signifies the promise of resurrection after death. Since these ancient times,  poppies have long been used as a symbol of sleep, peace, and death.  In both Greek and Roman myths, poppies were used as offerings to the dead. Poppies were also used as emblems on tombstones to symbolize eternal sleep.

However, many history buffs credit Canadian surgeon and soldier John McCrae for popularizing its use for military remembrance ceremonies. He wrote the poem, “In Flanders Fields” during World War I at a place where poppies were plentiful and grew around gravesites.

“In Flanders fields, the poppies blow
Between the crosses, row on row,
That mark our place, and in the sky”

McCrae was inspired to write this poem on May 3, 1915, after presiding over the funeral of a friend and fellow soldier Lieutenant Alexis Helmer. Legend has it that he didn’t even like his poem and discarded it. But his fellow soldiers, moved by the sentiments, retrieved the poem which inspired many.

Poppies were a cultural reference point to many at that time. Going back to the destruction of the Napoleonic wars of the early 19th century, red poppies magically grew around the bodies of the fallen soldiers on what seemed like a barren land.  Poppies became an image of hope for peace with the unspoken message that sacrifice was noble for the greater good.  In late 1914, the fields of Northern France and Flanders were once again ripped open by guns blazing and fighting. Once the conflict was over, one of the only plants to grow were the poppies.

Like the perennial flower, McCrae’s poem, “In Flanders Fields,” also spread and pollinated in magazines and the public consciousness across continents.

Becasue of its immediate popularity, parts of the poem were used in efforts and appeals to recruit soldiers and raise money selling war bonds. Turns out that the poem and poppy are prominent Remembrance Day symbols throughout the Commonwealth of Nations, particularly in Canada, where “In Flanders Fields” is one of the nation’s best-known literary works. It is also very popular in the United States and cited on both Veterans Day in November and Memorial Day in May.

As a result, the poppy remains a tradition forever more to remember and honor veterans around the world. 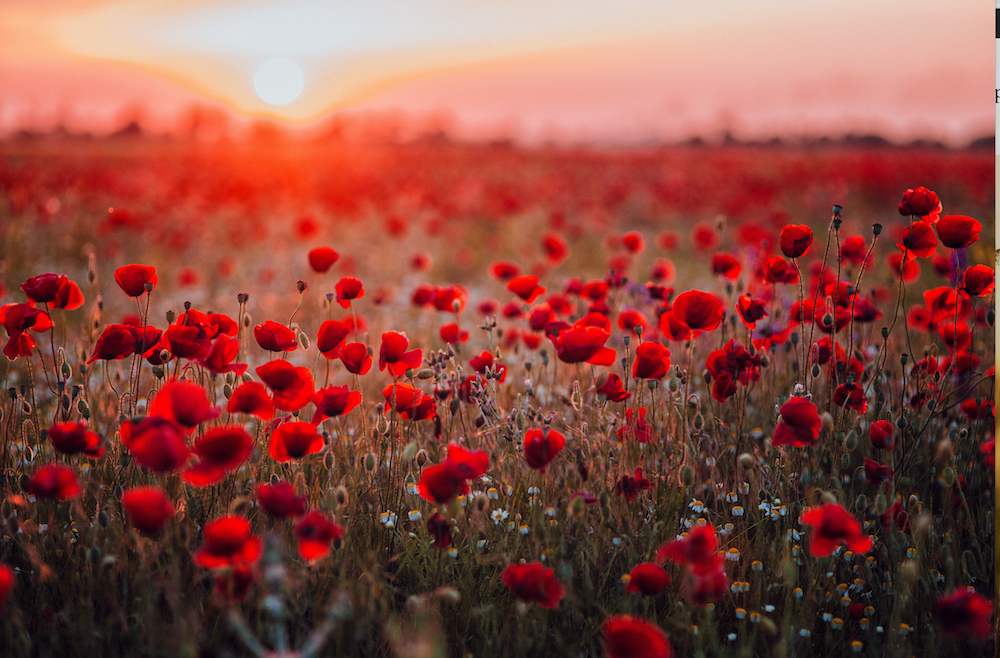