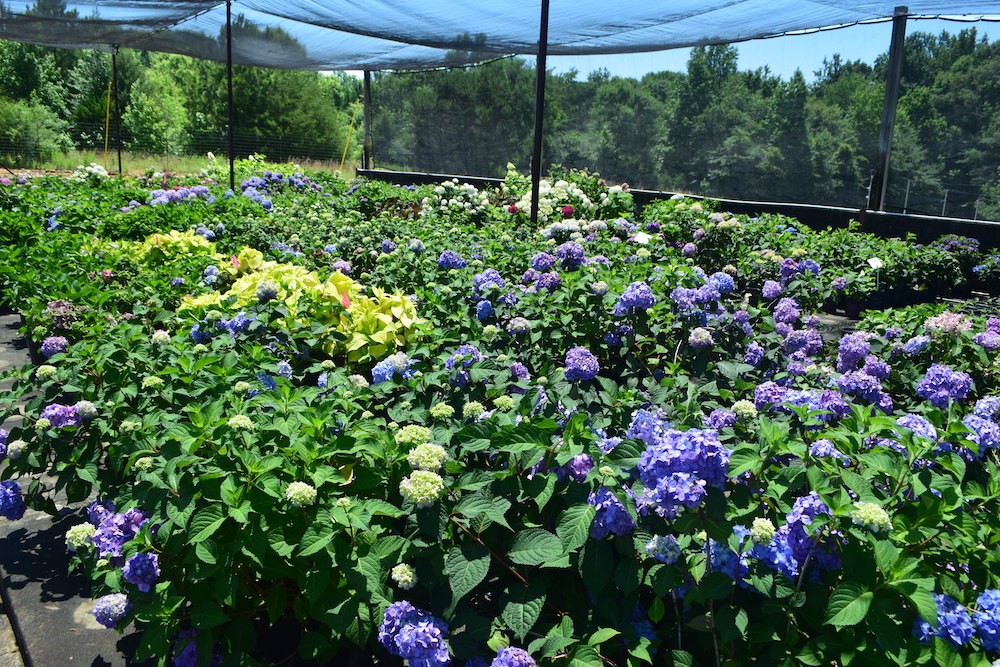 Leading up to July 4th weekend, it may be a nice time to salute those in the floral industry who have made not only positive impacts but have achieved success and acclaim by embracing values that Americans hold dear. Curiosity. Smarts. Integrity. Inventiveness. Generosity. Independent thinking.

Those were the traits Flowerpowerdaily looked for in choosing the following list of great Americans in the floral world.

Here are the stories of Debra Prinzing, Will Radler, Erin Benzakein, Carolyn Roehm, Dr. Michael Dirr, and why they were chosen. 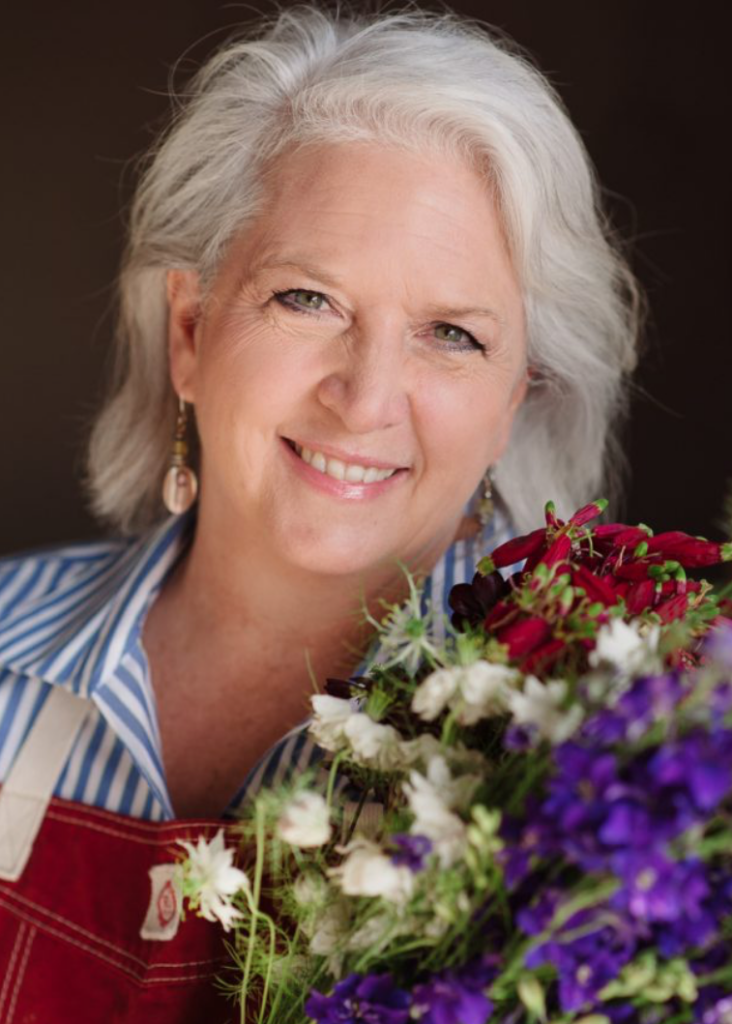 Long before we all recognized the need to pause and smell the roses, Debra Prinzing was promoting this philosophy as part of her Slow Flowers movement. Life, she intuitively knew, is a process and flowers teach those cycles of wisdom as well as provide eternal beauty.

Prinzing truly is a visionary as well as one of the pioneers in 2015 of American Flowers Week, the advocacy, education and outreach campaign to raise awareness of American growing ingenuity and design mojo which attracts over 400,000 social media hits. Running through July 4th, it offers programs about American growers and designers on her popular Slow Flowers Podcast with Debra Prinzing and Slowflowers.com.

What we appreciate about the Seattle-based Prinzing is that she didn’t need to travel to Holland, Columbia or England to mine talent. She recognized that innovators are in our backyards growing all the time. By putting her spotlight on these talented flower growers and designers, she became not only an educator but an inspirer. In fact, she is known as the leading advocate for American-grown flowers. making her indeed worthy of winning the American Horticultural Society’s Frances Jones Poetker Award after the famed 20th-century botanist.

Furthermore her generosity of spirit and knowledge of all things flora make her a popular speaker and author – she’s written 10 books including “Stylish Sheds” and “Elegant Hideaways,” “The Abundant Garden” – and he online directory is the gold standard for American flower farm florists, shops and studios who source domestic and local blooms. 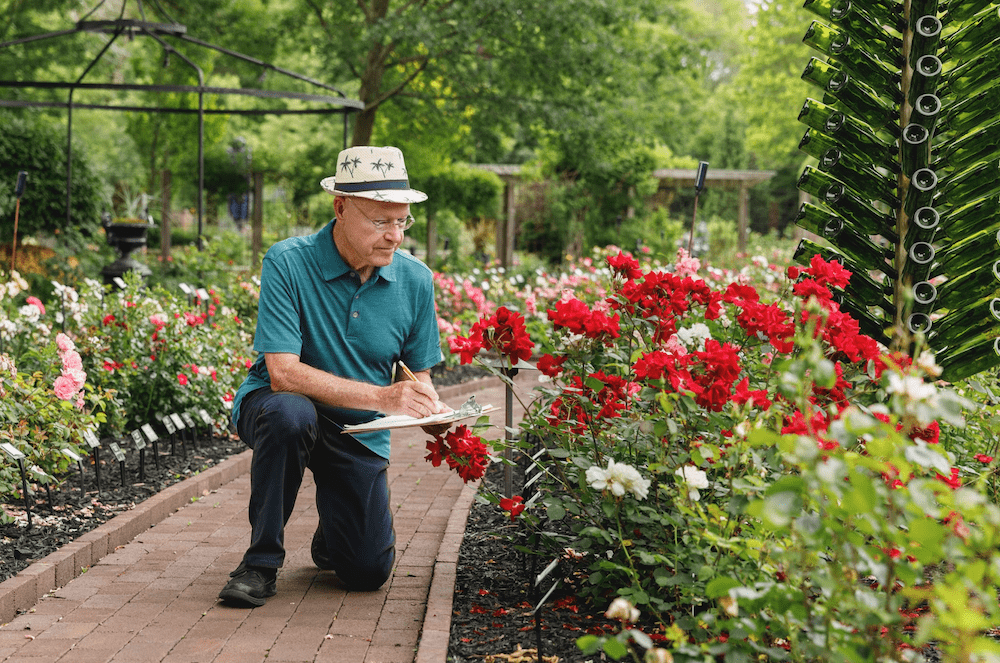 Will Radler is the Steve Jobs of flower growing.

From a basement in his home in Greendale, Wisconsin, he came up with the idea of mixing the longevity of shrubs with roses and created the Knock Out Rose in 2000.  It was a 25 year project inspired by his mother lamenting how black spot was ruining her beloved flowers.

Knock-out roses are disease-resistant, generously blooms more than once and even has self-pruning habits. It is the most widely sold rose in the United States, with more than 90 million varieties sold at garden centers, nurseries and online retailers.

Radler is both a teacher and an inventor- as well as the author of “Rose Gardening.”

What are the others on his hit list? “A climbing rose called Highwire Flyer, a perennial called ‘My Favorite Verbena,’ and a fragrant rose called ‘Orchid Romance,” he says.

Of course, like any mad scientist with aesthetic visions, he is always working on his farm experimenting with new floral creations.

Why he is not a household name, similar to David Austin, is a mystery to us at Flowerpowerdaily.

But perhaps it’s because he didn’t attach his name to every rose bush sold. In a very democratic American way, Radler wanted his rose to be for the masses. One of his greatest achievements is making rose-growing easier and more accessible.

Considering that the rose is our national flower, he is so worthy of being called a great American in the floral world.

Just this week Will Radler was the winner of the 2020 Award of Excellence by National Garden Clubs, Inc, the largest volunteer gardening organization in the world for his significant contribution to our communities. 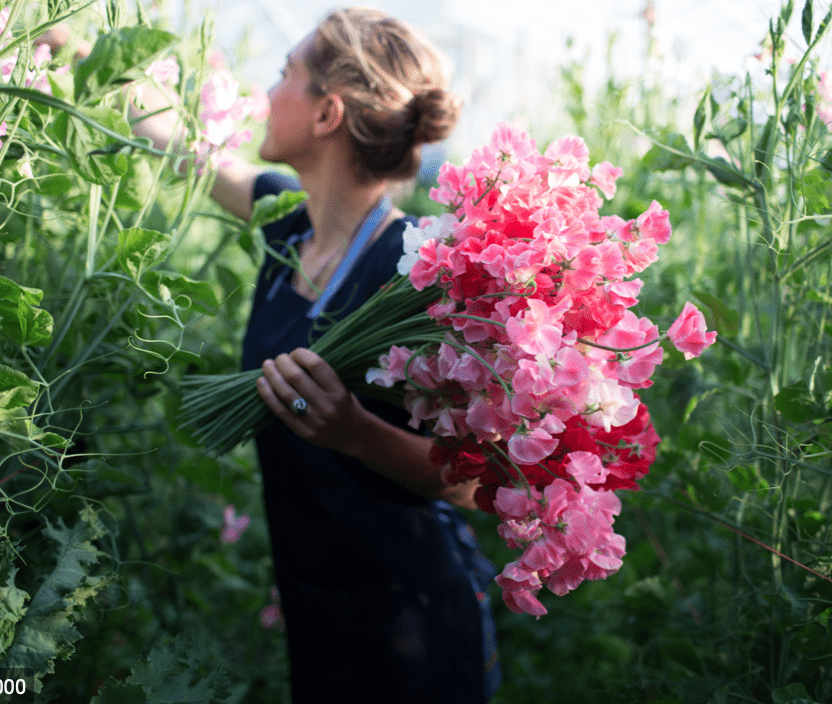 We all love success stories – especially when it’s not calculated and planned but joyfully serendipitous. Such is the story of Erin Benzakein, the flower farmer behind Floret Flowers in Washington’s Skagit Valley who we call the Pied Piper of Petals. Leaving Seattle for the rural dream, she and her husband Chris bought a farm and after some misfires started growing cut flowers. Not only did her arrangements find a business at Trader Joe’s – an order for 500 for Mother’s Day was a pivotal aha moment – but her floral workshops became a  coveted event attracting people from around the globe.

Floret Farms is not about opulence but optimizing your connection to Mother Earth and helping people create “the garden of their dreams.”

That is achieved through a wide variety of classes on planting techniques, knowing the difference between sweet peas and her beloved dahlias, understanding soil and knowing what flowers to plant in your region.

Floret Farms has also created floretflowers.com/directory which offers places to source flower farms and local florists in your area. “Kindred spirits united in a lot of local seasonal flowers,” she explains.

Not only has she written popular books – “Floret Farm’s A Year in Flowers” is the new one – but the website also sells quality seeds and bulbs for her many fans. At a time when it’s so hard to trust, people feel safe with Floret Farms.

Erin’s taste is also impeccable and we delight in observing so many smart choices. This is now a big business operation but one that hasn’t lost its soul.  In fact, it continues to blossom with maturity and beauty. 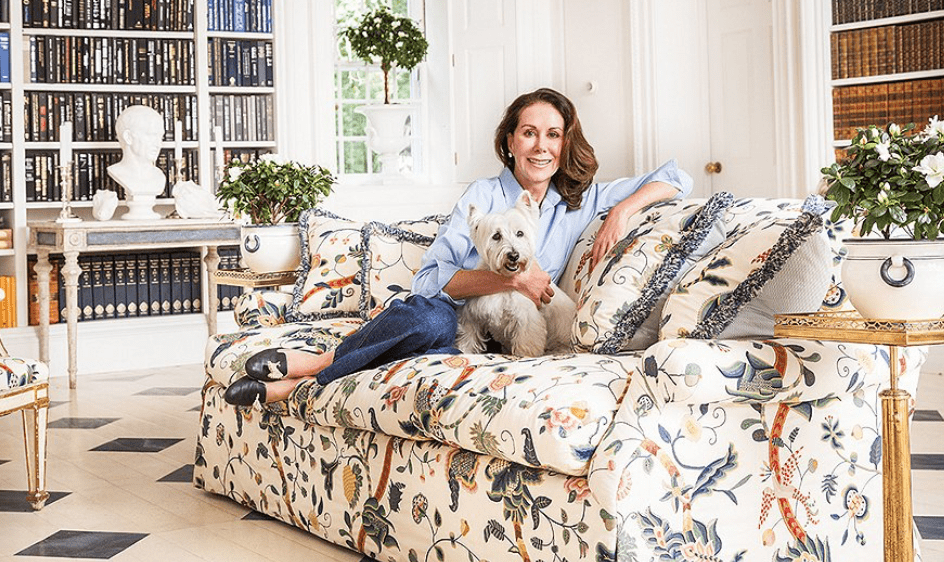 Exquisite taste is Carolyne Roehm’s trademark. The former fashion designer, who worked for Oscar de la Renta, broadened her design horizons and focused on the world of flowers, entertaining, gardens and even gift-wrapping.

She has written over 10 books on flowers – including “A Passion for Flowers” – and her knowledge and artistry in creating tablescapes has won a worldwide fan base and made her a coveted speaker.

But the Missouri born designer whose parents were teachers is most proud of proving that there are many flowers of all price points to appreciate whether it is the July flower of delphinium or a simple daffodil. 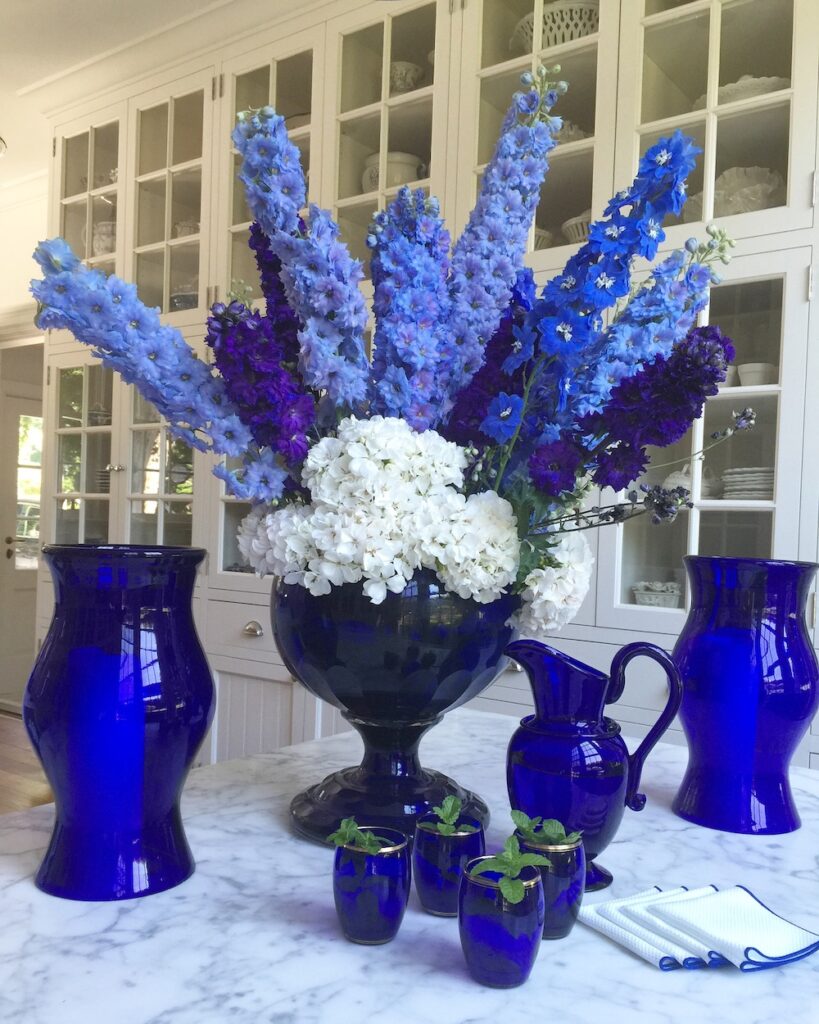 In fact, her time in Paris where carnations were appreciated, led her to introduce carnations as well as marigolds and baby’s breath into arrangements to dispel that only certain flowers were worthy of artistic focus.

“Carnations are beautiful,” she says. “They have a lovely fragrance and last forever. Americans pooh-poohed it because it’s a cheaper flower.

“But there are no such things as ugly flowers. There are only people who do them badly.”

With Roehm’s instructions and taste, all of us have learned how to appreciate flowers even more and become more skilled at not only arranging but understanding all the diverse rainbow of varieties available. 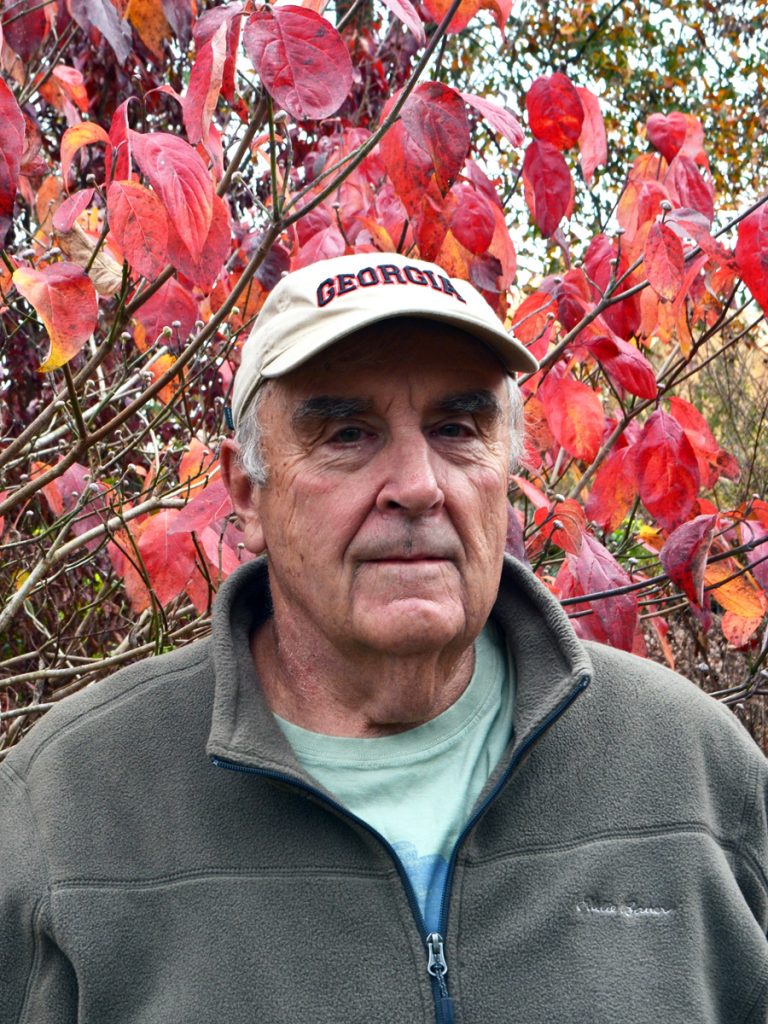 Dr. Michael A. Dirr’s lifelong passion for woody plants including our beloved hydrangeas has positively inspired generations of students from his classes at the University of Georgia as well as fans around the globe.

His teaching, research and writings have not only made an impact in educating the green industry from its infancy but helped this movement grow into a popular national trend.

His “Manual of Woody Landscape Plants” and reference books have become not only the leading horticultural text and reference work for the landscape and nursery industry but has been called the “bible” for the industry.

Among his many innovations – and there are so many – Dr. Dirr fostered the Georgia Plant Introduction Program, a program which has been widely emulated by other states.  Thanks to his efforts, over 50 new plant introductions have been classified. No wonder he won the Linnaeus Award from the Chicago Botanic Garden, named after Carl Linnaeus, the Swedish botanist and physician who created a system for naming plants and organisms.

Oh yes, Dirr has been awarded many other awards including the Medal of Honor from the Garden Club of America and the Georgia Green Industry Lifetime Membership Award.

Now he’s spending more time breeding. “I have 5,000 hydrangea seedlings on the ground, breeding for increased hardiness, reblooming and disease resistance,” he says. “Hydrangeas somehow ended up in my DNA.”

Lucky for us, soon those hydrangea strains will arrive at many American homes and bring both color and durability to people’s gardens.

As Walt Whitman wrote in “Leaves of Grass,” “Do anything but let it produce joy.”

Dirr, as well as all these other floral rock stars, have achieved that sentiment with their work and desire to educate the American public on the beauty of nature.