The Ten Prettiest Flower Garden Stars to Know- And Why

The ornamental horticulture industry just held its annual “California Spring Trials,” a five-day event where flower breeders from around the globe show off their newest and coolest flower and plant introductions to greenhouse and garden center professionals.

As a former greenhouse owner and the editor of the horticultural trade magazine GrowerTalks, I’ve been covering this “fashion week for the flower business” since 1994, and I reckon that’s why my friend Jill Brooke of Flower Power Daily asked me to share what I consider the ten prettiest flower introductions from this year’s event—I have seen a lot of pansies and petunias come and go!

My list is completely subjective, of course, but doing this for nearly three decades gives me a view of “pretty” that goes deeper than just a flashy blossom. Sure, I’m a sucker for a pretty color, too. But I also look for traits that make plants better and easier for the grower, retailer and especially you, the gardener.

Oh, a note: These are mostly introductions for 2023, so don’t expect to see them in your favorite garden center this season. Then again, keep your eyes peeled, because you never know when a smart grower might have gotten some early samples!

10 PRETTY INTRODUCTIONS ON THE FLORAL RUNWAY 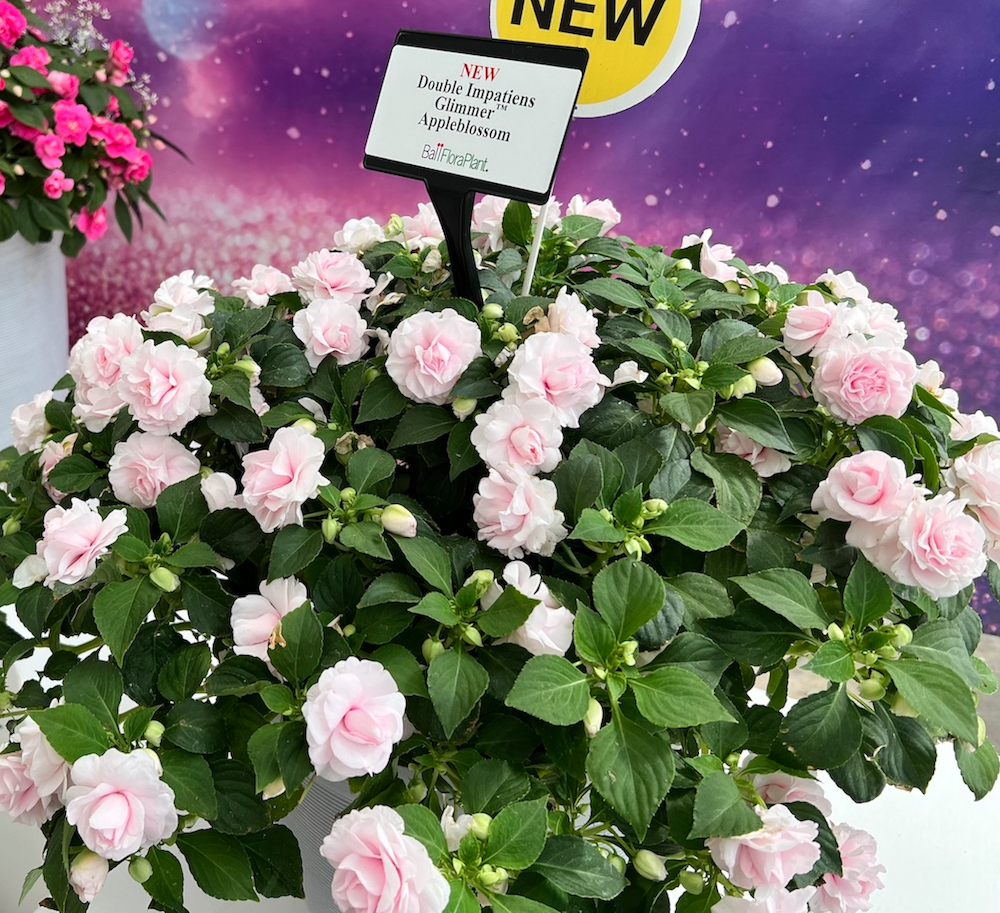 What makes it pretty? It brings double impatiens, with their rosebud-shaped blooms, back to the garden.

Some years back, a disease called impatiens downy mildew (IDM) rose up seemingly out of nowhere to almost wipe out impatiens in shade gardens around the world. IDM affected double impatiens, too. Thankfully, a smart breeder in the Netherlands found a way to breed an IDM-tolerant impatiens (called Beacon), and now they’ve bred that same IDM resistance into a double impatiens, which they’ve named Glimmer. 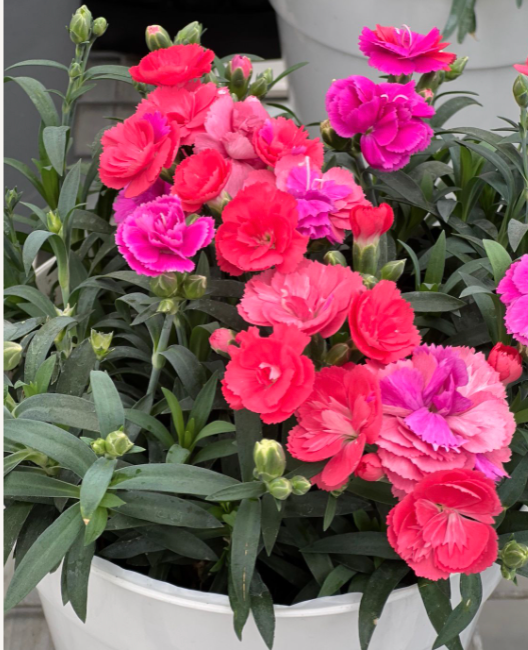 What makes it pretty? Multiple flower colors in each pot—even on each bloom!

Flower breeders like stability—meaning if they breed a flower to be a particular color, they want it to stay that color. But sometimes happy accidents happen, like with this dianthus, which features shades of white and pink and salmon and lavender and red all on one plant, and even on one bloom. It truly is a potpourri of color. 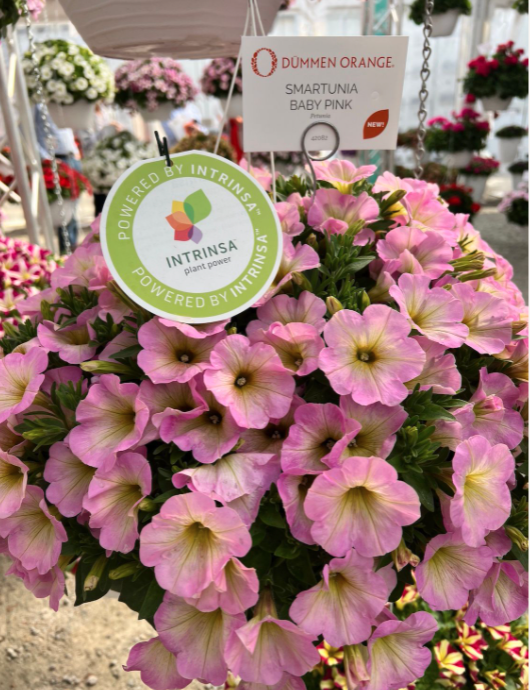 What makes it pretty? It’s the world’s first TMV-resistant petunia

Sometimes it’s what’s under the skin that makes a plant pretty. That’s the case with Smartunia, which is the first to be resistant to the disease tobacco mosaic virus (TMV). TMV isn’t as devastating to petunias as IDM has been to impatiens, but it can be problematic to growers as well as gardeners, who might not know why their plant suddenly faded away. The breeder says that by 2025 all their petunia varieties will be resistant to this disease. 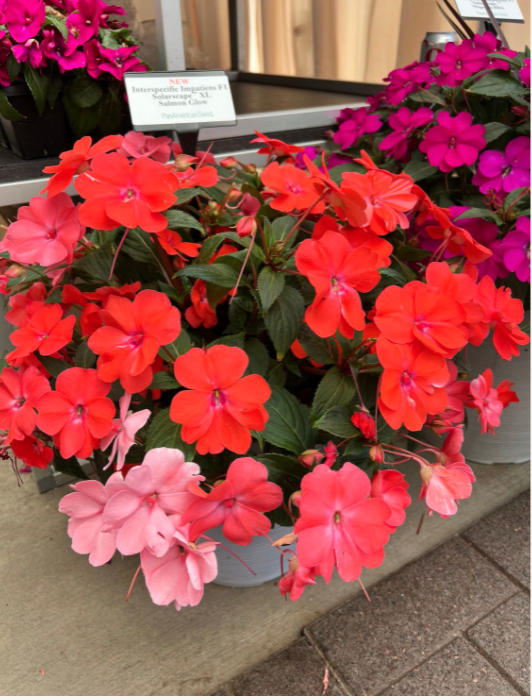 What makes it pretty? A lower price point for growers and consumers.

Twelve years in the making, this is the first sun-tolerant interspecific impatiens that is grown from seed (all other competitors are grown from cuttings). “Interspecific” means it’s got two different parents, each of which brings good traits to the garden, such as vigor and uniformity; the fact that it is grown from seed means it should be less expensive for you, the consumer. You are likely to find it available in multi-count packs and not just large pots, so you can put more of them in your garden. 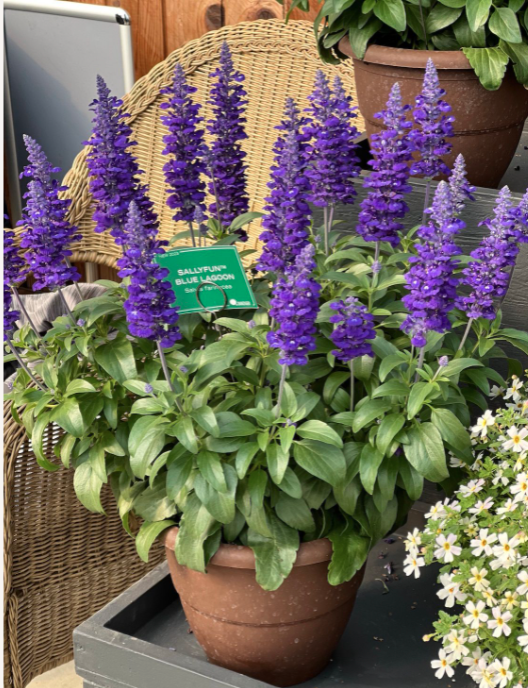 This is a Salvia farinacea, which is an extremely durable and problem-free type of salvia. S. farinacea doesn’t offer the reds and purples of the salvia you may be familiar with, but if you like blue, light blue or white, give them a try, because in my garden they look as fresh at the end of the season as they did in May. 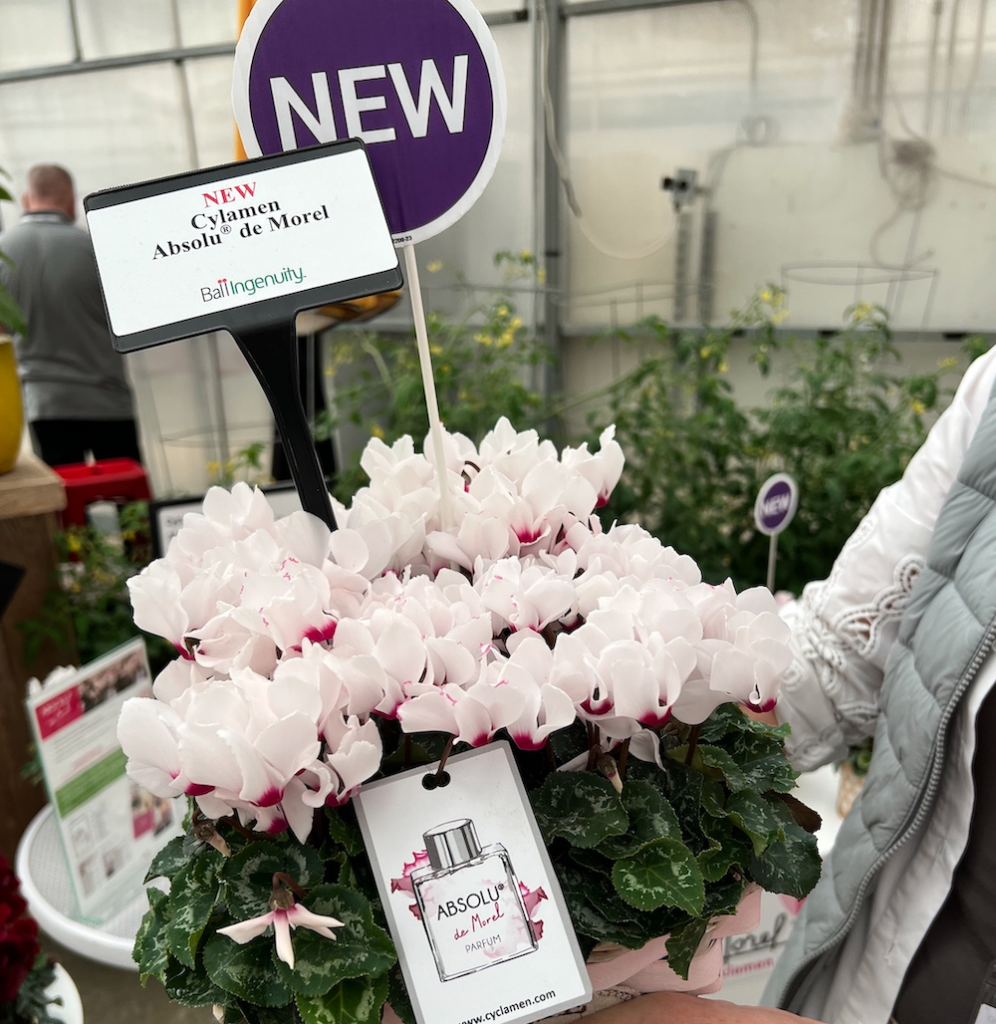 What makes it pretty? Its fragrance

It’s not necessarily true that scientists have bred scent out of flowers (at least not on purpose), but it is true that sometimes the longest-lasting flowers don’t have as much scent … it’s sort of a chicken-and-egg situation. Anyway, cyclamen do have a nice scent, although it may be very faint. Absolu de Morel has been selected by its breeder to have a much more noticeable fragrance. Flowers are white with a thin pink margin. 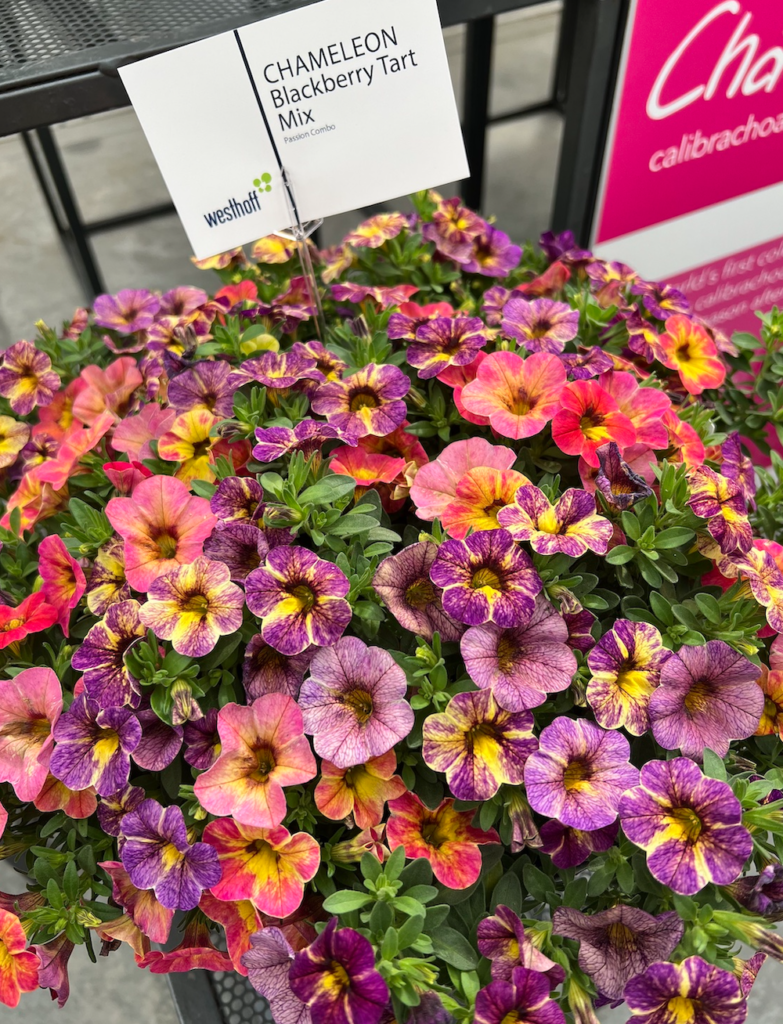 Sometimes it’s the flowers that make a plant pretty, and this mix of varieties from the Chameleon series of calibrachoas looks good enough to eat. 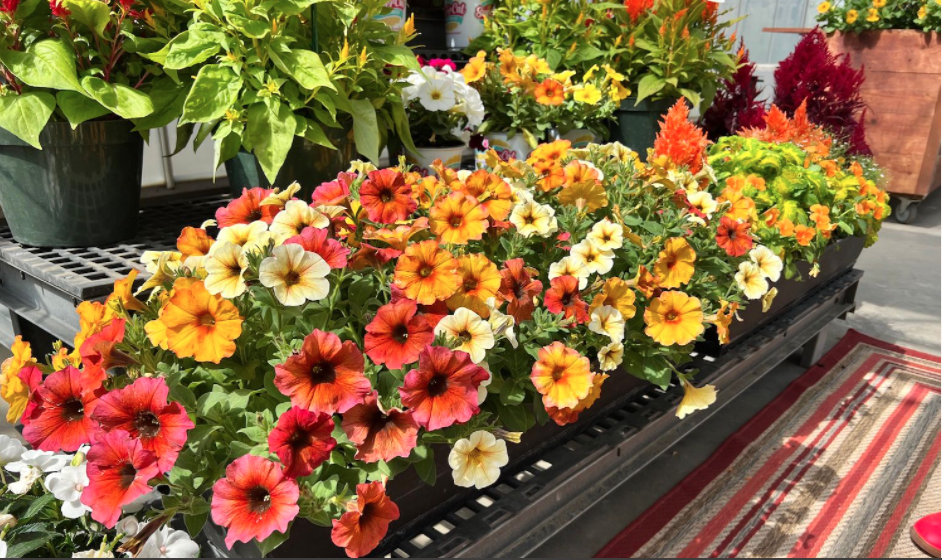 What makes it pretty? Its selection of fall colors.

SuperCal petunias, from the same breeder as the famous SunPatiens, aren’t actually petunias, they’re a petunia/calibrachoa cross—what they call a “petchoa.” That cross gives them small-but-tough flowers in colors you don’t find in regular petunias—including fall shades of tan, orange and rust. Petunias do very well in the fall, too, tolerating some frost, which is why these SuperCal colors can extend your gardening season, blending nicely with mums, pansies, kale, pumpkins and straw bales. 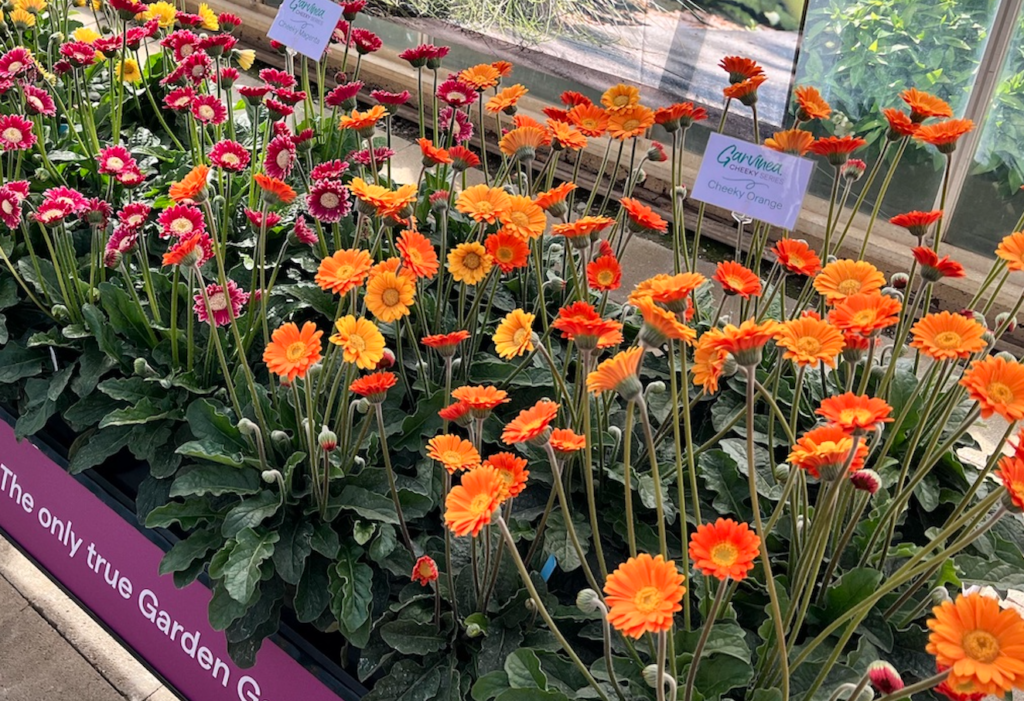 What makes them pretty? Loads of daisy flowers blowing in the breeze.

Gerbera daisies are often purchased as a houseplant or patio plant and rarely planted out in the garden, and when they are planted out, they often suffer. Not Garvineas, however, as they’re bred and selected to tolerate garden conditions, says the breeder. The new Cheeky series of Garvinea have loads of small flowers in four different colors. They’re also a bit cold hardy, to USDA Zone 7 (down to about 5F to 10F). 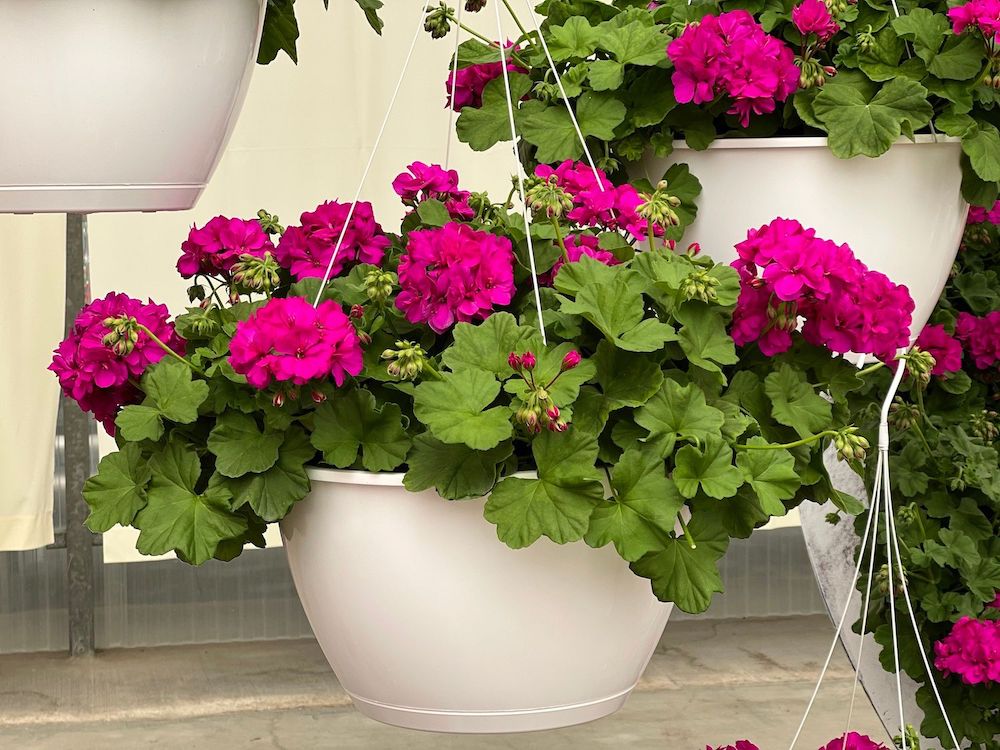 What makes them pretty? Great color on a great ivy geranium.

Unbeknownst to most gardeners, some of today’s top-performing annual flowers are “interspecific hybrids,” which I explained earlier crosses two species of a plant (such as two impatiens species or two geranium species) to create something that’s more than the sum of the parts. Calliope cascade is one such example, combining a zonal geranium and an ivy geranium to get the star-shaped foliage and trailing habit of an ivy geranium with the big, long-lasting blooms of a zonal. It’s tougher and less problematic than an ivy geranium, too, for better hanging basket and windowbox performance. (Its sister, Calliope, which is upright, with typical geranium foliage, is one of the best-selling geranium series on the market.)

That’s just a tiny taste of what’s coming from flowers breeders to your garden in 2023. For a rare, inside look at this trade-only event, watch our 30 YouTube videos at https://tinyurl.com/CaliforniaTrials22.