The Origin of the Chanukah Bush? Milton Berle and Gertrude Berg

Ever wonder where the tradition of incorporating a Chanukah Bush into Jewish holiday traditions came from?

Turn back the clock to the 1940s with comic Milton Berle and radio and TV pioneer Gertrude Berg, whose show, The Goldbergs,  originated in my house in Bedford Hills, New York.

It was around Christmas time and Gertrude Berg was recording her popular radio show at the house she lived in for 50 years.  (Built in 1790, Gov. Dewitt Clinton also lived here in 1801). Berg was known to millions as Molly Goldberg, the big-hearted matriarch of her fictitious Bronx family who moved to Connecticut as a symbol of an immigrant’s upward mobility.

I learned this story when her grandchildren came for a visit years ago.

As I was told, comic Milton Berle was joking how Jewish people love to decorate and unlike a Christmas tree, a menorah offers few options.

“I know what we will do,” replied Berg. “We’ll get a tree and call it a Chanukah bush and not have any religious items on it.”

As Molly Goldberg on both her radio and TV shows, Berg was able to introduce different traditions from incoming cultures to the U.S. following World War II. In fact, her show inspired “I Love Lucy” and she was named the second most admired woman after Eleanor Roosevelt.  Susan Stamberg, from NPR’s “All Things Considered,” called her the “Oprah of her day.”

Immigrant life and the Goldberg family struggle were familiar and relatable to many families during this point in American history. How do you assimilate and become Americans while holding on to your traditions? Her characters Molly, Jake, Sammy and Rosie emphasized day to day stories of Jewish immigration to America. Furthermore, radio created a cozy forum to share parenting stories while also sharing how people of all faiths and traditions share similar struggles and joys as Americans.

Berg wrote more than 5000 episodes for her radio and then the TV show from 1929 to 1951. The TV series is currently seen on the Jewish Life Television (JLTV) cable network.

In 2009, Aviva Kempner did a documentary, Yoo-Hoo Mrs. Goldberg: The Most Famous Woman in America You Never Heard Of , which won the San Francisco Jewish Film Festival Freedom of Expression Award. 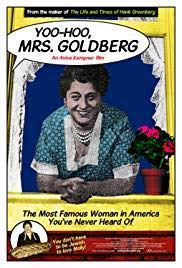 But I feel I can give Berg an award for getting my husband to agree to have a  Chanukah bush in our house. For that, I am so grateful. Molly, I love decorating festively too!  (I also am appreciative for her greenhouse because she was a master gardener of roses and orchids).

I grew up with a Christmas tree and loved the magic of the twinkling lights and colorful ornaments. But my wonderful husband felt a similar sentiment to Susan Sussman, who wrote, “There’s No Such Thing as a Chanukah Bush, Sandy Goldstein.” You can learn about and appreciate other religious traditions while maintaining pride in your own which didn’t include a decorated tree.

But thanks to Gertrude Berg, I had a compelling argument. We live in a house whose famous resident proudly was Jewish and educated people about traditions. And those traditions became flexible by adding a Chanukah bush.

Considering other people’s feelings and traditions is the spirit of the holidays. Furthermore, although 7 out of 10 couples marry of their own faith, traditions may differ. Embracing the traditions of those you care about,  shelving some traditions that don’t work for your family and creating new ones for you both as a couple is a testament to love and respect – and most importantly – togetherness.

He agreed. But I wanted him to be happy too.

Honoring his reservations, I surprised him and decorated it in such a way that it was religious – with dreidels and Jewish stars along with other items and white and blue flowers. As my brother-in-law, Brian remarked, “Ralph Lauren couldn’t have made a better tree.”  I refrained from Santa Claus decor which sparked another conversation. Orthodox rabbis weren’t resistant to these celebrations because of a link to Christianity but to its roots of a pagan deity. Whatever your comfort zone, there are many options to choose from. As time moved on and he got more comfortable, we now also have some cheerful Santa Claus ornaments. Now we also get an ornament from any family trip we take as a memory as well.

If your family does adopt this tradition, we can thank Gertrude Berg and Milton Berle for its concept. I asked if there is a recording of this mention and her grandchildren said sadly many of the show’s recordings weren’t saved and reused for other shows. Possibly, they said, it could be somewhere in the archives at the Museum of Broadcasting. Nonetheless, this great idea lives on.