We love how daffodils have been planted alongside the route of the Boston Marathon since the horrific bombing in 2013. These flowers represent rebirth and new beginnings.
Local volunteers have placed more than 5,000 pots and a total of 20,000 daffodils along the marathon route as a tribute to Boston Strong. As Megan O’Brien reported in Boston.com, the daffodils will be dispersed to businesses, doorsteps, green spaces, stores and restaurants.
Along with the flowers, people are asked to do random acts of kindness in honor of “One Boston Day.” This is an effort to transform feeling powerless to becoming powerful in values and actions.
Today is the first time the anniversary date falls on the same day as the marathon.

This year, the day of remembrance  is accompanied by a new documentary, “Path of the Daff.” The film follows one bulb, from its origin in Holland to its final destination at the front of Marathon Sports on Boylston Street, while weaving in profiles of runners, survivors, volunteers, and charities.

At the nearby Seaport Common, a garden of modern art is also on display.  Created by Brooklyn artist, Daniele Frazier, it has 20 billowy nylon daffodils measuring 20 feet tall fluttering in the sky to remind us how daffodils are trumpets for spring and new possibilities. “20 Knots: Daffodils for Boston” can be viewed until April 29th

Our hearts go out to all those who suffered. And we hope these flowers’ symbolism inspires and heals, because today, we are all Boston Strong. – Jill Brooke 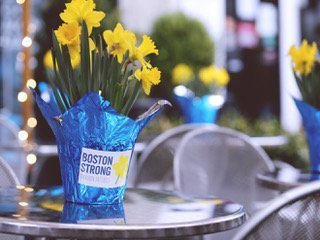