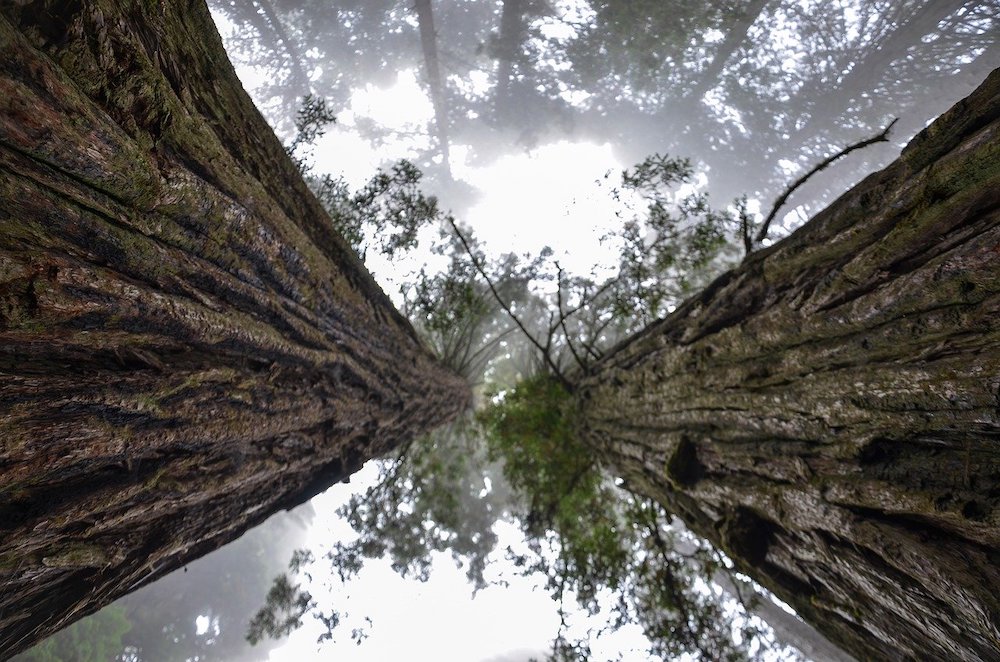 While massive wildfires in Northern California are having devastating effects, causing deaths, destroying homes and vast amounts of forests, many Redwood trees, some of which are 2,200 years old—are surviving. That’s because Redwoods have unique adaptations that make them extraordinarily impervious to fire. According to Laura McLendon, Director of Land Conservation for the Sempervirens Fund, “Their thick bark is quite fire-resistant—several feet thick in old-growth individual—and contain almost no flammable pitch or resin.”

Sometimes referred to as “nature’s skyscrapers,” these enormous redwoods are thought to be the largest and tallest trees in the world, growing to about 30 feet in diameter and 250 feet tall, some reaching heights of more than 350 feet.

“Redwoods can sprout new growth from the base of the tree, can regrow new tops when the canopy is damaged and can survive for centuries even when the entire interior of the tree—the heartwood—has been lost to fire. As long as the cambium layer survives in most of the tree, and the roots are still stabilized, the tree will likely recover very well after a major fire. Fallen trees become “nurse trees” that foster new growth.”

Scientists have confirmed one of the oldest Coast Redwood trees to be 2,200 years old. “It is likely that some individuals exist that are even older,” says McLendon. “The old-growth redwoods in Big Basin Redwoods State Park, which burned heavily, are anywhere from 1000-1800 years old. Older redwoods tend to survive fires better than younger ones, but we still anticipate many ‘second growth’ redwoods to survive this fire.”

Undoubtedly, many animals will not survive the fires, but McLendon feels there’s some hope. “We won’t know a lot of details on wildlife until staff can return to burned-over areas,” she says. “Many animals are likely to have burrowed, flown away, or ran away. Source populations from surrounding parks and wildlands will likely return in high numbers in the spring once new growth returns.”

Recent reporting confirmed that wildlife has already returned to Big Basin. “And reports from post-fire areas elsewhere in California have been very positive for wildlife: they do bounce back, they do survive. This isn’t their first wildfire and won’t be their last,” she adds..

Flowers and trees other than redwoods are victims of the blazes, but McLendon says the destruction will lead to regeneration.

“Next spring we expect to see more wildflowers than in recent memory. Following fires in other areas in California in recent years, there have been reports of huge wildflower blooms, including some species showing up that people haven’t seen in years.

With past fires, we’ve seen sword fern pop up with new leaves so quickly while everything else looks black. They have basal meristems, meaning they are totally adapted to regrow foliage after fire and will begin to “regreen” the forest.

Redwoods will also “fuzz out” with epicormic shoots that make their branches or bowls look like bottle brushes. Some mushrooms only come up after fire too, so that’s something to watch for when it rains.

Some of the wildflower species we expect to see coming back soon include Redwood sorrel (Oxalis oregana) – an extremely abundant plant in the redwood and mixed evergreen forests, often covering the ground in thick carpets.

Solitary flowers grow on small stalks and turn from white to deep pink with age. Pacific starflower (Trientalis latifolia); The aptly named Fireweed (Epilobium angustifolium) – one of the first colonizers after burns. Blue-Eyed grass (Sisyrinchium bellum) and Blue dicks (Dicheleostema pulchellum) are found in grassy sunlit areas are expected to be seen growing in the Santa Cruz Mountains coastal prairies and oak woodlands this spring. We’ll probably see a lot of lupine blooming in burned areas as well.

The mission of the Sempervirens Fund is to permanently protect and preserve redwood (Sequoia sempervirens) forests, the wildlife habitat, watersheds, and other natural and scenic features of California’s Santa Cruz Mountains. Thankfully, with these efforts and those of the heroic firefighters, new life will rise from the ashes.