Birthday Boy Pierre-Auguste Renoir and His Love of Flowers

February birthday boy Pierre-Auguste Renoir was a talented singer, but his parents couldn’t afford continuing his lessons. With that dream sidelined, he apprenticed at a factory painting flowers on porcelain.

He discovered not only his talent but a lifelong passion for flowers. “It’s with my brush I make love,” he said. Well, he made love other ways as well, the proof being a line of Renoir descendants who continued in the visual arts.

But Pierre-Auguste Renoir said, when he was painting flowers, he was able to paint more “freely and boldly without the mental effort he made with a model.” He became successful, however, for his depictions of society and the casual life of his artist friends.

Renoir’s paintings are notable for their vibrant light and saturated color, most often focusing on people in intimate and candid poses: sisters at a piano, a couple dancing cheek-to-cheek, nude women sensually lounging. In characteristic Impressionist style, Renoir suggested the details of a scene through freely brushed touches, so his figures softly fuse with one another and their surroundings. Eagle-eyed viewers can pick out the tiny flowers adorning a hat, in a wallpaper, or in a landscape.

“I am at liberty to paint flowers and call them flowers, without their needing to tell a story,” he said. Although his paintings of everyday life were popular, he also painted vases of tangerine-toned gladiolas, pale yellow dahlias, pink roses. 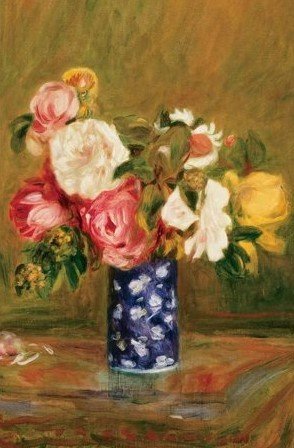 Nature gave him countless inspirations. “If you paint the leaf on a tree without using a model, your imagination will only supply you with a few leaves,” he said. “But Nature offers you millions, all on the same tree. … The artist who paints only what is in his mind must very soon repeat himself.” This is why Renoir – who was born February 25, 1841 – took pleasure in painting flowers of so many different types and colors. He even sometimes used clear vases, to paint reflections on the glass and play with glimpses of the stems. Portraits required two eyes and a nose. With flowers, his creativity could roam and his riotous colors could spread like a bonfire across his canvas.

His floral paintings remain some of the most popular artworks in the world. Flowers, as he said, make people happy. You might also enjoy this short documentary on his life.

“To my mind, a picture should be something pleasant, cheerful, and pretty, yes pretty! There are too many unpleasant things in life as it is without creating still more of them.” Renoir