The Best and Prettiest Succulents to Know and Grow 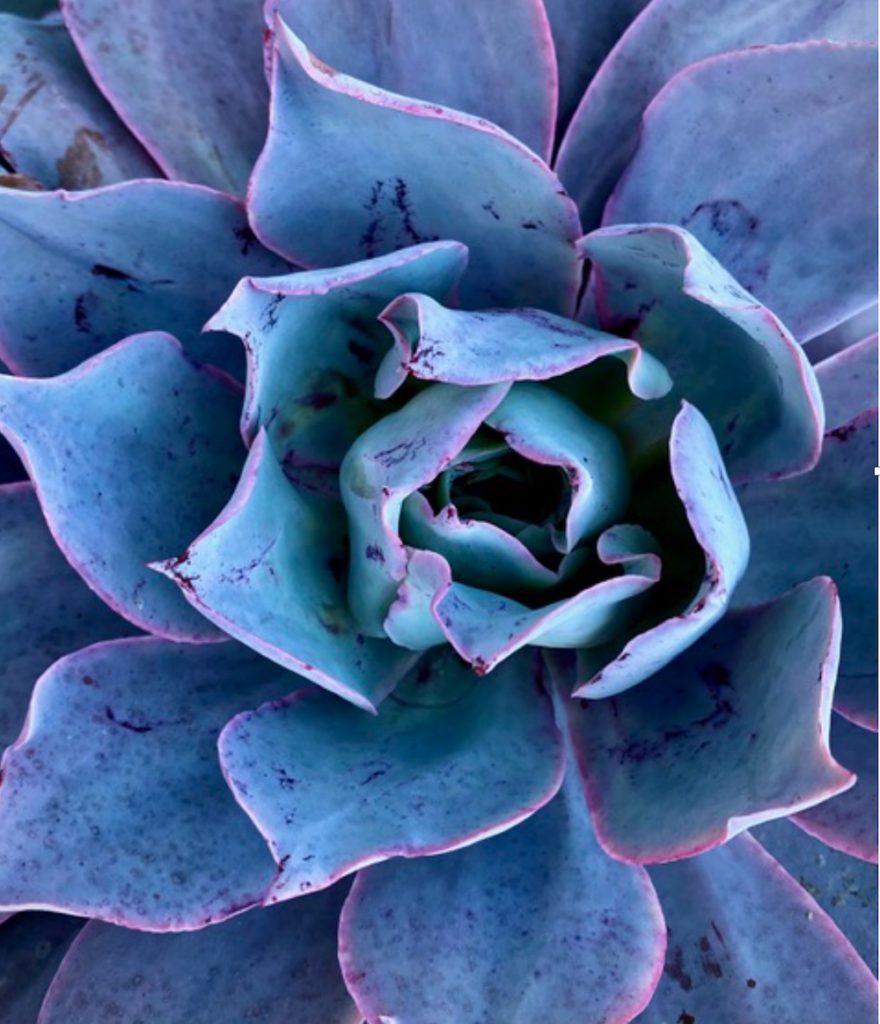 If you’re looking for a relationship with a low maintenance, beautiful and very forgiving plant, you might want to try growing a succulent.  Sometimes referred to as the “camels of the plant world,” these drought-resistant beauties store liquid in their fleshy leaves, stems and roots, making them easy to care for because they only need to be watered once a week in hot, dry places and even less often in more humid environments. In fact, one of the few things that can actually harm succulents is overwatering.

Succulents are visually vibrant, with leaves that often have spectacular colors and/or form rosettes so that the leaves themselves look like flowers.

The “Afterglow” Echeveria (above) forms large rosettes 12 to 16 inches wide, with leaves in hues of blue-green and/or purple, tinged with pink along the edges. The plants eventually send out large flower stalks that produce plentiful bright pinkish-red bell-shaped flowers which can last for weeks. (below) 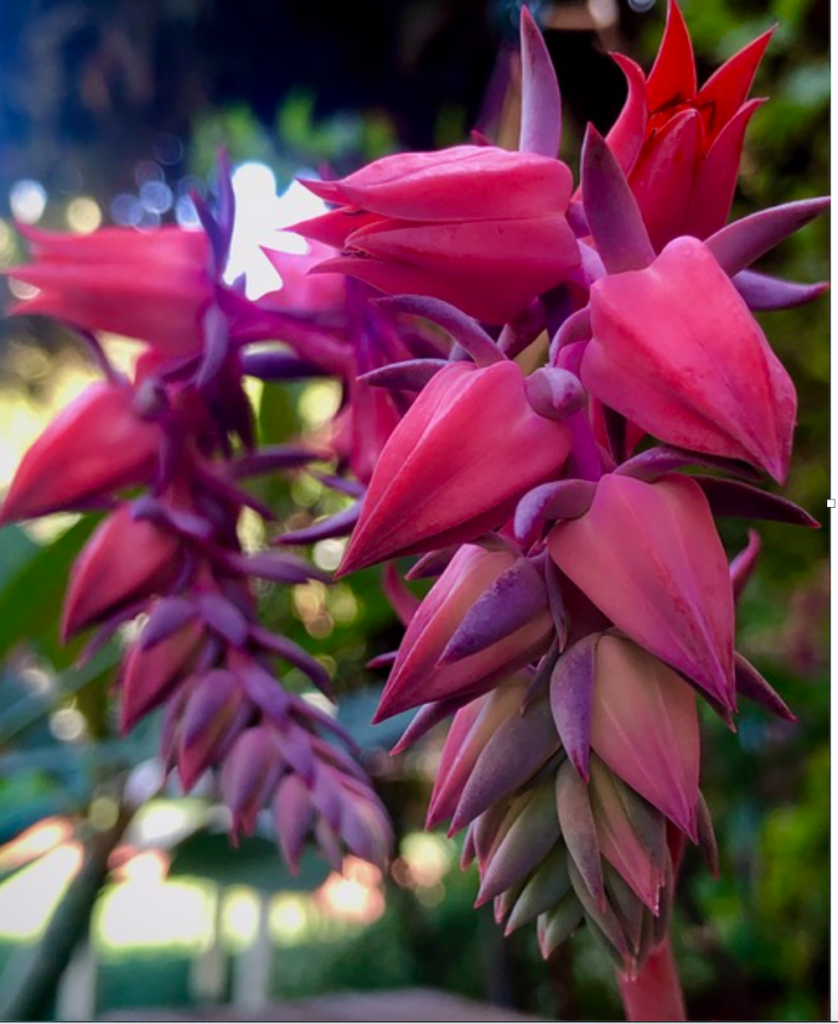 There are at least 150 species of Echeveria, which are native to remote, mountainous terrain from Mexico to Argentina. 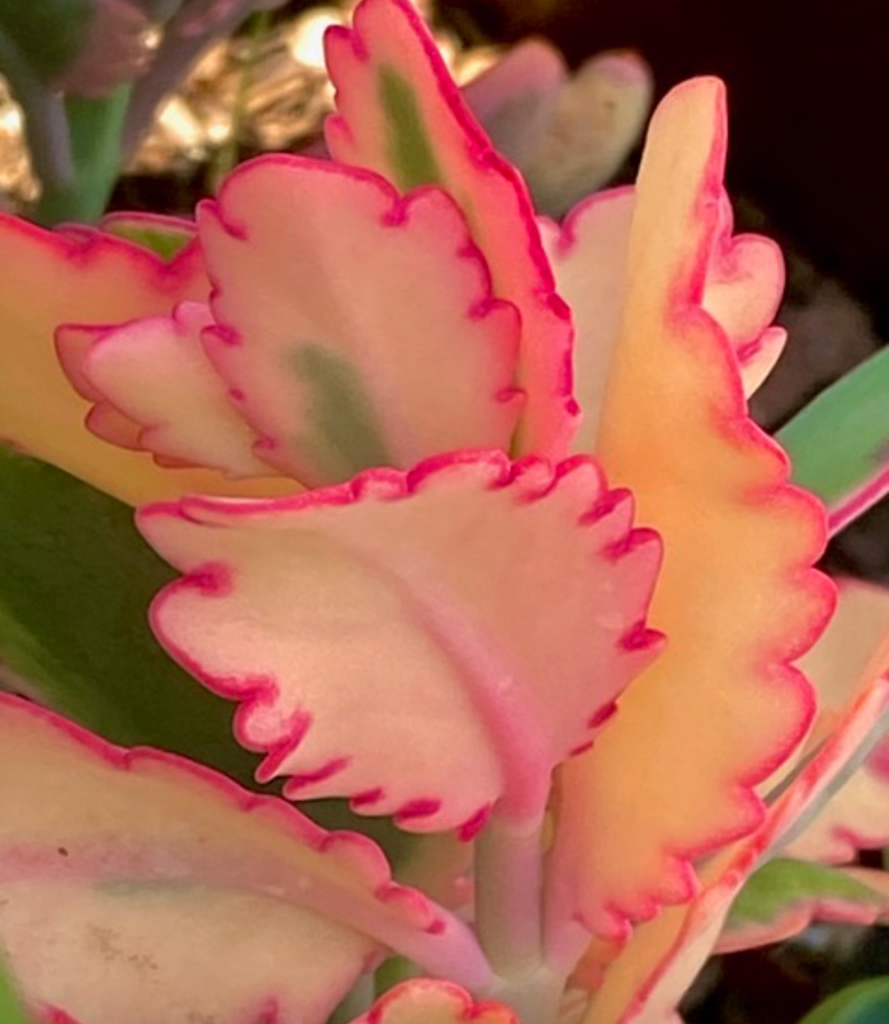 Displaying a dazzling array of colors, the Aurora Borealis Kalanchoe Succulent is named for the earth’s natural polar light display “Aurora Borealis.” The scalloped edged leaves, change color depending on the temperature, sunlight, soil dryness and time of year. They are super easy to grow: a small cutting will easily root and spread to become many plants. It can also produce tiny offspring “plantlets” in between each scallop of its leaves. 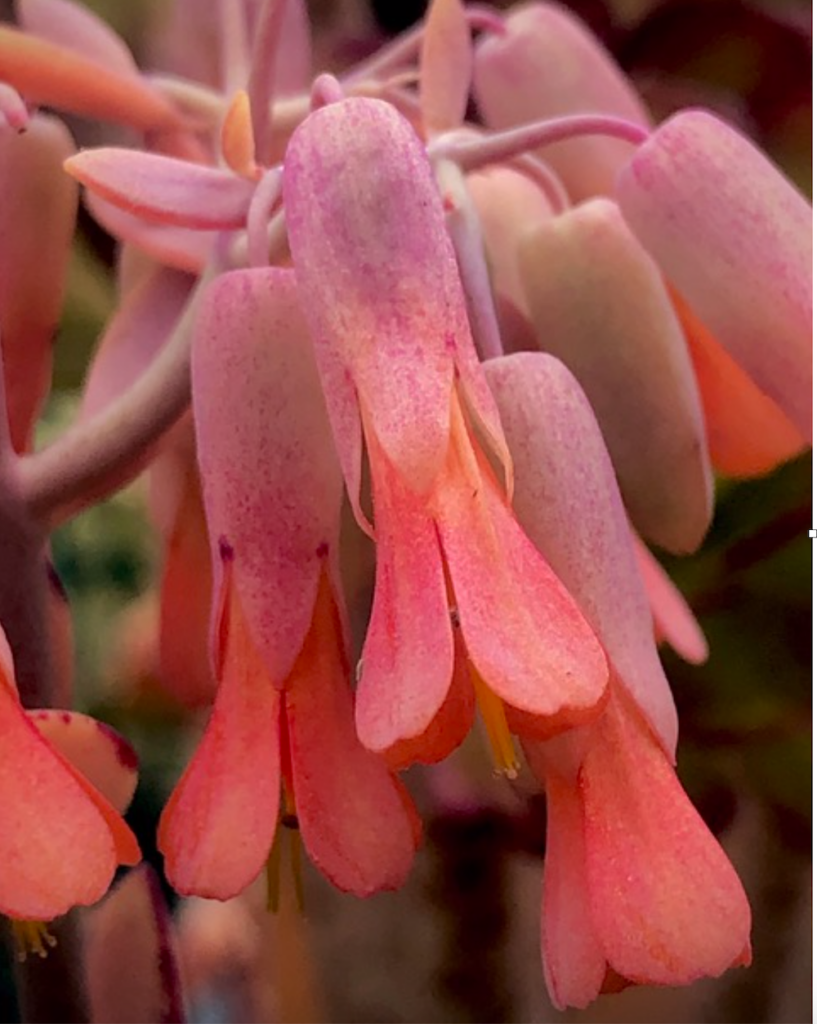 Most of the 120 species of Kalanchoe are native to Madagascar and tropical Africa. Many species, like Aurora Borealis, grow actively in the winter when they will produce bunches of long-lasting, exquisite, dangling orange flowers. Kalanchoe does well as potted houseplants in colder climates as long as they receive plenty of sun. 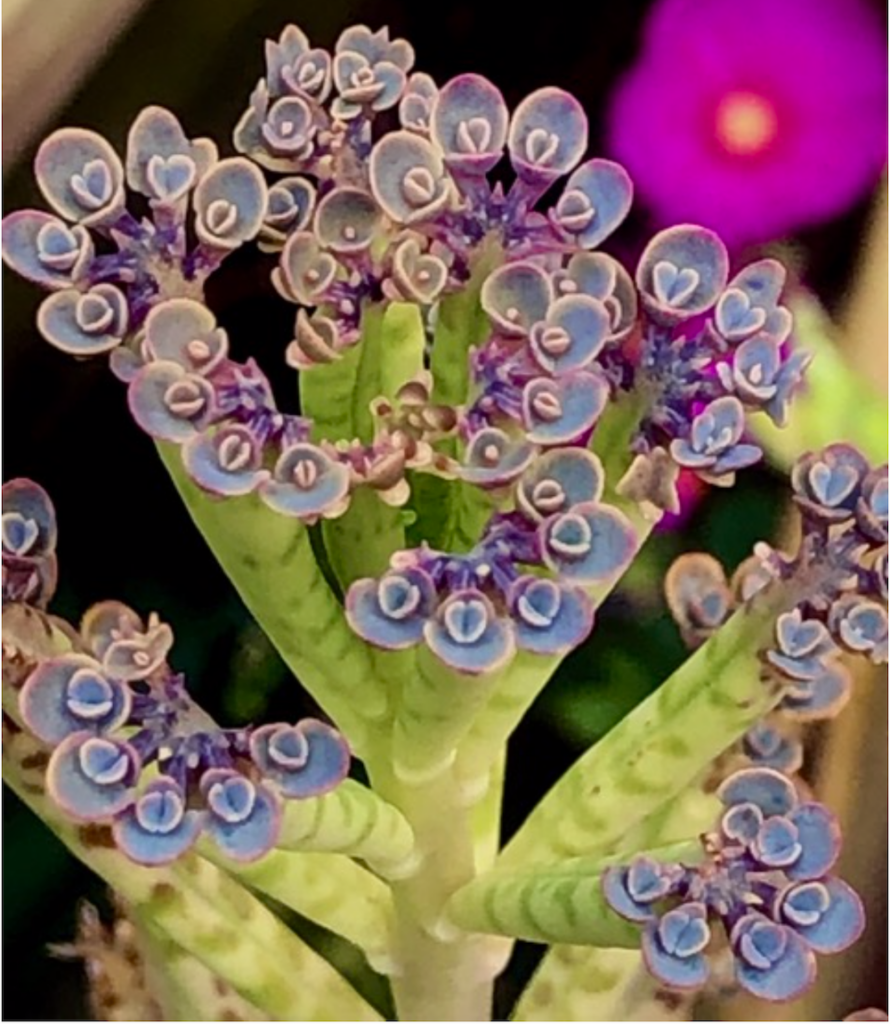 The “Mother of Millions” Kalanchoe Succulent earns its name for producing countless “plantlets” on the tips of its leaves. This plant is sometimes considered invasive because the plantlets scatter and take up residence wherever they land, becoming a new plant. 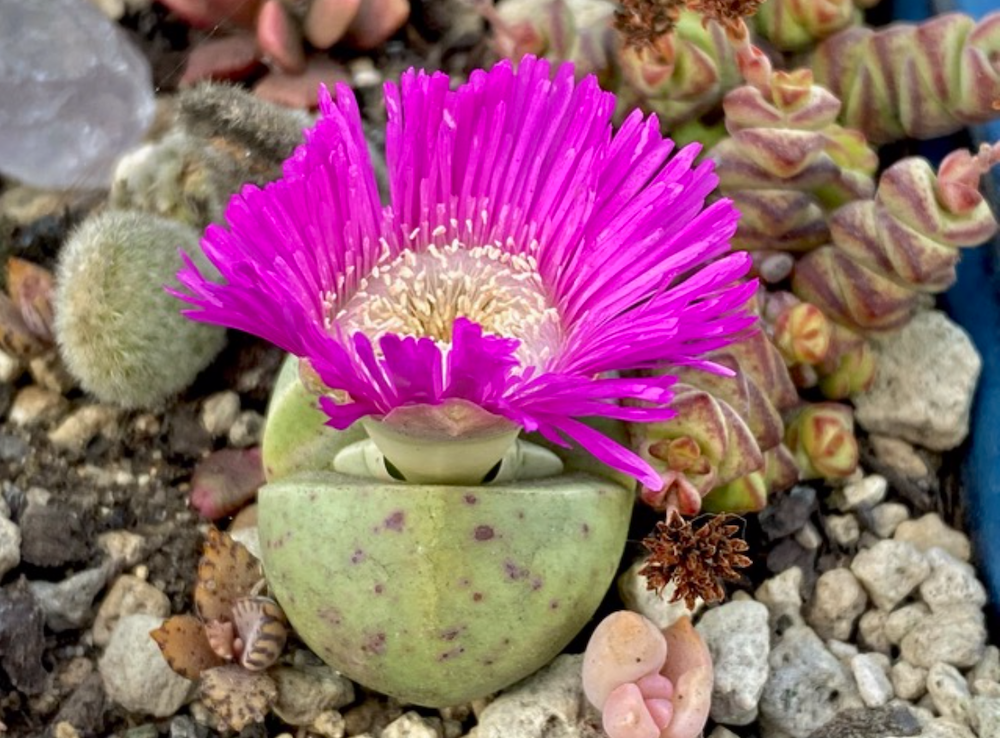 The Split Rock Mimickry Plant, (Pleiospilos Nelii), is so named because when it is not flowering, it resembles a pebble or a rock. This cute little sun-loving succulent never grows to more than a couple of inches and never has more than two to four leaves. As a new pair of leaves grow from the split in the center of the plant, the outer pair of leaves will just shrivel up into nothingness. 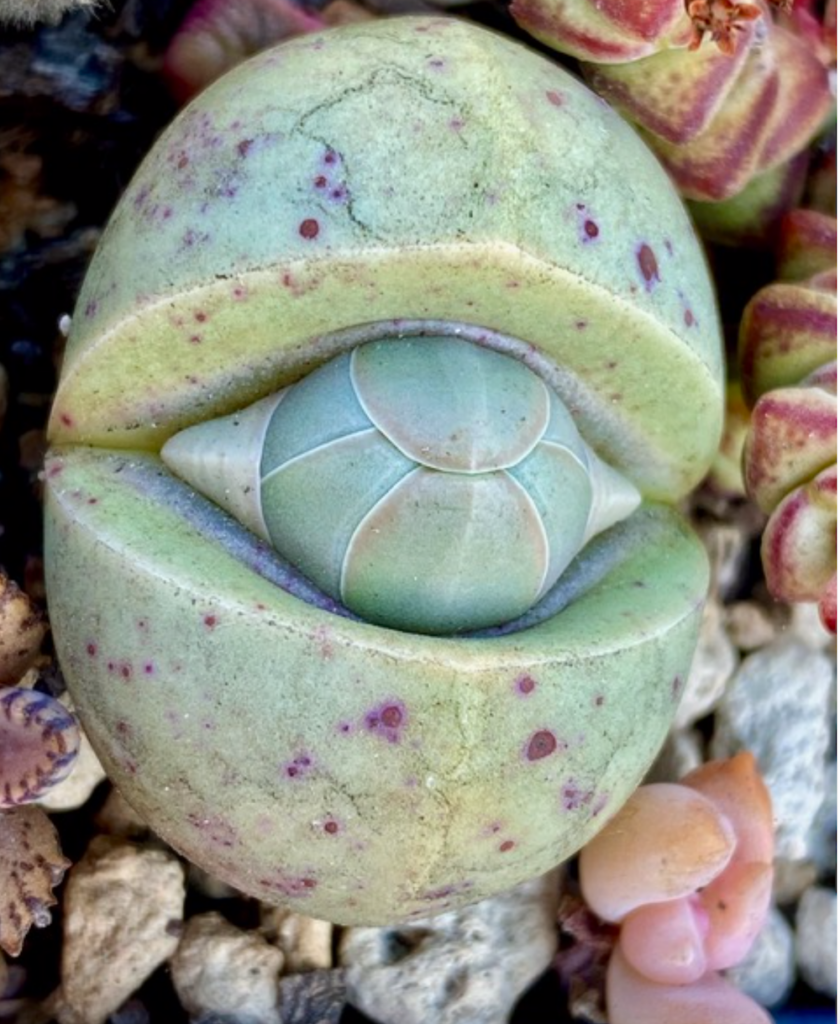 When the Split Rock is forming a flower, it initially looks like an alien head is growing out of the center, before blossoming into a flower as large as 3 inches—equal or larger in size to the entire rest of the plant! 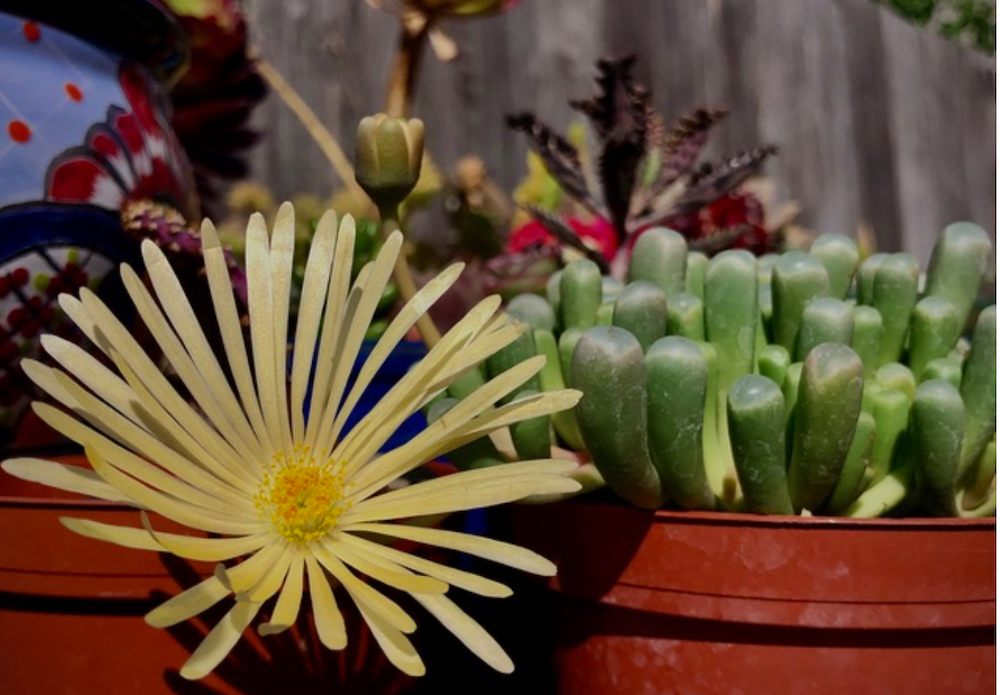 Another type of Mimickry Succulent is called “Baby Toes.” With leaves that look like the cute digits on the foot of an infant, Baby Toes Succulents (Fenestraria rhopalophylla) have clusters of cylindrical leaves with flattened tops. Native to Namaqualand, which covers parts of coastal Southern Africa including Namibia, these plants don’t grow more than three to six inches and produce daisy-like yellow or white flowers late summer to early spring. 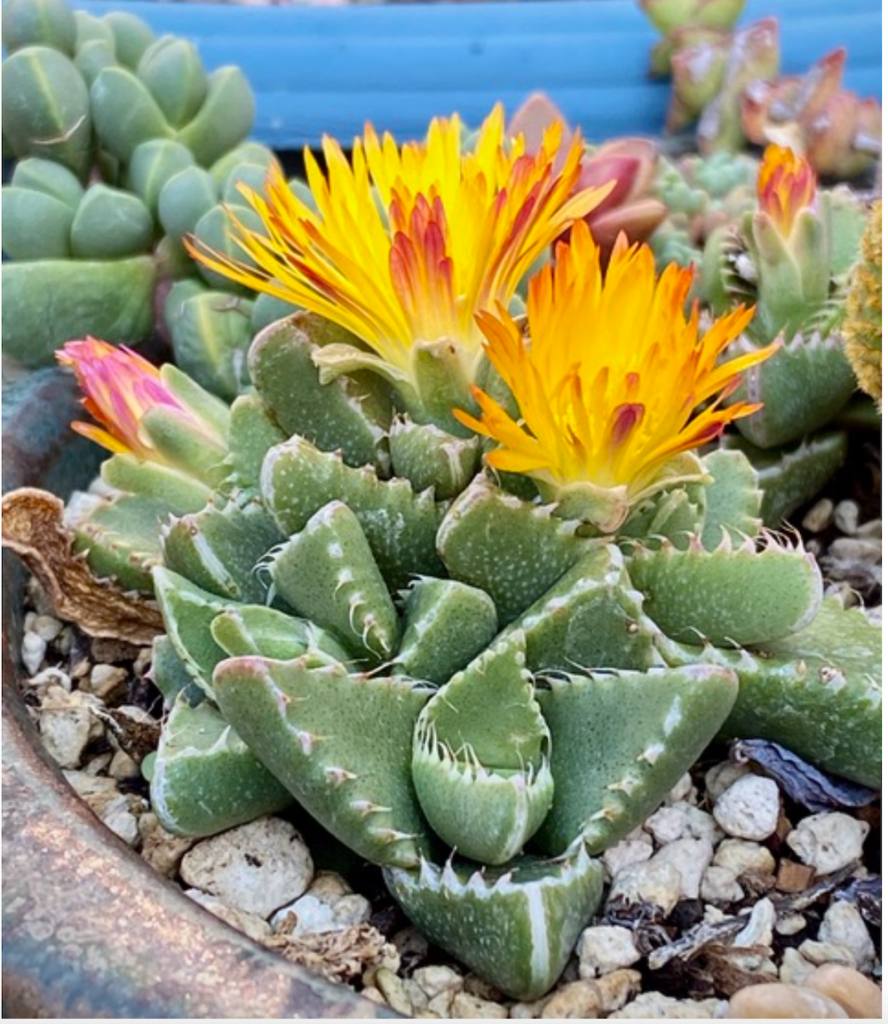 Tiger Jaws or Shark Jaws—you can choose which to call these spiky leaved, slow-growing succulents, which are native to Eastern Cape province in South Africa. These small plants only grow a couple of inches high and expand sideways through offsets during their spring to summer growing season. When planted outside or otherwise get enough sunlight, they may display orange-tinged yellow flowers in the fall. 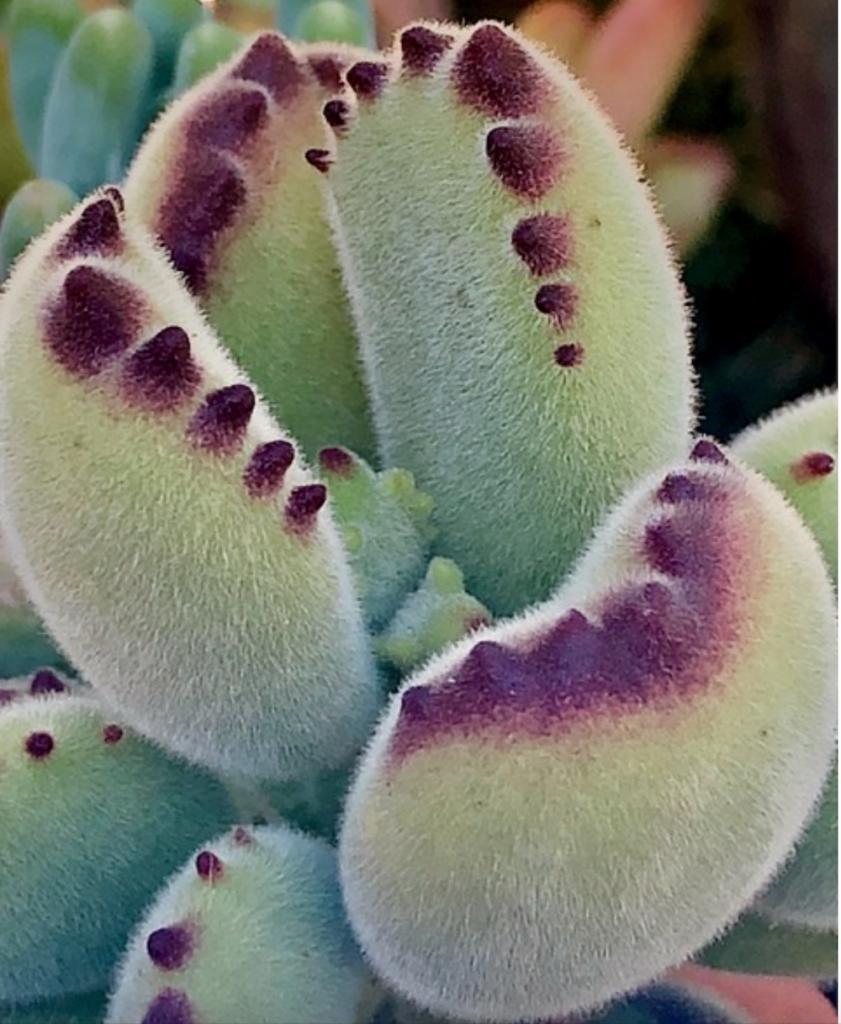 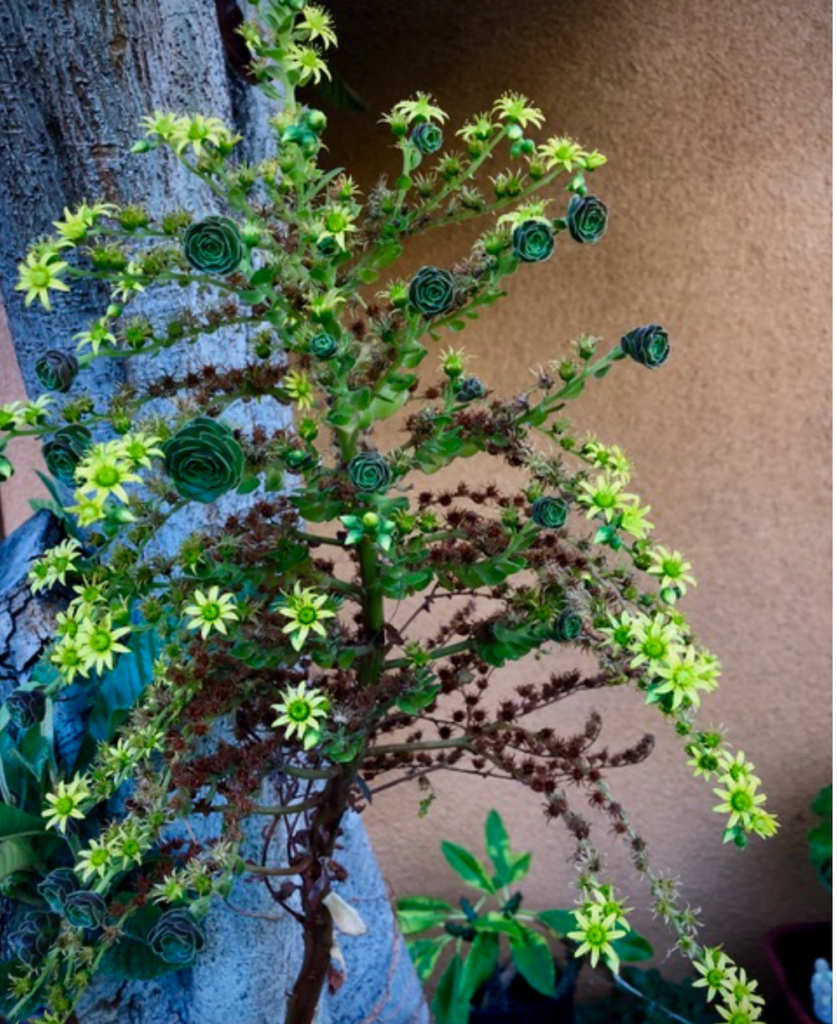 The Tree Aeonium (Aeonium arboreum) has about 35 different species. Common names include Pinwheel Desert Rose, Houseleek Tree and Irish Rose. Most species are originally from the Canary Islands off the west coast of North Africa. Tree-like in structure, their waxy leaves form rosettes. Aeoniums produces an abundance of yellow flowers late winter through early spring.

These plants are extremely easily propagated through cuttings. 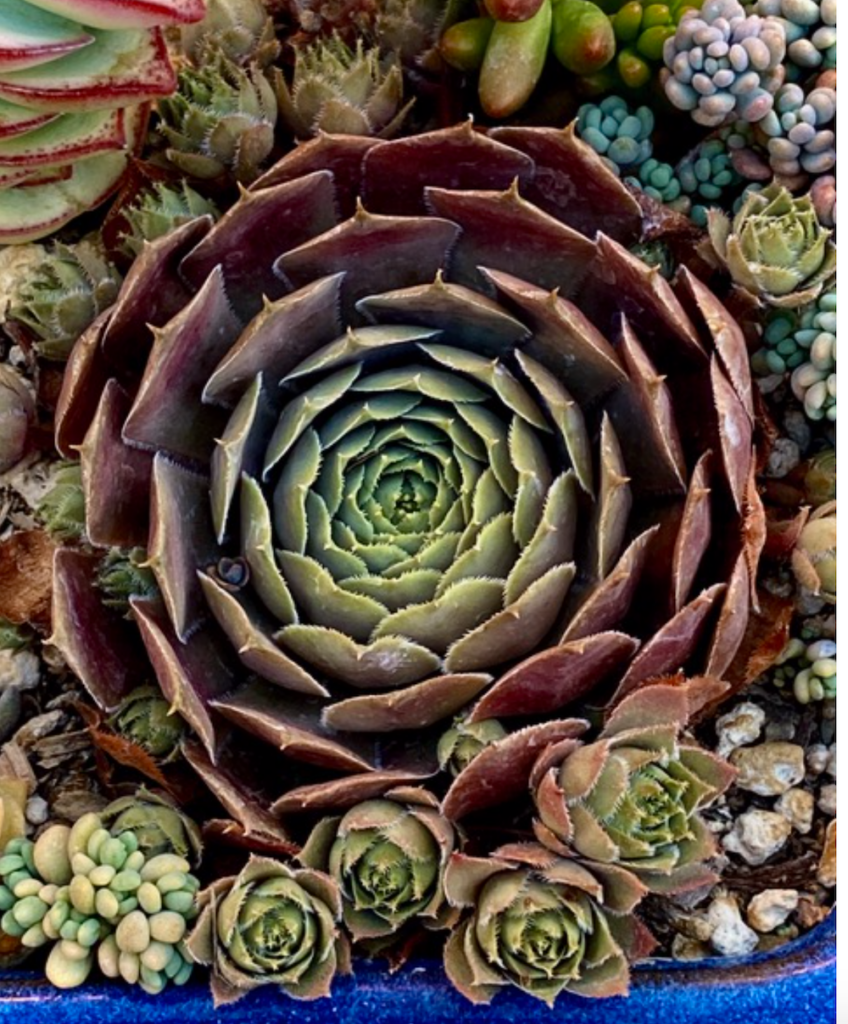 Another rosette-forming succulent is the Common Houseleek (Sempervivum tectorum), which is often called Hens and Chicks. The original rosette, referred to as the “hen” surrounds itself by producing vegetative offsets called “chicks”– multiple small rosettes. As each “chick” get large enough, it can be plucked and replanted to become a new hen to its own family of little chicks. 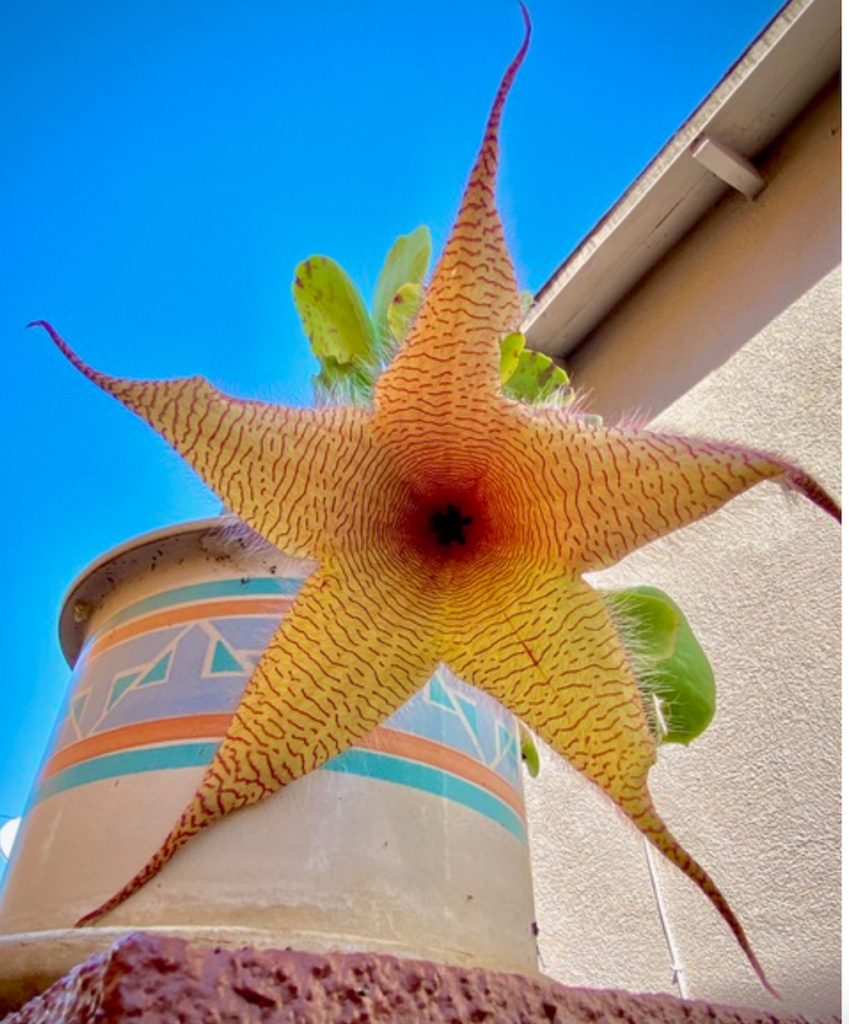 The Zulu Giant Carrion Plant (Stapelia gigantic), also known as Starfish Cactus, has one of the largest flowers in the plant kingdom; the five-petaled, star-shaped blossoms may spread almost ten inches. Native to regions of South Africa to Tanzania, the wrinkled, silky-textured flowers of yellow and red are tinged with hairs that can grow close to a third of an inch.

Cactus are their own sub-category of succulents because they are distinguished by their prickly spines and rarely have leaves. The Zulu Giant Carrion is a succulent, not a true cactus, despite its nickname, because they are soft-stemmed without spines or thorns. 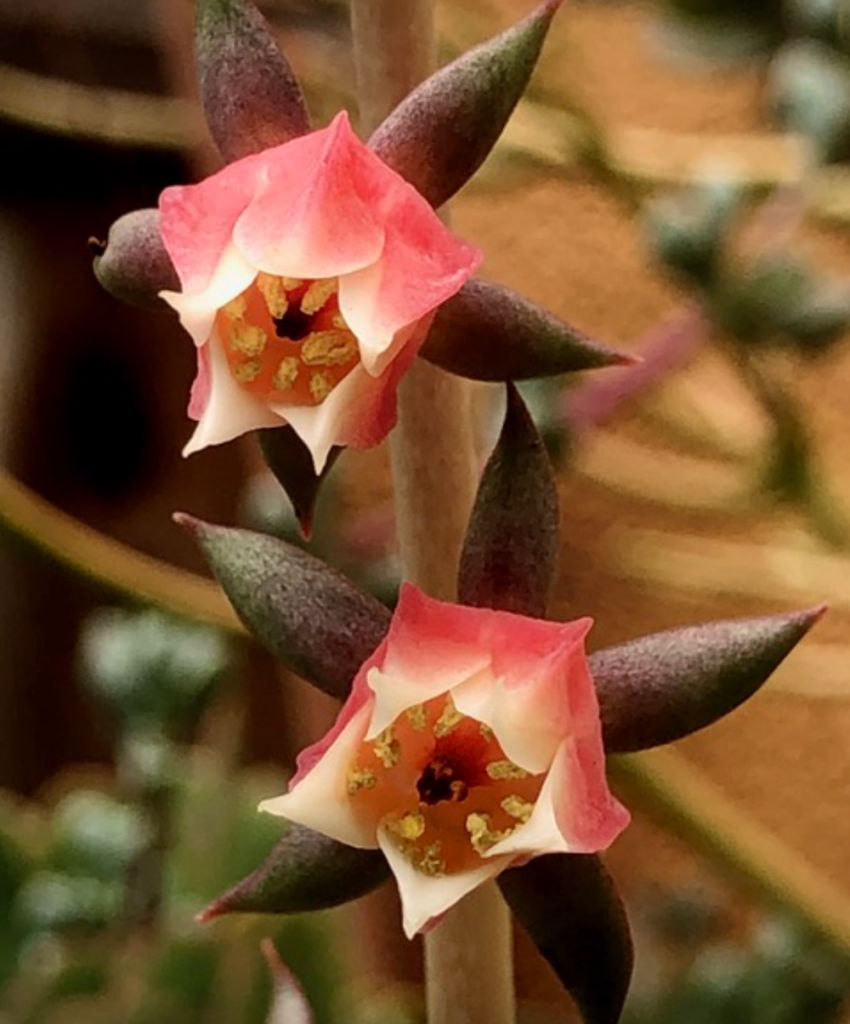 These are just some of the 10,000 known succulent species from around the world. They grow best in porous, sandy soil, so you can either buy soil specifically mixed for cactus and succulents, or just mix sand and/or some perlite in with regular potting soil. Just remember–don’t overwater them, and you, too, can have a rewarding relationship with these beautiful plants.